April 17-20 found me birding on the coast of north-central Veracruz state, Mexico. Flying to the small city of Poza Rica via Mexico City, I rented a car and drove about a hour eastward and discovered that this tiny coastal resort village is a booming metropolis during Semana Santa, the week following Easter. No worries – the birding I intend on doing will take me outside the town.

I've been asked to guide a client here for 2 days, and since I've never been here, I came down two days early to find areas of accessible habitat. The area is mentioned in Steve Howell's birdfinding guide to Mexico, but birders have found that the habitats closest to town aren't as good any more.

Using Google Earth, I was able to discover some new birding areas nearby, and by talking to many ranchers gained access to land that had never been birded before.

My client's target birds included several found in wet cattail and grass marsh, such as Yellow-breasted Crake and King Rail. Unfortuantely almost everywhere the marsh was dry. Channels had been dug to drain much of the marsh to create areas where cattle could graze, and almost everywhere one could walk right up to impenetrable cattails without getting wet feet.

We did manage to get some good birds, such as Sedge Wren, Swamp Sparrow, and Upland Sandpiper, and with the many migrants and tropical residents I tallied a total of 206 species in four days. In the meantime, I managed to take a few photos of the habitat, critters, and flowers. 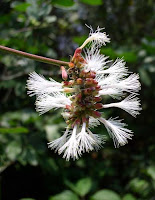 An unknown bush or small tree in the Mimosaceae family. 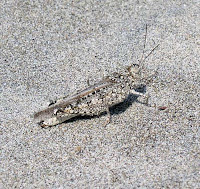 A band-winged grasshopper that found safety in open sand through camouflage.

I drove through the Rancho La Isla de Santa Maria. 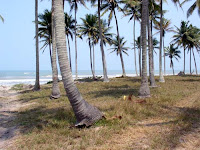 The road eventually dumped me out on the beach 10 kilometers north of Tecolutla in the middle of a coconut plantation.

I then drove south on a road that paralelled the beach and found some nice shorebird spots. 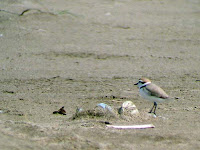 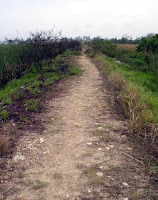 Near town is this raised dike that still had some wet marsh on both sides; this is where we finally caught up with Altamira Yellowthroat.

Another private ranch called El Cacahuatal gave me permission to bird this fantastic marsh that was teeming with shorebirds, including American Golden-Plover, lots of yellowlegs, Pectoral, Stilt, and Least Sandpipers, White-faced Ibis, and many herons and egrets. 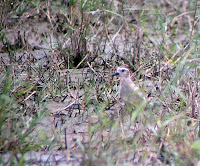 A swamplily in the genus Crinum.

Rose-bellied Lizard, Sceloporus variabilis. Rarely can you see the belly so well. 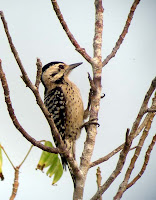 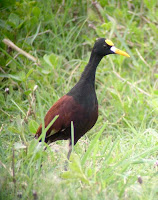 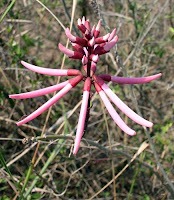 Bullhorn Acacia, Acacia cornigera. This plant is well known for the Pseudomyrmex ants that live in the hollow spines and protect the plant from grazers and caterpillars. They also kill seedlings of plants around the base that might compete. 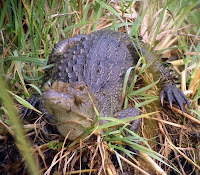