Today was amazing. Tons of birds, a few pretty cool butterflies, outstanding mammals and an incredible day for frogs. I’ll try to recount it slowly, as it tends to want to come out all at once.

First thing after breakfast, we all hiked the 6 minutes to the canopy platform that belongs to this lodge. We had to reserve this day, as there were several other couples and small groups staying here, and it’s best if you don’t have to share the limited space with others, especially non-birders. As it was, the nine of us were plenty, though a few more could fit.
It’s very much like the Tambo Blanquillo tower, built into a giant Kapok tree, but perhaps not quite as high. That one is about 150 feet high (still quite a bit shorter than the Cristalino Jungle Lodge tower), while this one is maybe 130 feet. This one is also perhaps a bit better for birding, as you have closer rainforest canopy in all directions, while the other is bordered on one side by a cocha, and therefore a large expanse of open sky.
This is Paul Cozza, and below is the small stream that courses through the lodge property. 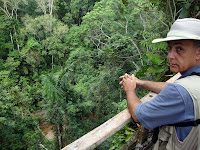 We had an amazing mixed flock pass through here, with such great birds as Yellow-shouldered Grosbeak and Chestnut-shouldered Antwren, as well as Paradise, Green-and-gold, Opal-crowned, and Yellow-crested Tanagers, Sclater’s Antwrens, Rufous-tailed Foliage-gleaner, and too many others to remember. It was mayhem trying to get everyone on every species, and in the end, it’s just not possible. The whole troop moves through too quickly, each bird flitting and scrambling through the foliage.
One bird that was on territory here was this Lawrence’s Thrush.

Rather than sing a song of its own invention, it’s a master mimic. Its song consists of short phrases (of ½ to 1 ¾ seconds) that it has borrowed from birds throughout the rainforest, from Slate-colored Grosbeak to Slate-colored Hawk. I recorded the bird in our tree for 5 minutes, during which it averaged 15 mimicked phrases per minute. And by the time five minutes was up, it was still doing birds that it hadn’t done during that time, though some it had repeated 2 or 3 times. One Lawrence’s Thrush in Bolivia was recorded and documented to have learned the vocalizations of 75 species. Here’s a short cut of our bird.
A very distant, but clearly colorful bird was this Spangled Cotinga. This is a Turtle Ant, genus Cephalotes, totally harmless. I don’t think they even have a biting apparatus. They just bumble around like turtles, and nothing bothers them. 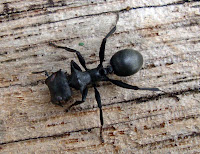 A real nuisance up in the canopy were these stingless bees (this one on my wrist), in the genus Trigona.

There are several species of stingless bees, and the smaller ones have the annoying tendency to fly into your eyes. They are totally harmless, even though they are in the same family as honey bees, Apidae (but different subfamily, Meliponinae). People often call them “sweat bees” because they are after your sweat, but that names is already occupied a totally different family of bees, Halictidae. It’s like calling a Fan-tailed Warbler an antbird because it attends army ant swarms. Yes, it’s a pet peeve of mine. Just ask me about sand flies…
After the huge mixed flock moved through, I decided I had more to learn by wandering the trails I hadn’t been on yet, rather than continue with the group led by Gary.
First I returned to the lodge to freshen up (its seems to be getting hotter and more humid, though that could barely be possible).
Here’s a photo of the front door of the cabin that Tom and Sharon had, Carachupa. All cabins were named after trees or animals, and this one means Armadillo (a transliteration would be “suckface”).

I chatted with one of the very friendly groundskeepers, Egdaver, and then wandered over to the river to see what was around. Below was this Drab Water-Tyrant. 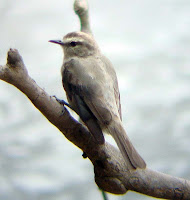 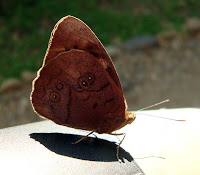 When it flew, it looked like a purple orb darting back and forth. 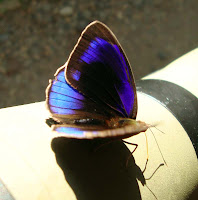 Later in the afternoon, I hit the trails again and made my way to the Fig Pass Trail, and followed it out to the Lookout. I knew it might take a while, so I brought my headlamp.
In some areas, the trail passes through some swampy forest. It’s relatively flat and the soil not very permeable, so it doesn’t take much for stretches of the trail to become very muddy. While here we always wore rubber boots. 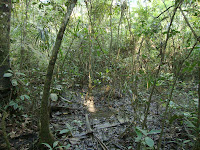 In other areas, it was nice and dry. Different birds could be found in each area.

This lovely, delicate palm is one of my favorites, Euterpe praecatoria. The fruits of a closely related species are the source of the Brazilian drink açai. 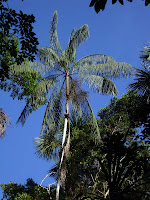 There were some butterflies in the forest understory, such as this metalmark under a leaf, Nymphidium acherois. 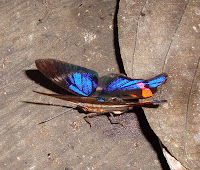 And this is the Malea Sister, Adelpha malea. 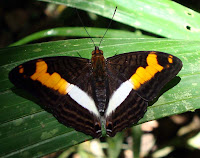 No kidding, my favorite event today up to now was this Pachitea Robber Frog, Pristimantis toftae. 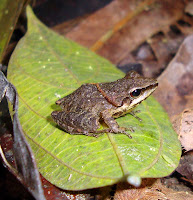 Here’s why: At first, I was simply trying to record the call notes of this frog. In case you haven’t tried to find a calling frog in the forest understory, it’s almost impossible. Their call notes call from here, there, and everywhere, and triangulation is only possible from close range. But when you get that close, they stop calling. So I recorded it, played it back with the weak speaker on my Olympus LS-10 digital recorder, and the thing eventually jumped out at me. This tiny frog, less than an inch (maybe 15 mm) was ready to attack. So getting a good recording and a photo of the same critter, clinching the id (just short of getting a DNA sample analyzed) was a major coup. Totally awesome. Here’s a clip of one of the very distinctive songs (must be a record in length for this genus, as most are monotonous tinks).
Just before I began recording the frog, and not wanting to make any sudden movements, I heard some grunting from behind me. I turned around slowly to see this Tayra about 30 yards away, 20 feet up in a tree. I managed this one digibinned photo (my small point-and-shoot held up to my Zeiss 8x42 binoculars). If you can’t tell from the photo, it’s a very large, tropical weasel. 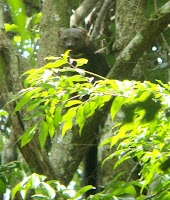 On my way to the lookout I heard a Saddle-backed Tamarin (a tiny monkey) and got some good recordings of its voice. I also recorded Band-tailed Manakin, another White-chinned Woodcreeper, and Bartlett’s Tinamou and heard some more familiar birds such as Scaly-breasted Wren and Variegated Tinamou. This latter bird calls so infrequently (once an hour?) I still have never recorded it.
Here is a view of the Madre de Dios River from the overlook just before sunset. Such a beautiful, peaceful place. 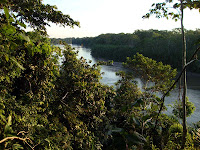 I lingered on the trails and walked a bit further “inland” until I heard my first night bird – an Ocellated Poorwill. Bird #112 for the day, and no water birds at all.
Then the frogging started. As I walked back to the lodge to be in time for a shower and 7:00 dinner, I noticed eyeshines in the trail. Especially in the muddy spots there were frogs. Sadly, I did not have recordings of their voices to go along with the photos, so figuring out which species they are is a challenge.
These next four may all be the same species of Leptodactylus. 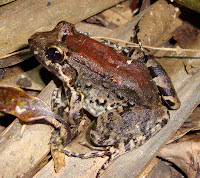 But this Leptodactylus frog is definitely a different species, possibly L. didymus, judging from how common it is in the area by voice. 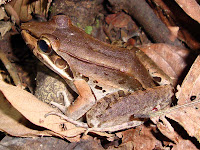 These three are probably all the same species of toad, Rhinella margaritifera, even though they all look quite different, with variation between individuals and age. I actually photographed a couple of these in the morning. 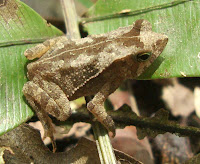 This last photo is of a treefrog in the genus Osteocephalus, a notoriously difficult group, though only two species should occur here, O. taurinus and O. pearsoni.

Ah, but I’ve saved the most exciting find of the day for the end. I’ve already had one thrill after the next today. What more could there be? Well, walking down the trail at dark, with my headlamp on, I spotted two astoundingly bright eyes in the trail about 30 yards ahead. Before I could gather my wits, they were gone. But my first impression was that of a cat.
Indeed. When I got to that part of the trail, I looked all around, and below me about 10 yards were the eyes. At first, all I could see was a head with a snout, and then assumed I had a brocket-deer (Montezuma sp.). Then it walked to the side showing its beautifully spotted pelage and a fluffy, long tail banded in black. OCELOT! The only similar species is Margay, normally arboreal and with a much longer, skinnier tail. This animal eventually found a place to watch me, totally silently, from about 25 yards away from which I could see most of its body. My third cat in the tropics, after having seen Jaguarundi in Costa Rica and Jaguar at Cristalino Jungle Lodge in Brazil.
What a day.
Posted by Birdernaturalist at 7:43 PM