A Week at Chan Chich Lodge

I'm about 2/3 of the way through a week-long birding tour here Chan Chich Lodge, near the Guatemalan border in NW Belize. It's been great.

It's shocking the level of comfort and quality of dining one can find here in the middle of the Central American rainforest. Here's a view of the cozy little lodge, built into the central plaza of a small Maya ruin (small compared to the big cities of Chichén Itzá, Calakmul, or Tikal, but still nothing to sneeze at).

With a staff that treats you just right, several experienced local guides to keep us up on recent sightings – some who have been here for the full 20 years of the lodge's existence – and some fantastic birding just outside our cabins, there are few places that can match this for a short birding and natural history holiday.

Today was an especially easy day. We started with hearing the local Strong-billed Woodcreeper who has been giving one or two song phrases each morning about 20 minutes before sunrise right over our cabins. We also saw a couple Common Pauraques, which have been silent all night during the new moon and most active just before sunrise.

We then went by bus to Laguna Seca, a lovely lake with blooming water lilies and surrounded by untouched forest. Here is a Northern Jacana living up to its nickname of lily trotter. 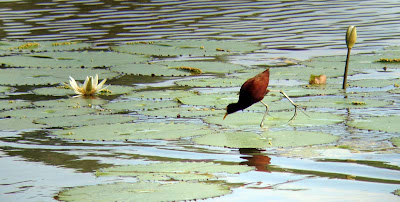 A Crimson-patched Heliconian was one of several butterflies we saw today, our first fully sunny day after the latest powerful cold front managed to knock our overnight lows to about 53°F this past Sunday. But the temperatures haven't reached their tropical heights yet, and today was about as perfect as it gets. 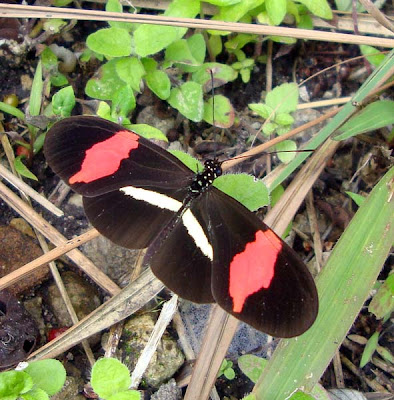 At the Escarpment, some 500 feet higher than the surrounding area, we watched the sky for raptors rising on the morning thermals. Activity was good well into the late morning, and we saw Great Black-Hawk, Black Hawk-Eagle, Ornate Hawk-Eagle, Short-tailed Hawk, King Vulture (at least a couple of us), and several Double-toothed Kites, including this immature which perched right above the parking area. 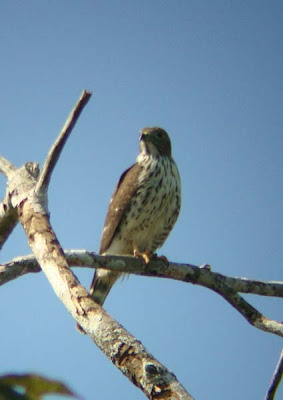 We also had a fantastic encounter with a Royal Flycatcher here, watching it catch butterflies from the edges of the road. I didn't know they were such a butterfly specialist.

On our way back as most were drowsing during the slow, bumpy ride back to the lodge (it's only 14 miles, but the limestone roads don't let our driver go very fast), I startled everyone by screaming out "White Hawk!" as one flew right across the road in front of the bus and vanished in the forest. We walked around for about five minutes, got a glimpse of a Ruddy-tailed Flycatcher, and were about to give up hopes of seeing the hawk when it occurred to me that it might come into a recording. It turns out I had two cuts on my iPod – one from Bolivia and one from Costa Rica. The one from Bolivia, a repeated whistle, had no effect. But the one from Costa Rica, sounding very different from the Bolivian recording, soon elicited an identical vocal response from our bird which promptly flew in and landed right over the road. What a gorgeous sight, surely one of the most lovely raptors in the world. We had our fill of the bird through our scopes as it ignored us, left it to its victory, and headed to our late lunch. What a morning! And I learned how different the southern South American birds sound from these. They look very different too. Hmmm. Why are they considered the same species? 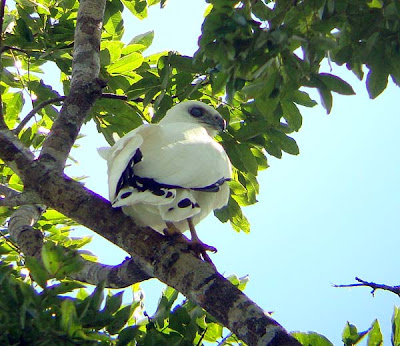 Some other highlights from the past few days:

White-whiskered Puffbird, surprisingly numerous here. This one was foraging with it's partner from the cable supports of the suspension bridge a half mile down from the lodge yesterday morning. They usually stick tight to the forest understory. 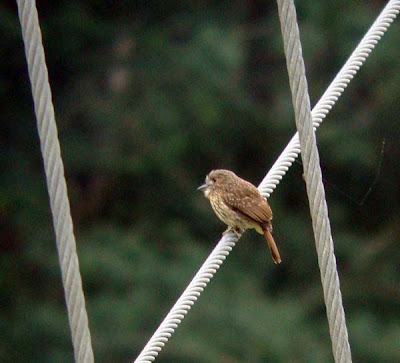 Tody Motmot behind the upper plaza ruins. Quite a special little bird. 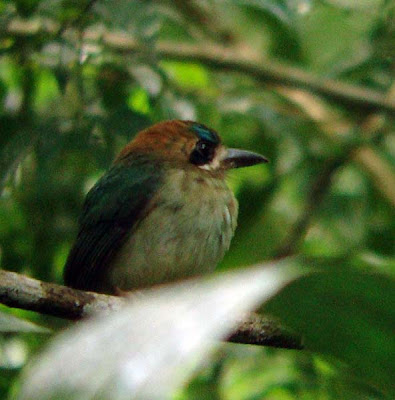 Ruddy and Tawny-winged Woodcreepers, unusually approachable at an army ant swarm. They pick up various invertebrates that are flushed from their hiding places in the leaf litter as the ants swarm across the forest floor. It's very fortunate to find such an ant swarm, as you'll rarely ever see these species away from them. We had another such swarm yesterday that was also attended by a Northern Barred-Woodcreeper as well as both Hooded and Kentucky Warblers. 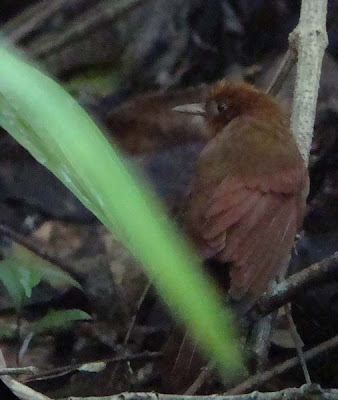 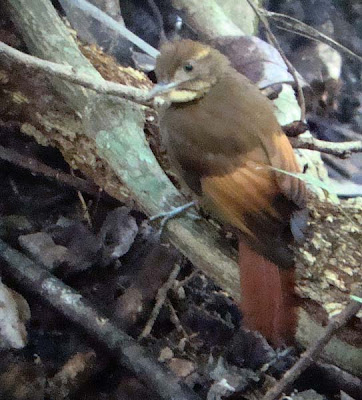 This strange little plant is Helosis cayennensis, a completely parasitic plant in the family Balanophoraceae. One species in this family has the smallest flowers of any angiosperm. 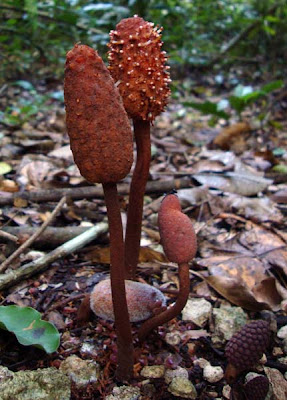 Who knows what we'll see on our last two and a half days? Tonight we're going on a night drive in hopes for a nocturnal animal or bird.
Posted by Birdernaturalist at 3:37 PM