After a splendid morning of birding in the gulf-coast deserts (Gray Vireo, Gray Thrasher, many others) an easy afternoon outing yesterday to San Bartolo didn't result in many birds, but these two lizards were accepted heartily as more-than-suitable replacements.

This one is the Cape Spiny-tailed Iguana, a rather large animal. 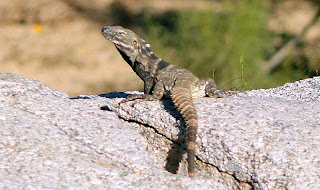 Much smaller, but many times more colorful is the San Lucan Rock Lizard. This is about as dull as they get; animals in breeding condition almost glow. 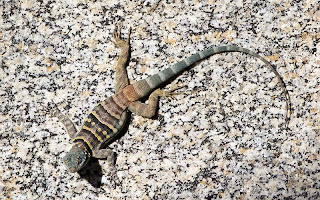 Today was a superb day of birding in the higher elevations. We started with a super rare Pine Siskin, though no one really got excited about that. Then on our way up to look for a Northern Pygmy-Owl (Cape) that had been tooting away during breakfast, I found a Yellow-throated Warbler. There are probably only around 10 records for the region. 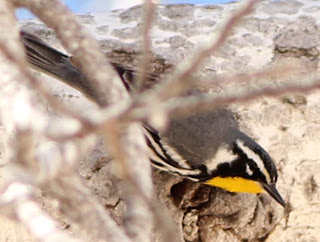 Finding the owl wasn't so hard – it was at eye level in the trees downslope from the road and was utterly unperturbed by our presence (or the occasional mobbing Warbling Vireo, Pacific-slope Flycatcher, or Black-throated Gray Warbler). 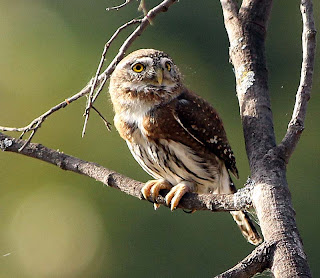 We continued birding downstream, finding the Yellow-throated Warbler again but 300 meters away from where we had seen it. Then another 500 meters downstream we found it again! Or did we? Luckily I took photos of the birds at all sightings, and this lower bird turns out to be a second individual. Crazy. 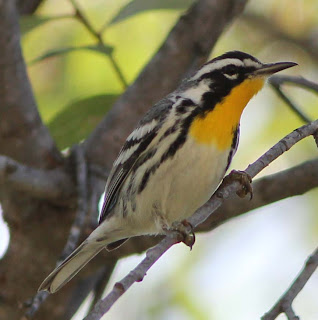 Later, back upstream the car, we refound the first individual, but this time only 125 meters from where we had first found it.
Posted by Birdernaturalist at 10:17 PM