Reflections on My Three Days At Mount Kinabalu 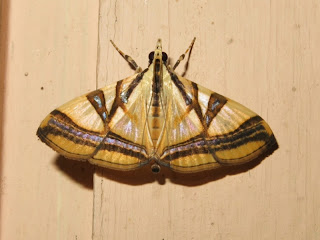 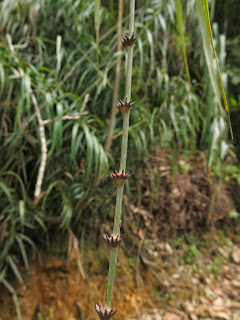 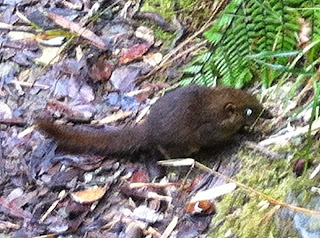 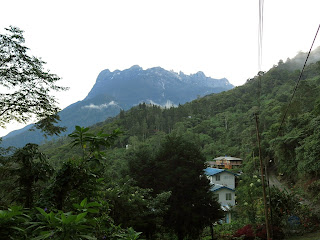 Apart from my layover day in Hong Kong on my way here (where I nonetheless saw eight lifers), the last four days we an amazing introduction to birding in Asia.

It wasn't all perfect, and I will always remember the frustration at missing Whitehead's Trogon, even though I knew a pair or two were breeding in areas where I birded. But I saw a ton of new things (families, even) and even got recordings of many of them. As I work my way to the Danum Valley for my next week of adventure, I thought I would try to boil down my experiences here into some good and not-so-good categories.

Delightful: The cool, moist, mountain air. The elevation here is just perfect, and I was prepared for hot and muggy. Very few biting insects.

Not so great: The two afternoons mostly lost due to rain that started around noon and continued into the late afternoon. It made walking the trails difficult...no, treacherous...and after a bit, even the birds give up. But this mountain, the largest in Malaysia and the highest peak between the Himalayas and New Guinea, makes its own weather when it wants to.

Awesome: The plantlife. I saw my first Nepenthes (the genus of amazing pitcher plants with the modified leaf tip), lovely Rhododendrons, many orchids, and some pretty amazing conifers. I was particularly surprised by the diversity of Melastomes, a family I know from the Neotropics.

A nuisance: The spiny palms. They have a ridiculously long, extended rachis covered in claws used to clamber up into the taller understory trees. Ok, it's pretty cool that a 15 meter tall palm tree can have a dbh (diameter at breast height) of less than a centimeter, but they grab, pull, cut, and tear with no provocation.

Bad: the leeches. Actually, on the first day in the park I was very careful. I tucked pants in my socks, checked frequently, and all day saw nothing. I was going even higher on the mountain the next day, so I was lax, and only back at my room noticed the ring of blood stains on my lower pant legs. Sure enough, right above the top of my sock line were three bleeding bites. In the shower and then for over an hour afterward, they continued to slowly bleed, as the leech saliva has a powerful anticoagulant. I never felt or even saw the buggers -- they obviously have a good anesthetic too.

Good: The rigorous 4-km hike up to the Layang Layang shelter early in the morning, with my lifer Blyth's Shrike-Babbler (recently reclassified as a member of the vireo family), and mixed flocks in the mossy forest. A Mountain Treeshrew was also pretty cool.

Not so good: I didn't see or hear the Friendly Bush-Warbler or Island Thrush, but I knew my chances were not so great here. They're a good reason to come back some time and hike in from Mesilau.

Bad: the hordes of hikers coming back from doing the whole climb to the mountain peak at dawn (another 2-3 km straight up), especially heaps of noisy (even singing loudly) older Koreans. The many young German backpackers were quiet in comparison. You have to pay a lot of money to reserve your spot, hire a guide, and stay in the shelter the night before to get an early start. You don't want to hike this mountain in the afternoon.

Astounding: Walking the Kilau View trail lower in the park (essentially deserted, as nearly all tourists are here to hike to the peak or just say they were in the park and saw the peak), and bumping into my friend Bill Talbot from Albuquerque. He had been on the road for months, mostly doing research for his doctoral thesis in the Kalahari, and had added a few weeks in Borneo to help out some of his colleagues doing similar bird physiology work here (from the University of Montana -- I saw their survey flagging and net lanes everywhere). I think I blogged about Bill's helping me out on the rugged Pine Canyon area on the Atascosa Highlands Christmas Bird Count three or four years ago. What a trip. I also met three of the biotechs (Ed, Tori [?], and a local guy whose name I didn't get) and the project leader Andy, all of whom were really nice and offered helpful birding info.

Really fun: all the fabulous moths at the lights each night at my hotel. I'll have to post a full gallery some time. Especially interesting was the extremely high diversity of pyraustine crambids; I'm used to seeing two or three simple ones in places like Peru or Costa Rica, but here there would be ten or more, some quite ornate.

Meh: Most of the bird songs here are rather uninteresting, either being dull or extremely high pitched, or both. The White-browed Shortwing does do a favorable impression of Winter Wren, and the gradual increase in volume is a nice touch, though it stops short and is still ridiculously high-pitched. Standing out as good songsters on the other hand were the duets of Red-breasted Partridge and Bare-headed Laughingthrush, but it wasn't like the haunting dawn choruses of Australia or Africa.

Very cool: Things named after Whitehead that I did see -- Whitehead's Spiderhunter, missed by many birders, and the adorable Whitehead's Pygmy-Squirrel. It's like an abbreviated chipmunk with the ear tassels of an Abert's Squirrel.

Even cooler yet: The several species of little squirrels that thought they were birds, running through the undergrowth and the canopy keeping up with mixed flocks of warblers, babblers, and laughingthrushes. I had never heard of such a thing, but the association was instantly obvious. And then there it was, stated in the Mammals of Borneo field guide that they do just that.

Now to the hot and humid tropical elevations of the Danum Valley in eastern Sabah. I made a week's reservation at the Field Centre, but I'm not at all prepared to know how to cover the place, let alone how to identify any of the birds I will see and hear. I've been told three days is a good amount of time to get the specialties of the area, so I'm hoping six full days will give me a good foothold.

Captions to the photos:

One of the more spectacular pyraustine crambid moths at my hostel.

The nasty, grabby rachis of one of the spiny palms.

A Mountain Treeshrew feasting on some noodles apparently upchucked by a hiker overcome with exhaustion on the hike up Mount Kinabalu. My camera battery died, so this is with my low-quality phone camera.

A view of the mountain with my hostel Mount Kinabalu Holiday Home ($10/night) in the foreground.

---
Sent with my iPad
Posted by Birdernaturalist at 5:49 AM