This past week I’ve had a chance to go birding on my own between two tours I’m leading in Mato Grosso, Brazil, the most biodiverse state in this huge country. I drove up and over the continental divide (a whopping 556 meters or 1824 feet elevation) to visit the weekend resort and ecological lodge called Jardim da Amazônia (Garden of the Amazon) about 12 kilometers south of the town of São José do Rio Claro.

Despite its fragmented nature (which all happened before our very eyes in the past 30 years only), the forests here are still full of birds and wildlife, and in just 2 ½ days I logged 225 species of birds.

Since I wasn’t with a group, I chose what hours I went out birding, and I found it hard to stop. On my last day, I did something I’d probably not do with a group and set out at 2:45 p.m. to walk a trail, went until it started getting dark, and then slowly worked my way back to the lodge to have dinner at 8:15 p.m. before they closed for the night. It was fun, though tiring. Dusk was interesting as I stood stock still for 25 minutes: I heard and recorded a very close Gray Tinamou (with absolutely no desire to see it) but saw its shape as it flew 15 meters up into a tree to roost and continued to sing. I accidentally recorded the one evening song of a Red-billed Woodcreeper (a bird I’ve seen once before), and before long was surrounded by tooting Tawny-bellied Screech-Owls and whirring Ocellated Poorwills. On a tiny sapling in the middle of the dry forest as I started back was this tree frog, probably in the genus Osteocephalus. 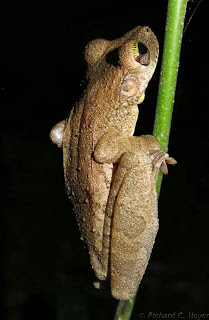 I continued to hear Ocellated Poorwills, Common Pauraques, and Blackish Nightjars on my way back, seeing a few eyeshines dart off as I approached. But when one bright pair of eyes off the side of the trail didn’t budge, I knew what I had: an Ocellated Poorwill on a nest. 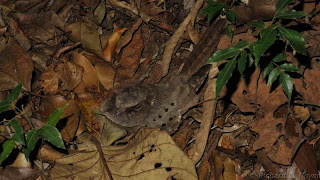 Then just about a couple hundred meters later, an eyeshine about 6 meters off  the ground in the forest midstory had me puzzled. Only when I fully sized up the creature did I realize it was a Long-tailed Potoo, only the third I’ve ever seen. It’s darker than Common Potoo, with a more contrasting white wing patch (not so visible here) and whisker mark, but it’s the very long tail that’s the clincher. It looked to be on a nest as it didn’t budge, but I wasn’t sure. When I was about 150 meters away, I played song to see if the male was in the area, and he came in almost right away, singing from the opposite direction of the nest and perched right over me and sang both song types, one sounding much like an owl. I presume then that the female was the one on the perch. 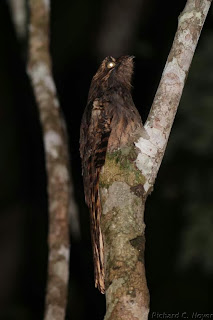 Then I went back the next morning, as getting good photos with flash is always tricky. I’m glad I did. The Ocellated Poorwill was still there, but this time looking a lot more rufous. This is probably the female, while the grayer male had incubation duties at night. 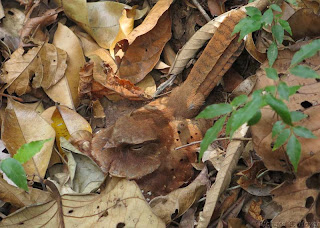 I don’t know if the potoos have similar roles in nesting. But during the day, this bird took on a much more cryptic posture and shows the more prominent wing patch. Maybe this one is the male. I should note that I walked right past both of these birds the day before with the charming local guide Marcio, who I think has gone back to see the potoo by now. 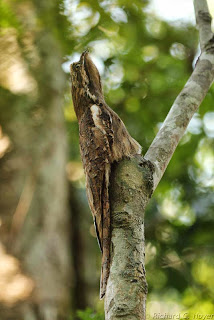 When I moved around to get a view of the bird’s amazingly long tail, it shifted a bit and revealed a tiny downy chick. Precious. There are a couple online photos of Long-tailed Potoos on nests in SE Peru and in Ecuador, as well as a scholarly article describing the first nest from French Guiana, but I can’t find any mention of a nest in Brazil. It’s a pretty uncommon thing to find in any event. But then how many people go walking in the forest at night? 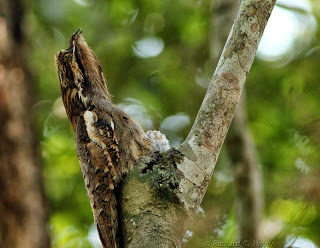 Or, at Jardim da Amazônia, you can just hang out by the lodge and drink Caipirinhas and be treated to sights like these Blue-and-yellow Macaws and not be in the least bit disappointed. 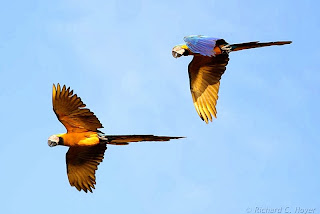 Posted by Birdernaturalist at 7:01 PM