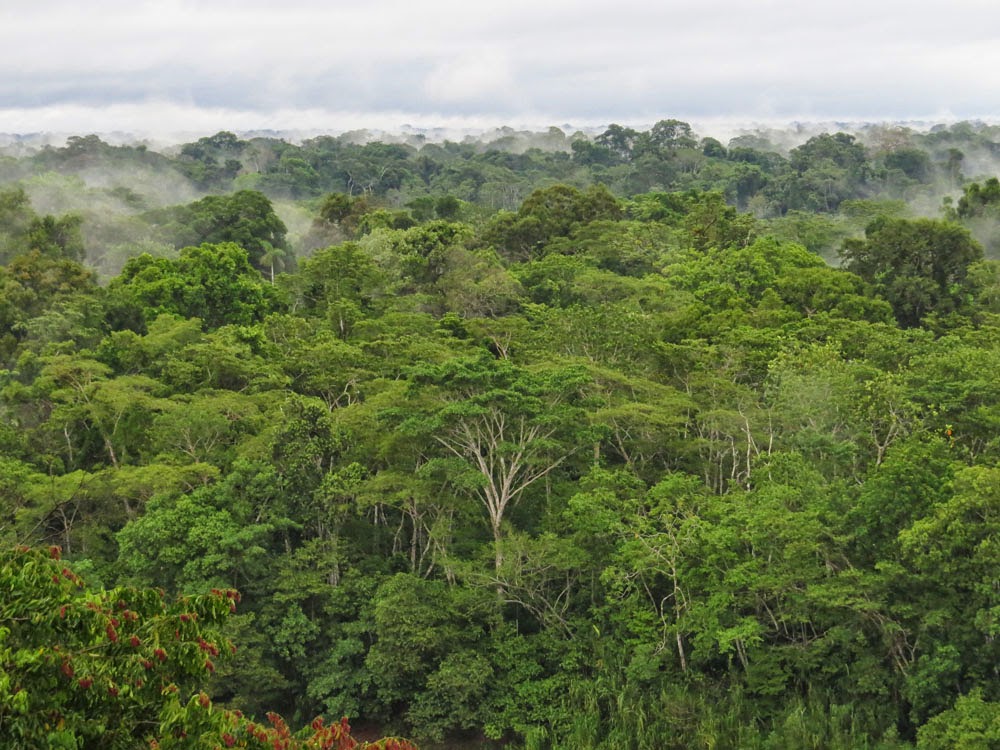 This is my blog from the 12th day from a private tour I led down the Kosñipata Road and the Madre de Dios River in SE Peru from October 25-November 7. We'd had surprisingly beautiful weather so far, with only one day of rain, but we wanted rain. It brings mushrooms. And today we got rain.

In the early morning we saw the Undulated Tinamous that Nito told us about. There were three birds at times, foraging out in the open rather unlike tinamous. 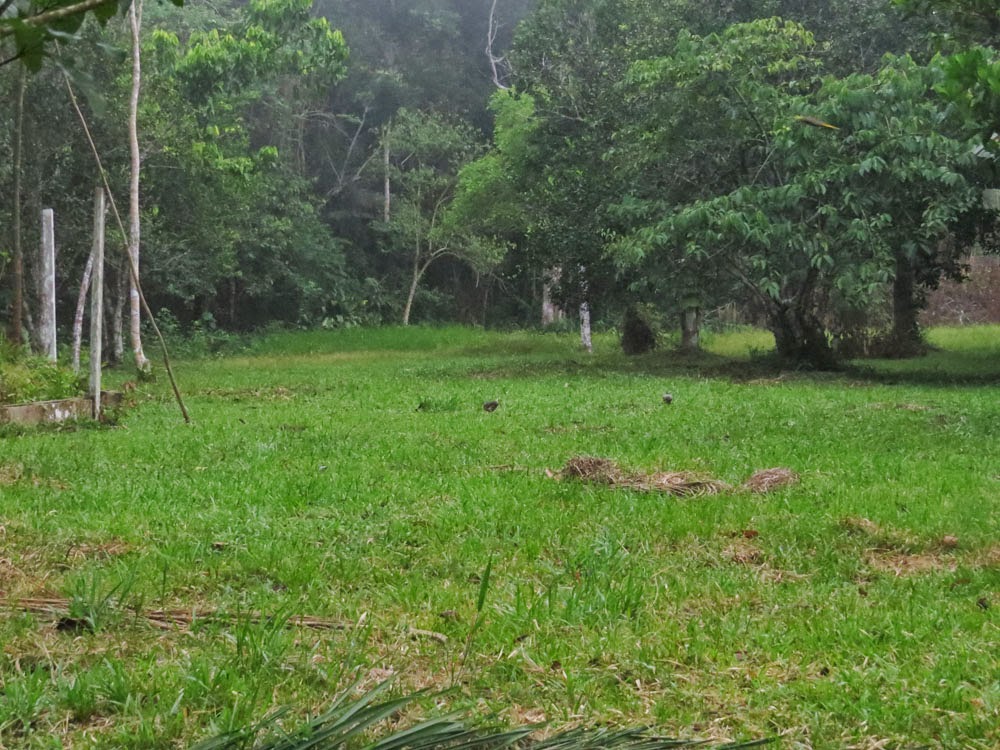 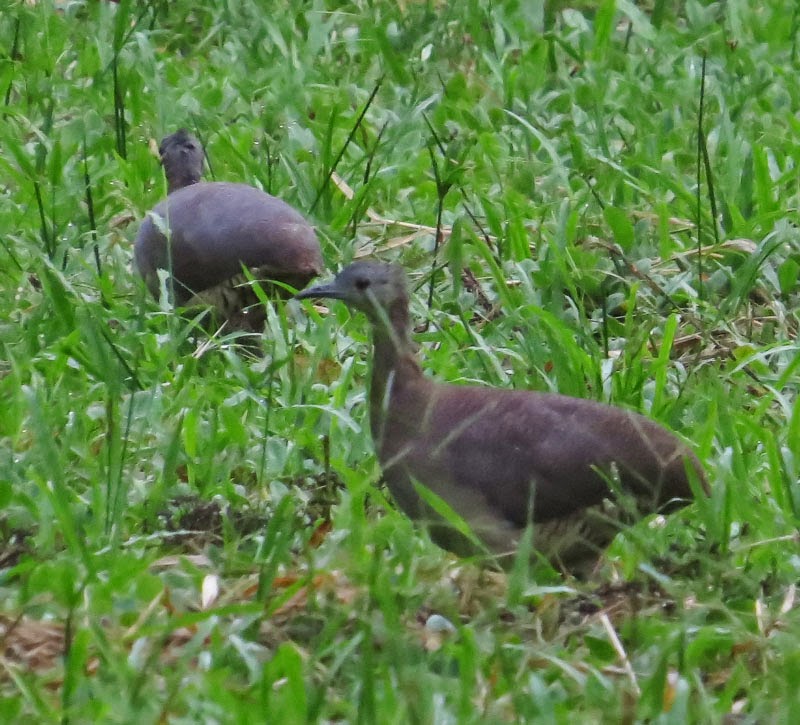 After breakfast and early birding on the grounds, I returned to my room to get ready for the morning's hike and found this gorgeous Bridled Forest-Gecko, Gonatodes humeralis, on my porch. 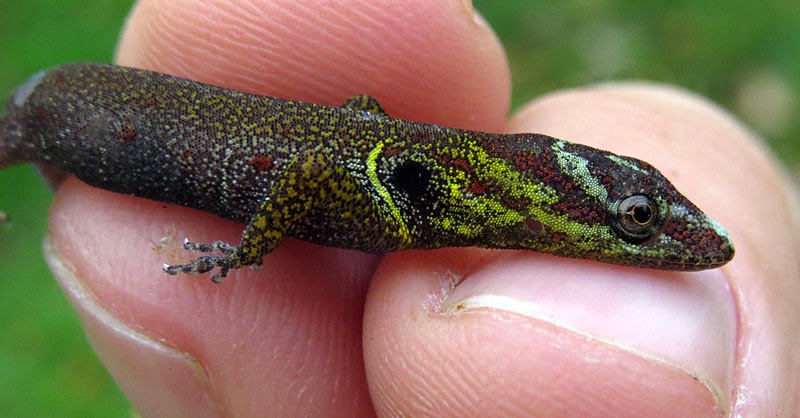 Here's the extent of today's outing. Our morning goal, at the end of the red line, was to the palm swamp and lake known as Pozo Don Pedro. 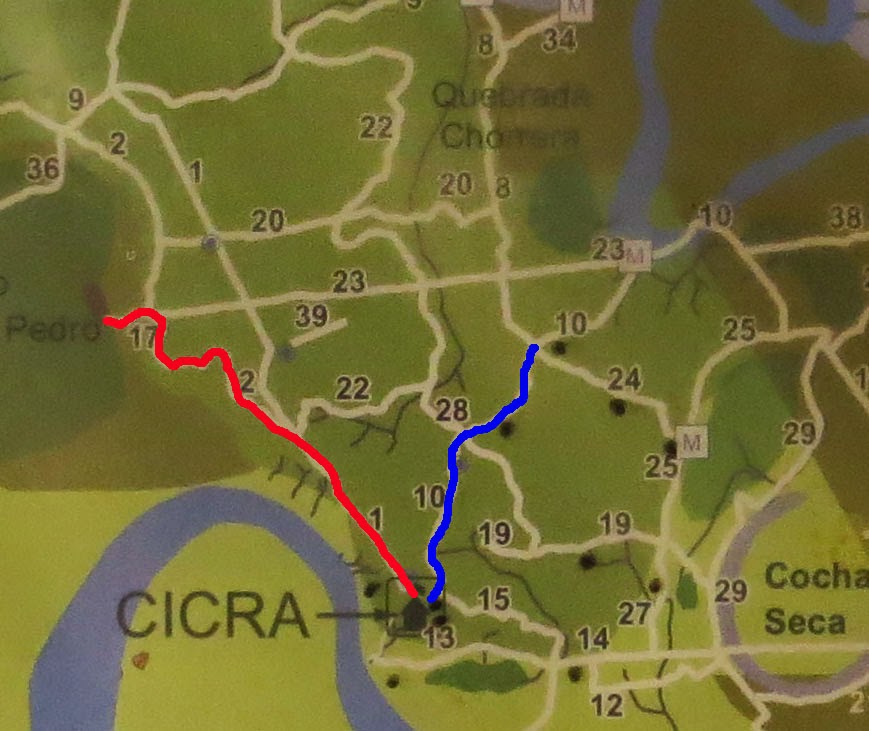 On the way we came across a hyper but relatively approachable group of Emperor Tamarins. This is one of the best places to see this species. 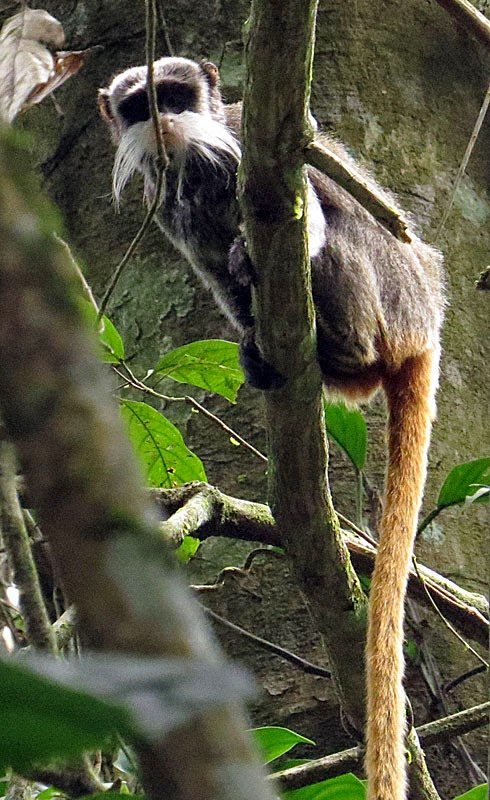 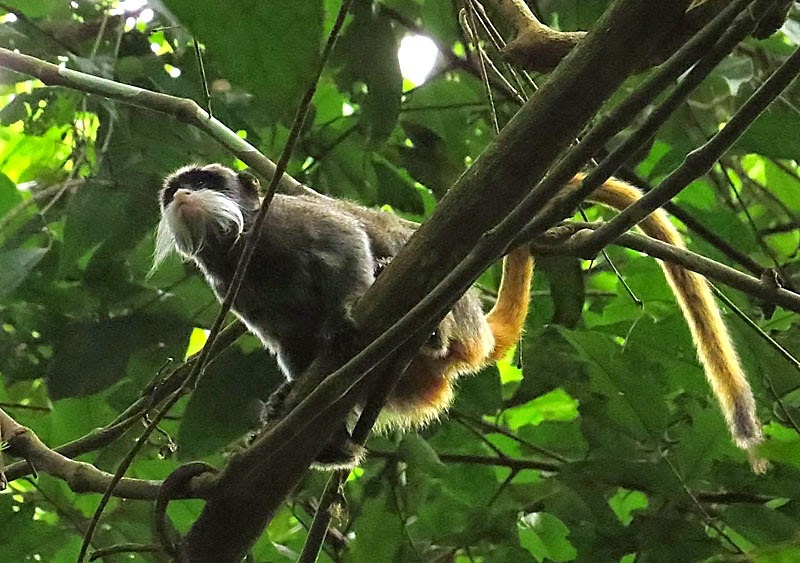 We're at Los Amigos Biological Station on the Madre de Dios River. The Spanish acronym for the station is CICRA, which stands for Centro de Investigación y Capatación Río Los Amigos, and you can read all about it on their webistes: ACCA and ACA. We are visiting only a tiny part of the entire reserve, which is a huge conservation concession of largely pristine Amazonian wilderness.

When Susanne stopped to photograph a mushroom, we noticed what looked like a maggot. I removed a few leaves out of the middle of the trail and revealed what I think was an aggregation of sawfly larvae. Sawflies are a hymenopteran, as are ants, bees and wasps. 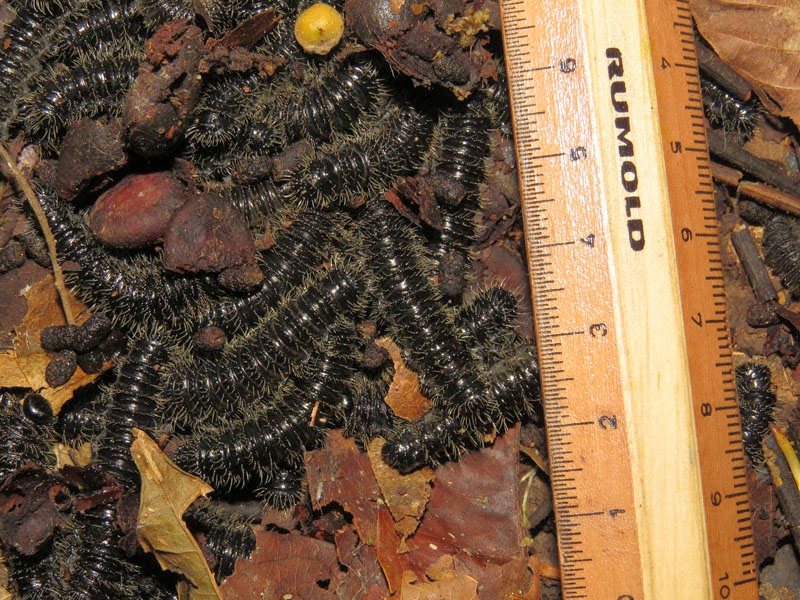 This metalmark is in the usually unidentifiable genus Detritivora, called scintillants. Of the 31 species listed at the Butterflies of America website, nearly half have no photos, and some of those that do are underexposed, showing no field marks. I suspect this one will remain unidentified for some time, but I do note that there is one named D. manu, certainly a possibility. 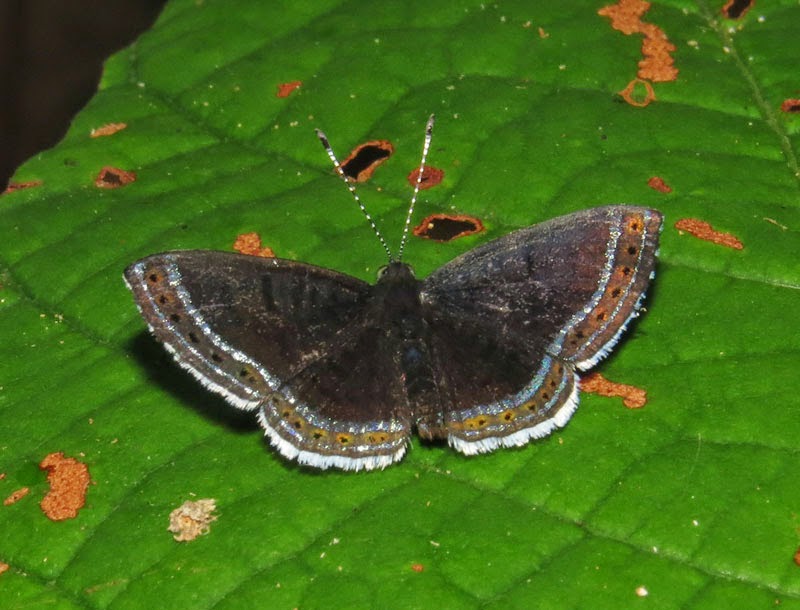 There were some very interesting mushrooms on the way. This Deflexula sprucei is in the group of club and coral fungi. 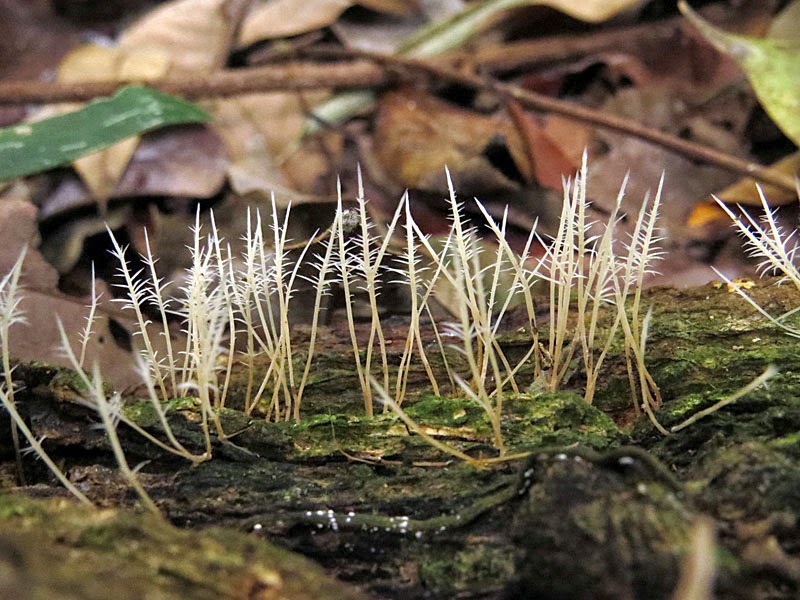 This Penicilliopsis clavariiformis looks like it might be related to the above, but it isn't; it's actually in the same family as Penicillium mold (from which we get penicillin) and Aspergillus. This one seems to grow, possibly as a pathogen, on fallen tree seeds. 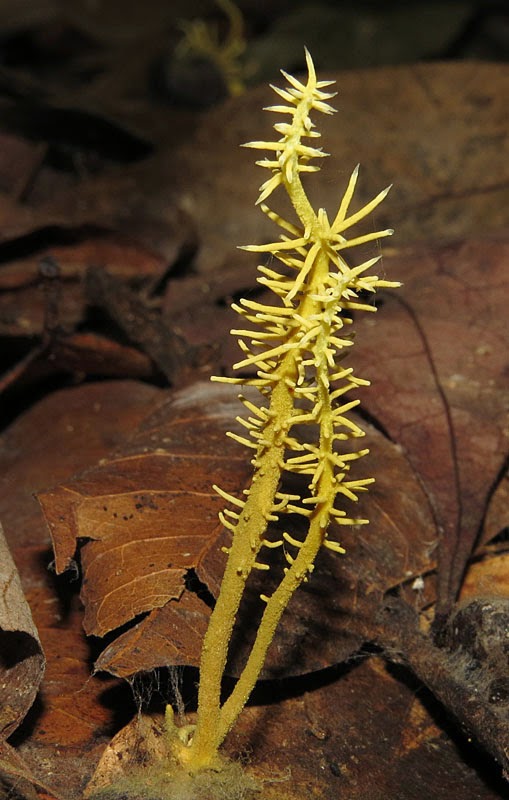 One of the most beautiful tropical mushrooms is this Leucocoprinus cretaceus, which we had last year in this region as well. 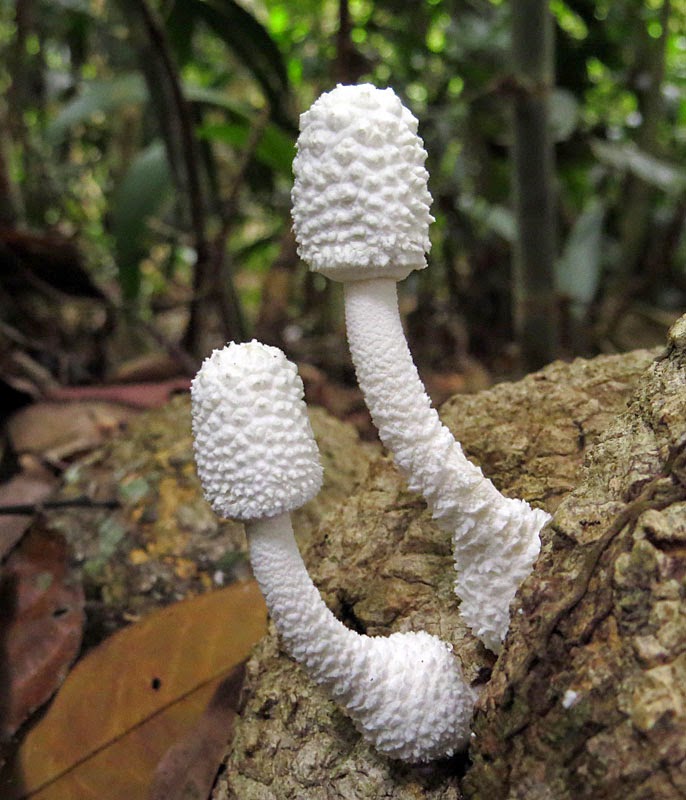 And another very attractive Marasmius species. 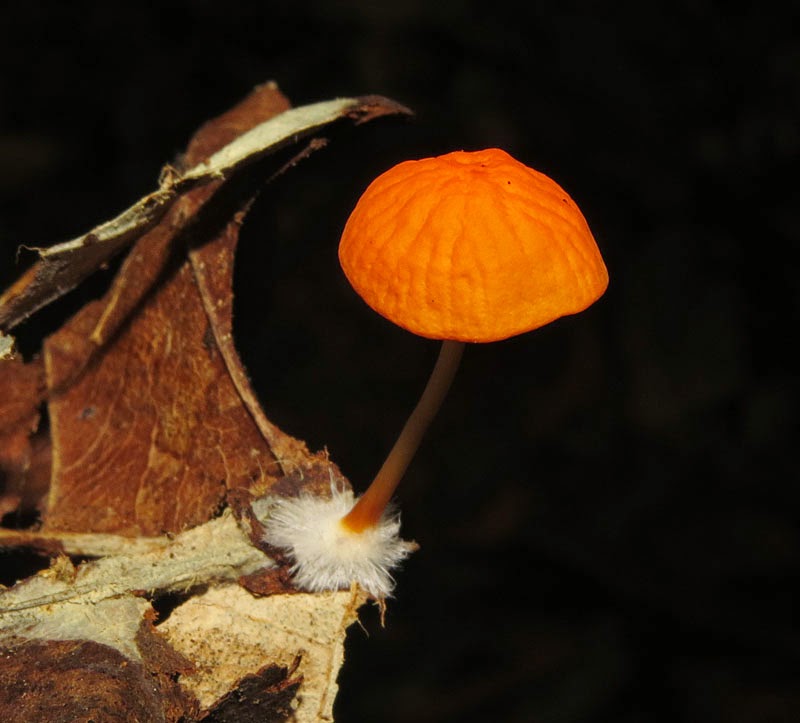 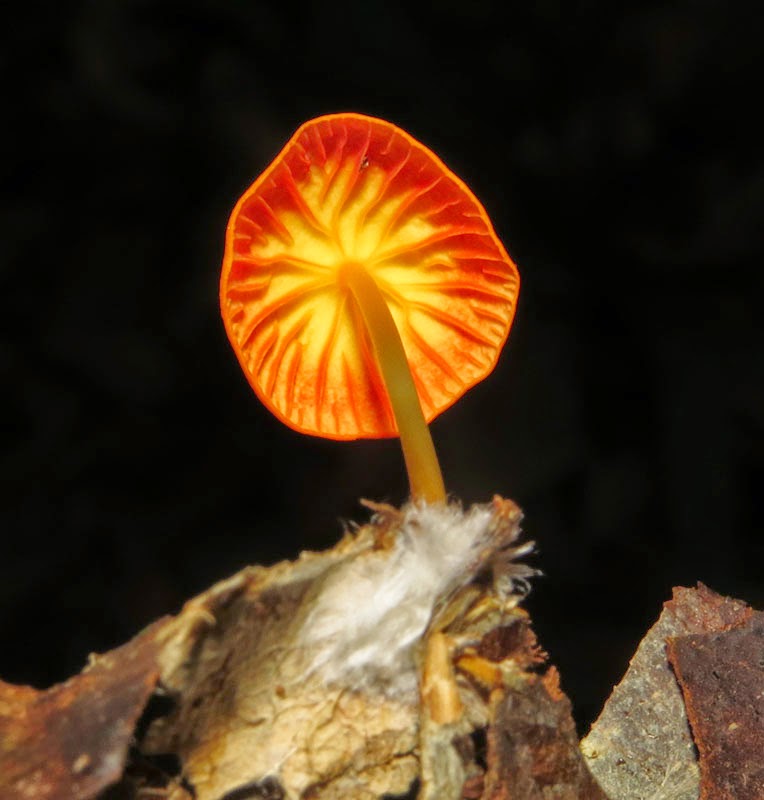 We finally made it to the swamp, with a boardwalk reaching to the small area of open water. 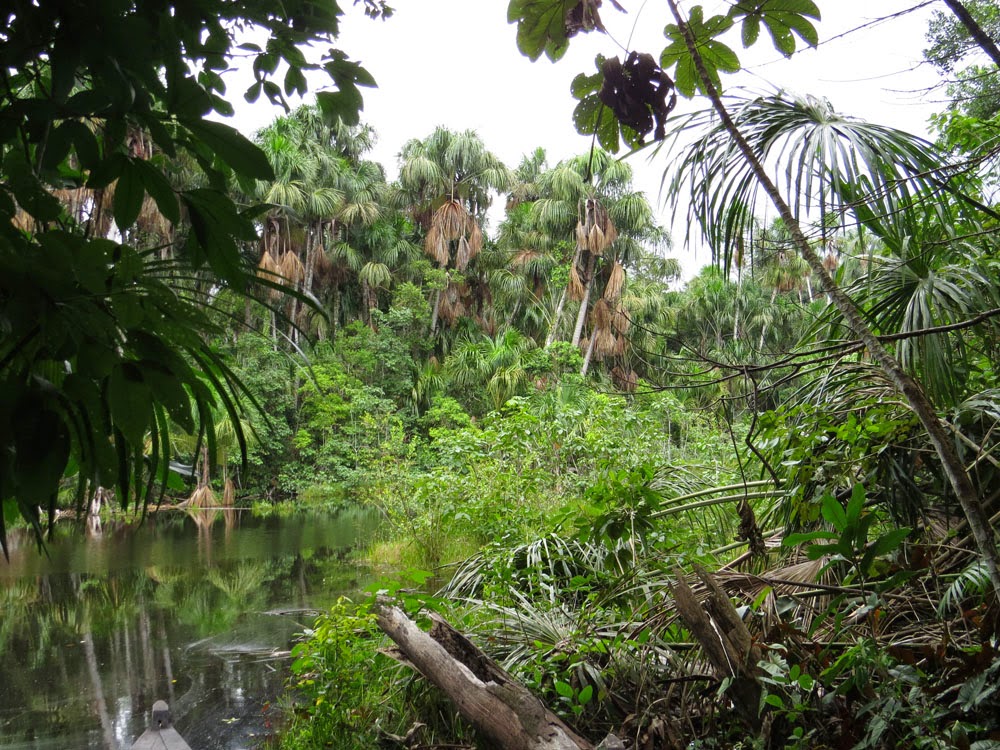 My owl imitations and pishing brought in several birds, including this very bold Euler's Flycatcher. 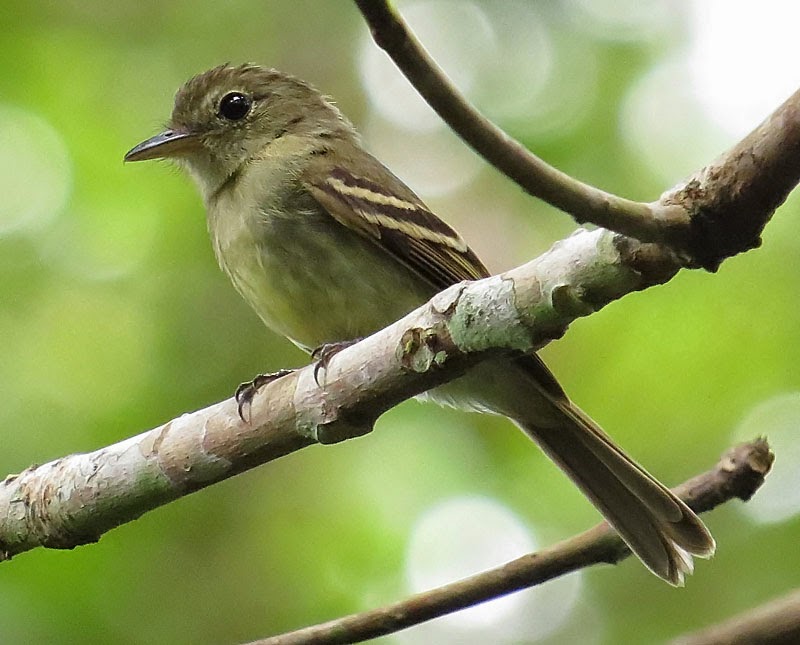 Growing up one of the palm trunks was this orchid in the genus Vanilla. Too bad it wasn't blooming. 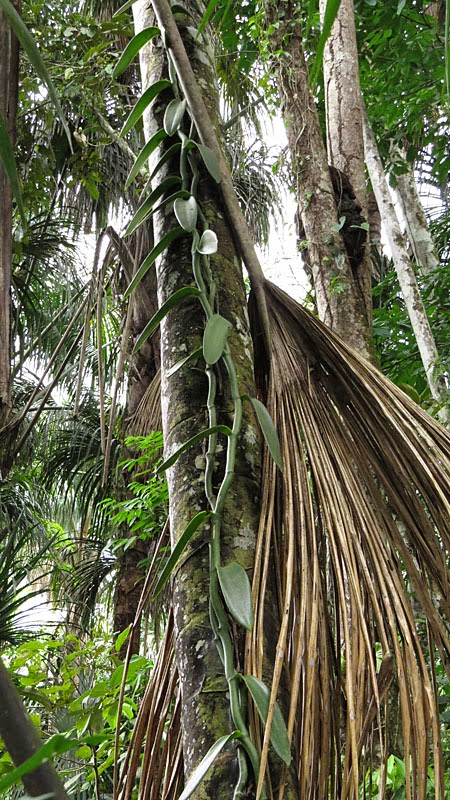 As we began walking back, the skies opened up and it began to rain. It poured for the next two hours, one of the more intense and long-lasting tropical downpours I've seen. It was fabulous. By 1:45 it stopped for good, but the skies remained dark and heavy. The views of the refreshed rain forest from the overlook by our cabins was good for the soul. 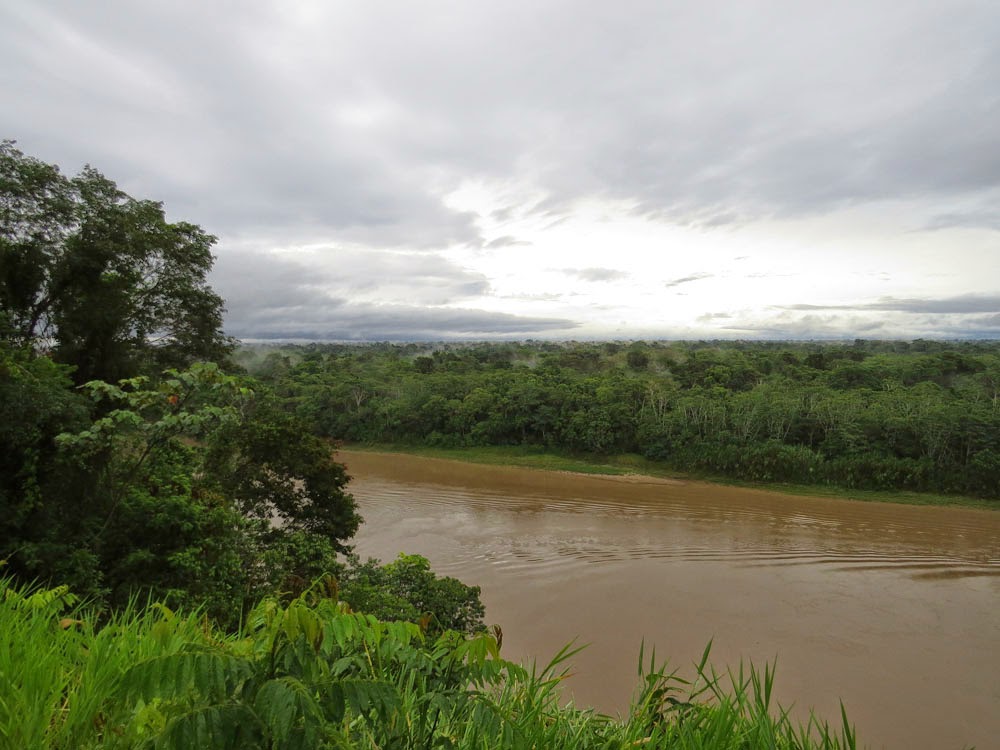 We set out again down trail 10 for what would be a rather quiet late afternoon walk (see the blue line on the map above). Yet our afternoon bird list still totaled a respectable 71 species. In fact our best bird of the whole trip came as we were walking towards a stand of bamboo and I heard what vaguely resembled the snapping of a White-collared Manakin display, but more hesitant. I had never heard the sound in person before, but I was pretty sure it was the bill snapping of a ground-cuckoo! We snuck forward quietly and I imitated the sound by slapping two fingers of my right hand on my left palm. Almost immediately a Rufous-vented Ground-Cuckoo charged at us from within the dense undergrowth! It retreated a bit when it saw us, but I continued to communicate with it, and we saw it cross the trail back and forth twice out of curiosity. When it appeared that it had finally disappeared back into the forest understory, we continued down the trail and a few yards later saw it hop off the ground and onto a low log not far off the trail. I got my bins on it this time and saw that this was a different bird – a very young and not fully grown chick! It too then vanished into the undergrowth. We were very lucky. We told Nito about it this evening, and he went back the very next morning and several times during his remaining couple of weeks but never saw them.

This pleasing fungus beetle is probably in the genus Erotylus. 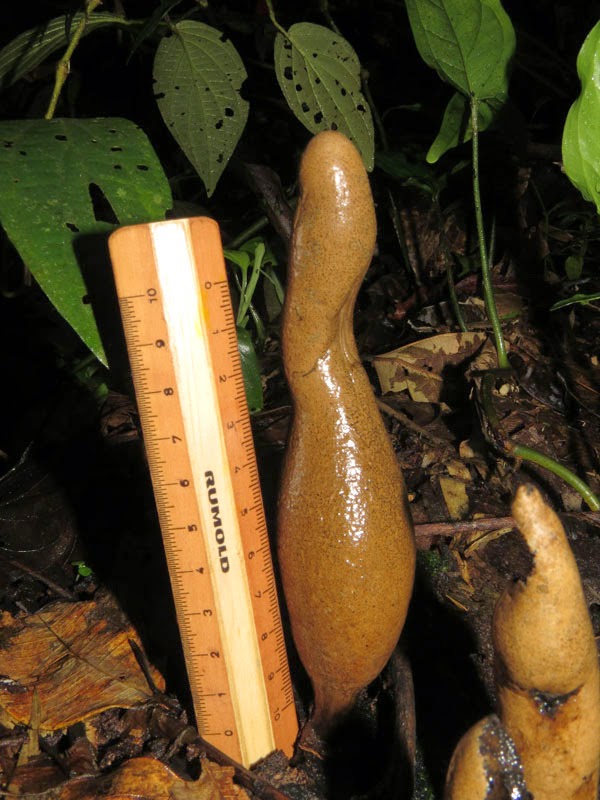 We got as far down trail 10 as the three sprigs of heliotrope that I had brought with me from Villa Carmen and hung in the understory to attract clearwing butterflies. For some reason there wasn't much action on them, but at least there was something. To give you an idea of how difficult clearwings can be to identify, consider that these two nearly identical bugs are in different genera. The first is an Oleria species. 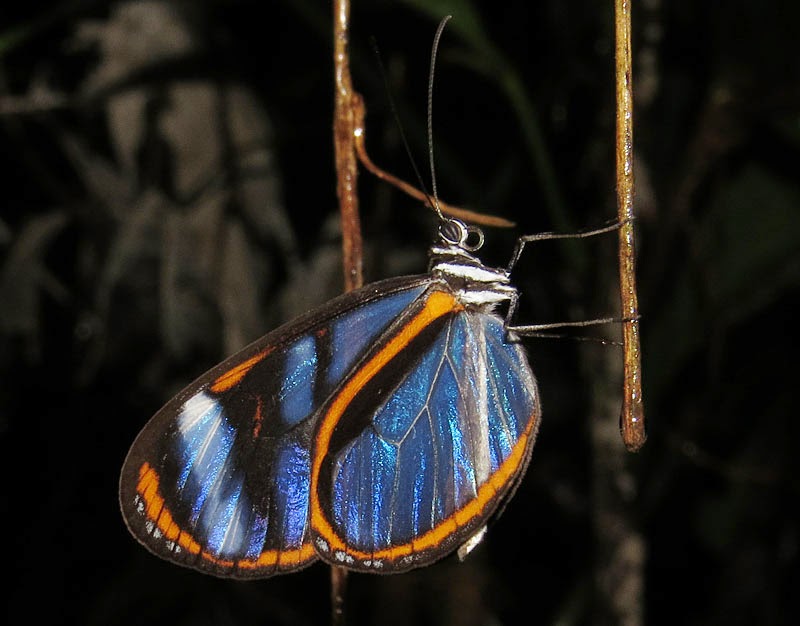 This is Agnosia Clearwing, Ithomia agnosia. If you disregard the colors, you might notice that the venation, especially in the hind wing, is very different. 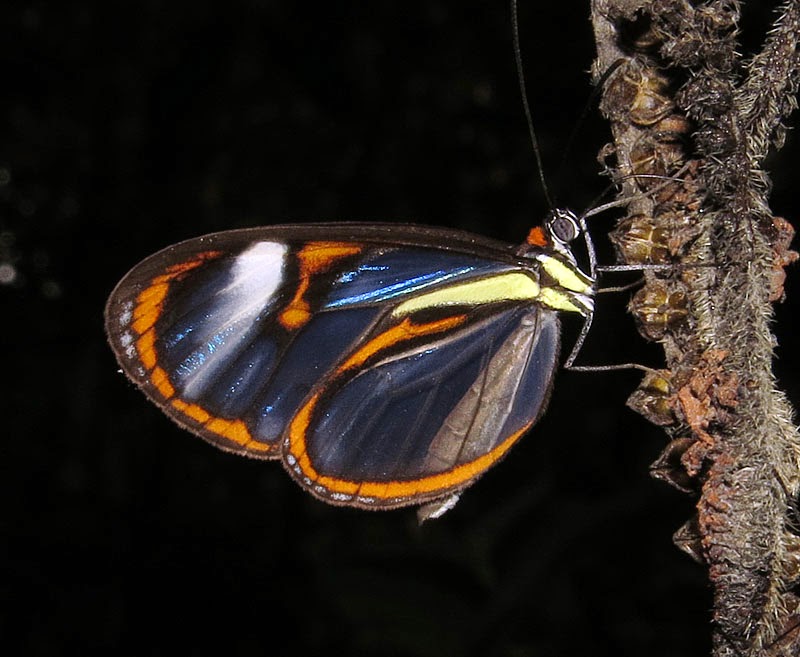 Happy for the rain was this tiny Conspicuous Rocket Frog, Allobates conspicuus. 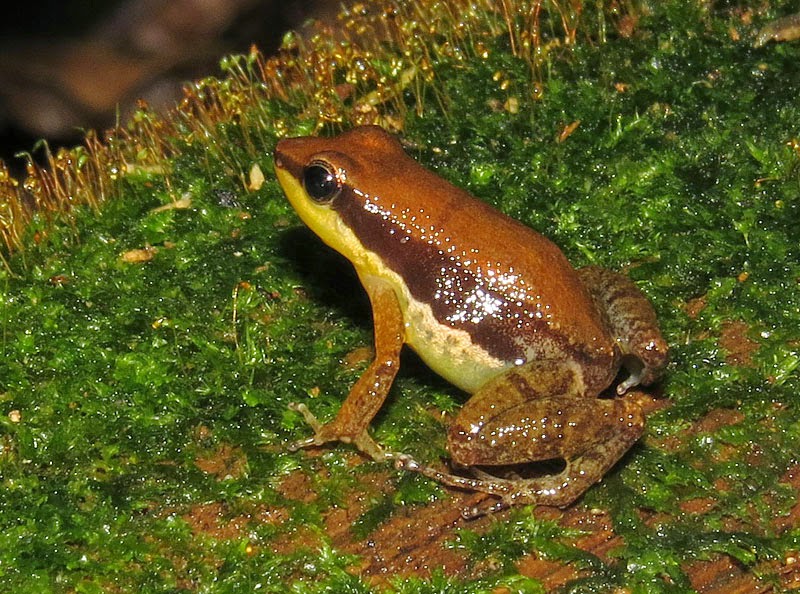 And by Susanne's room was this Giant Toad, Rhinella marina. 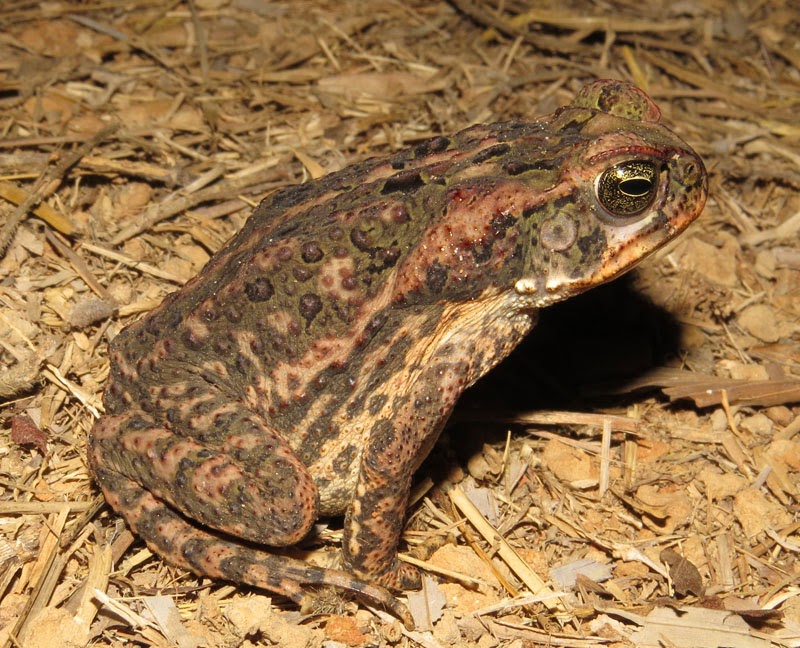 Posted by Birdernaturalist at 9:56 AM