Of Sinaloa Wrens and Neotropic Cormorants

A short visit from one of my oldest friends from Oregon, Alan Contreras, was a perfect excuse to go birding. We planned to go birding a bit Thursday morning, followed by a small homemade pizza and wine party with a few friends of mine, but a howling gale kicked up, as forecasted, Wednesday night and continued all day Thursday. So we postponed birding until yesterday. Here's Alan on the right, with friends DuWane (you can see his hands), Jack, Manabu, Andrew, and Hal enjoying the pizzas they each made. 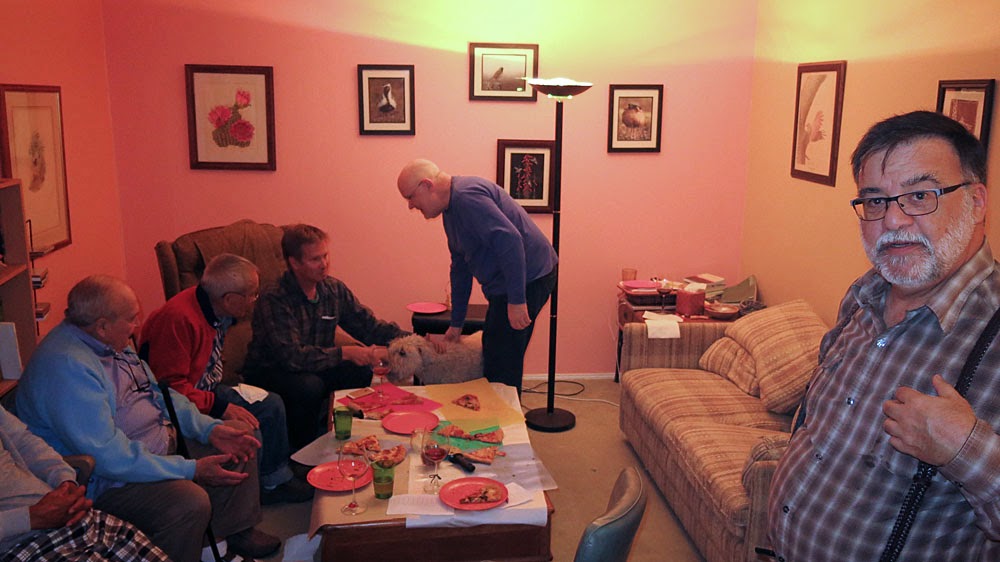 Without too much difficulty we found our primary target, this Sinaloa Wren, along the Anza Trail south of the town of Tubac. 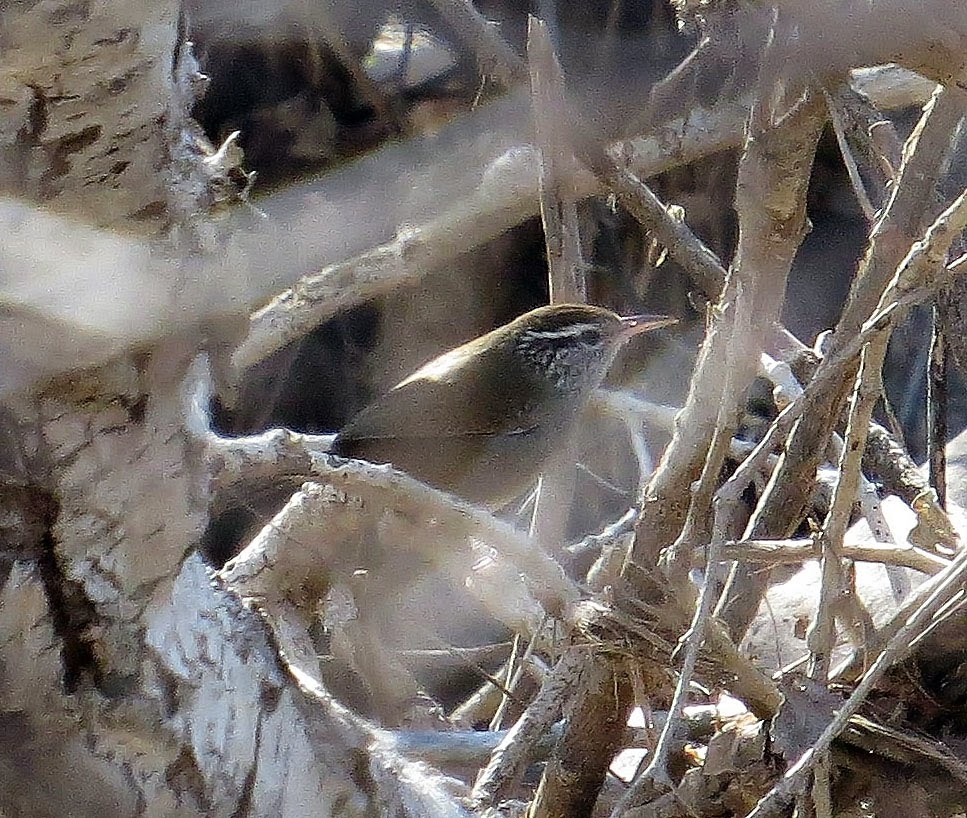 This bird is one of only two individuals of this species known to be in the United States at this moment, and the species first occurred in this country just six and a half years ago. Up until then it was known strictly from Mexico, but breeding was known to occur as close as 30 miles from Arizona, and several people suspected it would eventually show up here. The scenario explaining its arrival – as well as its rarity here – is rather easy to surmise, and very closely matches that of Black-capped Gnatcatcher and Rufous-capped Warbler. Each species has its own precise habitat requirements, but all three are common, non-migratory residents in western Mexico well up into northern Sonora where their habitat is continuous but comes to an abrupt stop not far south of the US border. North of there one is met with higher, drier elevations as well as the increasing influence of temperate weather systems. But bits and pieces of their preferred habitats do occur to the north, once you get over that last ridge and drop into the uppermost stretches of the Santa Cruz-Gila River drainage on our side of the border and find yourself in the most protected and well-watered canyons and riparian areas. So when individual birds at that bleeding northern edge of the continuous, appropriate habitat are forced out of their natal territories to go set one up of their own, only to the south will they find more habitat. But they don't know in which direction to disperse, and any that try to wander north will find themselves in uncomfortably open, exposed situations, probably unable to find food or hide from predators. So they probably just have to keep moving. Many of these dispersing birds probably die, but some, perhaps those with just a bit more wanderlust than the average, get lucky and find those pockets of habitat in Arizona.

The first Sinaloa wren was found along Sonoita Creek in Patagonia on August 25, 2008 by Matt Brown and Robin Baxter, and that bird stuck to that territory for at least 15 months. The bird that Alan and I saw yesterday was found by David Stejskal on September 11, 2013, and theoretically could be the same bird that gave up on finding a mate in Patagonia and wandered about 30 miles downstream to its current location. But unless it's singing, most birders would overlook this bird, and it's even possible that four or five are living in obscurity up and down Sonoita Creek and the upper Santa Cruz River.

The second bird known from the United States was found on April 14, 2009 by Diane Touret in Huachuca Canyon, near Sierra Vista. Many birders reported not being able to find it after April 18 that year, and with the Patagonia bird being easier to find, few birders ever returned to Huachuca Canyon. But Ron Beck and friends found one in the same general area on September 2, 2013 – just 9 days before Dave found the one by Tubac. And it should be mentioned that both of these birds were discovered because they were singing. Each could have been there for months (and it only seems obvious that the Huachuca Canyon bird had actually been there, undetected, for the previous 3 years and 4 ½ months), but perhaps the species has a quiet period during the mid-summer months, with an upsurge in singing activity in September.

Bird activity was actually pretty high along the 50-yard stretch of the Santa Cruz River while Alan and I walked back and forth hoping to get good views of the wren. I had birded this spot last April with my friend Anthony Collerton (but missed the wren then), and on the very same power poles then was probably this very same Common Raven who seemed to be uttering what I would refer to as a “song.” Here's my recording of it:

As Alan and I drove back north to Tucson to bird some other areas, I mulled around in my mind what spots might be interesting, and almost at the last minute decided on Sam Lena Park, also known as the Keno Environmental Restoration Project (KERP). It used to be merely an unmarked, unfenced, and untended catchment basin for runoff, and in the late 1990's was a fabulous place for birding. Then the city decided to “improve” it, and while there has been some recovery, access is limited, with fences and warning signs, and it just isn't as attractive as it used to be (plus, it's a 9.5-mile bike ride from home, and back then I owned a car). Nevertheless, there is a lake that is largely visible, and any body of water in the desert has potential. The first surprise as we arrived was the largest group of Neotropic Cormorants I have ever seen in southern Arizona. I counted 70, amongst which was one Double-crested. This appears to be a recent influx, with other eBird reports from the past few weeks mostly being fewer than 30 birds. This is a recent phenomenon that is only three years old – the arrival of dozens of Neotropic Cormorants into the Tucson area during January and February, when they now far outnumber Double-crested Cormorants. A quick check of eBird data for the months of January and February show a few were here in 2010, but in 2009 and 2011 none were reported.

We birded along the edge of the reservoir and the inlet arm, first coming across this pair of Greater Roadrunners. The male seemed to be trying to impress the female with his blue, white, and red postocular skin exposed and engorged with pigments. 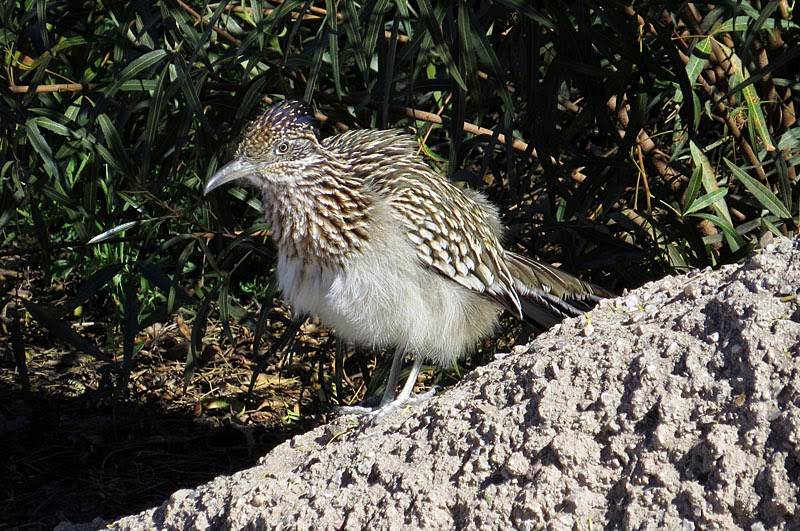 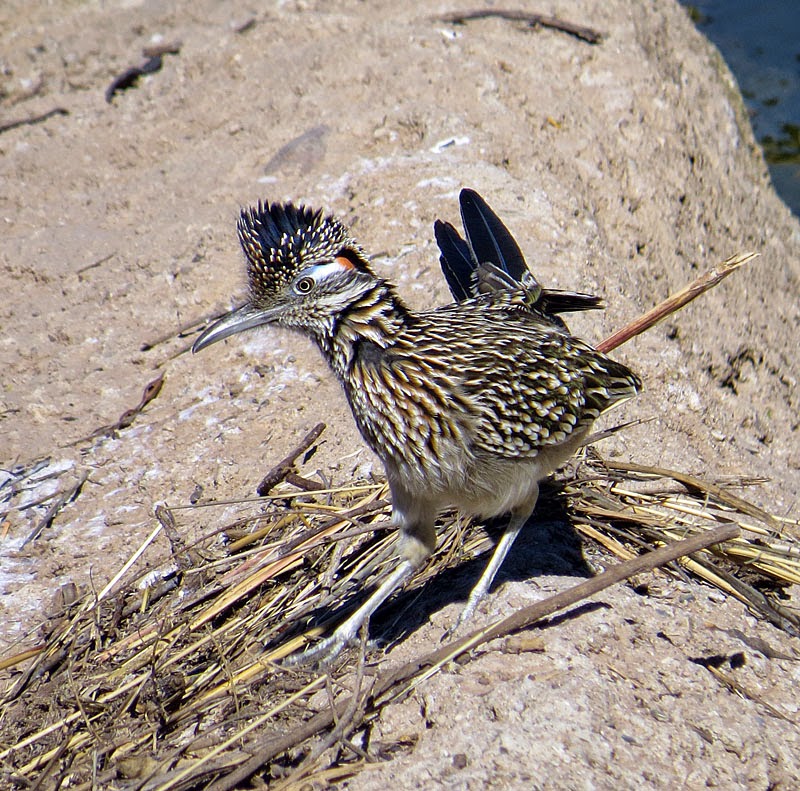 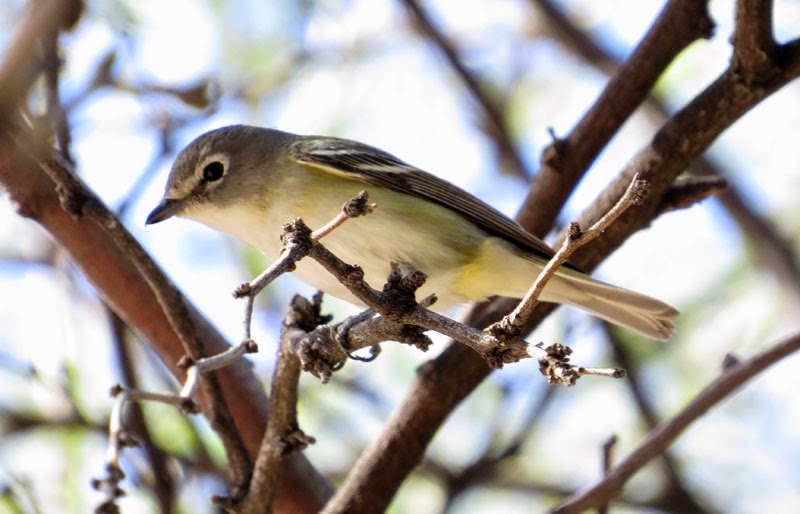 When we returned to the car, the cormorant flock had been joined by this Snowy Egret, a very scarce bird here in the winter, with only three having been spotted on the Tucson Valley Christmas Bird Count. 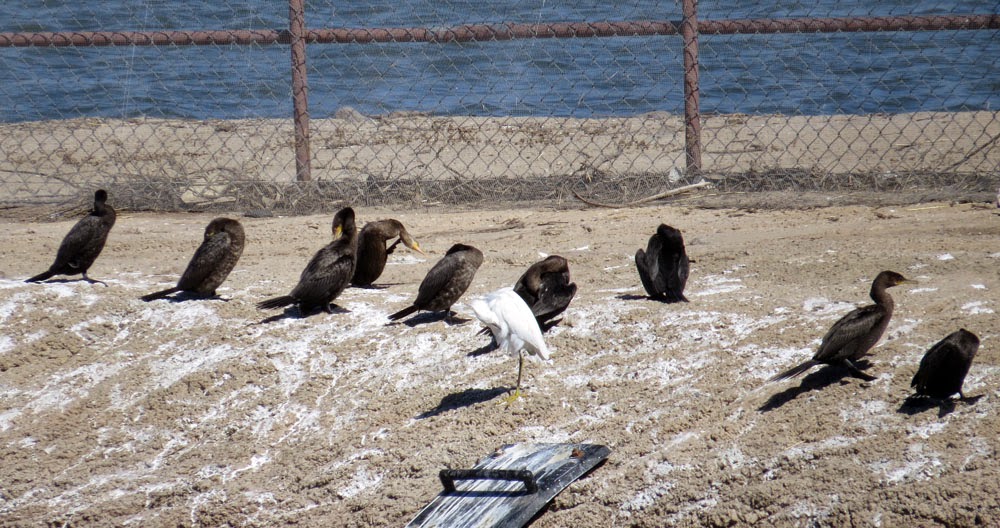 Posted by Birdernaturalist at 11:24 AM