In Search of Soapberry Hairstreaks

This past Sunday, May 10, against my better judgment in view of the fact that I was home for only two days after guiding at Southwest Wings and still had to pack and prepare for a seven-week trip to three states and four guiding jobs, I went out birding and butterflying with my friends Mary, Fred, and Gary. Mary was practically promising me Soapberry Hairstreaks in Molino Canyon just northeast of Tucson, a species of butterfly I have wanted to see for many years. The adults fly around their host plant (Western Soapberry, Sapindus saponaria, here var. drummondi) only during May, after they emerge from their chrysalides. The adults lay eggs, which remain dormant on the twigs until new leaves emerge the following spring. The adults die soon after they lay their eggs, so this is the only time you can see them in this stage of their life cycle. It’s an odd hairstreak, being the only member of its genus. 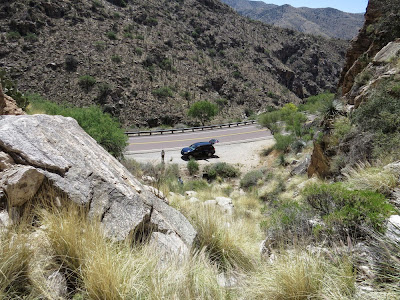 We first stopped at this steep draw on the lower Catalina Highway. Only during the mid-morning hours does it get sun, and the rarish Cestus Skipper is known from here, due to the presence of its host plant, Bamboo Muhly. And we saw one; this being only my third Cestus Skipper very soon after my second just a week and a half ago. 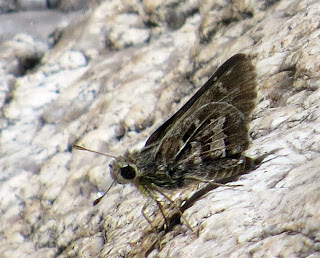 While clambering on the rocks to get close to the host plant, I noticed a lovely little composite growing straight out of the rock wall. It is Lemmon's Rockdaisy, Perityle lemmonii. I particularly like composites like this with no ray flowers. It has extremely brittle stems, but where it grows it probably gets few direct wind gusts and no perching birds or animals. 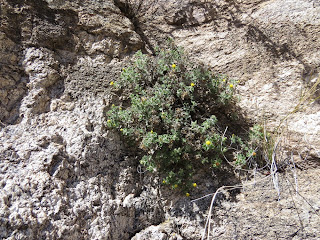 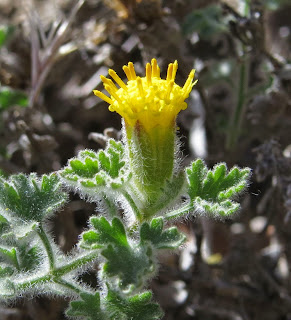 We then moved up the road less than a mile to the Molino Vista overlook, where a nice patch of Western Soapberry grows near the stream bed. We spent nearly 4 hours here and never did see Soapberry Hairstreak, but we did see other hairstreaks and a bunch of other things.

I had actually forgotten what to look for in Soapberry Hairstreak, so when I saw an unusual hairstreak that clearly wasn’t the abundant Gray Hairstreak, I got excited and thought I had one. Then Gary came over and corrected my identification: this was a rare Mallow Scrub-Hairstreak, Strymon istapa, only the second one I’ve ever seen in Arizona, and a much rarer bug than Soapberry Hairstreak. “Better than a Soapberry!” said Fred, but since I had seen one of these before, even in my yard, I had a different view of which was “better.” 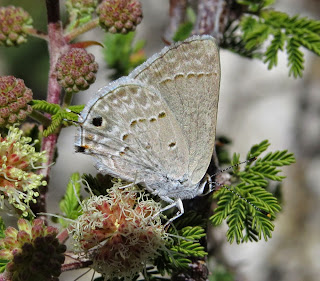 We walked nearly ½ mile up the canyon bottom, past the Western Soapberries and looked at all bugs on the moist sand and sipping nectar from the abundant Catclaw Mimosa, Mimosa aculeaticarpa. I also looked at the birds. This just-fledged Bell’s Vireo was a constant noise at one spot. 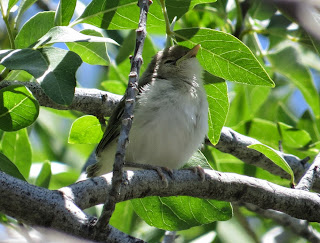 Near the parking lot was this spotted whiptail that defies identification. The relatively well-pronounced stripes that are not particularly bright on the rump or neck; the well-pronounced spots that are visible between and within the stripes but aren’t particularly bright and yellow on the hind legs; the bluish cast to the throat; the olive tail; and the fact that we are in the Santa Catalina Mountains of NE Pima County, all do not match up to anything at reptilesofaz.org. But it does at least seem to be one of the parthenogenetic, female-only species of hybrid origin. 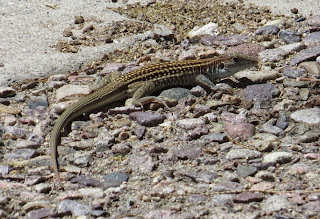 This milkweed bug appears to be Lygaeus reclivatus. 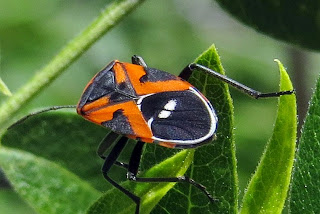 I spotted this tiny, cream-colored jumping spider on the soapberry twigs while I was searching for caterpillars. I wondered if it specialized on hunting from this particular plant. 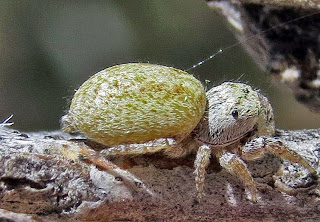 This bee fly, Poecilanthrax poecilogaster, was one of the more common insects in the canyon this morning. 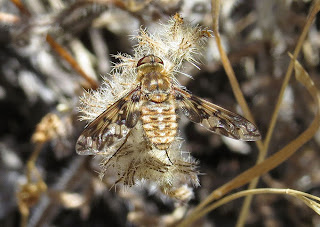 Although I saw and heard only 33 species of birds, our group list of butterflies totaled over 40. This Erichson's White-Skipper, Heliopyrgus domicella, is regular but never common in these foothill canyons. 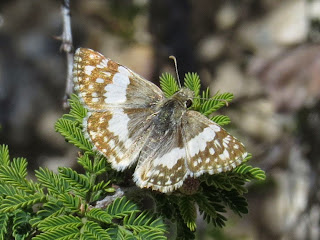 This metalmark, Apodemia sp, is a bit of a taxonomic problem here. It actually looks more like the Mormon Metalmarks of north of here, with a lack of orange in the hind wing, but based on location should be same as the Mexican Metalmark just a few canyons west of here, like the one I saw in Pima Canyon. We saw several, and they all looked like this one. 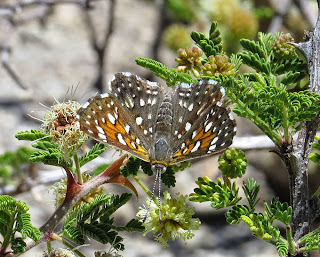 A relatively common, and sometimes abundant hairstreak is this Leda Ministreak, Ministrymon leda, but I saw only two. 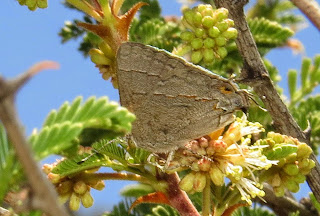 The commonest hairstreak is Gray Hairstreak, Strymon melinus, probably due to the fact that its caterpillars are happy eating a huge variety of plants. I saw a few this morning but failed to get a photo of one that was in pristine condition, unlike this tattered one. 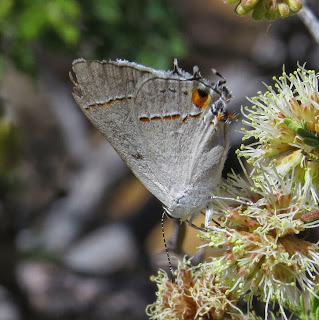 I was not in the least bit disappointed that we missed Soapberry Hairstreak, as I had already had a fabulous morning in good company, and I was not going to have any chance to do any more outings in Arizona until September at the earliest. But with just a hundred yards of canyon bottom left before we got back to the car, Mary called out Silver-banded Hairstreak, and I came running. This is a gorgeous bug, even when rather worn like this one, but I’ve wanted to see Chlorostrymon simaethis in Arizona for many years; I’ve seen it in Baja California Sur, where its host plant is very common. 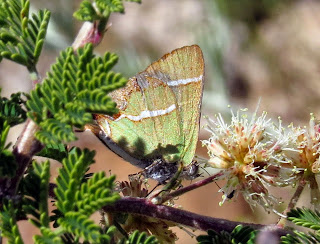 This is a very rare butterfly here, a wanderer far from any breeding population, and it was even a new Arizona bug for Mary (who just three weeks ago discovered Arizona’s first Clench’s Greenstreak). Fred had seen it but twice before in Arizona. Its host plant is also a member of the soapberry family (Sapindaceae), called Balloon Vine, Cardiospermum corindum. Some sources give Faux Persil as an English name, which is rather ridiculous since it’s French for “false parsley,” something that is more sensibly used, by the French, for members of the carrot family that aren’t true parsley, and further the only French-speaking places this species occurs are some tiny Caribbean islands. Here’s the range map of plant specimens from the Southwest Environmental Information Network, showing how far this butterfly was away from where it may have emerged. 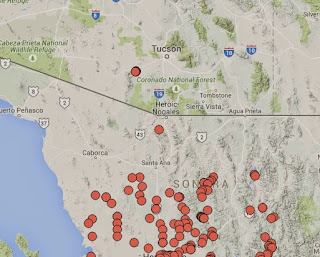 Here are some happy butterfliers still enjoying the moment. 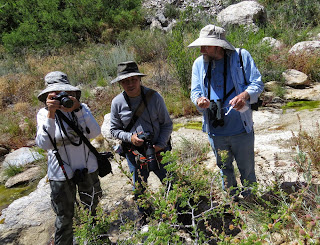