I already posted about some of the highlights from my tour’s visit to Cristalino Jungle Lodge in late June, including Crested and Harpy Eagles, and I also reported from our visit to the first canopy tower, our night walk, and the Boa constrictor that the gardeners and our local guide saved for us. But we saw so much more. Here’s a sampling of what I managed to photograph.

Soon after our flight from Cuiabá to Alta Floresta we were boating up the Cristalino River, greeted by these Capped Herons. 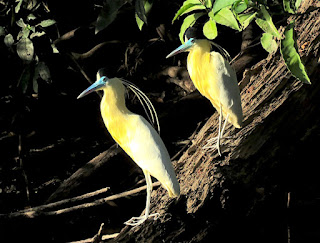 On our second morning, we went to the second tower, where we were greeted by a mixed flock upon our arrival, the best bird being a Yellow-shouldered Grosbeak in the tops of the trees at eye level. Pompadour Cotingas performed nicely with two males and one female within a hundred meters or so, and a Black-and-white Hawk-Eagle gave us a very good fly-by. Screaming Pihas providing the nearly nonstop background music made this tower visit especially memorable. A Banded Antbird was singing not far from the tower when we descended, and with much patience we eventually had good, close views of this outstanding bird. This Ringed Woodpecker came in very close but stayed partially hidden behind branches. 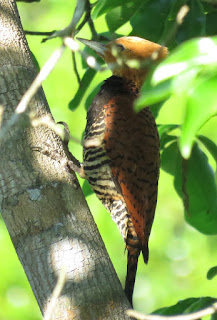 Birding the trails was often quite slow, punctuated at other times by exciting encounters. Perhaps the most exciting was the Crested Eagle on the afternoon of our first full day there, being mobbed by noisy toucans, aracaris, and a Crimson-crested Woodpecker. Here’s another photo that I didn’t post to my earlier blog. 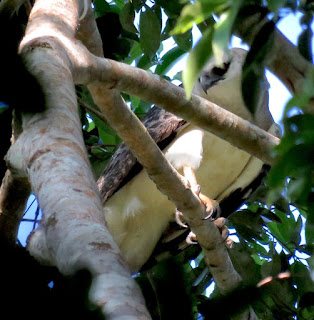 The mixed flocks we stumbled into had some excellent birds, including a family group of confiding Bar-breasted Piculets, while another had a pair of Guianan Gnatcatchers that showed well (at least for birds that prefer to stay in the tops of 150-foot-tall trees). Forest edge flocks were even more productive from the lodge’s clearing, such as the troop of Black-necked and Lettered Aracaris one morning, but some of the favorite birds from the trails came one by one, such as the Slate-colored Grosbeak being sneaky in a vine tangle, a Purple Honeycreeper that paused at close range, a Fork-tailed Woodnymph that buzzed the group, and a Yellow-throated Woodpecker which we only heard, as it gave its frightening yet fascinating, hoarse scream of a call. Along the way, we enjoyed so many other forms of life, from the utterly blue Menelaus Morpho, to the amazing helicopter damselflies hovering in the forest understory, to a gigantic Idomeneus Owl-Butterfly that perched next to the trail. 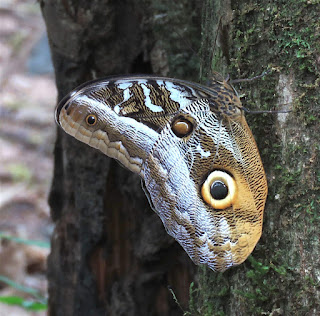 I was quick to grab two different “microteiid” lizards (family Gymnophthalmidae) that scurried in the leaf litter on our hikes, and both were new to me. This one is Iphisa elegans, Glossy Shade Lizard.

This is Loxopholis percarinatum, Müller's Shade Lizard. They are probably both very common, but I’m usually here later in the dry season when there are far more leaves on the forest floor, making such tiny critters impossible to find.

We stopped to look at a busy column of red army ants, probably Eciton rapax, which I had seen in Peru. 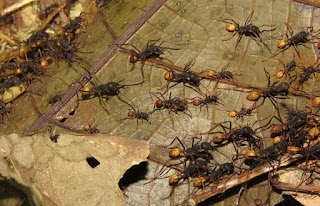 I told my group about the silverfish I had seen living with these ants, so we watched them for a while and found one. Amazingly, one of the photos I snapped got it in focus. It seems that the species known to be with these ants is Trichatelura manni. 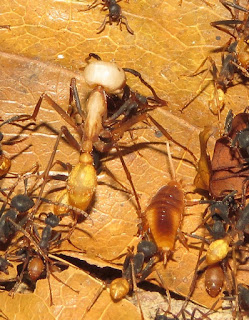 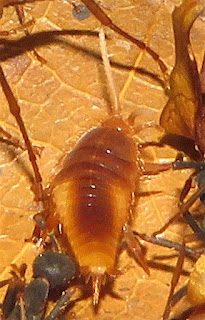 Some of the favorite birds we saw on our several boat rides on the Cristalino River included: the White-banded Swallows, often perched close in perfect light, an Amazonian Umbrellabird that we spotted only moments before it flew, Yellow-bellied Dacnises perched up in riverside trees, a Sunbittern foraging patiently along the rocks, the trusty pair of Drab Water Tyrants almost always near the floating deck, the pair of Band-tailed Antbirds casually poking along the shady shoreline, a Bat Falcon spotted as we were speeding downstream, a group of Wood Storks soaring high on a thermal, and a Green-and-rufous Kingfisher that perched in a perfectly placed shaft of sunlight. The astounding Harpy Eagle was the best bird we had from the boat on the Cristalino. We also ventured to the Teles Pires River, where the river islets eventually produced the local Amazonian Tyrannulets and trusty Ladder-tailed Nightjars, but this is where we had some of our more unexpected birds. One was a Lesser Nighthawk, perhaps seasonal here. Another was this Large Elaenia, surely a bird that winters in this region in low numbers. 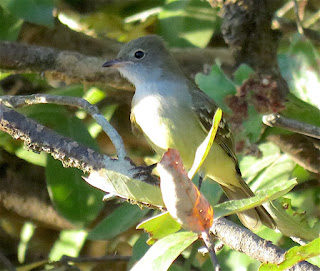 Especially surprising was this Green-tailed Goldenthroat, a very local hummingbird in sandy soil scrub within Amazonia, much more common north of the Amazon River. This is in fact close to the southernmost known occurrence of the species. 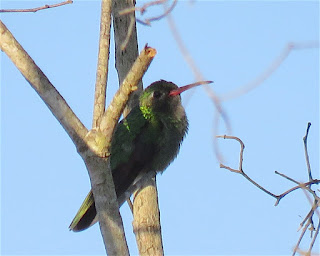 We eventually situated ourselves for sunset in the middle of the Teles Pires river, enjoying also a Black Skimmer and hundreds of Cattle Egrets flying downstream to their roost. 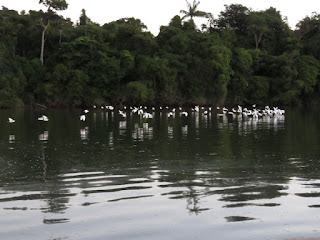 On our way back to the lodge we spotlighted several Spectacled Caiman and this Boana calcarata, Troschel's Treefrog, in a small patch of water-hyacinth. 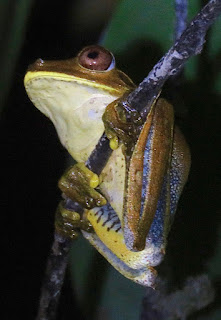 Highlights from our hike to the Serra’s granite dome included a Natterer’s Slaty-Antshrike as well as several hummingbirds here and nowhere else. Other favorites were two great puffbirds: Spotted Puffbird… 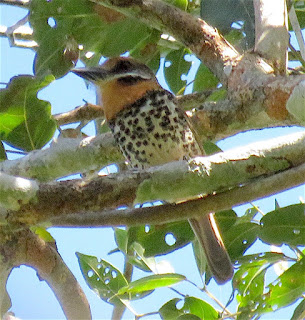 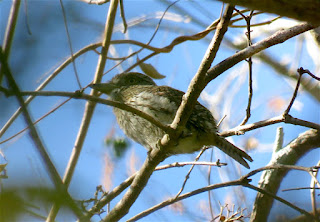 I never see many orchids blooming at Cristalino, so I was excited to see one right at the Serra overlook. Thanks to some sleuthing by my client-friend Lisa Li, it turns out to be Trichocentrum sprucei, new for the Cristalino plant list. 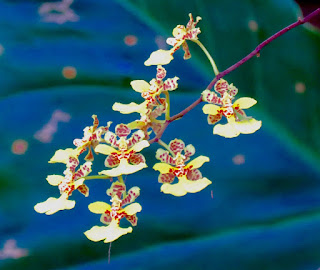 One of my favorite finds was this White-bearded Hermit nest right next to the old guides' dorm. I had spotted the empty nest while looking for the usual roosting tent-making bats in the small patch of giant Phenakospermum guianense bird-of-paradise plants, but I had to return at night to find out who the owner was. 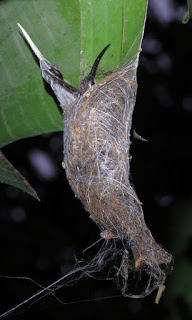 We squeezed every last drop out of Cristalino on our last morning, watching a Gray Elaenia in the spotting scope from the deck, finding a pair of Rose-breasted Chats building a nest atop the midrib of a giant palm leaf, coaxing a pair of Spix’s Warbling-Antbirds to show themselves well, and enjoying a noisy group of Red Fan Parrots making their odd noises from exposed perches in the Secret Garden. 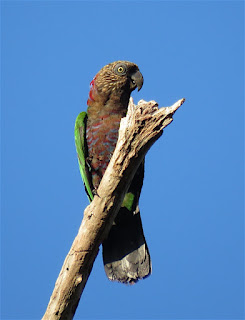 Even during our travel to the Pantanal we saw some nice birds, such as Guira Cuckoo in the pastures en route, Swallow-tailed Kite and charming Thrush-like Wrens in Alta Floresta, a Toco Toucan at a fuel stop, and a rare Pied-billed Grebe (rare this far north and inland) in a roadside pond. 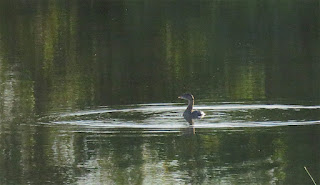 We finished the day with this brilliant South American Tapir along the entrance road to our lodging at Pouso Alegre. 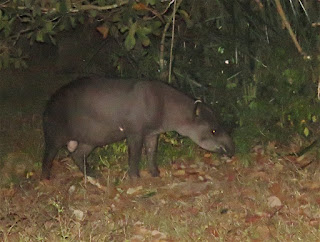 Posted by Birdernaturalist at 7:42 PM