After my Costa Rica tour I flew home, repacked and spent just one night in my bed, then early the next morning headed to the airport for my flights to Ecuador. I had agreed to be a substitute leader for Steve Howell who had to cancel for health reasons, and all the participants of the tour were committed to doing the tour even without Steve. The tour fell exactly between my tours in Costa Rica and Oregon, and just last October I spent two weeks there. I was also the only WINGS tour leader available, so it only made sense for me to cancel my plans for the break (which included birding and camping with friends from Oregon as well as volunteering for the Tucson Birding and Nature Festival), and do everyone a favor (and earn some money). 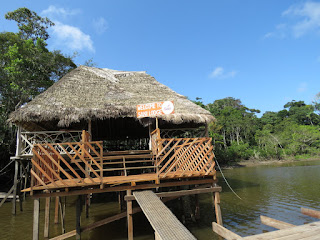 My “From the Field” submission was brief:

“There may not be any pronounced dry season on the Equator in the Amazon Basin, but if there was one week-long dry spell this year, we found it. It was typically hot as usual in the tropics, but that was an even tradeoff for not being forced to take off any time due to rain. It was a wonderful week that passed by all too quickly, filled with great birds and some incredible tropical diversity in the way of lizards fighting on trees, killer mushrooms invading insect brains, and a very friendly and almost even loving Amazon Tree Boa (…of which I neglected to get a photo).

“We saw some marvelous birds at the canopy platform, such as a perched Orange-breasted Falcon and Yellow-billed Nunbirds, while along the various trails elusive species such as Collared Puffbird, Wire-tailed Manakin, and Black-faced Antbird performed well. Super delightful were the several boat rides on the lake (cocha) and stream (yacu), where rare kingfishers such as American Pygmy and Green-and-rufous were ridiculously abundant and easy to see. But we didn’t have to go far from our rooms (or the lodge’s bar) to enjoy some of the best birding in the area – all of the following photos were taken right around the lodge’s buildings.” 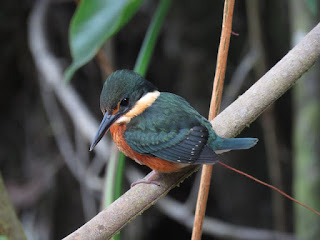 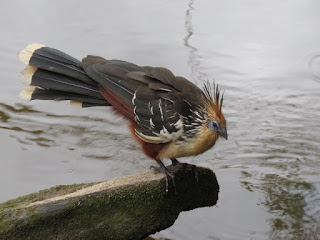 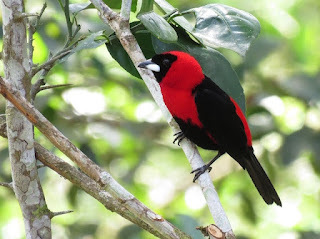 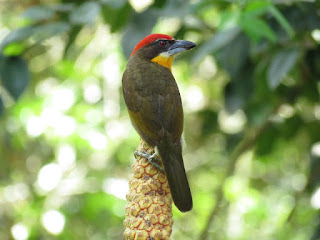 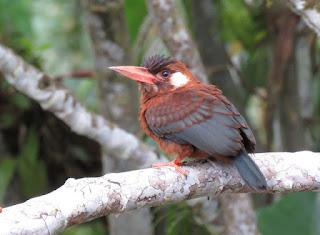 The following video is a montage of more things we saw right near the lodge, from the boat, the dock, and the bar.

This pair of Tropical Screech-Owls roosted in the same place every day by the dock. 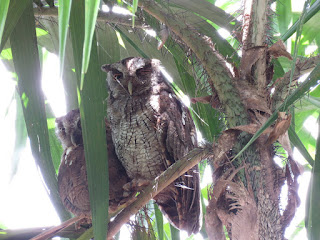 But of course in a week’s tour one sees so much more. We took boat rides on the oxbow and narrow streams, hiked trails, and climbed the to canopy platform at least twice.

This Collared Puffbird appeared for us on our very last morning’s walk on the trail system behind the lodge. 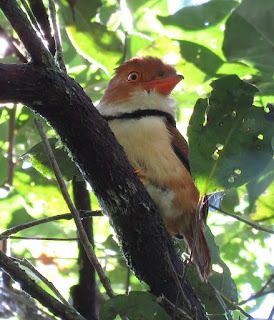 I had to get some video that shows the typical puffbird behavior – very staid, but alert and constantly puffing up its feathers.

The best bird from the tower was spotted by one of the participants who simply asked “what is this bird?” By far this is the best view I have ever had of an Orange-breasted Falcon, the rarest falcon in the Americas. (I saw one perched more distantly in May 2001 in Bolivia, and had one fly over a gap in tall forest in N Brazil two years ago.) 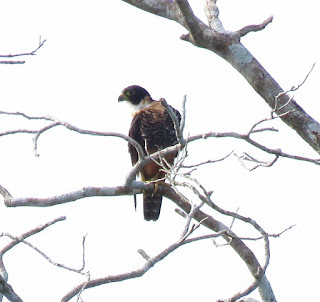 But in general, my participants had little patience or interest for anything that wasn’t a large, colorful, tropical bird. My first hint this might be the case was when I gasped in excitement at this beautiful Arctiine moth on the shore of the Napo River when we arrived, and not a single person bothered to pause or lift their binoculars. (At least they were all really nice people who I otherwise enjoyed getting to know.) I’m sure this moth is not rare, but I haven’t managed to find a picture match or name for it. 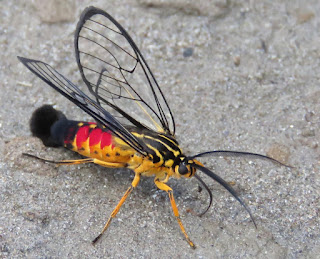 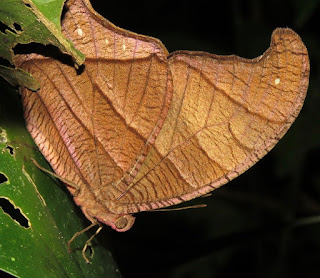 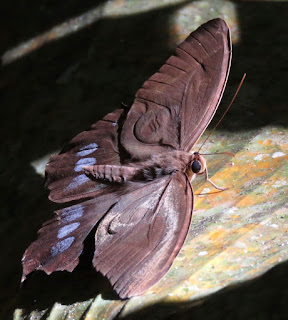 The flooded stands of the giant aroid Montrichardia linifera along the streams are the reliable habitat for the stunning metalmark Helicopis cupido. 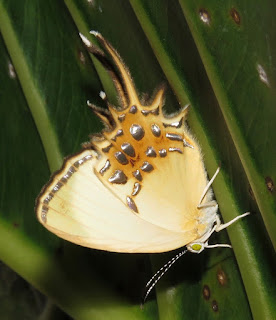 This kite-swallowtail Protesilaus glaucolaus was on the bank of the Napo when we departed, but I had to sneak in photos while everyone waited. 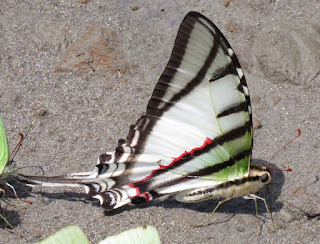 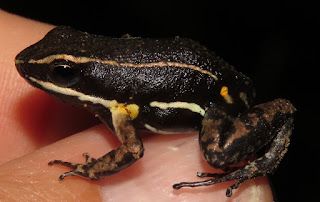 This Anolis transversalis was on a tree as we returned form the tower.

Night walks weren’t of that much interest to the group, and I found this treefrog Boana geographica on of my solo night wanderings.

This Pristimantis limoncochensis was a lucky find on one of the more distant trails. 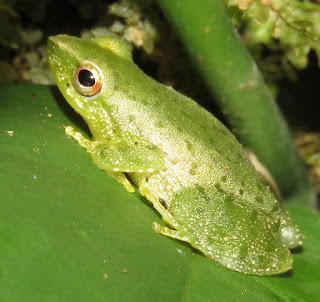 For me, this treerunner Plica umbra was one of the more thrilling finds, just down the trail from our lodge as we were returning one morning. 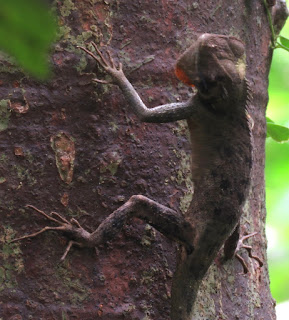 I wanted to stay to watch this most dramatic (and very rarely seen) encounter to see what happened, but everyone was quite visibly bored with the whole thing and after just a few moments wandered off down the trail. I should have stayed to watch the end of it.

Bugs were yet another thing – most of the participants had no interest in or even were quite vocal in their dislike for insects or other invertebrates. Two of them nearly upturned the entire dinner table when an utterly harmless insect was attracted to the lights and landed nearby. Even then I managed photo of a few amazing critters during breaks in the birding and on my night walks. This peanut-headed bug, Fulgora laternaria is usually a huge crowd-pleaser, but not with this group. 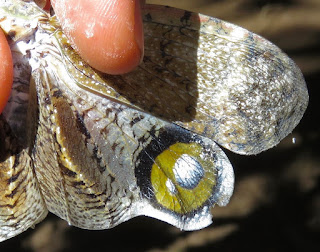 This is a rich area for odonates, most of which I don’t know. Thanks to the Facebook group dedicated to Neotropical Odonata, I learned that this damselfly is Aeolagrion inca.

I took close-ups of three harvestmen I found on the trail one evening. They are surprisingly beautiful up close. 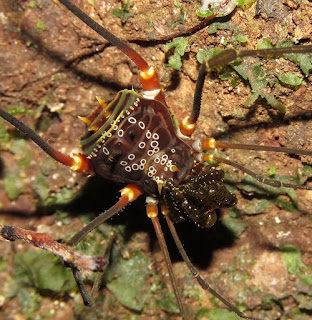 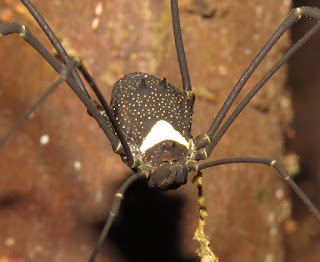 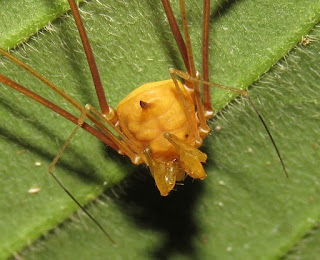 Here’s another thing I know very little about: spiders. I know enough to know that most don’t weave a typical web, and some have some amazing ways of catching their prey, such as the bola spiders. I think what I’m seeing here are similar lines of silk hanging like traps from the underside of leaves, with blobs of sticky liquid silk near the ends. I never did find the spider responsible for them. 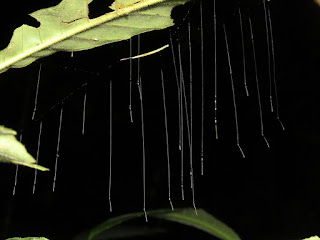 Some of my group did join me for one night walk, and they were super lucky to see this mouse opossum Marmosops noctivagus, the ID confirmed by mammalogist and tour leader Fiona Reid, a Facebook friend of mine. 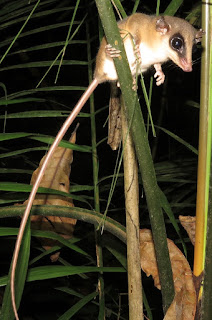 The plants were lovely and interesting at Sani Lodge. This is Aphelandra aurantiaca, a member of Acanthaceae, and a genus known for some fancy house plants. 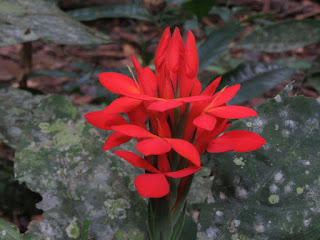 Nautilocalyx lucianii is in Gesneriaceae, another houseplant family most famous for the African violet and gloxinias. 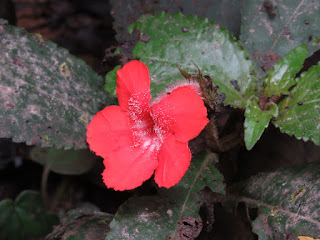 I know this cauliflorous tree is in the legume family, but I don’t know what it is yet – it was common along many of the trails and just starting to bloom. 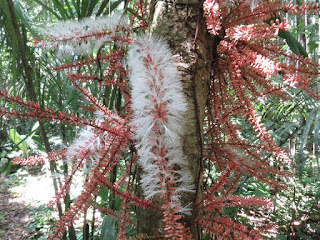 Finally, here is a spectacular flower if you like odd plants: Ombrophytum peruvianum. It lacks chlorophyll and is a root parasite in the family Balanophoraceae. 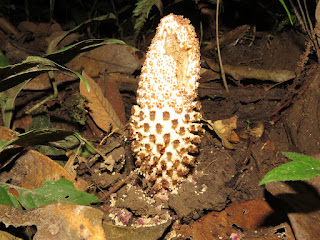 Posted by Birdernaturalist at 5:32 PM