Today is my actual 50th birthday, but for me, it’s like every day here is my birthday.

I joined the more intense birding group today for a ride upriver to the Hoatzin lagoons. It was hard to get going though, as everything is new for everyone, and there was a burst of bird activity right at the dock. We added lots of birds here, but the best by far was this male Festive Coquette, which perched several times halfway up the canopy. It was Sidnei’s first ever, and when I looked up my info, it turns out I had the first two photographic records from Cristalino. It’s a rarely seen bird here. 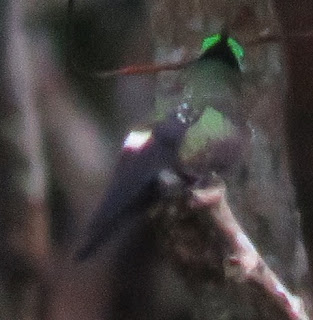 We then kept stopping for birds along the river, including Band-tailed Antbird and Speckled Spinetail. When we stopped for the latter, we found this group of Morpho telemachus caterpillars, which I had only ever seen in the late dry season. 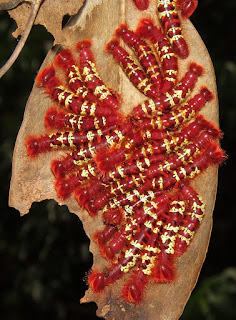 We also had this stick hopper, family Proscopiidae. 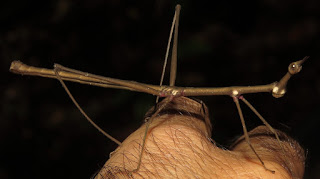 And as we had paused under a blooming tree, I noticed this rarely seen metalmark, Isapis agyrtus, with only one previously confirmed photo from Cristalino. 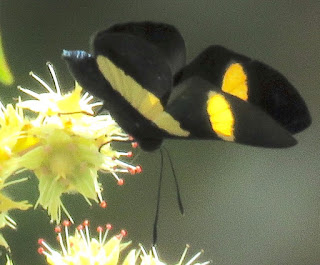 We finally arrived at the lagoons and saw Hoatzin in good time. This Rufescent Tiger-Heron was striking its sun-worshipping pose, the first time I’ve seen this species do this. 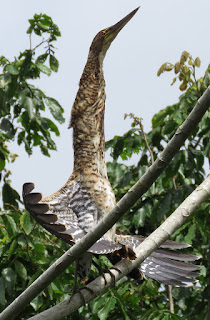 The lagoons are great for odonata, with most of them perching on the rafts of water-hyacinths. This is the dragonfly Diastatops pullata. 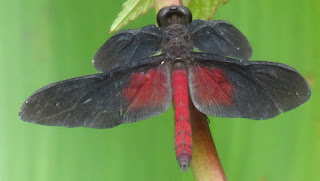 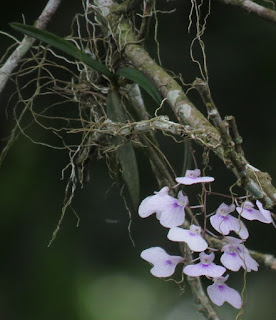 On the way back, we stopped to figure out a raptor flying over, and only several days later did I look at my photos, pass them around, and come to the consensus that it had been my first Broad-winged Hawk for Cristalino!

Even the birders were happy to stop for monkeys – we had 2 or three family groups of these White-whiskered Spider Monkeys, Ateles marginatus. 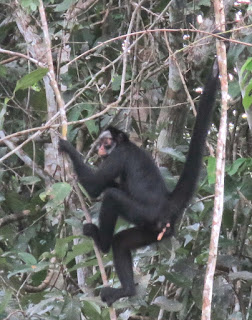 When we got back, we heard some bad news – Cathy, who was with the group I went with yesterday, slipped on the tower steps and hurt herself early this morning. The steps had been wet with dew, and she had gone fast up to the top ahead of the rest of the group. When she slipped she quickly grabbed whatever she could, and her hand found something sharp, cutting her pinky finger so badly that she had to be taken to the hospital. Long story short, that evening she was flown to Goiânia where she was operated on. Then 9 days later she and Gabe were allowed to fly home. Last I heard she had full use of her pinky (even if no feeling) and was continuing physical therapy. We were all super sad that they had to cut their vacation short after just one full day at Cristalino. And I felt fortunate I had chosen to go with their group yesterday and got to spend time with them.

I didn’t go out in the afternoon with any group, mostly relaxing in the room and working on photos. When I came out to the deck in the mid-afternoon, the kayaking non-birders had already returned and were swimming by the floating deck. Their guide Jessica quickly came up to me and said “Come! Diego found an Emerald Tree Boa!” I just about melted there on the spot. When I had arrived on December 29, I had put the word out to all the local guides and boatmen that I had two special requests – I wanted to see a Bushmaster and an Emerald Tree Boa. The former is very rare, but seen occasionally, maybe once a year. It’s kind of the jaguar of the snakes – large, rare, and in mostly in areas of undisturbed, old forest. The latter is probably much more common but extremely rarely seen, as they are green like the leaves and live mostly motionless, high in the canopy. I was aware of only two sightings in some 30 years at Cristalino. Diego, who has been working here full time for several years, had never seen one, and while he was readying the kayaks for the group a couple kilometers upriver spotted this one roosting right over the bank at eye level. Stretched out, it’s probably not much more than a meter long, if that. The southern and western forms have been split from the Guinanan Shield animals NE of here, so this one is now known as Corallus batesii. What a stunning beauty. 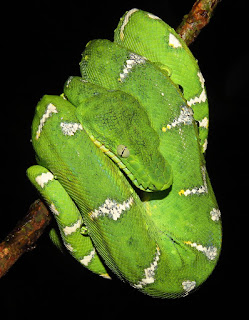 Christoph was at the dock right when we were loading up to see it, so he joined me, Jessica and Diego for this fabulous, most unbelievable birthday present. 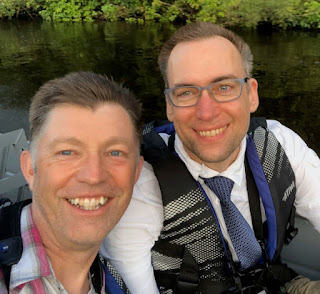 The rest of the evening was a splendid happy hour and dinner on the floating deck put on by the unbelievably hard-working staff at Cristalino.
Posted by Birdernaturalist at 6:00 AM