The weekend before last was a like a splurge of birding for me – I was out watching birds away from my north Eugene yard on four consecutive days. It pains me to imagine what rarities I missed adding to my yard list, but I had a memorable time. This spree was spurred essentially by a pelagic birding trip organized by Tim Shelmerdine’s Oregon Pelagic Tours, for which I’ve been on the waiting list for over a month. But with a week to go, I was notified that a space had opened up. So, with the Christmas Bird Count season coming up and social distancing still an important way to prevent viral spread, I rented a tiny car for an entire month.

Weather this time of year makes pelagic trips prone to cancelation, and that’s what happened to the October 24 trip. Luckily, this one on December 5th was declared a go, though the weather forecast was changing by the hour, and everyone was at least mentally prepared for a day’s delay. We got out to 32 miles, where the best bird activity was at a larger fishing boat that seemed to be hauling up traps. Huge numbers of Northern Fulmars, several kinds of gulls (mostly Glaucous-winged, California, and Herring), a few Black-legged Kittiwakes, and good numbers of Black-footed Albatross were after the bycatch that the crew flung overboard. Among the birds was a single Laysan Albatross, but it didn’t hang around for long. Here are just a few photos from that one spot.

I stayed over at my dad’s in Corvallis that night, and the next morning went up to Marys Peak with my friend Hendrik. The weather was amazing, and in conditions like this, the highest point in the Coast Range in Oregon is always a lovely place to be. 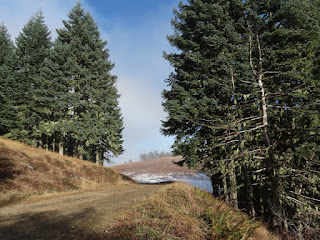 We were really hoping to connect with a couple vagrants that have been reported in recent weeks, namely White-winged Crossbill and Black-backed Woodpecker, neither of which were documented by photos or sound recorded and haven’t been relocated since. Hendrik’s first attempt to re-find them resulted in his discovery of Pine Grosbeaks, which I also really wanted to see as it would be a state bird for me, but none of these birds seemed to be around in the late morning. We did see the 15 Gray-crowned Rosy-Finches at the top, and a Northern Pygmy-Owl at the parking lot was nice to see.

After Marys Peak, Hendrik and I continued to Dawson Road in the southern part of Benton County to look for reported Ferruginous Hawks, but it was too calm and sunny, and the field, though full of hawks (it’s a banner year for voles in the Willamette Valley), was beset by a heat shimmer that made anything beyond 300 yards practically unidentifiable. Most of the bird were much farther than that, though we managed to pick out a few Rough-legs, Red-tails, and of course the constantly flying Northern Harriers.

I decided to stay another night in Corvallis and work my way back to Eugene via the Oregon coast, for a third day of birding. Little did I know that I would be spending the entire day birding in just Lincoln County, but you know that time flies when you’re having fun. I checked spots in Newport and Nye Beach known to have hosted passerine vagrants in past years, then north to Devils Punchbowl State Park, a little headland offering some seawatching as well as the small community of Otter Rock with a chance of some stray land birds. A Rock Sandpiper below the parking lot, hanging out with Black Oystercatcher and Black Turnstones was good to see.

The neighborhood was full of birds, and Anna’s Hummingbirds were especially abundant. My best find was an immature Rufous Hummingbird. In all honesty, I can’t 100% rule out Allen’s Hummingbird, but that would be a million times rarer, and I’d only be tempted to call it that if the bird had obviously narrow outer tail feathers and some rufous edging in the rump. I think one of my photos actually shows the little indentation near the tip of R2, the second-innermost tail feather, which is a good feature for Rufous Hummingbird as well.

Another interesting bird I found was this sapsucker, which is at least mostly Red-breasted Sapsucker. The locally breeding (nominate) subspecies has a solid red head with none of these black areas or white lines, and this bird superficially looks like the ones that breed in the southern Cascades south through California, subspecies daggetti. That would seem very unlikely, and my guess is now that this is actually a hybrid (or intergrade) of our nominate subspecies with Red-naped Sapsucker, a combination that seems to be rather common and would originate anywhere on the east side of the Cascades of Oregon, Washington, or British Columbia. These birds surely have some southbound migratory movements.

I made a few stops on the outer coast as I worked south towards Florence, but the pounding surf had created a salty fog-like mist at every viewpoint. I always like to check the gulls bathing in the mouth of Beaver Creek at Ona Beach State Park, and this is where I spotted this Iceland Gull (formerly split as Thayer’s Gull).

Unusually confiding was this native cottontail, the Brush Rabbit, Sylvilagus bachmani. Interestingly, this mammal has the almost the exact same distribution and biogeography as the Wrentit, even matching the Columbia River as the utter delimitation of its northernmost distribution. (There are a few erroneous iNaturalist submissions from Washington that I’ve attempted to correct.)

My last stop was in Yachats, where a lot of humans found the pounding and frothy surf to be particularly attractive. I was pleased to spot a lone Bonaparte’s Gull working the foam for tidbits and found a flock of about 90 Surfbirds on the rocky ledges. Scattered here and there were Black Turnstones, this one doing its own thing well above the waves.

When I got home that day, I read about reports of Pine Grosbeaks being relocated on Marys Peak, and it seems that like previous reports, getting up there early was the trick. So I left home at 6:00 a.m. for my fourth day of birding, arriving just after the start of civil twilight. And before it was light enough to see well, I heard the distinctive call of a Pine Grosbeak. For the next 40 minutes, I heard one off and on, sometimes even hearing wings hitting the needles of firs, Douglas-firs, and hemlocks. Finally, only after another birder (my friend Stefan Schlick from Portland) arrived did we hear them call repeatedly, and then we spotted them on top of a distant Douglas-fir. A while later, just after more birders arrived, they flew over the road and landed in another Douglas-fir right next to the parking lot, and five of us then enjoyed prolonged views of four birds nibbling on needles. This is an extraordinarily rare bird in western Oregon, but it’s a huge finch year in interior North America, and there’s a good chance these birds came from that huge exodus out of Canada.

There were more birds in Benton County that would be new for my ancient and limping county list, so I drove down the mountain to the Philomath Sewage Ponds, where it appears I missed seeing the Tufted Duck by just four days, though it had been seen almost daily for the past three weeks. However, I did finally catch up with Tricolored Blackbird, a rare bird anywhere in western Oregon, though one to a few have been found here in winter every year for some time (but all since I had moved to Arizona).

The sparrow patch here has been faithfully seeded by several birders over the years, though this morning there wasn’t much. When I pulled up in my car, there were only a couple Song Sparrows and no seed. They heard me coming though, and I was prepared with a bag of seed in the car. Within moments of my scattering a few handfuls, there were more Golden-crowned, White-crowned, Song, and Fox Sparrows than I could count, and a covey of California Quail also came right in.

The fog was starting to finally clear nicely, so I headed back down to Dawson Road on my way home and found one of the Ferruginous Hawks quite close to the road. It went after a vole, probably caught it, and then flew to a line of Oregon Ash trees to the north, where I watched it in the scope for several minutes. This species has occurred in Benton County only a few times; the last was in 1997, and before that 1990, and I didn’t see either of those birds. This winter there were three seen in one day (two in this field and one by the airport), as well as one just a few miles east of here in Linn County, a truly unprecedented number for this short-distance migrant that typically prefers much drier climes and more treeless regions.

Posted by Birdernaturalist at 3:50 PM