A Visitor from Canada in the Brush Pile 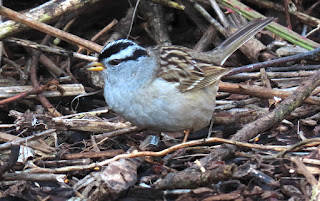 On the bright and frosty morning of March 30, I spotted what is quite likely the most unusual bird I have seen in my yard so far (having lived here in north Eugene for a year and seven months). The only real rarities I’ve had so far have been Lark Sparrow (a common bird only in eastern and far SW Oregon), and a Yellow-bellied Sapsucker (a state-wide vagrant that was a one-day wonder). No, this bird wasn’t a vagrant, though it was much rarer than either of those two: it was the White-crowned Sparrow pictured above, and while this species doesn’t usually strike one as being out of the ordinary, I draw your attention to its right leg.
I nearly shrieked out loud when I saw it. I’m not really well-connected to the bird banding community, though I enjoy banding and have personally banded several hundred birds (including over 500 in one single, insane morning on an islet in Germany’s Baltic Sea 24 years ago). But I am fairly confident that no one is banding in my immediate neighborhood. And I’m quite aware of how rare and exciting the random sighting is of a banded bird in the wild, especially a passerine. This bird was present all this day and the next, and I snapped over 700 photos in the first few minutes. Fortunately, this bird was unafraid of my presence as I sat comfortably on my deck chair while it scratched around my brush pile, foraging on seed that I frequently scatter on the ground. The band was loose enough that it moved around, and the sun was bright enough that I was able to get a fast shutter speed, and I also knew to underexpose the shot by at least two full stops in order to not “burn” the image of the reflective band. 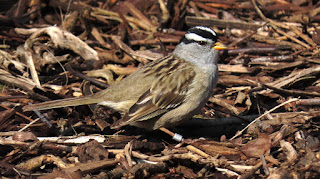 Out of all of those images, I needed no more than three in just the right poses to be able read the entire nine-digit number. I entered the data on the USGS website https://www.pwrc.usgs.gov/bbl/bblretrv/, and instantaneously I had an automated response:
INFORMATION FROM OUR FILES:
Species: Puget Sound White-crowned Sparrow
Date banded: 04/20/2018
Banding Location: NEAR RICHMOND, BRITISH COLUMBIA, CANADA
Age: HATCHED IN 2016 OR EARLIER
Sex: UNKNOWN
Richmond is a southern suburb of Vancouver, and the age of the bird at the time of banding shows that it will be at least five years old this summer. I’ve been watching the brush pile assiduously all winter, and especially in the past week inspecting the leg of every bird, and it’s definitely a new bird as of March 30 and was here just two days. I’ve been hoping to receive an email directly from the bander, as surely they’re at least as excited as I am to have such an amazing band recovery. They must have received the same automatic email that I did, and they would probably be the only one who might have answers to the many questions that this sighting leads to. The only question that this sighting answers is “do any of the White-crowned Sparrows we see here in March come from Canada?” But I wonder where this bird spent the winter. I wonder where it was going to. Does it return to the area where it was banded every year? Are there other sightings of this same bird? Have other banded White-crowned Sparrows from this part of BC been spotted elsewhere? Unfortunately, the USGS reply doesn’t tell me who banded it, and eleven days later, I’ve heard nothing. I'll post here should I receive any news.
Spring has sprung, and birds are on the move, and seeing the changes is fun. I’ve had just two immature White-crowned Sparrows all winter, and one had started molting in the black into the brown head stripes well before the other. Starting a few weeks ago, they were joined by an adult every few days. Finally, as of today I have three adults and one immature; one of the adult-plumaged birds is probably the more advanced immature that I slowly watched molt in, while the same lagging immature was here until about two days ago. 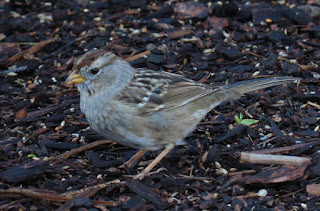 And also suddenly as of April 8, there is a new adult in the yard, a very loudly and persistently singing bird that has the classic NW Oregon pugetensis dialect. 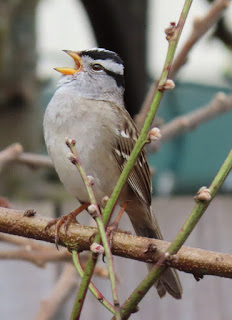 I’ve had one Lincoln’s Sparrow call the brush pile home all winter. Suddenly on March 4 it was joined by a second bird, though they don’t tolerate each other’s presence in the same brush pile for long. As of this morning, at least one is still here. 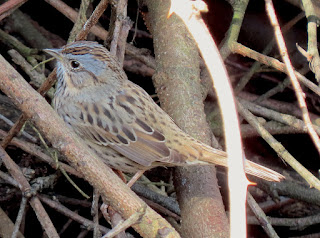 I had a single Fox Sparrow all winter too. A second bird popped in briefly and wasn’t tolerated on March 12, then March 28 was the last I saw of my winter bird. A single Song Sparrow has been here as well every day, last on April 3. It did not like the Lincoln’s Sparrow, and it also regularly chased only one of the White-crowned Sparrows.
Eleven Golden-crowned Sparrows rounded out the brush pile flock all winter, but there’s changeover there too. I now have five, and since I didn’t notice much molting going on, it’s quite possible that the five stunning alpha-like adults now are totally new birds, while the immatures all moved on to molt farther north. 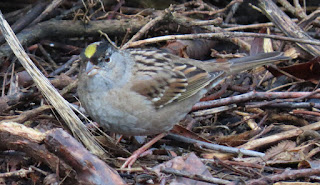 And it’s also a bit sad to see the Dark-eyed Juncos move on to breed in more forested habitats. I had over 40 all winter, though they don’t mind forging in the open and were much less bound to the brush pile. There are fewer than 10 left this morning, and while I’ll miss them, they’ll be back soon enough next fall, and I won’t miss the chore of scattering seed for them all over the yard. This "cassiar" junco has been here all winter. It's like a Slate-colored with a more contrasting dark hood.

I like to say I won’t miss the Pine Siskins. There are still over 40 in the yard this morning, and they are swine, shoveling food out of the feeders and edging out the shier American and Lesser Goldfinches. But their presence and sounds are cheerful, and I’ve enjoyed hearing all the species they mimic in their jumbled song. The other day I recorded one doing a very good Olive-sided Flycatcher. 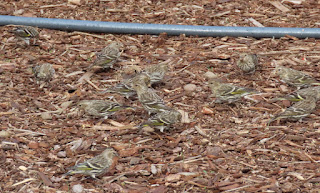 March also saw a lot of movement of Red-tailed Hawks and Bald Eagles, but overhead, not in the brush pile. Only once did I see them in the same patch of sky, and the frisky hawk decided to harass an eagle. 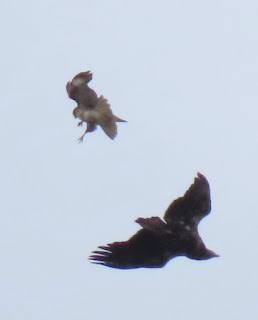 Posted by Birdernaturalist at 10:50 AM