I’ve been home just two days from my two wonderful tours to southeastern Peru, and I while I was excited to see how my garden has progressed (or aged, as the case may be) as fall approaches, I was also not quite ready to leave Peru. I wish I had had just a few more days to explore more trails and squeeze out a few more species. The rainy season was just barely starting, and plants were beginning bloom, birds were nesting, and more insects were emerging.

My second tour visits two rainforest lodges of the department Madre de Dios. It was an abrupt but delightful change of pace from the first Peru tour, where we had been mostly in mountains of the neighboring department of Cusco. For one, it was warm and humid, though on two days we were under the influence of a late cold front, when the overcast skies and cooler temperatures were quite welcome.

The tour ended with an impressive total of about 375 species of birds. And though no one took part in both tours, my 20-day total came to about 650 species. This second tour was supposed to have six participants, just like the first one, but for various reasons, four of the participants canceled, leaving just two – my friends Dana Gardner and Michael Chinn from Berkeley, California. So this was much more like a private tour with friends than a regular WINGS tour, and I think we all benefitted from the flexibility that entailed. 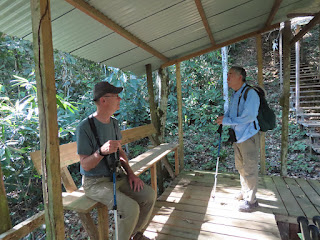 Unlike the first tour, which involved a fair amount of driving, we walked every day, piling on the miles, but one of the most enjoyable aspects of this tour is being able to bird right outside our rooms. A surprise for me here was that two of the cabins had been completely dismantled. A few feet of the overlook had sloughed off in June, and it was deemed that these two cabins were too close to edge in the event that an even larger chunk of earth might collapse. 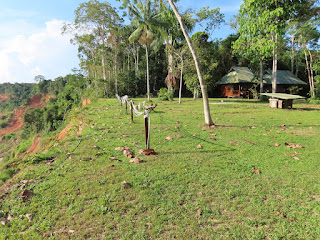 We were walking by our cabins one morning when we heard a ruckus from inside a dead, hollowed-out palm trunk, and we looked up to see this Tawny-bellied Screech-Owl indignantly poking its head out of the top. 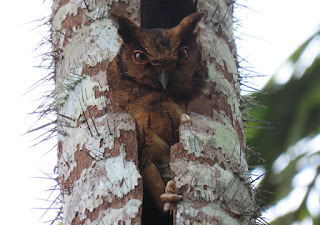 Another treat was walking the same trails on multiple days – and discovering how different they can be from one day to the next. On our first pass by a large tree dropping red fruits to the ground, a group of Pale-winged Trumpeters approached and put on quite a show. The next time we passed there, a stunning Plum-throated Cotinga sat just under the canopy for extended views. This is the fruit of Pseudolmedia laevis in Moraceae that attracted so many birds. 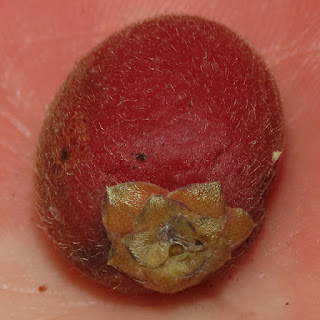 And on a third visit we flushed a Ruddy Quail-Dove off its nest with two eggs, right next to a stunning cannonball tree (Couroupita guianensis) that was dropping its flowers all around the tree. 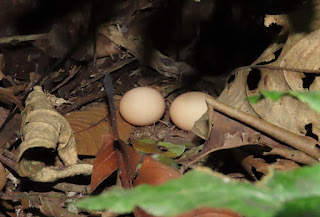 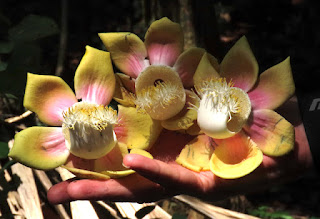 And yet on another pass on the same trail, this female Cream-colored Woodpecker perched at eye-level very close to the trail and sat there for an extended time, seemingly unafraid of our presence. 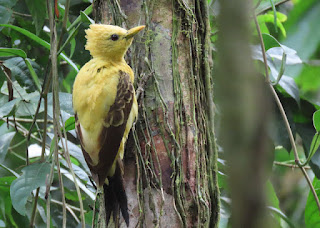 We birded one of the closer trails to the lodge several times in search of its bamboo specialties, and we were surprised on one morning by a pair of very quiet Rufous-capped Nunlets low in the vegetation right off the trail. 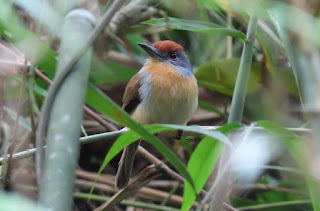 Then again there were some reliable birds, such as the lek of Band-tailed Manakins which showed well when we stood still near their favorite display area, and on our second stop they were even more cooperative. Or the pair of Great Jacamars that we found along the same stretch of one trail on several days. We suspected they might have had a nest nearby. 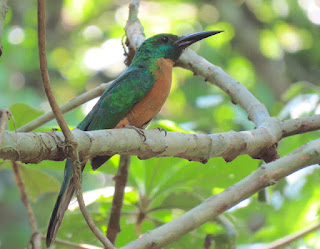 One surprise at Los Amigos was a rare Brown-banded Puffbird that flew in quietly while we were scanning the canopy for a singing Western Striolated-Puffbird (which we ended up seeing on another day). This was my first for Peru. 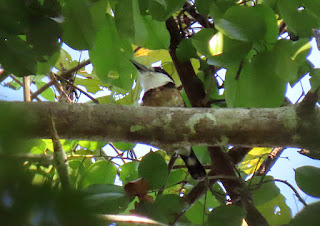 Another was the scarce and very unpredictable Amazonian Parrotlet, which if found is usually just a quick-flying flock through the canopy. This year we saw pairs and multiple small flocks on five days, perched in trees and feeding right over the trails, offering great views of this bird that Don Stap wrote about in his popular book A Parrot Without a Name. Here are two in a fruting Guazuma crinita tree, apparently one of their preferred foods. 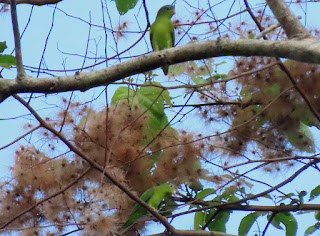 The last days of birding at Tambo Blanquillo Lodge were a nice change of pace, starting with a long boat ride to get there on the Madre de Dios river. We spent most of a morning at their famous clay lick. It was a thrill to see a flock of about a hundred Red-and-green Macaws take off in a deafening flight. They never did come down to feed on the dirt, but many other species did, including this collection of Blue-headed, Orange-cheeked, and Mealy parrots. 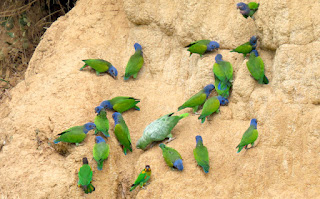 We had a delightful paddle around one of the oxbow lakes, where a Pale-eyed Blackbird finally appeared. 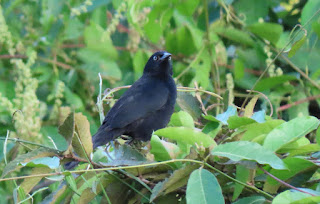 We also saw dozens of Hoatzins, Greater Anis, and a Sungrebe, and many other species presented themselves. A favorite bird of the tour and a very lucky find was this lone Green-and-rufous Kingfisher, perched typically in the deep shade of the overhanging vegetation. 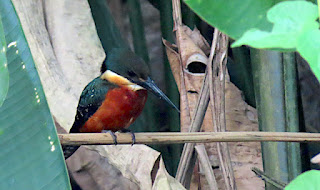 We also saw a fantastic variety of butterflies and other insects, frogs, and mammals, including nine species of monkey, many in abundance. Along one trail we looked up into a tree cavity only to see this sac-winged bat scramble out and perch in plain sight on the trunk. 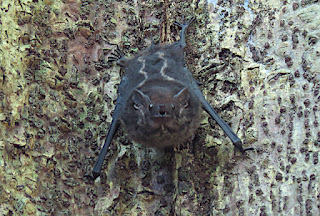 The station science coordinator at Los Amigos was very generous with his time, and he showed us this White-lined Leaf Frog that had been roosting on the same leaf for a few days right by the office; here it is in the evening setting off to forage. 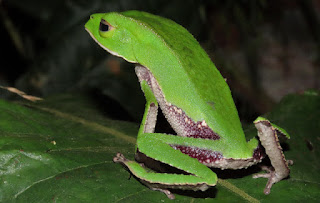 Of the many insects I photographed, this long-horned beetle Discopus spectabilis (identified for me by iNaturalist user chickenparmesan24) was one of my favorites. 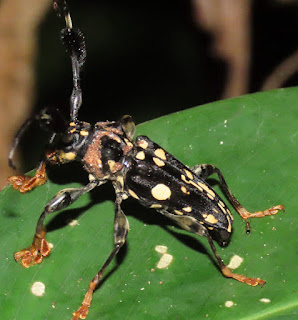 Posted by Birdernaturalist at 8:58 PM