I’ve just returned home from an 18-day private tour with a single client to Brazil, from southern Amazonia to the northern Pantanal, crossing the great watershed divide between the central Atlantic (Amazon River) and southern Atlantic (Paraná River). My tour participant, Susanne Sourell, is actually a very advanced amateur fungus expert, and we’ve been on several tours together. She knows much more about finding and identifying fungi than I do, so I while I was often able to help find them and co-marvel in their amazing beauty and diversity, I pointed out birds, plants, and all kinds of other things – which was a lot. Maybe I’ll post more blogs on those later, but for now I just wanted to share a few of the photos of the incredible mushrooms we found.

Most people think of the shape of these gorgeous Green-spored Parasols, Chlorophyllum molybdites, when they hear the word mushroom. 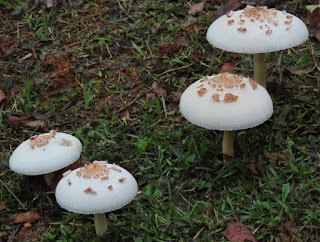 This delicate, little Leucocoprinus sp. is clearly shaped like a typical mushroom, but you have to get on your hands and knees to see them. 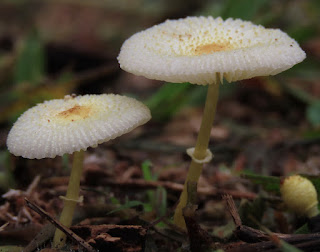 Some grow in very attractive arrangements, like this Marasmiellus volvatus. 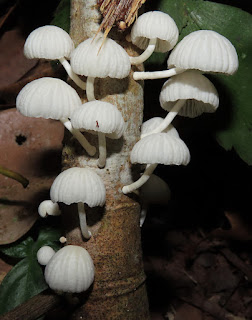 But a mushroom is any kind of external fruiting body from a fungal organism. As you look at these photos, keep in mind that the main, functional part of the organism known as a fungus is otherwise largely hidden from our view as it grows, feeds, and interacts with its environment (including with other organisms). The mushroom itself is only a very small – and usually very temporary – part of the organism, which can be huge and live for many years. And with the incredible diversity of fungi, you can imagine there must be an equal diversity in fruiting body types. Sometimes you just have to look very closely, such as at this Favolaschia species, just a few millimeters across. The undersides remind me of the spaces in a waffle. 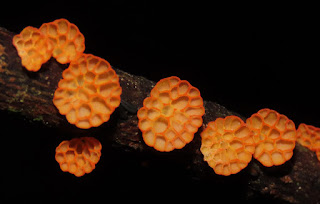 Look even more closely at tiny things growing on the thinnest twigs and dead leaf petioles, and you discover things that barely look like mushrooms. This might be in the genus Trichoderma. 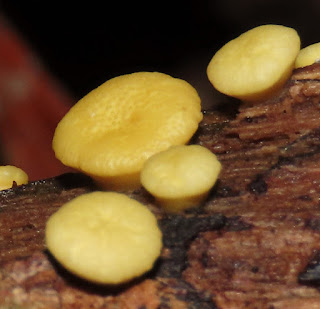 There were some bizarre things that are somewhat familiar to me, such as this Tremella sp. 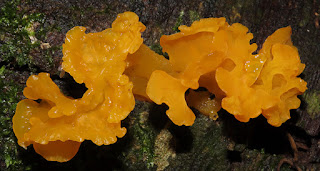 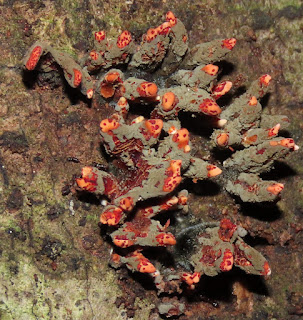 Related to stinkhorns, this odd mushroom might be in the genus Laternea, possibly also Clathrus. 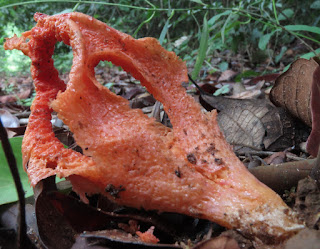 Most people wouldn’t look at these tiny bird-nest like structures and think of mushrooms, but that’s what this Cyathus sp. is.  A related species grows in my Eugene yard. 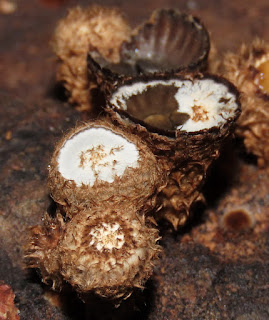 We saw lots of typical looking wood-ears, but this was the first time I’ve seen Auricularia nigricans, distinctive with its fuzzy dorsal side. 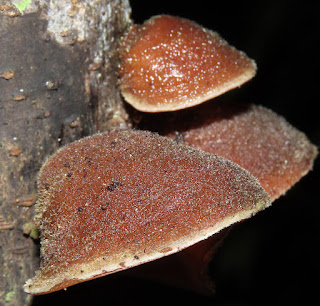 This fascinating mushroom is Myrmecopterula moniliformis, placed in a new genus described only last year, and is associated with leafcutter ants. It may be a parasite on the species of fungi that the ants cultivate, or it might just be the decomposer of old ant fungus farms after the colony has died, but it’s not really known. 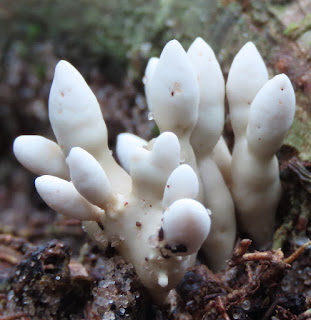 There were some so bizarre, like these two, I have no idea what they are – nothing similar can be found in the Field Museum field guide pdfs I have. 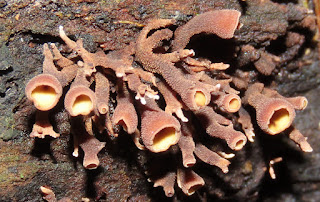 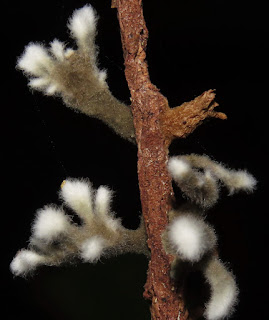 There are some truly beautiful mushrooms, like almost anything in the genus Marasmius and their close relatives, which turn out to be a largely early-season group that is the first to start decaying the leaf litter that has accumulated over the dry season. 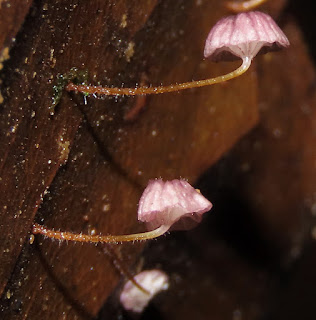 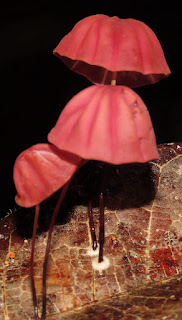 One of my favorites is Marasmius amazonicus, a spectacular and gigantic member of the genus, and not an abundant one; this was the only one we saw. 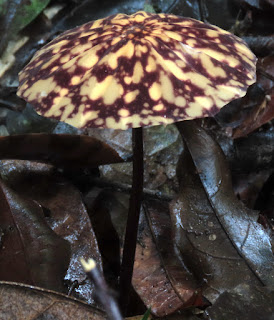 Let’s not forget the entomopathogenic mushrooms that more and more people are hearing about. There are still many undescribed species in the Neotropics, so it’s usually not possible to say what species you have with confidence. This first is probably in the genus Nigelia, having killed a gorgeous scarab. 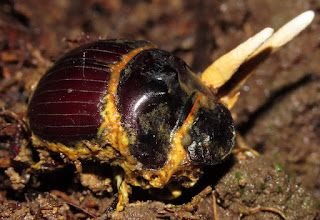 This is an Ophiocordyceps sp., its host an ant. 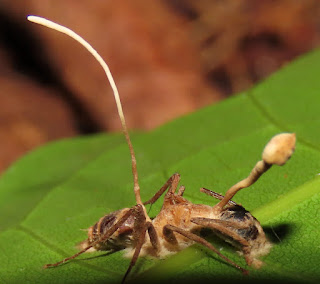 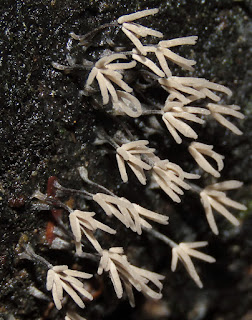 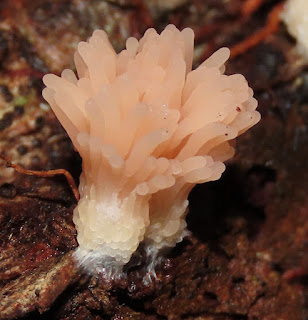 At the end of our tour, even though only slightly deeper into the rainy season, we finally started seeing some mushrooms that one encounters more frequently later in the season. This exciting find was the only Hygrocybe we saw. 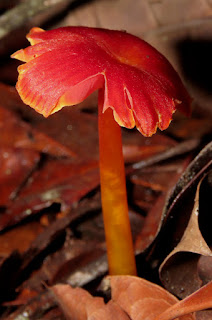 Posted by Birdernaturalist at 5:36 PM