Try Not To Step on the Baby Lizards 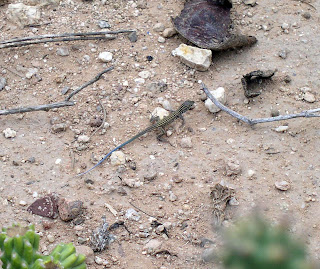 The yard at 3919 N. Vine is alive with life right now, and baby lizards are among the most prominent. In some places, one must walk slowly to avoid stepping on them as they scatter. The most abundant actually seems to be the Tiger Whiptails. My point-and-shoot has only a 3x zoom, and I didn't crop this photo all the way so you can see how small this guy is.

This one is a baby Ornate Tree Lizard, even smaller than the whiptail, with a total length of about 1.25 inches. I used the super-macro on this one. 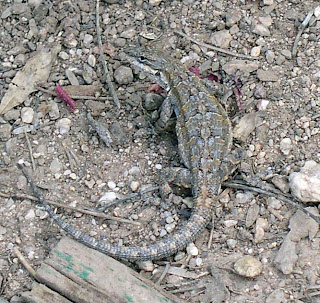 This adult female was nearby, perhaps the mother. There are also baby Desert Spiny-Lizards and Mediterranean Geckos about. 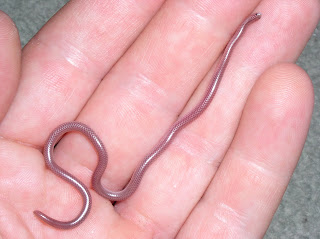 I should have posted this next photo when I took it on August 10, but I was in the midst of packing for Brazil. It's a Western Threadsnake, formerly called Blind Snake. I discovered it in the back yard as I was going out late to take the laundry off the line so I could finish packing. A minute baby gecko caught my eye, then the glimmer from this snake. It musked me nicely and squirmed nonstop. It took me 15 mintues to get one still photo. 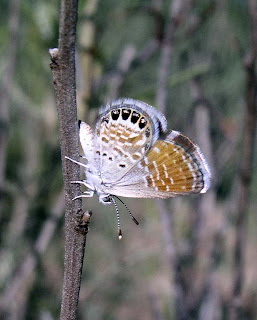 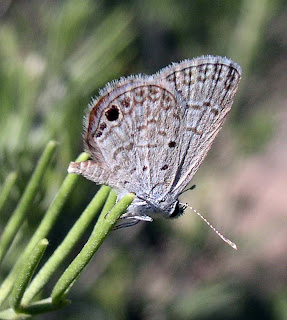 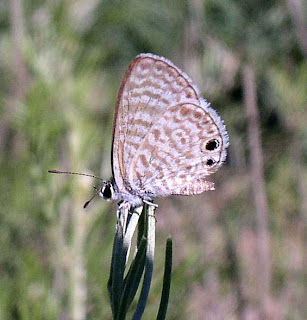 Other stuff in the yard: Butterflies. At least 15 species, though I spent a total of only 20 minutes in the yard looking. Interesting were territorial individuals of three species of blues on an Australian acacia species. At one time, the three of them were buzzing around each other, vying for the best perch. These are Western Pygmy-Blue, Ceraunus Blue, and Marine Blue, in that order. 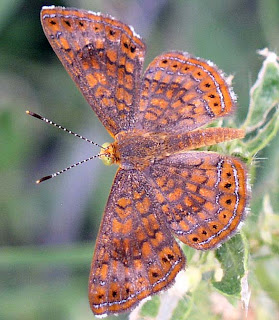 This is one of at least three territorial Fatal Metalmarks. 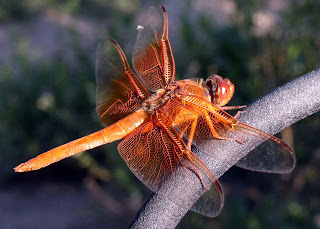 Not too many dragonflies call the yard home, but this Flame Skimmer used the hummingbird feeder stand as a perch to catch the many insects pollinating my Whitebush, Aloyisa gratissima. 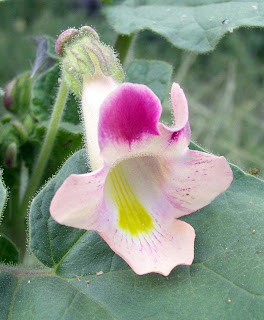 And finally, there are some nice plants that have responded to the 8 or so inches of rain we've had in 2 months. This native is a Doubleclaw, Proboscidea parviflora, also known as devil's claw. It's in the Sesame family.

And yes, there are birds. There is a very dominant immature male Rufous Hummingbird who OWNS the two feeders visible from my bedroom/office window. We have 10 feeders in the yard, so the Anna's, Costa's, Black-chins and Broad-bills have plenty of food. It's nice to have five species in the yard. Migrant MacGillivray's and Yellow Warblers are in the yard today, and Purple Martins are flying over every evening.
Posted by Birdernaturalist at 5:19 PM