Book Review: Birding for Everyone – Encouraging People of Color to Become Birdwatchers 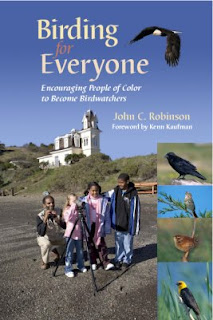 Birding for Everyone: Encouraging People of Color to Become Birdwatchers. By John C. Robinson. 2008. Wings-on-Disk, Marysville, Ohio. Order from On My Mountain.

The typical review that I’m used to writing essentially assesses whether the book (or CD, in one recent example) is up to snuff as an ornithological reference. In doing so, I rely upon my own knowledge and experience with the birds of the region, as well as comparisons to similar works. This book doesn’t fit the mold of my usual review subjects, and I can’t really say that it allows comparison with similar literature. First of all, it’s more or less a social commentary, not a birding reference. And as far as comparing it to other similar works, no book on this topic has ever been published (though I do remember a brief look into the issue in the Birding magazine a few years ago). I think this is the book’s primary strong point and one that makes it worth reviewing.

In my reviews I also occasionally comment on the language, writing style, and organization of information, mostly simply based on my impression of how well I’ve managed to understand what is being communicated and how well I’ve followed the author’s point of each section. Not being a professor of English or a literary genius, my opinion bears little weight. But I take requests of writing reviews seriously and don’t hesitate to give my opinion here.

I will stick to this format for my writing this review, even though the nature of the topic seems to rather elicit my opinion on the lack of minorities in birding, what the causes of this are, and what should be done about it, if anything. I do indeed have some thoughts on these, but they are hardly with the authority of a sociologist.

Taken directly from the introduction, “The purpose of Birding for Everyone is to explore the lack of minorities among birdwatcher, reasons for the relative absence of minorities among birders, and effective solutions as part of outreach and recruitment programs.” The book strays from this purpose in a very haphazard way, and it seems to do so only in order to make for a text large enough to be called a book. Several chapters seems irrelevant and written with different audiences in mind. They serve only to distract and muddle the importance of the topic at hand. But overall it is written clearly and I never had trouble understanding what was being communicated.

Any book needs an introduction, and I think the autobiographical nature of the first chapter, titled “The Making of a Birdwatcher” serves well. The author is African American, so his personal tale of how he came to be a birder is not only pertinent as a case study, it’s also a fun, inspiring read, and most birders will be able to relate. Also autobiographical in nature, but out of order and much less pertinent (more of a distraction) are chapters 3 and 4 (“Guess Who’s Coming To Bird” and “Why Study Birds?”). The first illustrates the author’s skill as an ear-birder (to establish a sense of membership with a birding audience?), as well as point out how his being a black birder came as a surprise to others. The second is an anecdote about an emotional connection the author experienced with birding and his wife. I found it to be little more than an embarrassing confession that establishes the author’s heterosexuality, but did I need to know that, and what does that have to do with the issue of minorities in birding? Let’s move on.

Chapters 2 (“How Do I Become a Birder”), 5 (“How to Identify a Bird: Ten Secrets to Becoming a Better Birder”), and 6 (“Birding and the Internet”) are perhaps even more tangent to the purpose of the book. The intended audience here seems to switch back and forth as well. Is it for the budding beginner? For the experienced birder? For the policy expert? For the potential mentor or educator? It’s hard to tell. Maybe this material would have been appropriate as a supplement or as an appendix intended as a resource for educators or counselors not involved in birding whose goal is to get kids interested. More appropriately placed are Appendices B and C (“Birding Festivals” and “Birding Tours”) which could have been lumped with these chapters in such a supplementary section.

Finally, only starting with Chapter 7, “The Hard Facts,” followed by Chapter 8, “Expanding the Research” and Chapter 9, “The Interviews,” do we get to the topic at hand. This section could have easily started with Appendix A, the actual questionnaire used to determine the level of birding participation by African Americans. It is clearly shown that African Americans and other ethnic minorities in the United States do not participate in birding and nature study as much as the average American. In the interviews we get to hear how a few birders who belong to various ethnic minorities became birders. Why this issue is significant and what might be done about it is expressed in the final chapter, “The Challenge—Are You Up For It?” which also includes commentaries by Ted Eubanks and Paul Baicich. My recommendation is to read Chapter 1, then skip 2-6, plunging directly to Chapter 7.

There is a lot that can be pondered, discussed, and theorized about this issue. My contribution to the discussion would be to encourage one to not think of the lack of participation among minorities as a result of barriers, a theme throughout this section of the book. Rather, think of it as a lack of opportunity. The difference may seem merely semantic at first, but from a practical perspective, the difference is huge. If barriers are the reason, it sounds more like a problem, that something abstract must somehow physically be removed. This seems a daunting, almost impossible task. A lack opportunities, on the other hand, simply means they need to be created.

Another way of looking at the entire issue, in order to explore causes and possible solutions is to compare birding participation between other groups. To turn it somewhat on its head, look at participation levels only among white people, but compare them in the United States with those in England. You will find a much higher level of participation in England. Without the possibility of reaching out to racism and exclusion as reasons (which are indeed barriers to many things, and can’t be eliminated as a factor in the situation in America), one might more clearly see what sorts of opportunities are needed to increase participation in birding in any group or region.

I hope this book reaches a wide audience and that people take the issue seriously. Getting more people interested in birding, nature study, and the environment can only be a good thing.

Posted by Birdernaturalist at 8:59 AM