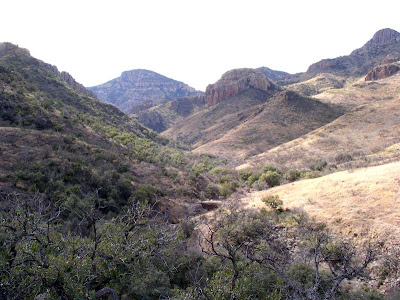 In the interest of continuing my education into the remote areas in the Atascosa Highlands Christmas Bird Count circle, I planned a hike down Ramanote Canyon with my friends Laurens Halsey and Jake Mohlmann. Getting to lower Ramanote is pretty straightforward – just drive to the end of Camino Ramanote in the town of Rio Rico, just off of I-19. But it's the dense oak-pinyon-juniper woodland at the heads of the canyons that holds the most promise for adding interesting species to the CBC. Unfortunately, there is but one official trail in the entire mountain range, and it leads only to Atascosa Lookout, skirting across the top of Bellota Canyon. So Laurens, Jake and I planned a cross-country hike into uppermost Ramanote from that trail, then, by leaving one car at the end of Camino Ramanote, we could make a one-way hike. To make a long story short, we found a route that involved very little bushwhacking, an easy descent, and great access to the very nice woodland that drapes the north-facing slopes of the canyon. Much of the hike was made easier by trails created by the abundant illegal border traffic (mostly immigrants). Further evidence of their presence was apparent in the usual form of trash — clothing and food containers in various stages of decay. Our route took 6.66 miles.

This Rough Stink Bug (Brochymena sp.) was under a rock. 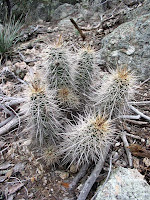 A beautiful, healthy hedgehog cactus, possibly the Claret Cup (Echinocactus triglochidiatus), with red flowers in April-May that are pollinated by hummingbirds. 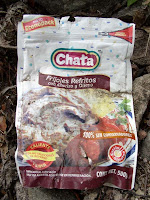 Evidence of illegal border traffic was common. I thought this one was a good example of how Spanish and Portuguese can differ. "Chata" is just the brand name for this packet of refried beans (with sausage and cheese), but in Brazil, chata means something like "stupid jerk." 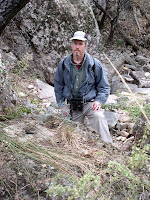 One of the most amazing encounters was with a trio of Montezuma Quail that Laurens spotted only after Jake and I had walked by one within arm's length. It was crouched motionless on a boulder just above the streambed, not quite as invisible as when they are on the gound among grass clumps. Click on the photo for a larger image. 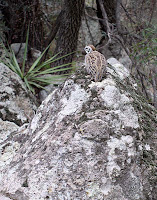 After spending several minutes photographing the first bird, we looked around and discovered two more right next to us, including this male. Other good birds on the hike were Townsend's and Black-throated Gray Warblers, Painted Redstart, Hepatic Tanager, and Blue-gray Gnatcatcher. 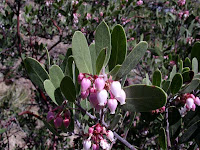 One of the more surprising discoveries was the presence of many Anna's Hummingbirds throughout the canyon. During the CBC there were no hummingbirds recorded, so it was clear they had since arrived, taking advantage of the blooming Point-leaved Manzanita (Arctostaphylos pungens) throughout the hillsides. 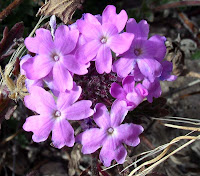 Southwestern Mock Vervain (Glandularia gooddingii) was also blooming here and there but probably didn't offer much in the way of nectar. 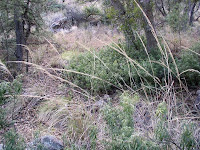 It was exciting to discover the presence of both Small Ballmoss (Tillandsia recurvata), the only bromeliad in Arizona, and Mexican Orange (Choisya dumosa var. mollis), here in the understory in a small part of the canyon. This particular variety of Mexican Orange is endemic to these mountains. Some were 5 1/2 feet tall.

This was a particularly beautiful stretch of the canyon, where both of these rare plants were, as well as an Elegant Trogon. 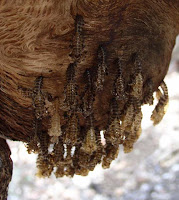 These exuviae (molted skins) are from the Pleasing Fungus Beetle (Gibbifer californica), left where the larvae emerged as adults. They were on the underside of an oak branch that had fallen across the dry, rocky bed of a side ravine.

There were a few butterflies, such as this Sara Orangetip.

And this Painted Lady. 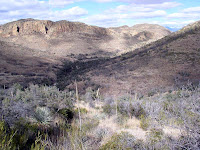 This is looking down canyon near the end of our hike.
Posted by Birdernaturalist at 9:36 PM