Saguaros, Cicadas, and Tenebs in the Sonoran Desert 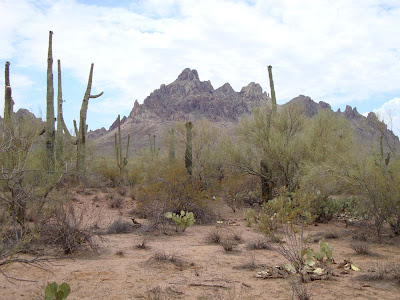 It's the hottest, driest time of year in the Sonoran Desert, but it has its appeal. This past Thursday, June 2, I joined my friends Beth and Linda exploring in the Ironwood Forest National Monument NW of Tucson. We lucked out that overcast skies kept the temperature below 90°F until quite late in the morning. 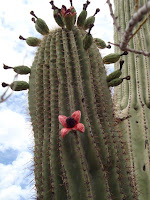 One of the main attractions this time of year is the ripe Saguaro fruit. This giant cactus, the state flower of Arizona, blooms from late April-early June, and this time of year the fruits ripen, split open, and offer wildlife a sweet smorgasbord. White-winged Doves get it while it's still moist on the plant. 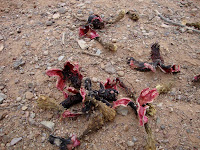 Ants, beetles, rodents and other animals scavenge it on the ground. But there is so much of it, not all of it is consumed right away.

This is what is known as a "teneb" among beetle people, a member of the family Tenebrionidae, the darkling beetles. This one belongs to the genus Argoporis, of which there are about 8 species.

This tiny teneb (a few mm long) may be a scavenger of harvester ant waste, but as of yet remains unidentified even to genus. 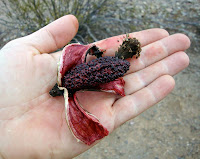 The pulp in the center often dries as a solid mass, and when it is nearly fully dry, it is sweet as candy. It has a similar flavor to dried figs but is even more scrumptious. 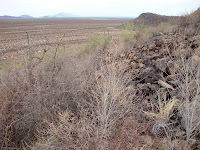 I hiked to the top of a hill of black, volcanic rock just to see what was about. Keep in mind this area is baked by the direct sun many days of the year and probably receives an average of less than 10 inches of rain a year. 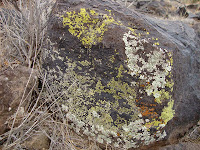 The north side of this rock had several lovely crustose lichens. 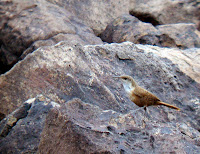 On the way up, I must have come close to this Canyon Wren's nest. 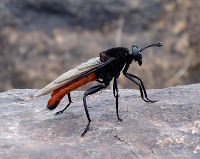 Patrolling territories on top of the hill were a few of these gorgeous flies, about an inch and a half long. I first thought they were robber flies, in the family Asilidae. But a quick check of the Kaufman Field Guide to Insects of North America quickly led me to the family Mydidae, the Mydas Flies. And then checking Bugguide.net, I was able to compare to my friend Philip Kline's photos of what has been identified as Mydas ventralis. When another individual flew by, the one on territory would employ it in an aggressive chase, then come back a minute or two later and perch on the same rock or one nearby. 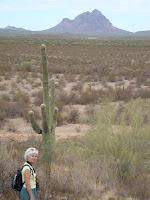 Linda Nelson with Ragged Top in the distance. 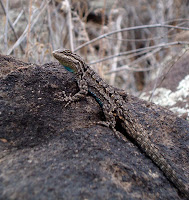 On the way back down the hill, Linda and I watched this Ornate Tree Lizard. Notice the blue belly and turquoise and yellow throat. 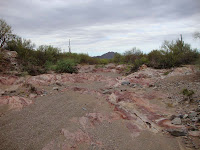 One of the desert washes that fills up with a violent flood during the monsoon rains, due to arrive any day.

It was so dry, not many insects were around. This is a Cream Grasshopper, Cibolacris parviceps. 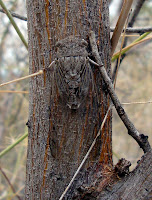 But even in the driest, hottest areas, cicadas are noticeable from their loud buzzing. In one of the washes, we heard two species. One gave a repeated "bzt-bzt-bzt..." a little faster than 4 notes per second. I tracked a couple down and got photos to determine they were Diceroprocta arizona. Notice the very long wings and the muted colors and patterns on the body.

The other had a higher pitched, constant buzz, "czczczcz..." It was the same one I hear in my neighborhood in Tucson, Diceroprocta apache. Notice on this one the darker background color, orange highlights, and pale wing edges.
Posted by Birdernaturalist at 8:26 PM