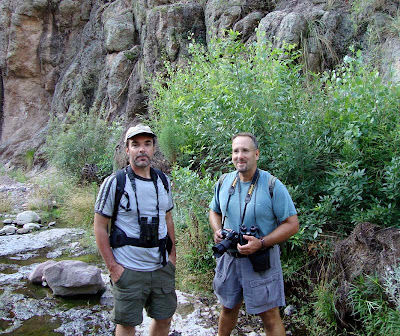 This past Monday I joined my friends Steve Nord and Michael Skinner for a hike down one of my favorite places in Arizona – Sycamore Canyon. Steve lives in Oregon and was down for a week of birding with Michael all over Southeast Arizona. So when they invited me to join them for a day, it was coincidence that I suggested a place that neither of them had been to before. That they both still needed Five-striped Sparrow was another bonus.

We left Tucson at 4:30, fully equipped with hiking snacks, lunch, and lots of water.

Arriving at the parking area and trail head at 6:30, we wanted to get started hiking right away. But a moth collector from Colorado and his 14-year-old son had set up a mercury vapor lamp in front of a white sheet last night, and it was still covered with moths. These are a pair of mating Montana Small Silkmoths, Sphingicampa montana (now sometimes placed in the genus Sissphynx).


The larger moths are always easier to identify. This giant is a Five-spotted Hawkmoth, Manduca quinquemaculata, a sister species to the tobacco hornworm. 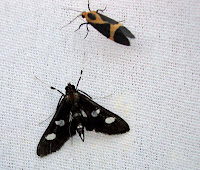 But even some of the small moths can be interesting. The larger is a Grape Leaf Folder, Desmia sp. and the black and orange one a Thin-banded Lichen Moth, Cisthene tenuifascia.

Not only moths are attracted to night lights. This is an adult (harmless, obviously) of the giant antlion, Vella fallax texana. The larvae of this species doesn't make the typical sand funnels, made only by those in the genus Myrmeleon. 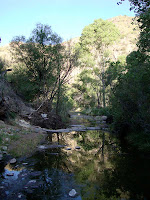 The scenery here is gorgeous. And being one of the few watersheds in Arizona that flows southward into Mexico (rather than westward into the Colorado River), it is a conduit for many tropical species of plants, birds, and bugs found nowhere else in the United States. 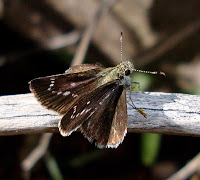 Early on during the hike we were distracted by dozens of these tiny Elissa Roadside-Skippers, Ambyscirtes elissa, normally quite scarce. This is a good year for them.


Mixed in with them were a few other species, such as this Bronze Roadside-Skipper, Amblyscirtes aenus. The flower is Lemon Beebalm, Monarda citriodora ssp. austromontana.


And this is a Large Roadside-Skipper, Amblyscirtes exoteria. It is getting nectar from Arizona Milkweed, Asclepias angustifolia.


On a fruit of this same milkweed were nymphs of the widespread Large Milkweed Bug, Oncopeltus fasciatus.


This is an adult.


Michael spotted this amazing critter while we were scrambling up a steep, rocky slope to avoid the deep water hole at 1.5 miles. If you don't see it here, try clicking on the image for a larger version.

Or try this. It is Leuronotina ritensis, informally known as Santa Rita Lichen Grasshopper. I only learned about the existence of this species this past March while visiting with my friend Bob Behrstock, a grasshopper expert. And he had only recently learned of it and seen it a few miles from here on Ruby Road. And it was discovered in this mountain range only last August by Doug Taron, which you can read about in his nice blog here.

This is the only other grasshopper I noticed today, Brown Winter Grasshopper, Amblytropidia mysteca. 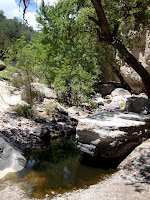 There is permanent water in this drainage, but during very dry periods such as this, it is restricted to isolated holes. At other times of year there is a flowing stream for much of length of the approximately 6 miles of this canyon in Arizona. I think only after severe flooding events does it ever makes it all the way to the Gulf of Mexico via the Río Concepción.

There is a fish endemic to the upper reaches of this watershed, found only here and in nearby Sonora, the Sonora Chub, Gila ditaenia. Every pool was stuffed with them. Any day now, the monsoonal rains will hit this area, connecting the pools and creating breeding habitat up and down the canyon. 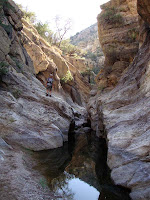 It will also make the hiking more difficult. As it was, we had it easy, walking down the middle of the dry wash most of the way. This was the most difficult spot to navigate, looking back up the canyon at Steve having just made it past the tight spot.


The water is what makes this canyon so amazing for plants and animals. This is a Sonoran Mud Turtle, Kinosternon sonoriense, poking his snout up to get a breath of air and revealing the distinctive, fleshy barbules on his chin.

I was especially excited to discover this pair of Tezpi Dancers, Argia tezpi, a rather rare and localized damselfly notable for having no blue.


This Apache Dancer, Argia munda, has the more typical coloration of damselflies. The female is depositing eggs in the rotting vegetation. They have already mated, and the male holds on to keep other males from grabbing the female, scooping out his sperm and fertilizing her eggs with his own.


This is Amethyst Dancer, Argia pallens, a rather unusually colored damselfly.

Most damselflies can be recognized from dragonflies from their closed wings, but that doesn't apply to the spreadwing damsels, of which this is a member. It is a Great Spreadwing, Archilestes grandis. But it still has the very slender, delicate body and tiny head with widely spaced, beady eyes that will give away almost any damsel.

This is a dragonfly, a female Plateau Dragonlet, Erythrodiplax basifusca. Dragonflies don't all perch so cooperatively, and we may have passed this off as a Spot-winged Meadowhawk if it hadn't been for much more distinctive male nearby – and the wonderful new book by Dennis Paulson, Dragonflies and Damselflies of the West.

Arizona Mottled-Skippers, Codatractus arizonensis, were unusually abundant throughout the canyon. 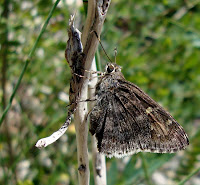 We also encountered quite a few Acacia Skippers, Cogia hippalus. The most exciting butterfly of the day was a Blackened Bluewing, Myscelia cynanthe, just below the junction with Peñasco Canyon. I didn't even come close to getting a photo, but it flew right past my face and is a very distinctive butterfly with deep purple rays above. There are only 5 or 6 records of this Mexican vagrant in the United States. Amazingly, this is very close to where I found one on January 24, 1997, the very butterfly that got me started in identifying them with field guides.

Much less spectacular, but still quite pretty and very well camouflaged was this widespread Indomitable Melipotis Moth, Melipotis indomita. 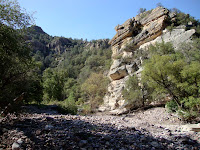 One of the interesting characteristics of Sycamore Canyon is the strange mix of habitats usually segregated by elevation. Because of the torturous shape of the drainage, steep slopes, and general southward-flowing direction there are some very hot, exposed slopes that receive only light frosts, as well as protected coves where cold air pools, creating a more temperate habitat. So here at 3700 feet elevation you see groves of Mexican Pinyon, hosting Spotted Owl, Northern Pygmy-Owl (of which we saw a family of 4), and Hepatic Tanager across the way from subtropical desertscrub with Saguaro, Goodding's Ash, and Kidneywood, home to things like Five-striped Sparrow and Varied Bunting.

One could botanize for weeks here and still not see every plant. This is Mexican Skullcap, Scutellaria potosina ssp. potosina var. tessellata. About 700 species of plants are found in this area, counting lichens and mosses.


Growing right out of the rock wall was this boneset or mistflower, formerly in the genus Eupatorium. It is now known as Lavender Thoroughwort, Fleischmannia pycnocephala. 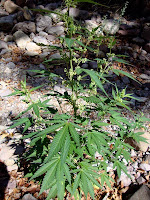 We were somewhat surprised to find this Wild Hemp, Cannabis sativa, growing in the middle of the wash. It didn't quite look like cultivated marijuana, so I wouldn't get your hopes up. 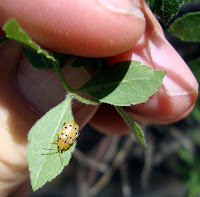 A robber fly in the family Asilidae, possibly in the genus Nemochtherus. 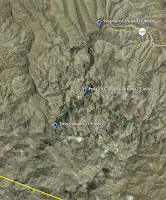 We hiked a total of 4.1 miles down the canyon until we got to the area where Five-striped Sparrows occur, the area around Twin Canyons. It took us 4.5 hours to get here, arriving at about 11:00, having stopped a lot on the way to look at things. With a little iPod playing, we got a very handsome Five-stripe to come right out. We also pished and imitated owls, which brought in a rare Black-capped Gnatcatcher, Varied Buntings, and a seemingly endless quantity of Dusky-capped Flycatchers.

With good navigational skills, one could make a cross-country hike out one of the side canyons or straight up the slopes and have a car waiting either in California Gulch or on the Summit Motorway. But we simply doubled back and took 3.5 hours to get back to the trailhead. 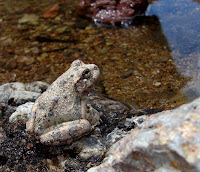 It was probably close to 100°F around 1:45 when we came across this Canyon Treefrog sitting in the open sun. It must be one of the most heat- and drought-tolerant frogs in the world.

Just a few hundred yards from the car, a thunderhead began dumping rain on us. What had been distant lighting struck just a hundred yards or less ahead, the instantaneous and earsplitting thunder eliciting the unexpected reflex of a gut-level yell from me. It was hilarious for a moment until we realized we were smelling the smoke from the struck tree just up the slope from us. And then the rain started really coming down, and we ran the rest of the way to the car. What an exhilarating end to a great day.
Posted by Birdernaturalist at 7:11 PM