March 16, 2010
This was Giant Wren Day. By driving just a few kilometers eastward from Arriaga, one enters the rather limited range of this great bird. We didn't have to wait long, birding along a rural side road leading past fields and mango orchards before we found them.

The birding here was really fun, with all manner of open country birds and migrants. First thing in the morning a few hundred Western Kingbirds flew over. We also came across Dickcissels and Blue Grosbeaks feeding in a field.

Another one of our target birds here was the subspecies of Nutting's Flycatcher Myiarchus nuttingi flavidior, which occurs from here southward to Costa Rica. In general, it is very similar to the subspecies M. n. inquietus, which occurs north of here. But while the taxon is based on measurements and colors taken from museum specimens, it turns out they differ quite radically in voice and habitat – and they occur very close to each other in apparent parapatry. That would make them separate species.

Here is one shot I got of the flavidior Nutting's Flycatcher. Steve also got some additional recordings of the calls. 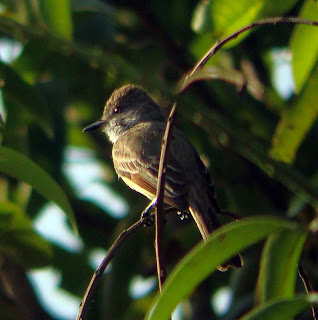 We spent much of the rest of the morning birding the nearby coast and waterways, such as here at Boca de Cielo. 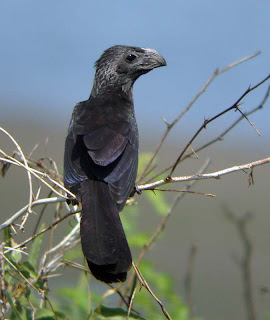 It was a fun day, and without trying too hard we managed about 115 species of birds.
Posted by Birdernaturalist at 1:36 PM