On Vacation with the Mays

This past week I've been hosting friends visiting from Germany. It's all been at a very relaxed pace compared to my usual birding tour routine, but we packed in quite a lot, and I'm sure they're plenty exhausted by now, on to their next adventure.

The connection is Christiane who was one floor above me in the student dorms in Freiburg, Germany when I was an exchange student there in 1990-91. This photo from this morning after coloring Easter eggs. 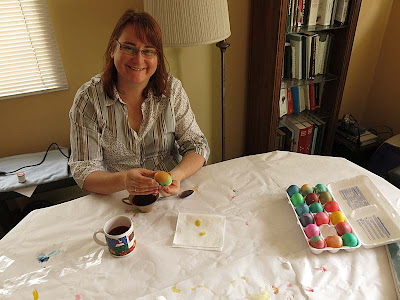 Since then, she married Matthias (they both had been exchange students themselves at University of Massachusetts in Amherst), had two kids, and they now travel during their vacations. These are Marvin (just graduated from high school) and Marcella. 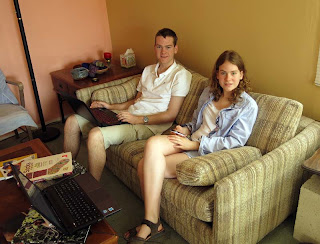 None of the family is a birder, but I couldn't help myself. I called in a Canyon Wren (Schluchtzaunkönig) on their first day here in Tucson Mountain Park. We later spent 4 1/2 hours at the Arizona-Sonora Desert Museum where they enjoyed the whole thing, including the raptor free-flight demonstration. 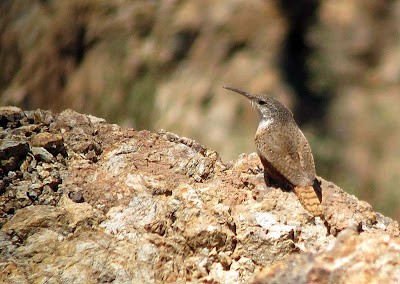 They had rented a 30-foot RV, so we were limited where we might go, but national parks and national monuments are on every German's wishlist, so we went to Chiricahua National Monument; they were just barely within the size limit for the campground at Bonita Canyon. I tented next to their RV. We did a nice 3.6-mile hike through the picturesque rock formations, and I showed them Painted Redstart (Rotbrust-Waldsänger), Hairy and Arizona Woodpeckers (Haarspecht and Arizonaspecht), and Yellow-eyed Junco (Rotrückenjunko), among others. The evening after we got into our campsite we saw Whiskered Screech-Owl (Fleckeneule). 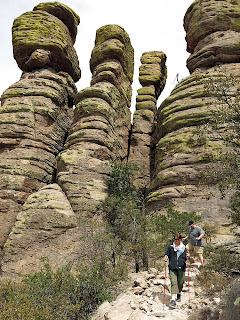 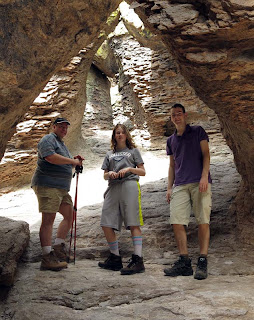 We also saw lots of Yarrow's Spiny-Lizards and Marcella spotted this group of White-nosed Coatis (Weißrüssel-Nasenbären) outside the RV window on the way up the road. Lucky Germans! 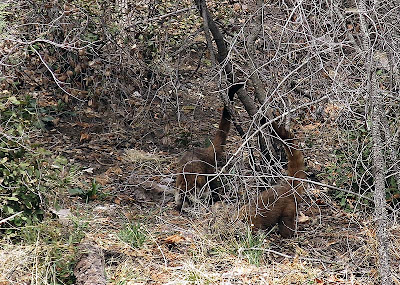 But these late sleepers weren't lucky enough to witness the covey of Montezuma Quail that strolled through the campground right past my tent at 7:00 a.m. 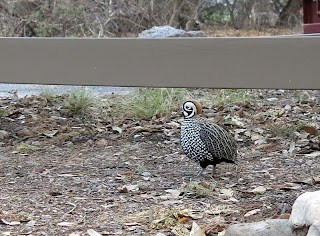 I used my imitation of the female whistle to get them to come in closer and got some video with my Canon Powershot G15 – here a link to the Youtube upload.

For our second night of camping we made it to the White Rock campground near Peña Blanca Lake, where I showed them Elf Owl (Elfenkauz). The next morning they were thrilled to see Northern Cardinal (Rotkardinal) and Vermilion Flycatcher (Rubintyrann) before we did something rather touristy (but very worthwhile): the Tumacacori Mission National Historic Park. 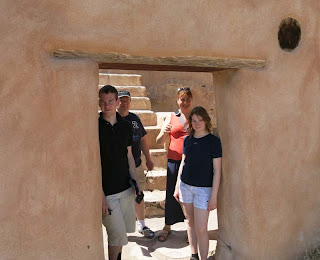 The fun is now over, I have to get back to work on upcoming travel and future tour plans.
Posted by Birdernaturalist at 5:55 PM