Hopping Over to Bosque For a Rail

This past Sunday, Matt Daw, a birder from North Carolina was taking this video of a Least Bittern at Bosque del Apache National Wildlife Refuge when a surprise walked into view behind the bittern. Surprise is putting it mildly, and I'm almost certain that the video clip was edited to end just before a stream of expletives uncontrollably let loose. It is the first record of Rufous-necked Wood-Rail for North America, not a species anyone predicted would be found here.

See an interview with Matt here.

Since such an out-of-range occurrence for this species is without precedent, some people are suspicious about the origin of this bird. The debate centers around the plausibility of the bird's either being an escaped or released bird that was brought here from its tropical home or its ability to travel this distance on its own. The New Mexico Bird Records Committee will have their work cut out for them when they decide on whether to accept it or not.

In the meantime, anyone banking on acceptance is rushing to Bosque del Apache, including me. Yesterday I rode over with my birding friends, retired doctors Peter Salomon and John Mueller, as well as my friend Celina. I did this very drive with Peter and John (and our friend Gene Loring) over 12 years ago when we went to the Sandia Crest to see the rosy-finch spectacle. This time we stopped long enough for me to get a shot of this famous (to birders) sign, just north of Deming. Whether or not the bird reference was intended by the highway department isn't known, but the only species in the immediate area were House Sparrows and Eurasian Collared-Doves (not too far down the road were Chihuahuan Ravens and Swainson's Hawks). 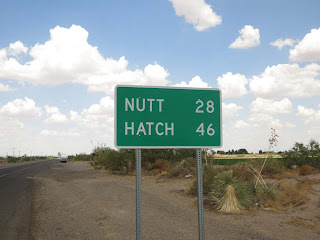 We arrived at the refuge almost exactly 5 hours later, 370 miles from our meeting point in NE Tucson. Using the good directions provided by the NM RBA service compiled by Matt Baumann, we arrived at the spot and waited and watched. Suddenly it was there, walking just within the edge of the cattails at first, then finally venturing out into the open to catch critters in the shallow mud. 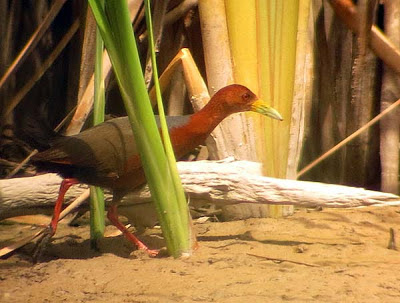 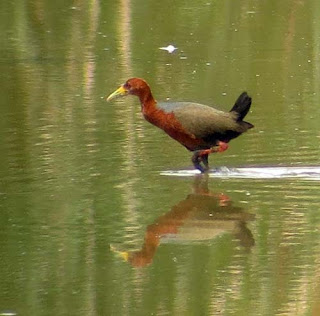 We watched it for about 15 minutes before it vanished into the cattails. Elated over our success, we babbled all the way back to Tucson, Celina and I knitting in the back seat.
Posted by Birdernaturalist at 10:51 AM