Cooking in Gambell Alaska – Where You CAN see Russia 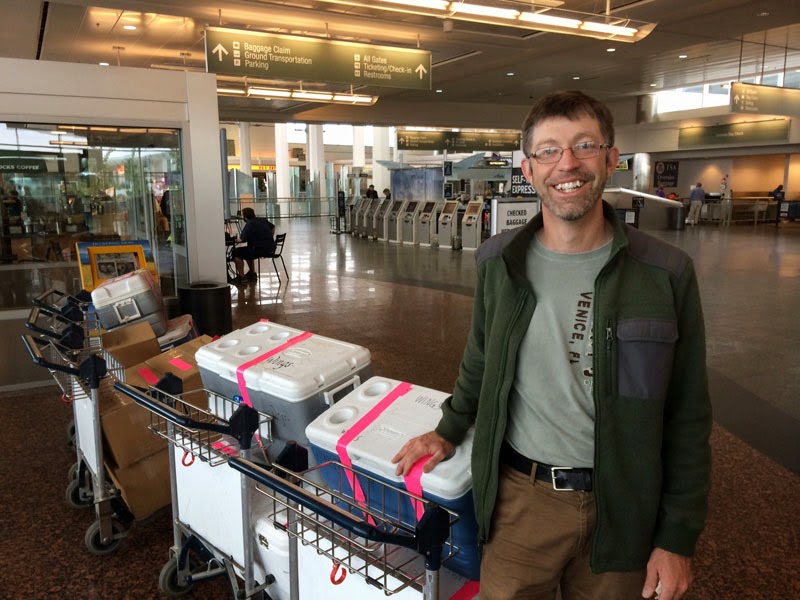 Here’s a mishmash of photos documenting my week –plus in Alaska from May 29 to June 9 this year, some from my good friends Will and Beth Russell. For example, the one above was taken by Will as we staged our 9 coolers, 10 boxes of food, and 2 totes with 30 dozen eggs at the Anchorage airport, ready for check-in to our flight to Nome. Each of the 15 participants of the WINGS tour group to Gambell claimed a cooler or box or two as part of their checked luggage.

Even before we had taken off from the Anchorage airport, we had a natural history moment. In the cabin of our Boeing 737, as we were being pushed away from the gate, a large moth was bouncing against the ceiling, working its way back from the front            . Passengers were commenting, some of them clearly uncomfortable. As it came closer to us, I quickly unbuckled my seat, stood up, and grabbed it. I’ve handed lots of sphinx moths and know you need a firm grip and can’t damage them very easily. I recognized the genus, as it was the same size and shape as our White-lined Sphinx, but I had to use my iPhone and Bugguide (my phone temporarily off of airplane mode) to find that this is the Galium Sphinx, Hyles gallii. We hadn’t started taxiing yet, so the attendants opened the back door of the jet a crack and let me release it. They then thanked me publicly over the loud speaker and everyone applauded.

When we arrived in Nome, it was clear something was amiss. Alaska Airlines had decided that eight of our nine coolers wouldn’t fit on the jet, despite their 400 pounds being only a tiny fraction of the weight of the passengers and other cargo. So we arrived in Gambell without the fresh Copper River salmon I had purchased the day before for dinner. Luckily, the one cooler that did arrive had something – our pork loin meant for day 5; and the boxes that did arrive had many of the vegetables, enough to piece something together for dinner. Here’s what we had tonight:

Another natural history moment came this same evening, while Beth was helping me prepare the salad by washing the organic lettuce I had bought in Anchorage. You should always wash your vegetables to get rid of dirt at the very least. But if they’re not organic, there’s always the possibility of trace herbicides and pesticides, and there’s no guarantee that a simple rinse will get rid it them all – some are even absorbed by the plant and can’t be washed off. But with organic produce, you may be surprised by the occasional insect, and this time, Beth discovered this live Mexican Tiger Moth, Notarctia proxima, nestled in the base of the leaves! I was amazed to have seen two lifer moths in one day in Alaska, and as far as I can remember, I had never seen any moth in Alaska. This one was obviously a hitchhiker from the source, and though I don’t remember reading where the lettuce came from (the natural food store in Anchorage actually labeled the source of all their produce), the range map of this moth indicates that the lettuce probably came from California.
http://mothphotographersgroup.msstate.edu/species.php?hodges=8181

The rest of my week at Gambell was mostly spent in the kitchen, on my feet, from 4:45 to at least 10:45 p.m. (one night until 2:00 a.m.). Our menu, modified from the original to accommodate for the lack of coolers until the afternoon of our second day there:

Here are the sticky buns for the last morning’s breakfast, perhaps the most decadent thing I made (though the Boston Cream Pie is a close second). Almost all other baked goods used much less butter, often only half the sugar called for, and whole wheat flour. Not these. Once a year is ok for this most delicious of poisons. 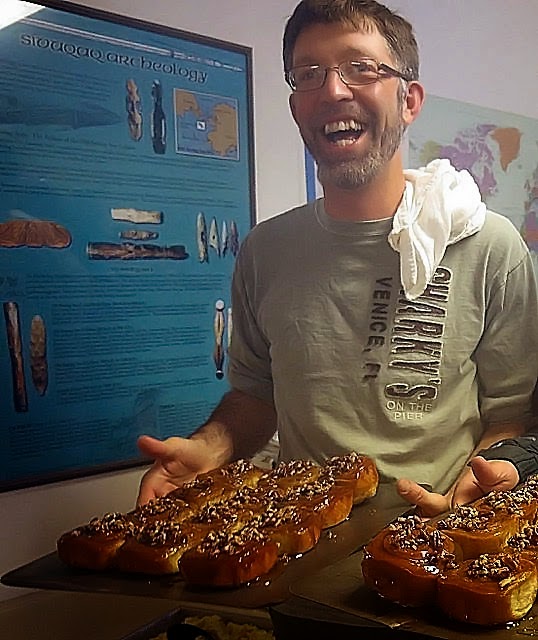 I did get outside a couple times. On our second day came word over the radios of a cuckoo a short walk from the lodge. I was ahead on lunch prep (and without the coolers yet didn’t have much to work with anyway), so I headed out. Before long the bird was spotted by Gavin and others, and I came to the assembly of all the birders, independents and other birding tour groups. 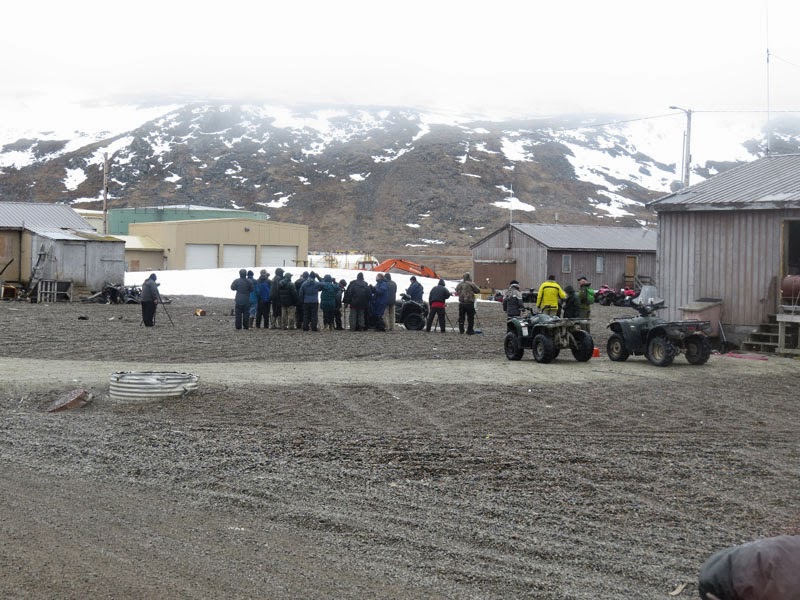 This female Common Cuckoo, probably a second-spring bird, was taking shelter from the strong SW winds in the middle of town. 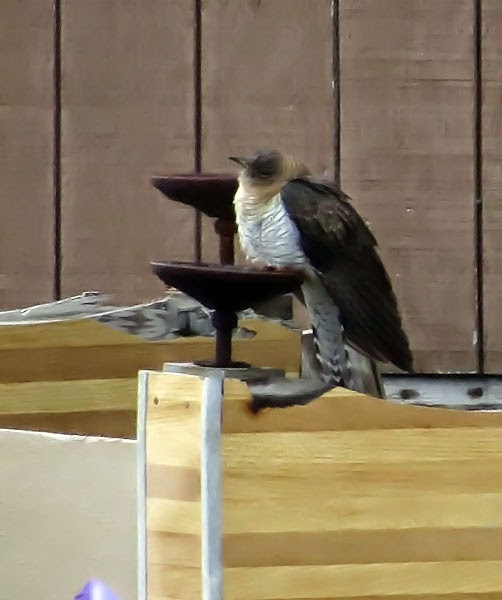 Late one night I also took a walk to the NW point to get my puffin fix. On the way was this Lapland Longspur. 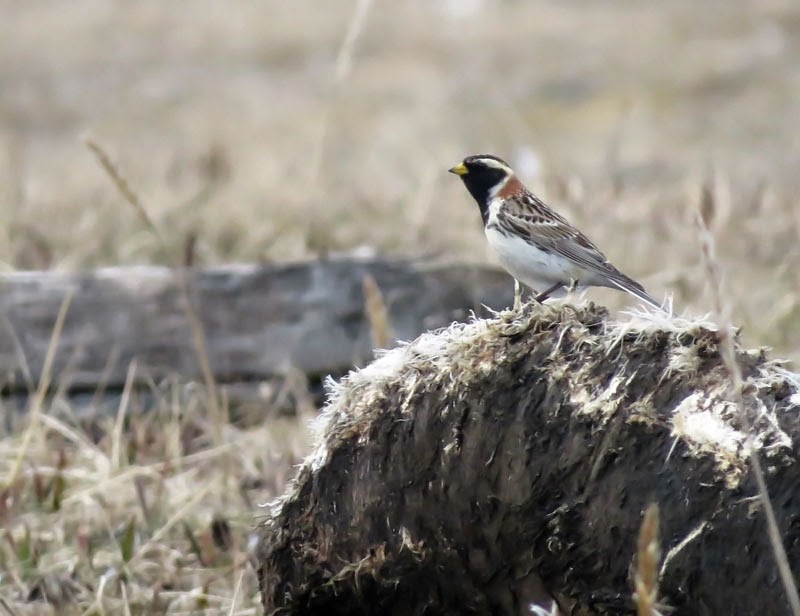 And near shore was at least one Horned Puffin, with many dozens flying past farther out, along with even more Tufted Puffins and numerous other alcids. 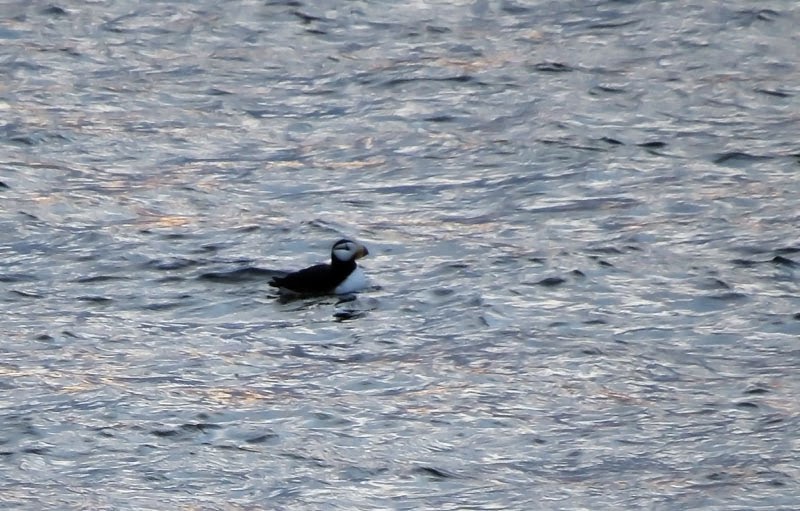 This is the view to the NW, and yes, you can see Russia from Alaska. But Sarah Palin didn’t actually know you could see it from here, nor would she even think of setting foot here, if she knows the place even exists; she was just being boastful in an exaggerated way, exposing her extreme ignorance of geography. 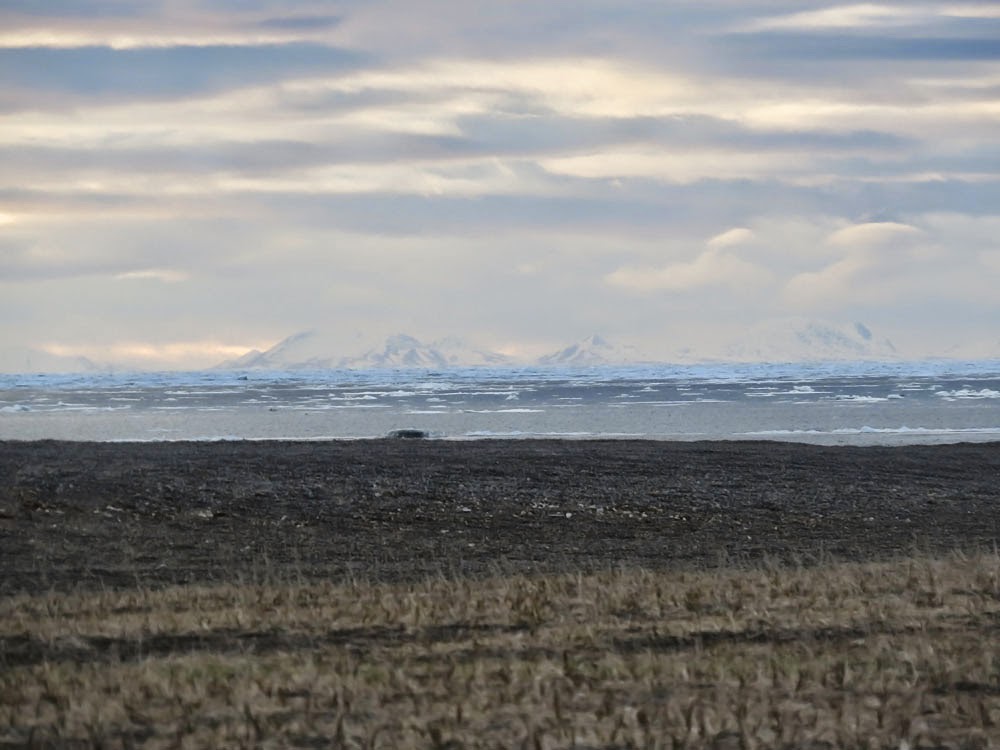 This is another view of the Chukchi Peninsula, just 36 miles away. Yes, it was cold (that’s ice on the Bering Sea, after all) but only about 34°F, and the north wind was light. Bundled up well, I was actually getting warm in this midnight sun.

On our last morning, however, over an inch of snow and very limited visibility seemed to doom our chances for an on-time departure, and I began to make mental plans for an emergency lunch. However, the plane arrived around 9:40, and we made our escape to Nome, thence Anchorage.

Back in Anchorage, it was practically tropical. This is Lake Hood, behind our first and last night’s hotel near the airport. 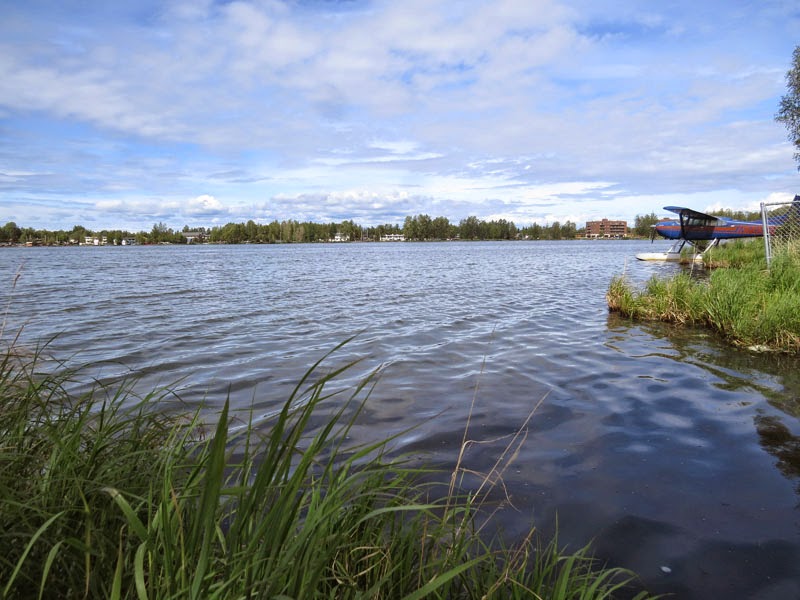 These Tule Bluets, Enallagma carunculatum, were abundant on the walls of the hotel and in the grass around the lake.

Later that afternoon, my friend Dave Sonneborn took me to Potter Marsh just east of the city. 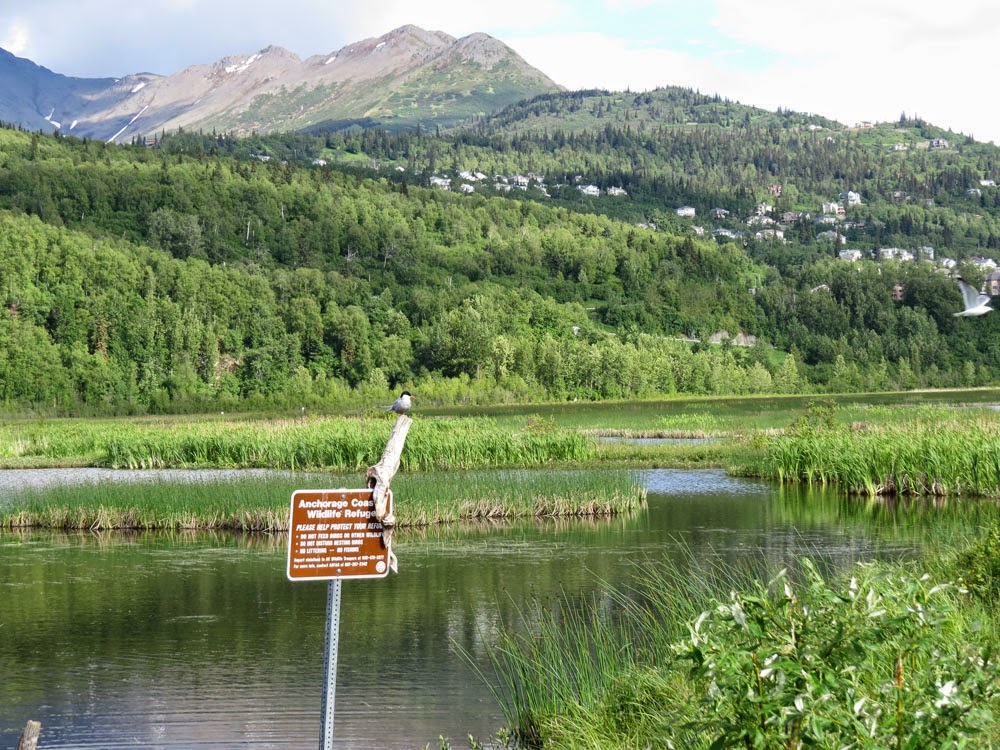 This Arctic Tern is by the main pullout on the highway and is probably the most photographed individual of its species in the world. 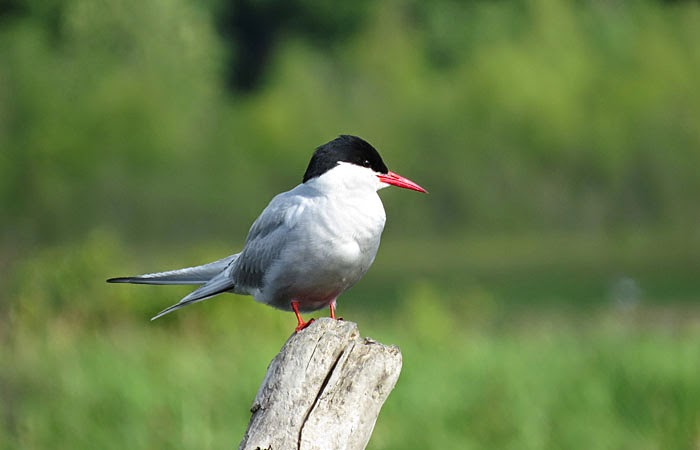 Dave pointed out this Common Muskrat at the same location.

I’m now recovering from my week in Alaska at my dad’s in Corvallis, Oregon. You’d think that the amount of time on my feet in Gambell would be tiring, but it wasn’t while I was there, or so I thought. But once I had a chance to sleep in – 10+ hours the first night – then the exhuastion flowed over me, and in one day I finally felt like I had just run a marathon. I can’t wait until next year!
Posted by Birdernaturalist at 10:29 PM