Out and About With the Naturalest Naturalist – Part 2

Now that I’m back from my week of cooking at Gambell, Alaska for the WINGS tour (more on that later), I can finish my posting of photos from late April in Arizona.

I left off at about noon on April 27 on my weekend with Jeremy Gatten in California Gulch. After our time on a rocky hilltop above the road, we continued down to the junction of Warsaw Canyon and California Gulch where there is a nice, large flat area perfect for camping in the shade of several large mesquites. From here we hiked up the gulch, hoping for some surface water where dragonflies and damselflies might be active.

Of course, we stopped to look at everything. Without a bright light and sheet for the night, we took advantage of roosting moths that we flushed during the day. This geometrid moth is Rindgea hypaethrata, which I recognized having seen the photo my friend Margarethe Brummermann had just posted to Bugguide. The larvae feed on the abundant Velvet Mesquite in the area, and the species seems to be found exclusively in Arizona in the US. The type specimen is from Tucson. 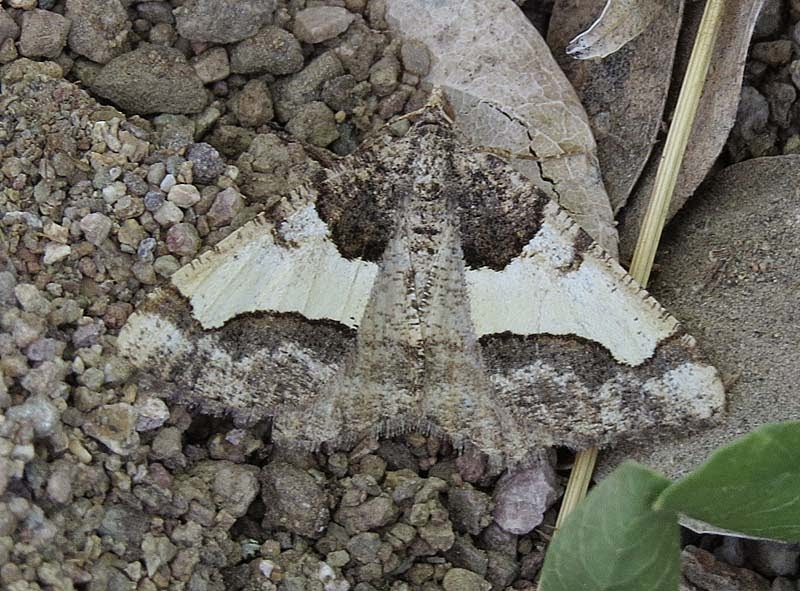 This is another geometrid moth, Eusarca galbanaria, seldom seen and also an Arizona specialty. Much less seems to be known about it, and it looks very similar to E. detractaria. I compared mine to the wingtips from Bruce Walsh's website (http://nitro.biosci.arizona.edu/zeeb/butterflies/figs/moths/Geometridae/Ennominae/6930vs31.jpg), doing a semitransparent overlay in Photoshop Elements, and the wingtip shape in proportion to the spot and transverse line match E. galbanaria much more closely. This is a new species for Bugguide. 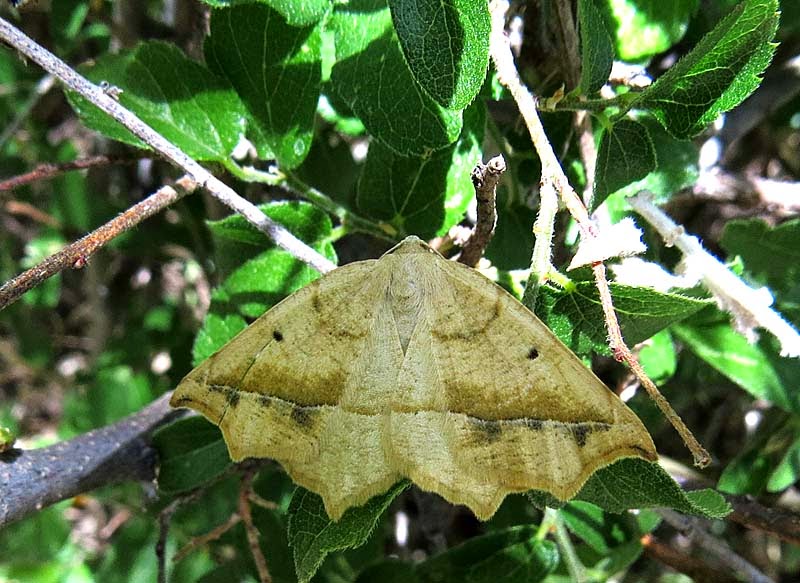 Sheep Skipper, Atrytonopsis edwardsi was the most common skipper in the canyon, with individuals patrolling territories from their favorite rock perches along the canyon sides. 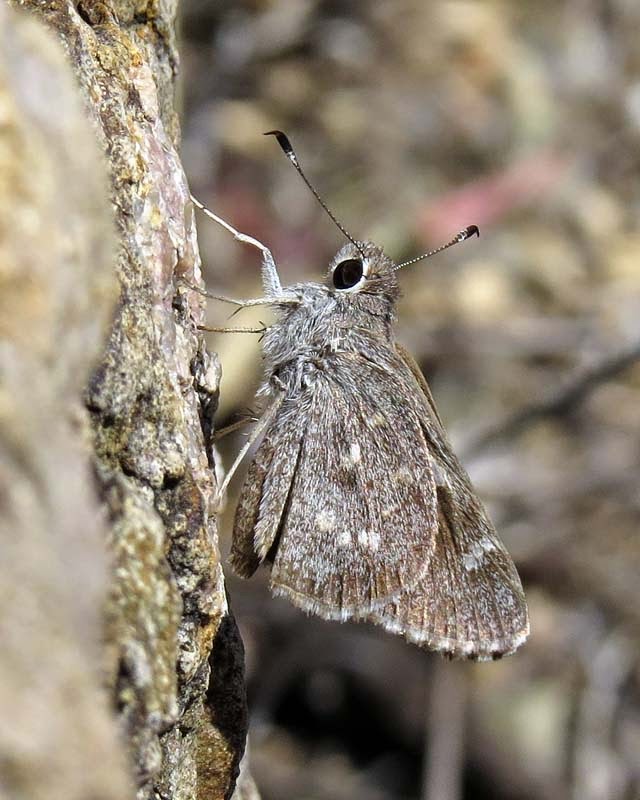 We saw both buckeye species, this one a Tropical Buckeye, Junonia evarete from the very dark underwing with a vague paler stripe through the middle. 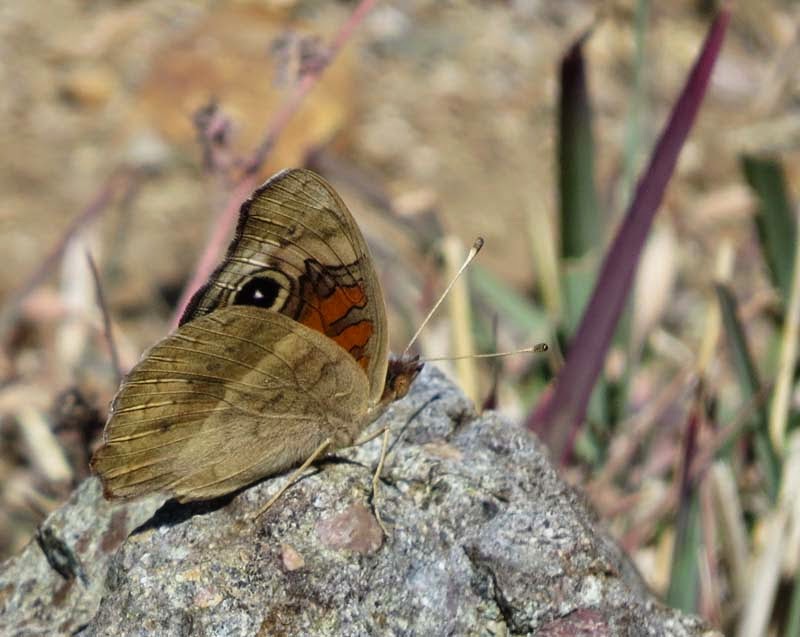 We finally found water, terminating at this plunge pool in California Gulch. Look at the little cleft just above the water line and a couple feet left of the wet area. 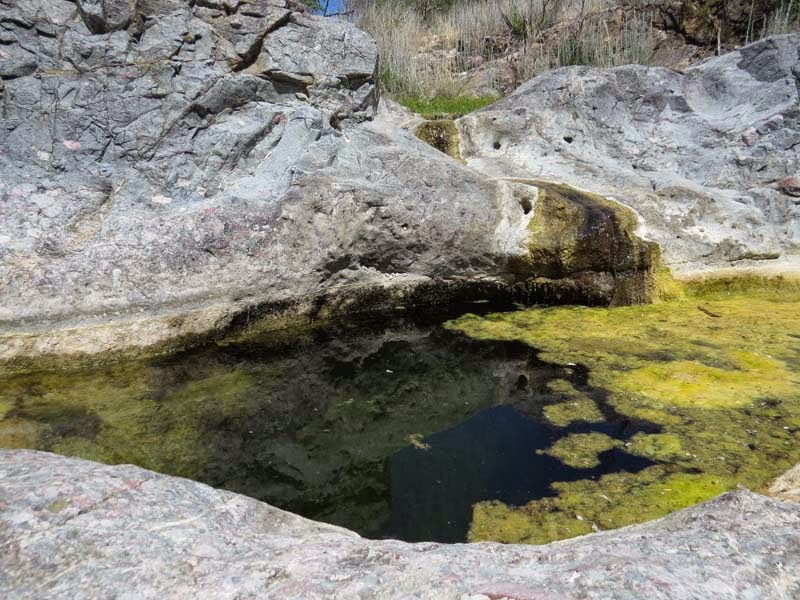 In this cleft were a dozen roosting Canyon Treefrogs, Hyla arenicolor, the most I have ever seen in one spot. 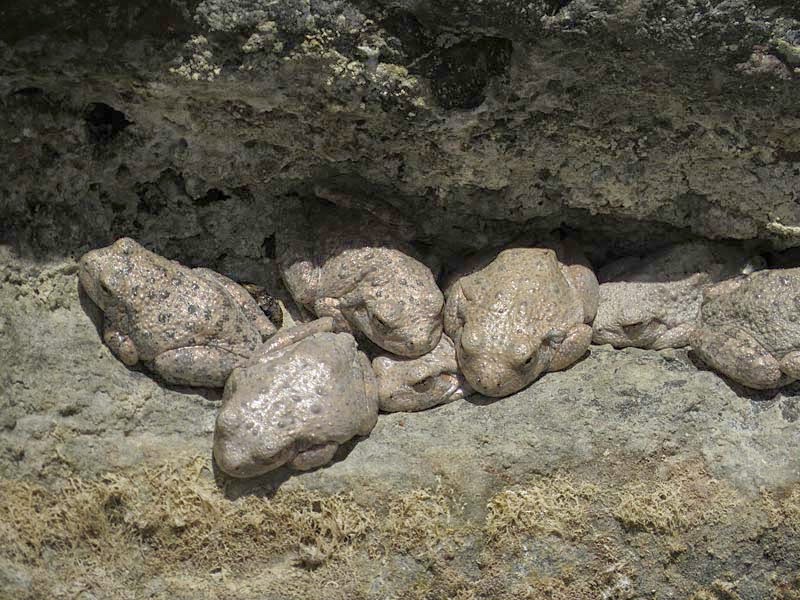 The most abundant butterfly in the area was Marine Blue, Leptotes marina. In among these I found one Reakirt’s Blue, but I missed getting a photo. 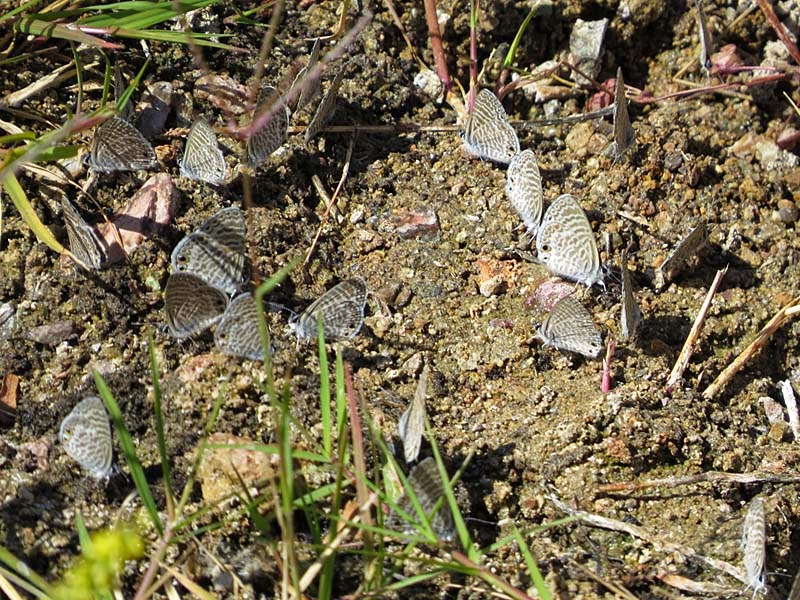 Just above this pool was a nice wet stretch and here we found this fresh female Painted Damsel, Hesperagrion heterodoxum. [Update: Jeremy looked into this further and found that this is not only a male, but that the appendages show it is a Desert Firetail, Telebasis salva. I'm getting rusty with these North American odonata.] 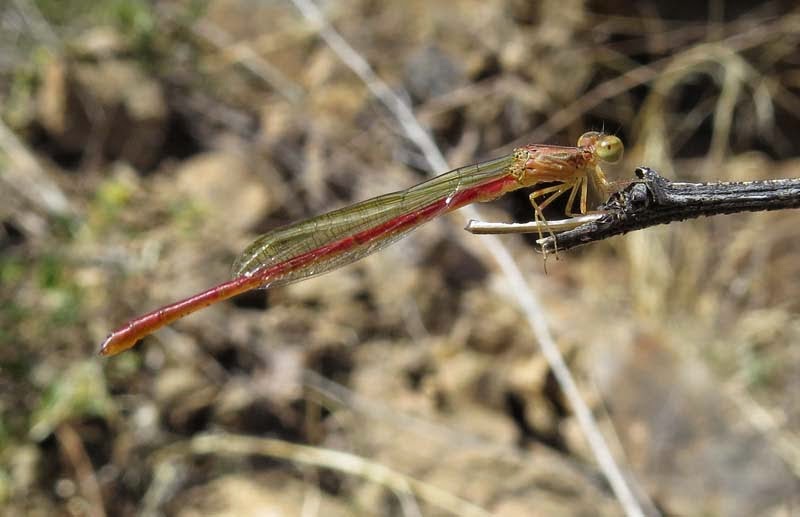 Thankfully, tabanid flies are not that common in southern Arizona. This Western Horse Fly, Tabanus punctifer, probably feeds on the abundant cattle in the area. 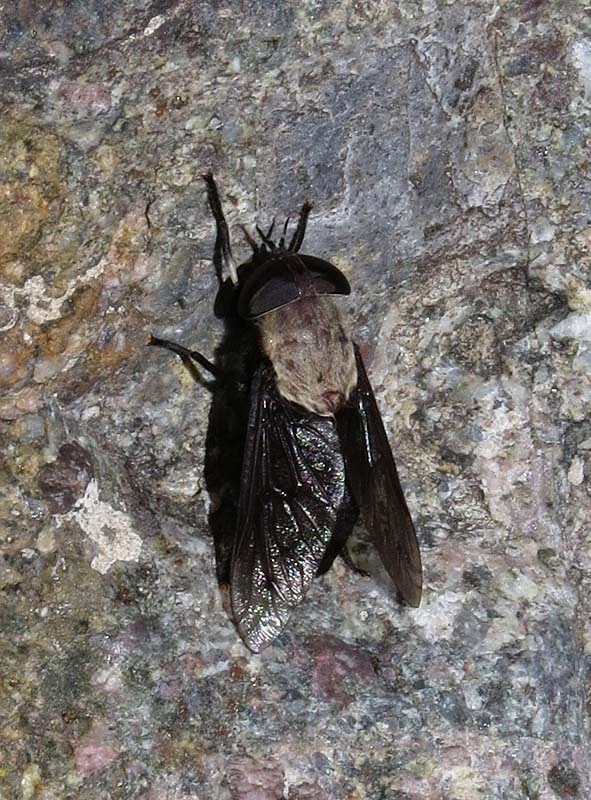 I was amazed to see these spine-waisted ants, Aphenogaster sp. attacking this Master Blister Beetle, Lytta magister, just like army ants. We do have some army ants (subfamily Ecitoninae) in Arizona, but these ants are in the subfamily Mymicinae. 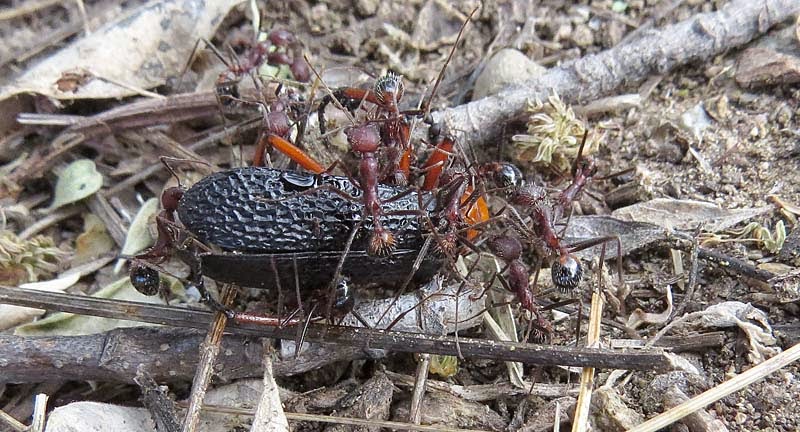 In the very late afternoon, we took a short drive up the Warsaw Canyon Road to explore access to Holden Canyon. This view to the east towards California Gulch is right along the border. The right-most little hill at the edge of the photo is probably in Mexico. 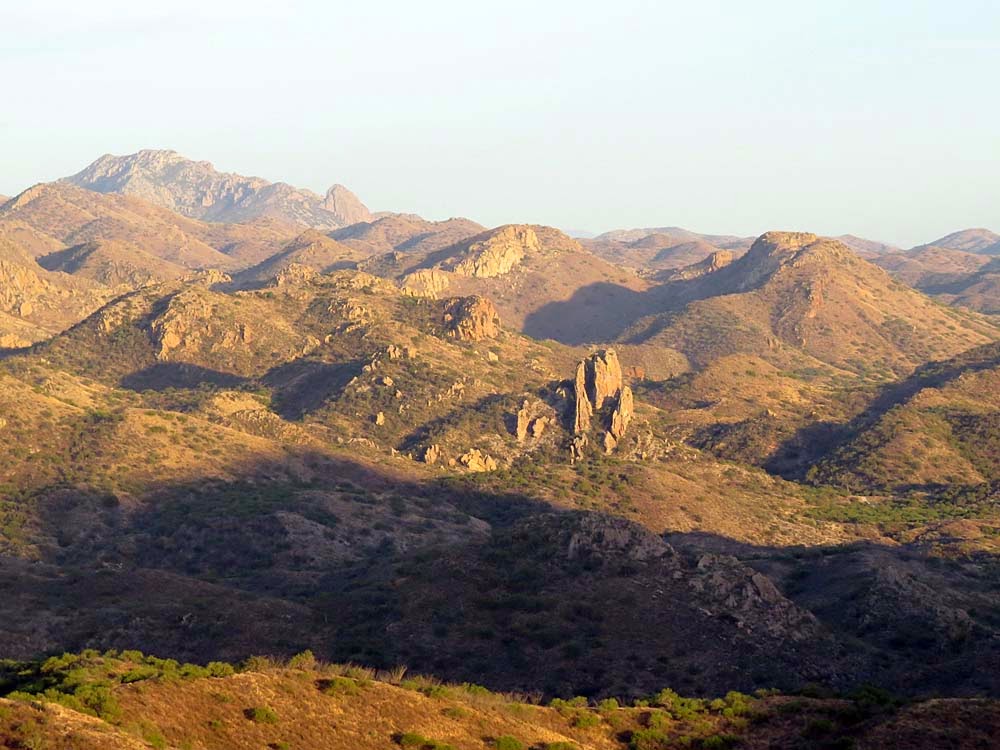 Jeremy was primed from his bat workshop in Phoenix and instantly gravitated toward an old mine shaft that we passed on a side road. This one did not dive deep in the mountain but was rather a simple, level walkway that led to another opening in the hillside above. At first I thought we’d wait to see if bats came out at dusk, but he walked right in and called back that he had a bat. This is a Mexican Long-tongued Bat, Choeronycteris mexicana, a first for both of us. 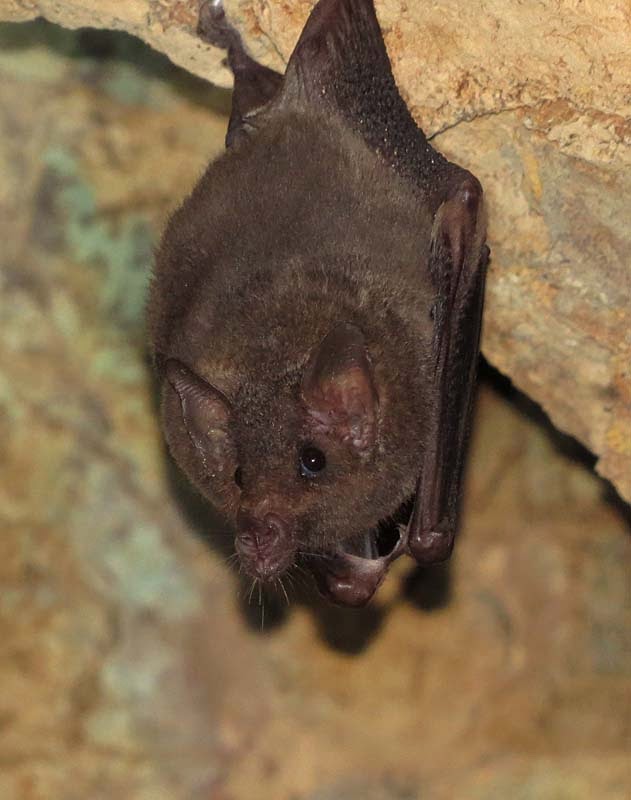 In a nook at eye-level only a few yards into the shaft was this adorable Canyon Wren nest. It had 3 or 4 eggs, and the male wren (presumably) was singing right outside the opening. 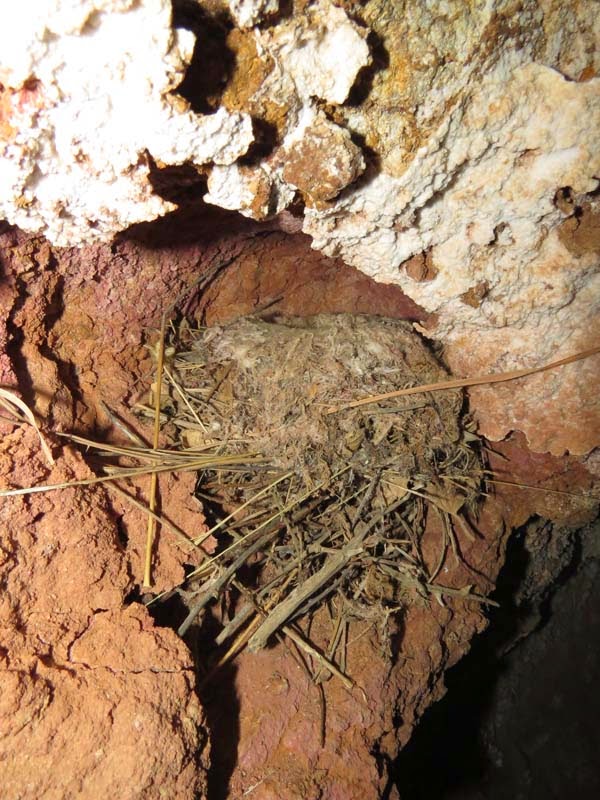 We flushed several Common Poorwill and heard many Elf Owls on our way back to the campsite, and from there we hiked back up California Gulch as far as the plunge pool to see what we could see. This is a thin-legged wolf spider, Pardosa sp. It seems that species-level identification isn’t possible with photos. 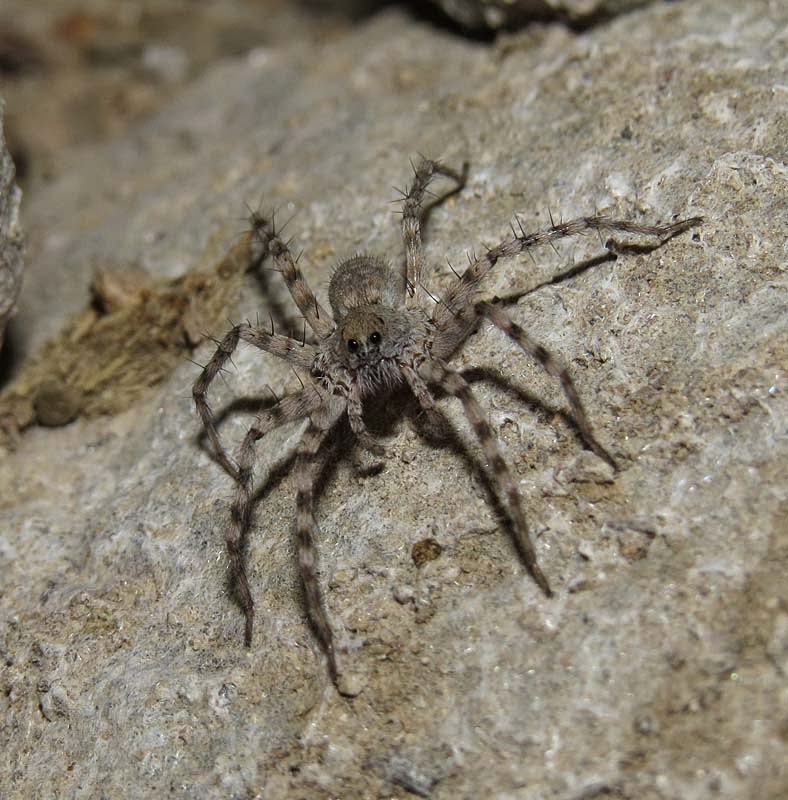 There we dozens, if not hundreds of these dart moths, Protorthodes alfkenii feeding on nectar from the Velvet Mesquite flowers. 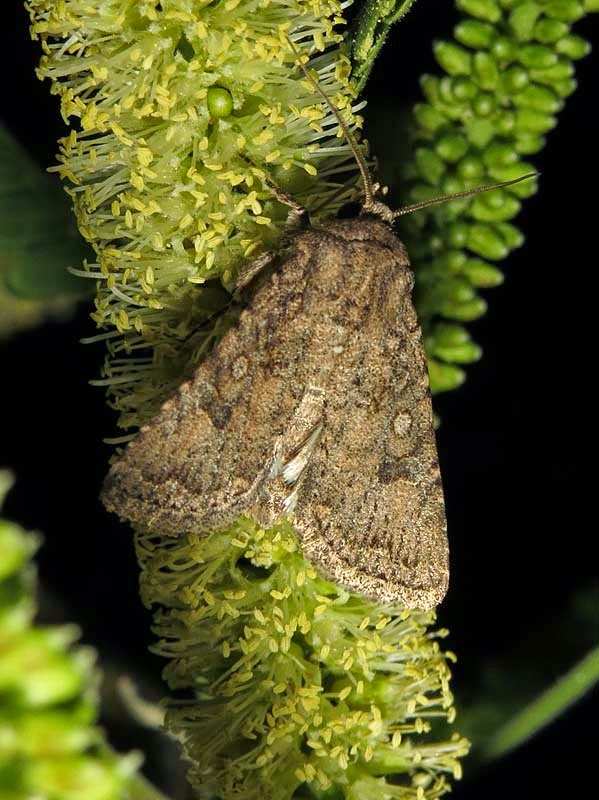 Using my handy little black light I spotted a few of these Arizona Bark Scorpion, Centruroides sculpturatus, the only scorpion of “medical interest” in Arizona. One does not want to get stung by this species. The first photo is using the camera flash, the second is without flash, using only the reflected light from my dim ultraviolet flashlight. 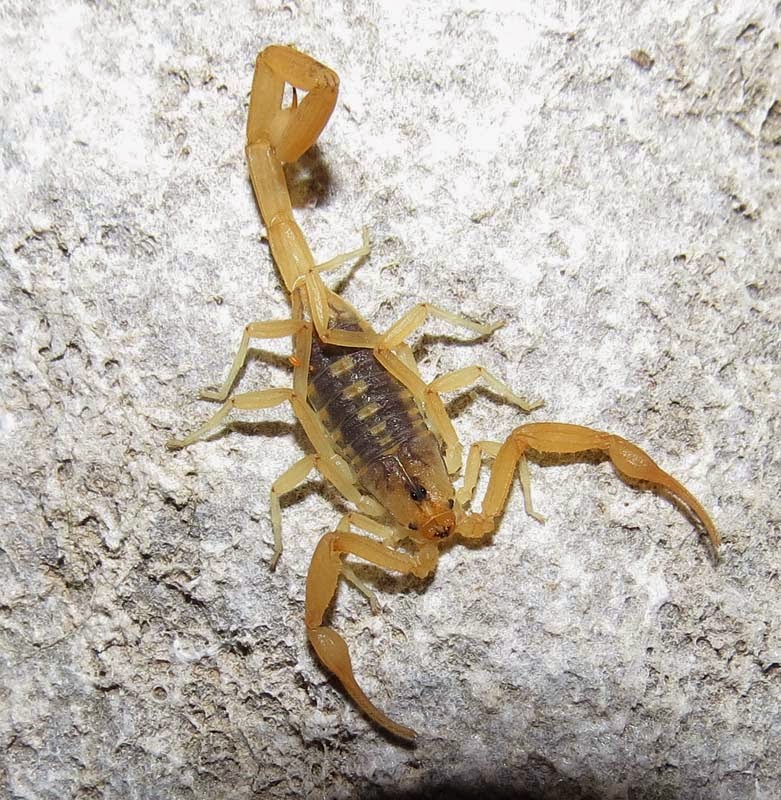 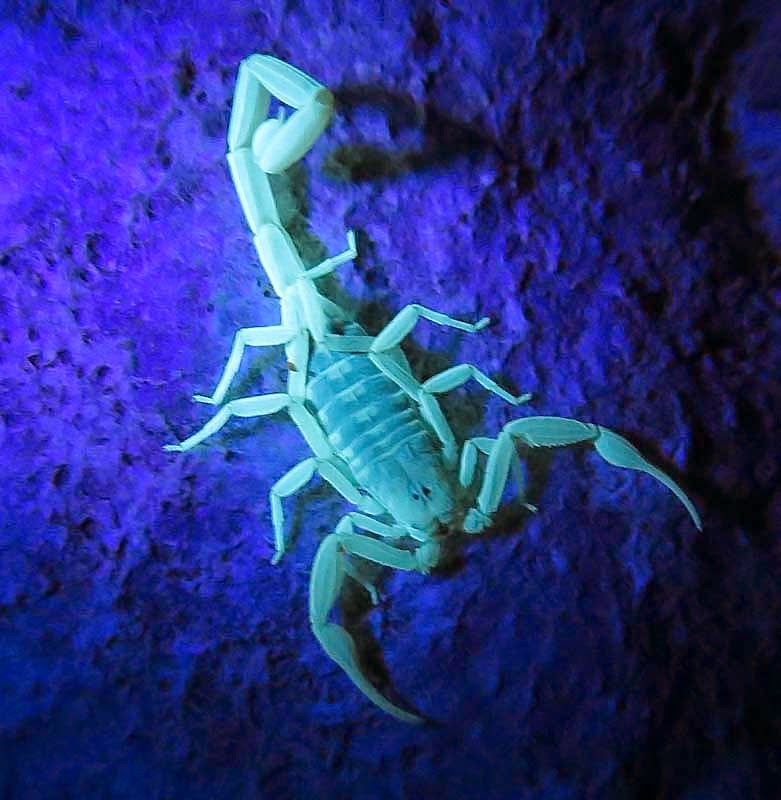 After the passage of the cold front, it was apparently just too cool for snakes. So we headed back to the tents after a long but fun day.
Posted by Birdernaturalist at 12:43 PM