Day 3 in SE Peru: From High to Mid-Elevations

Today Susanne and moved from our lodging at about 9600 feet elevation down to the mid-elevation community of San Pedro at about 4500 feet. The total distance is only 22 miles, but we took most of the day, walking many stretches of road for up to a mile at a time, looking for flocks of birds and seeing many other cool things. It’s quite amazing to see how the habitat changes, and that there are only a tiny handful of species one could possibly see in both locations.

This Violet-throated Starfrontlet perched briefly just below the tunnels only a couple kilometers below Wayqecha Biological Station, but with taller trees we were already in a different habitat. 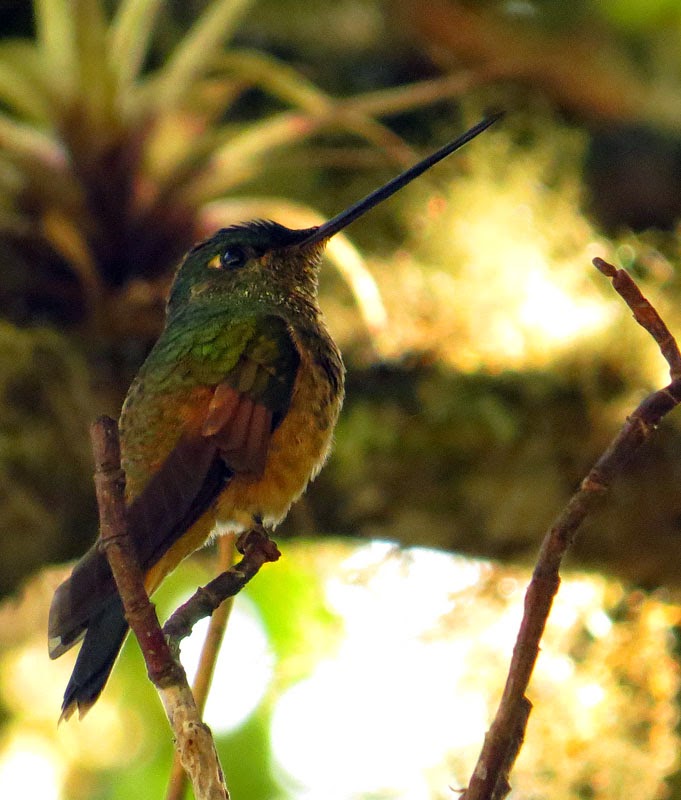 This is an Amethyst-throated Sunangel, and he perched for quite some time, allowing me to actually get the gorget iridescence. 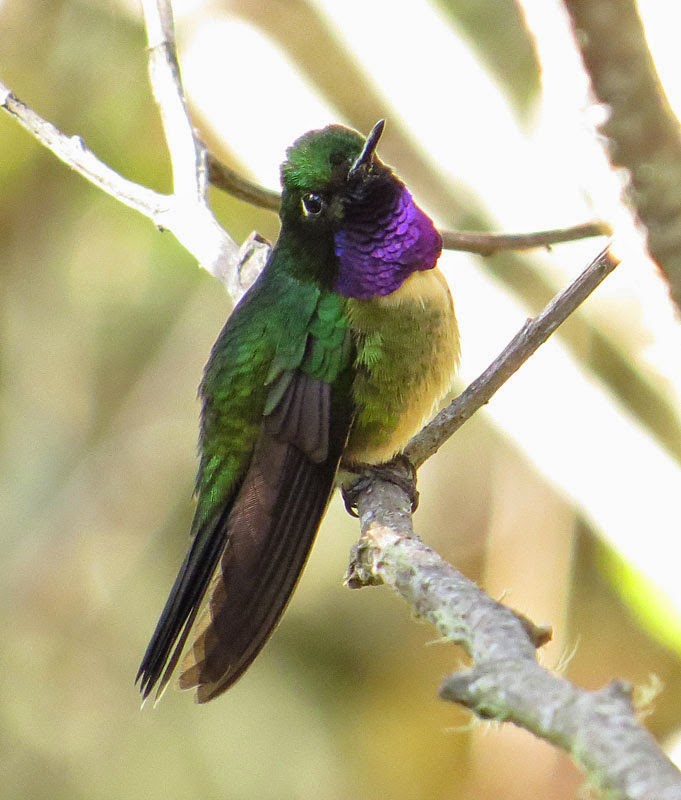 One stretch of the road had several of these Gunnera species. This is a distinctive genus, somewhat resembling rhubarb with its huge, round leaves, and I see an even larger species on my Costa Rica tours. There are over 60 species worldwide, but all are only variations on a theme, and while they are related to other advanced flowering plants, oddly the only close relatives are a couple of species of plants found in drier habitats in Madagascar and southern Africa. 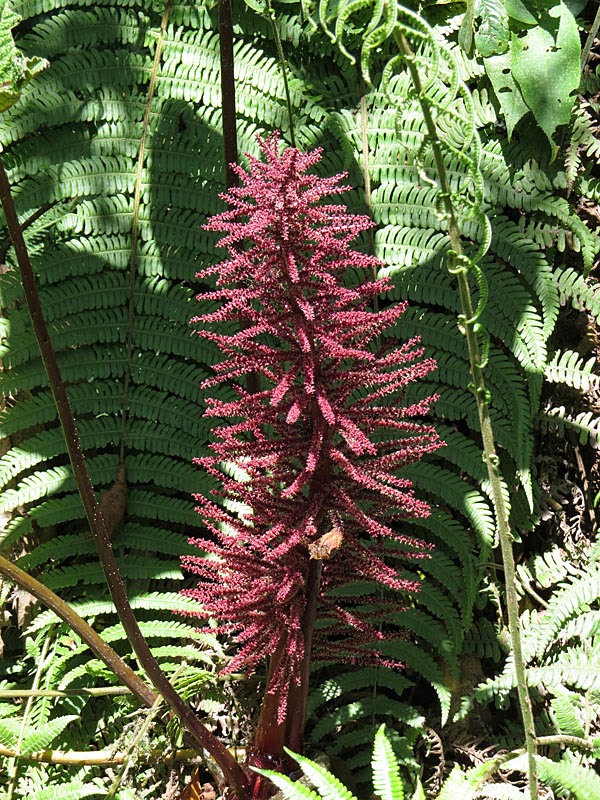 As we dropped in elevation below the settlement of Pillahuata, we saw our first of four Golden-headed Quetzals. Where were they when I was here with the butterflies & birds tour? 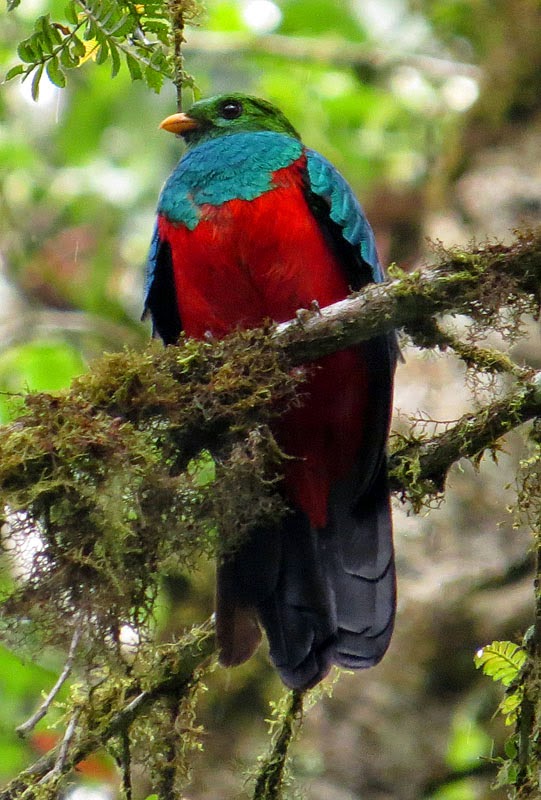 Likewise with this butterfly: White-banded Lyman, Lymanopoda albocincta; we had five species of this genus last month, but not this one. 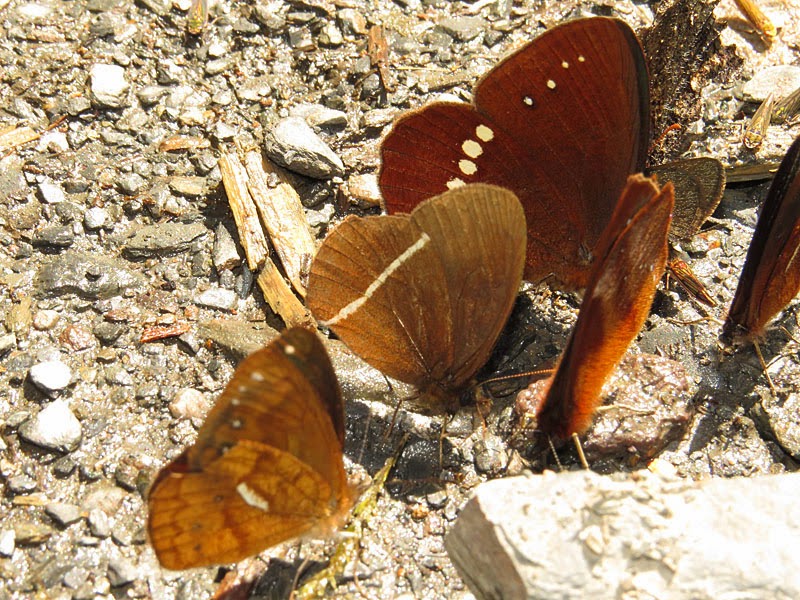 We did have one of these, a Star-dusted Lyman, Lymanopoda obsoleta. 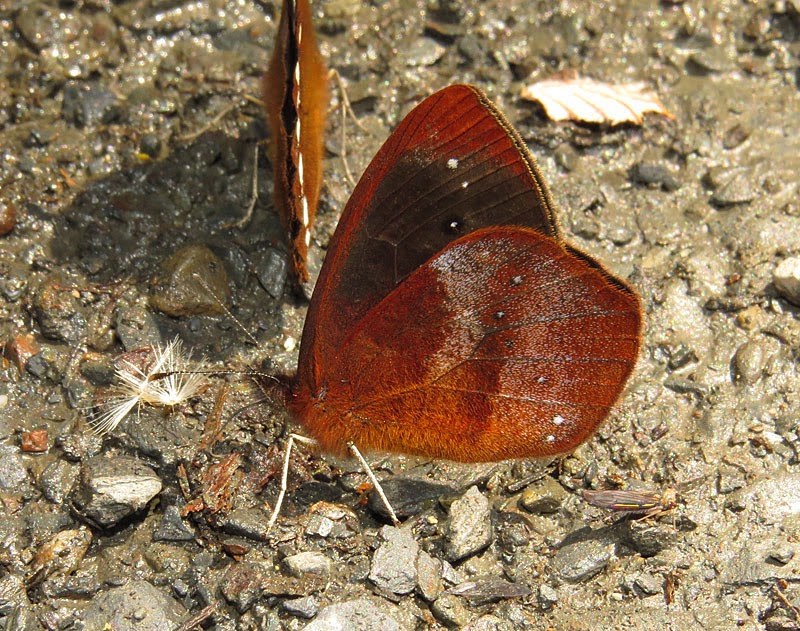 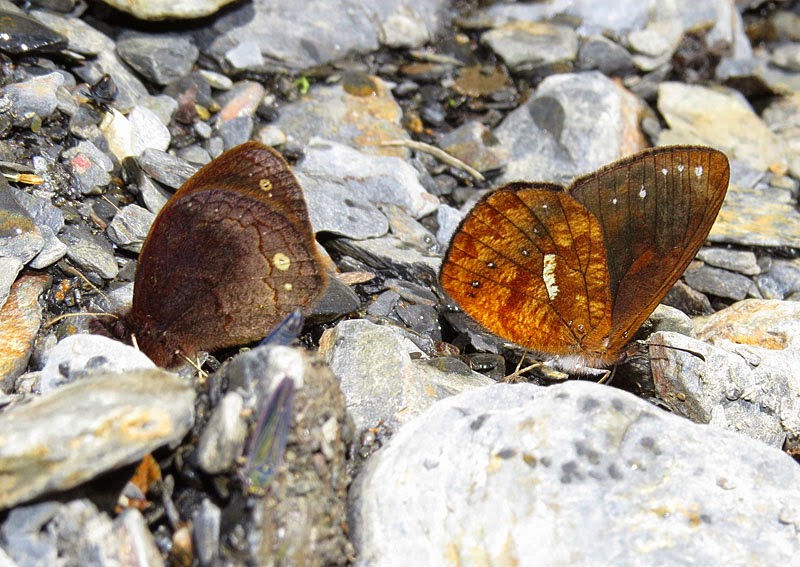 Oh my gosh, yet another lep we didn’t see on the tour with nearly 500 species: Mimardaris lomax, the Lomax Firetip. 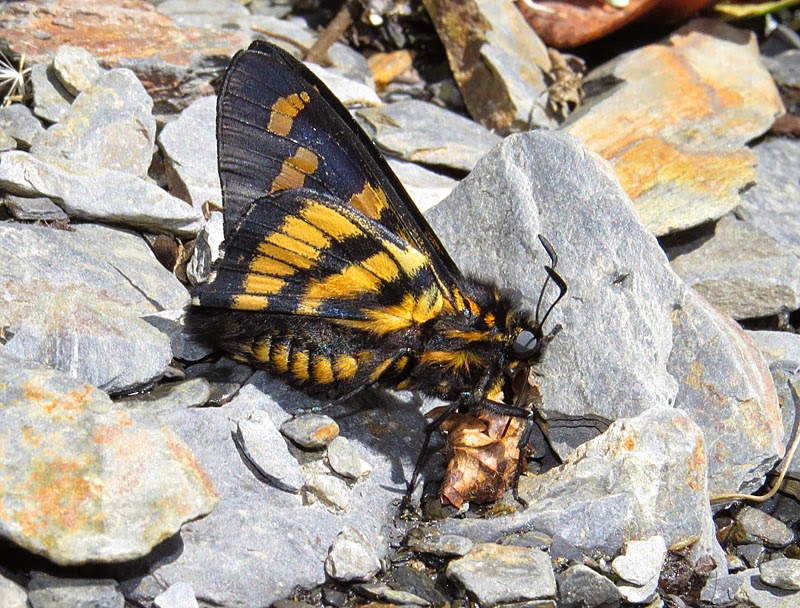 This is another Peruvian lily relative, Bomarea edulis. I haven’t yet learned what’s edible about it. 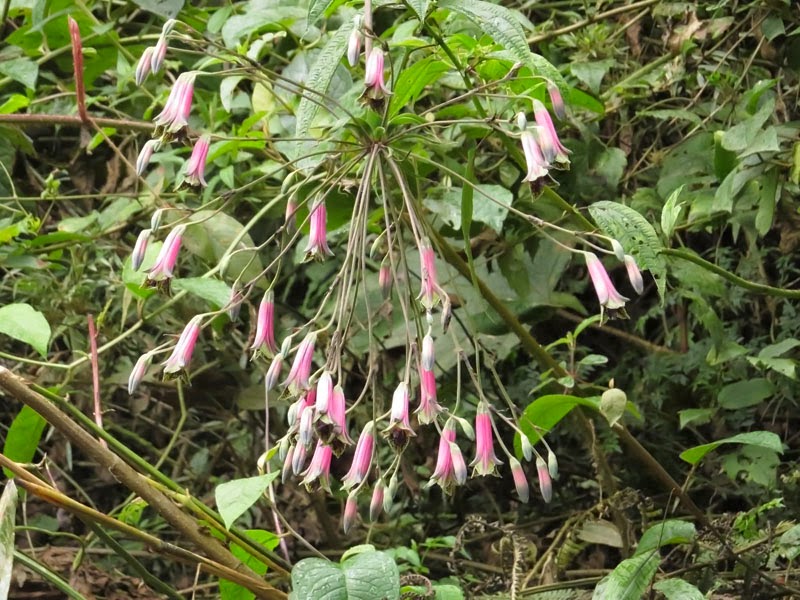 We were still pretty high in elevation when I saw a bird flit out from under the vegetation overhanging the bank to the right of center. 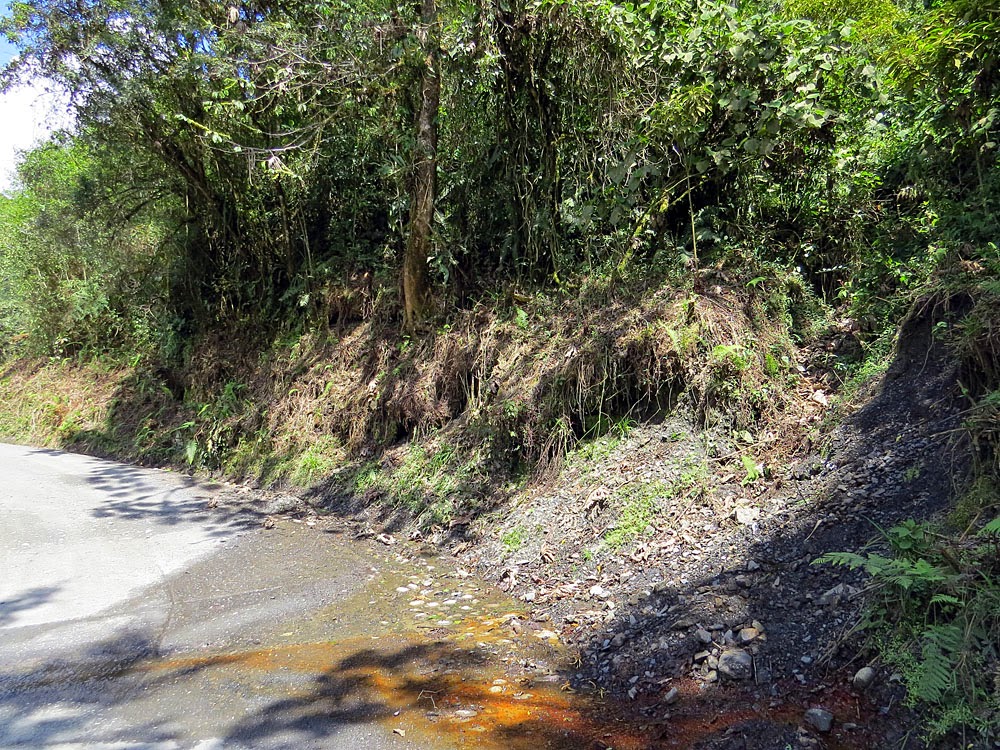 Then I heard it, and then with playback we got eventually got great views of this Inca Flycatcher, a Peruvian endemic that occurs at a limited elevation from close to the Ecuadorian border in the north to near the Bolivian border in the south. 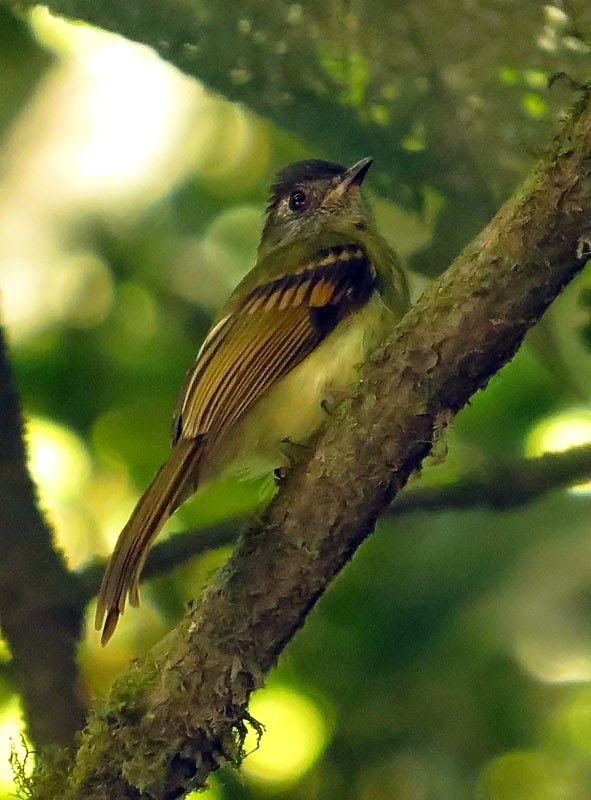 Curious about where I had seen this bird fly from, I took a closer look (photo by Susanne). 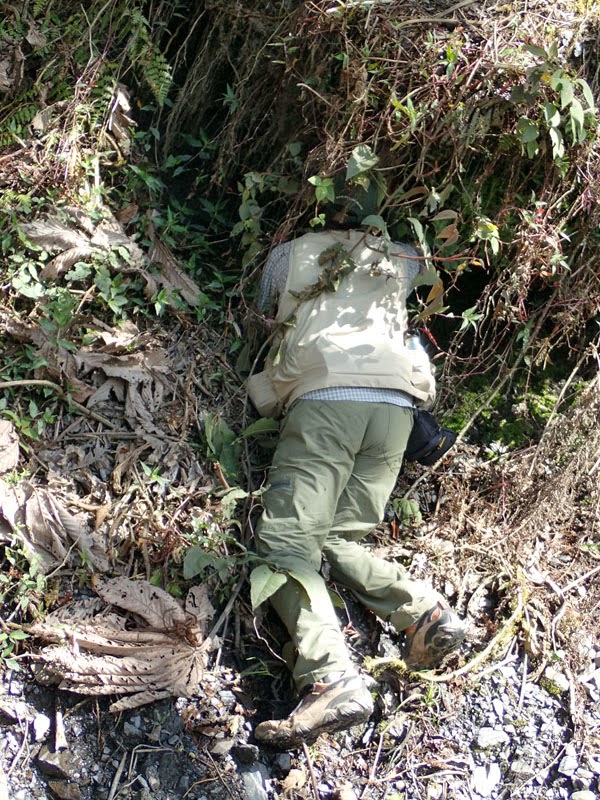 Sure enough, there was the nest of the Inca Flycatcher, though there were no eggs yet. According to the Cornell Lab of Ornithology’s Neotropical Birds website http://neotropical.birds.cornell.edu/portal/species/lifehistory?p_p_spp=430761, the nest and eggs of this species are still undescribed. It’s a fun discovery, but I don’t really welcome the work that entails describing a new nest. Where’s Harold Greeney when you need him? 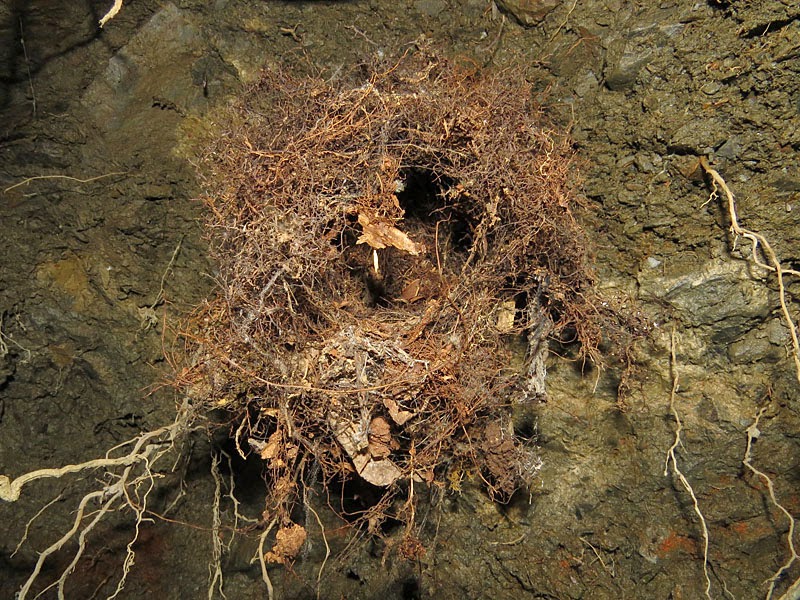 A little further down, we saw this Greenish Puffleg, in the same area where a month ago my tour group had seen two. It’s a rarely observed species in this region, so I was very glad to have gotten at least a blurry photo that seems to clearly rule out any other species. The leg puffs are frequently hard to see on this bird, and only with my recent close observations in northern Peru have I become confident in identifying this little-known species (which is otherwise unidentifiable if you’re only relying upon the limited illustrations in the Birds of Peru field guide). 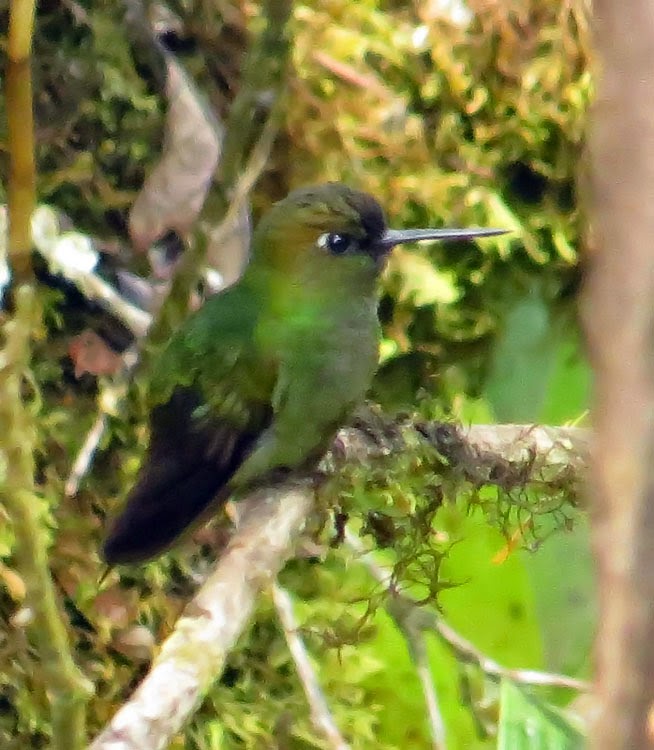 This Andean Solitaire seemed to be more concerned with another bird singing nearby and postured on this branch for several minutes, vocalizing off and on, until a truck drove by. 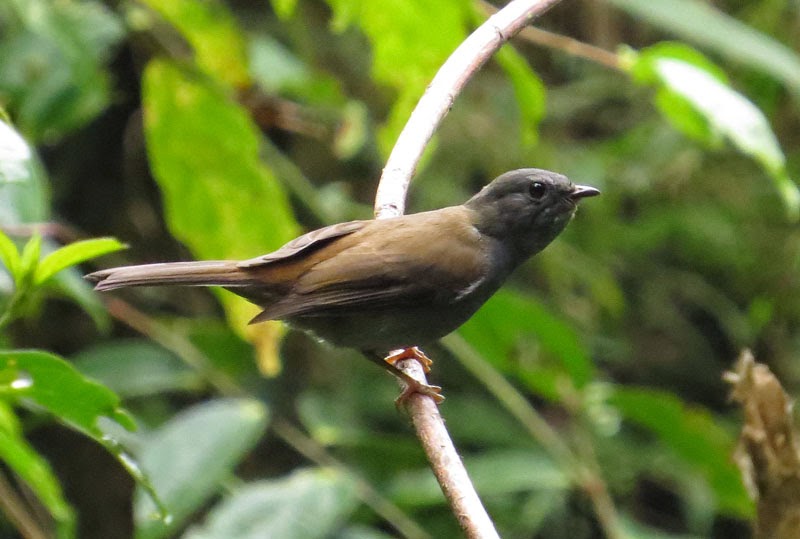 Hummingbirds are clearly one of the dominant groups of birds in this habitat. This Long-tailed Sylph sat just barely long enough for me to get a shot. 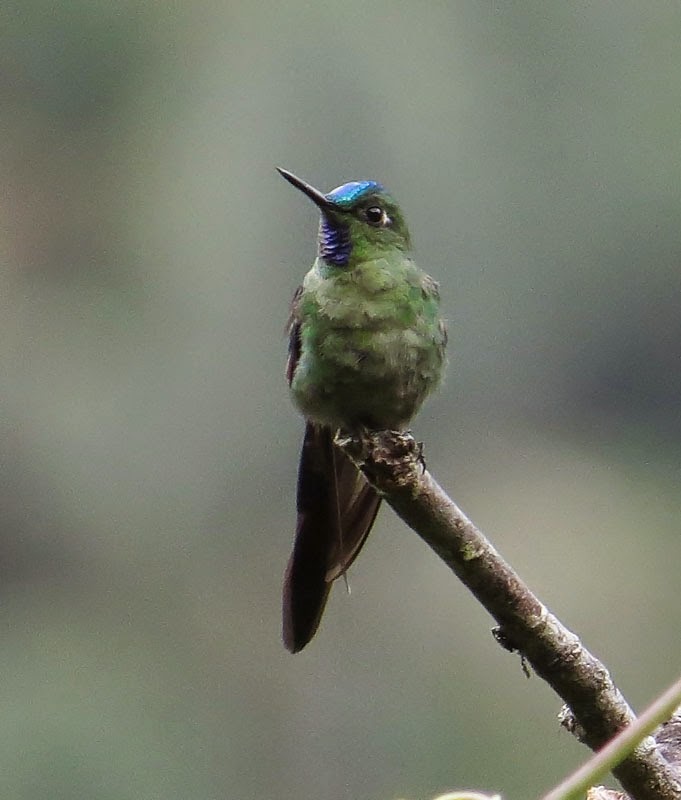 This Booted Racket-tail wasn’t quite so cooperative, but at least you can see what it is. Note the rufous booties and the way the long tail feathers cross – if you’ve seen the birds in NW Ecuador that are also called this species (with their white booties and tail feathers crossing in the opposite direction), you’ll understand why splitting them is not a radical addition to the world list but merely correcting a stupid error by whomever created the initial master list for the region. 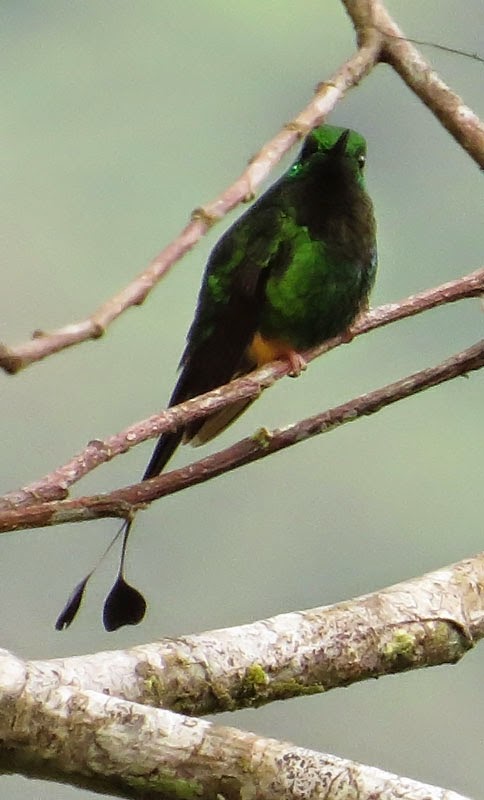 This is a flower in the genus Marcgravia, family Marcgraviaceae. Birders are more familiar with the genus Souroubea, with the bright red bracts below the long flower spikes bearing the nectaries that attract so many birds. This genus is much less known, despite being the type for the family. Georg Marcgrave was a 17th century naturalist who was one of the first to describe the natural history of South America. 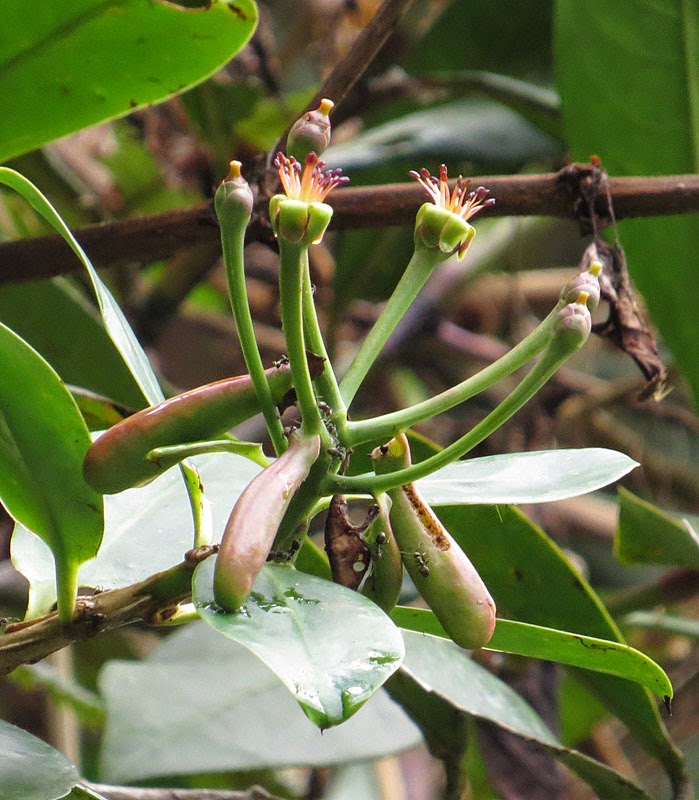 My 50x Canon camera barely captured this metalmark Ithomiola tanos. It turns out that there are a couple specimen records from here, but it’s otherwise virtually unknown in life. 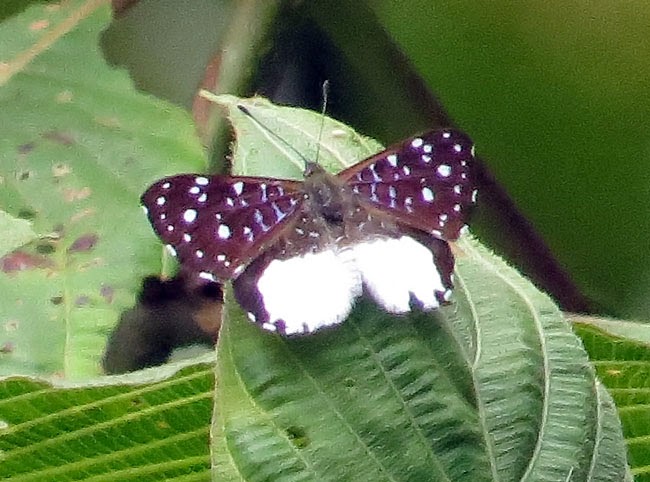 Our last stop of the day was the Mirador, looking down the Kosñipata Valley. Our lodge for the next night is on a tall bank above the left side of the river, right at the sharp line between shade and sun in the upper center of the photo. It doesn’t look that far from here, but it is actually a slow 3.7 miles and 20 minutes’ drive from here, past many unbelievably juicy mixed flocks and rare cloud forest birds. 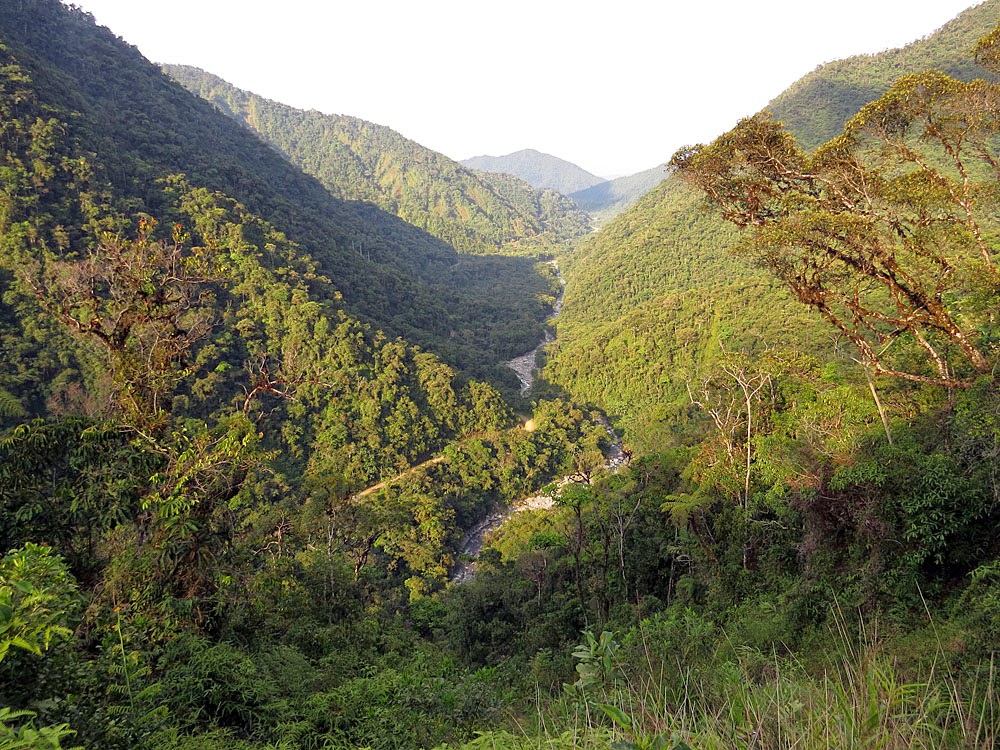 Just before we pulled into the driveway of our lodge, this Andean Motmot flew in front of our vehicle and perched on the power line just outside my window. 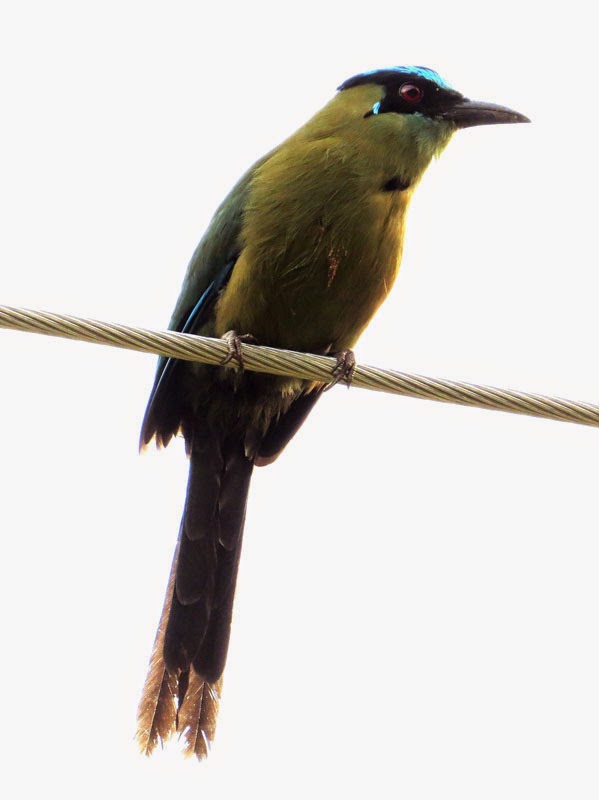 Posted by Birdernaturalist at 8:50 PM