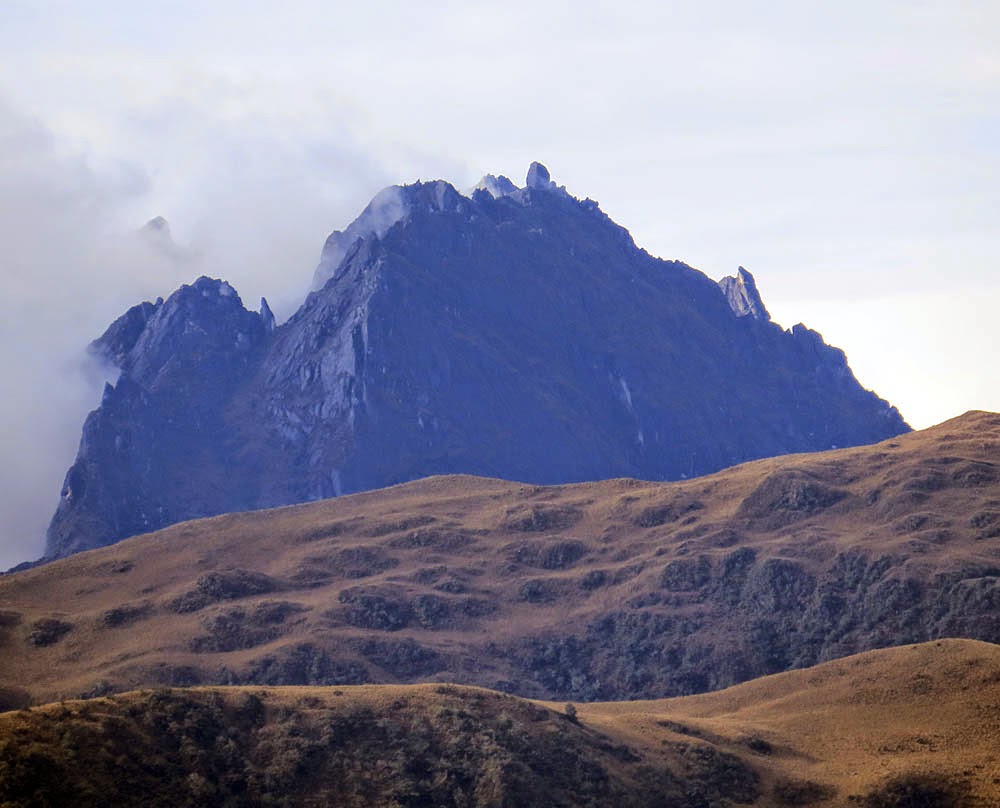 This is the first of a series of posts I have saved up from a two-week private tour I led down the Kosñipata Road and down the Madre de Dios River in southeastern Peru in late October and early November.

This was an unusual private tour with an unusual client. First it was with a single client, and 14 days in the field. Only once before have I led a tour of this length with one client, 15 days in Costa Rica over a decade ago. Second, my client didn’t exactly fit the usual birding tour demographic: she’s female, younger than me, and German. But as a lawyer with a long career in a big firm, Susanne is smart enough to know what she wants and can afford it. Like me, she’s very lucky to have a burning curiosity about nature and a thirst for knowledge and discovery.

So the purpose of this tour was to spend more time in a region she got to know a little bit on my WINGS tour here last year (and being offered next year too, by the way), but this time at her pace, which means very slowly, no pre-dawn or late night outings, and many stops for mushrooms. It turns out she’s become quite an expert in Neotropical mushrooms over the past couple of years.

Our first day, October 25, was largely a travel day, starting with a morning flight from Lima to Cusco, where we met up with our driver César and his van for the next few days. From there we drove to Wayqecha Biological Station, with only a couple stops along the way.

This is our travel route. From Cusco, we go southeast down a narrow valley in the high, dry Andes to where the Cusco River joins the Vilcanota (lower down Urubamba) River. From there, we go up and over a pass at about 13,000 feet, then down into a deep canyon to cross the Paucartambo River, then back up and over Acjanaco Pass. From there one descends to the Kosñipata Valley and the Amazonian lowlands through wet cloud forests. Our first two nights' lodging were at Wayqecha, located in the upper elevations of those forests, just a few miles below the pass. 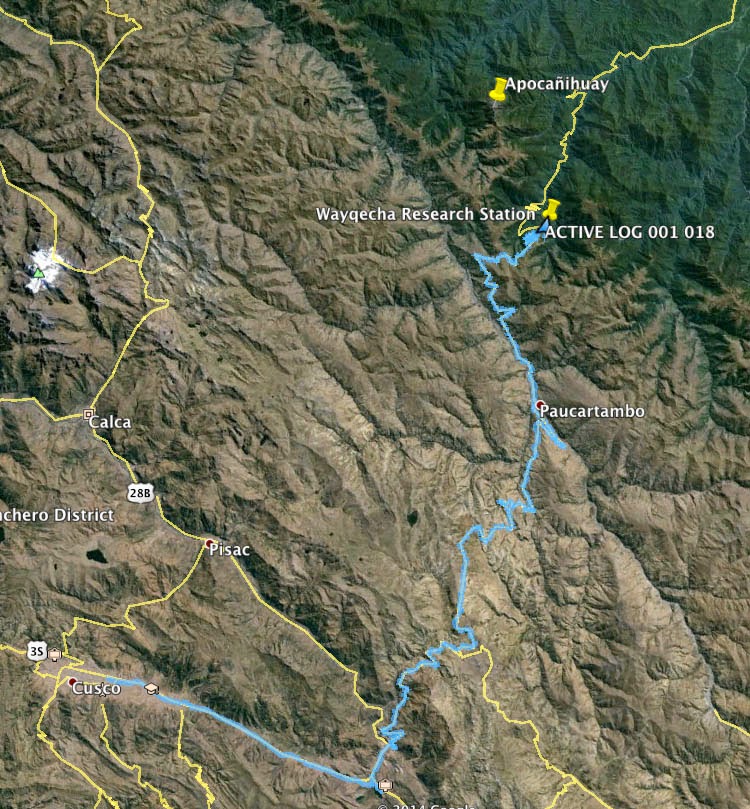 Just a few miles before you get to Acjanaco, the habitat is clearly wetter than before, with frequent mist and drizzle creating habitat for a greatly increased diversity of species, especially hummingbirds, but also several passerines such as the endemic Creamy-crested Spinetail, which we saw well. 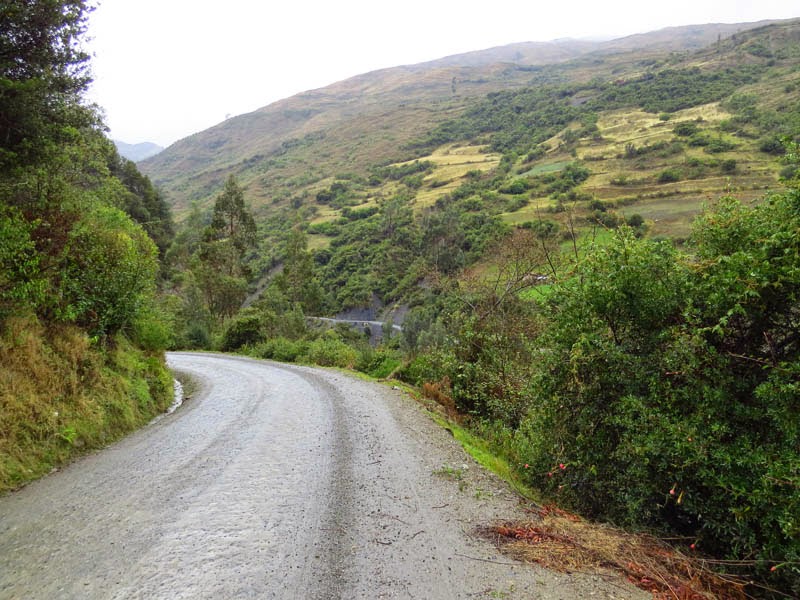 One of the common birds in this area is the Black-throated Flowerpiercer. They actually do pierce the base of flowers with that unusual bill, stealing the nectar without pollinating the flower. 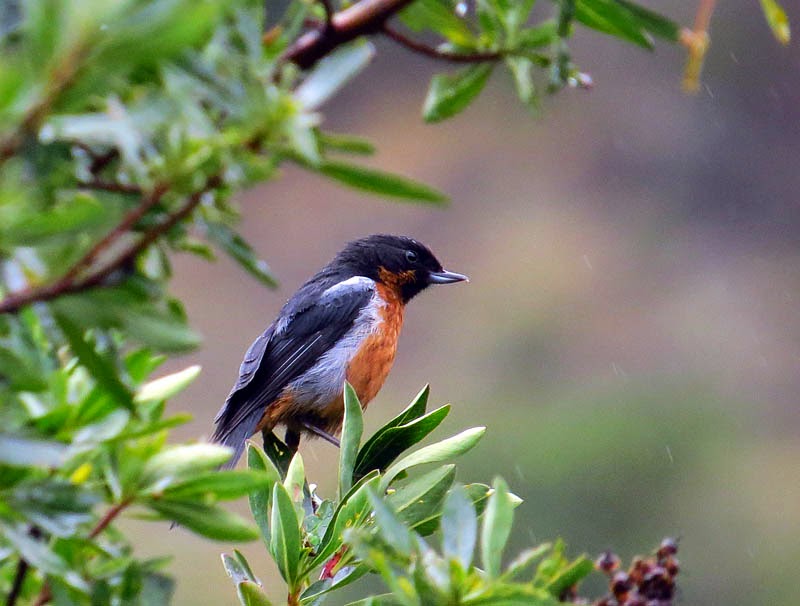 There are quite a few flowers this time of year. This shrub is a Vallea stipularis, in the family Elaeocarpaceae. I don’t know if hummingbirds use it or not, but I’ve never seen anything at it. 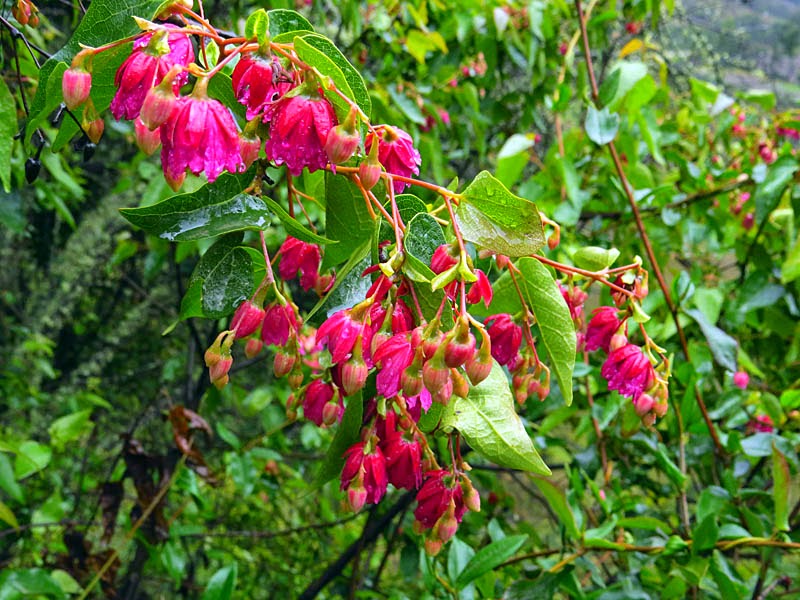 This is one of several Bomarea species in the region; it’s in the same family as the familiar florist’s Peruvian Lily (Alstroemeriaceae), and I have seen hummingbirds visit it. 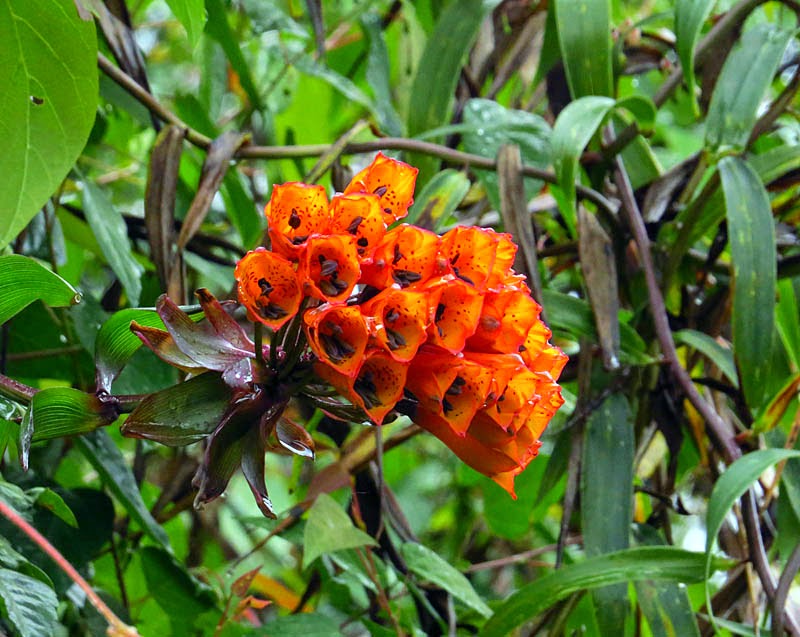 Susanne is getting a photo of the passion vine Passiflora mixta growing abundantly on the roadside here. 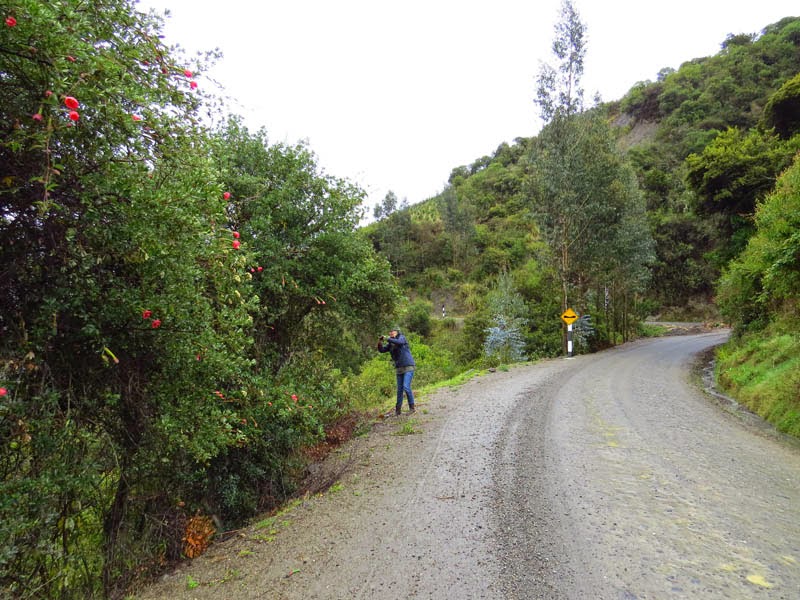 With its long tube, this flower has nectar that is not within easy reach of too many birds. 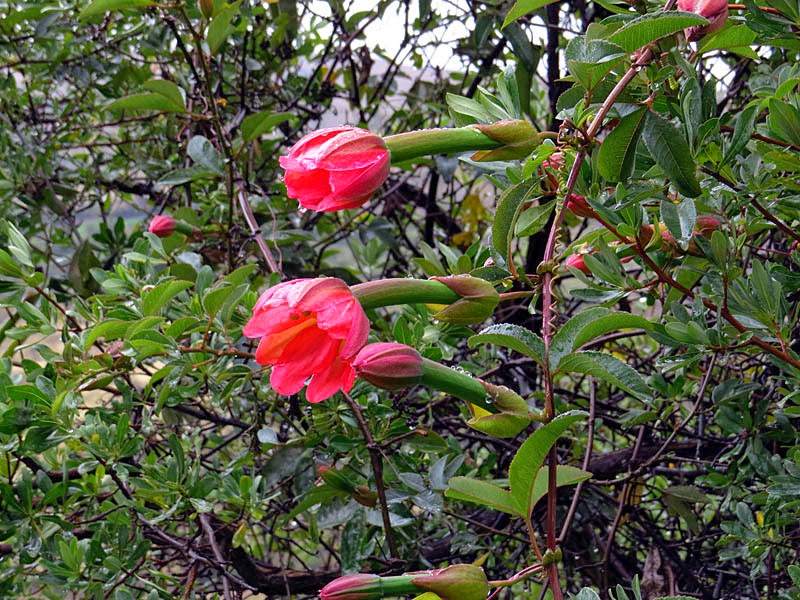 So I was only moderately surprised to see this Sword-billed Hummingbird fly in when I began imitating Yungas Pygmy-Owl. It parried the approach of a Shining Sunbeam several times to take a perch right over our heads. I’ve rarely seen this species so well away from the two or so feeding stations it’s known to frequent in northern Peru and Ecuador. 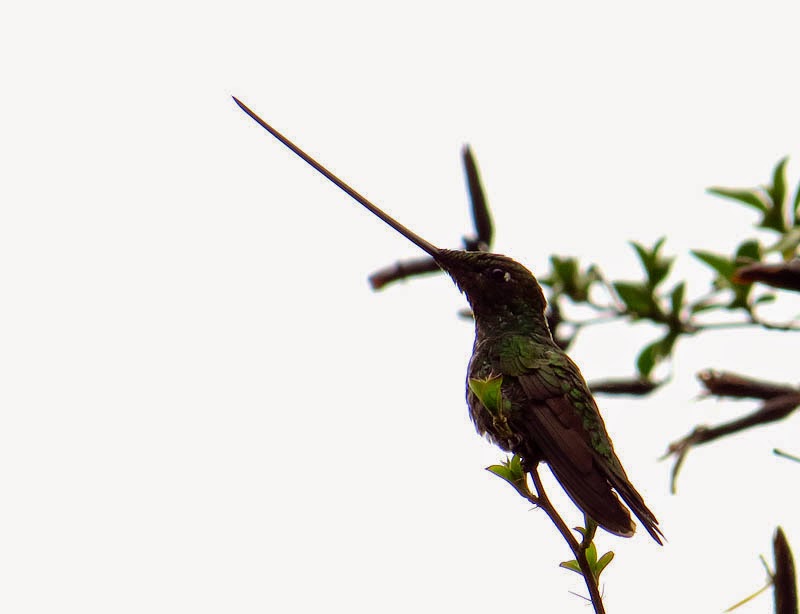 We reached the pass at Acjanaco, where the road borders the upper reaches of Manu National Park, in the late afternoon. 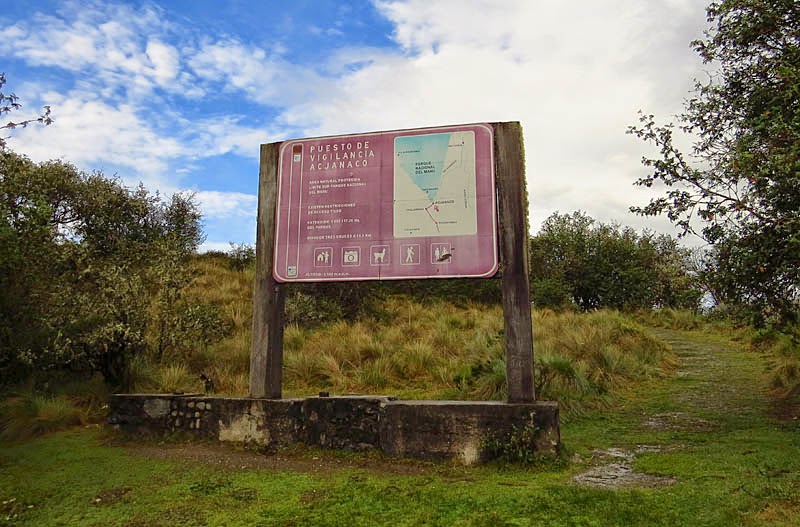 The view from here of the rocky peak named Apocañihuay was stunning (photo at top). It seems quite impressive as it juts so dramatically above the surrounding dry puna and cloud forest, but at 13,180 feet (4017 m) it’s barely higher than the pass we traversed earlier in the day on a broad, well-cultivated ridge.
Posted by Birdernaturalist at 6:07 PM