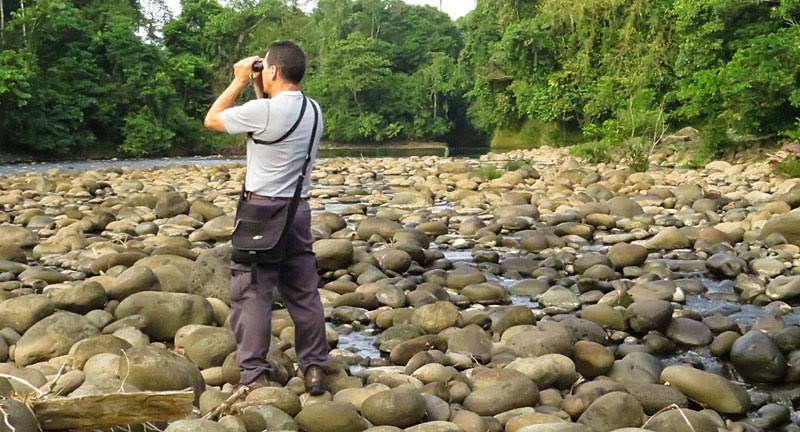 We saw enough cool stuff during just one morning, one afternoon, and on a couple night walks at our Sueño Azul lodge to warrant its own blog. It’s an active cattle ranch, but with brushy, regenerating pastures, many remaining old trees and small patches of forest connected to larger areas of extensive foothill rainforest, as well as strips of trees along two small rivers and a series of small ponds, it has an extraordinarily high diversity of birds. For example, after our full morning and early afternoon at Braulio Carrillo National Park (a couple photos from which I’ll post in the next blog), we had seen and heard 59 species, many of them very good ones. But in just 2 late afternoon hours on the entrance drive and grounds of our lodging, we had added another 72 species, for a day list of 131 species!

One of the birds we had been looking for was this Canebrake Wren, mistakenly lumped with the Plain Wren by someone unfamiliar with the species in real life in some decades passed, a mistake puzzlingly perpetuated by the AOU to this day. It doesn’t take a genius to realize that two birds that look and sound different, occupy different habitats, and have an adjacent but non-overlapping distributions are different species. This one really is one of the plainest of all wrens, living in low-lying, moist thickets of fern and grass on the Caribbean slope. The nominate group of true Plain Wren, which we had seen near Monteverde, sports a lovely buff wash below, lives in dry, brushy, and viney areas, and sings a song twice as fast and so much higher that even the most tone deaf of birders can tell the difference. Anyone but an early 20th-century ornithologist confined to the museum would fairly assume that the birds can hear the difference as well. 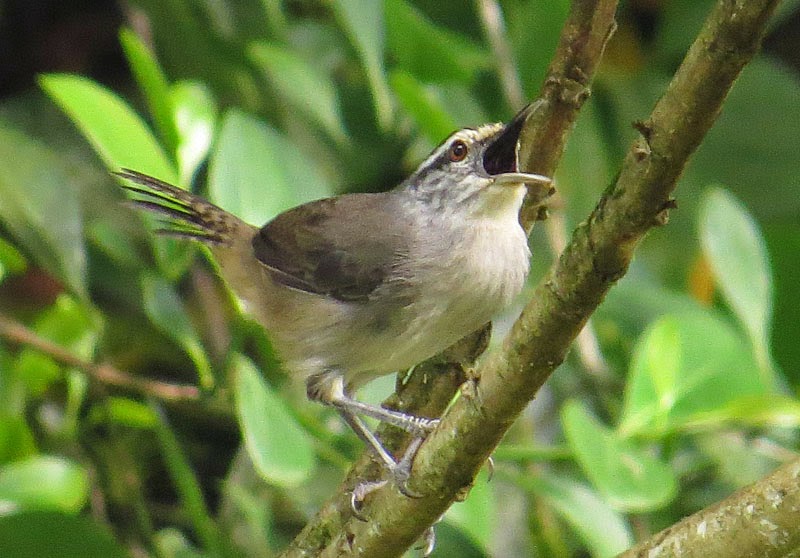 This easily overlooked bird is a Plain-colored Tanager, often hard to see in fast-moving flocks in the canopy. We got to watch this one at length just past the fence gathering nesting material in a brush pile. It somewhat resembles Palm Tanager (and I once overheard a professional guide misidentify one of those as this species) but lacks any hint of color on the crown and has an entirely dark wing, including the wing coverts (Palm Tanager has oddly contrasting dark flight feathers, with wing coverts that match the color of the scapulars and back). 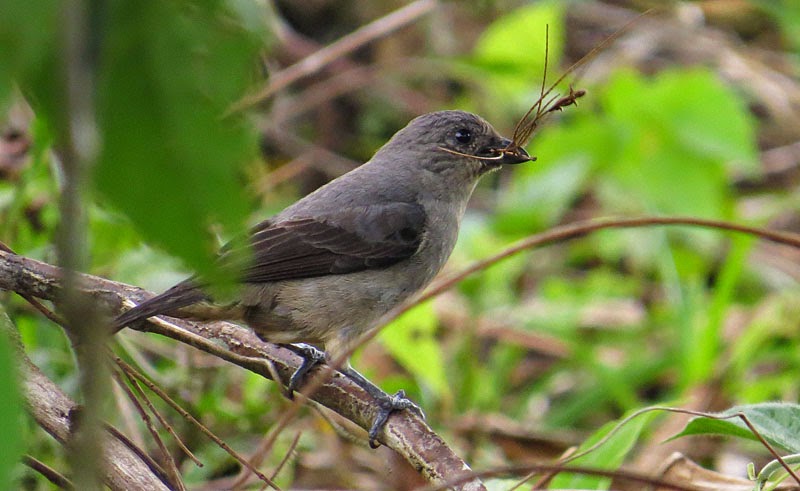 At breakfast from this location we watched Gray-necked Wood-Rails on the lawn, Green Ibis flying over and babbling in Portuguese (even here they say coró-coró, which is their Brazilian onomatopoetic name), and spied Fasciated Tiger-Herons feeding in the river. In the top photo, our driver and excellent birder Ricard is helping to scan for Sunbitterns while a Bare-throated Tiger-Heron can barely be seen up to the left of center. 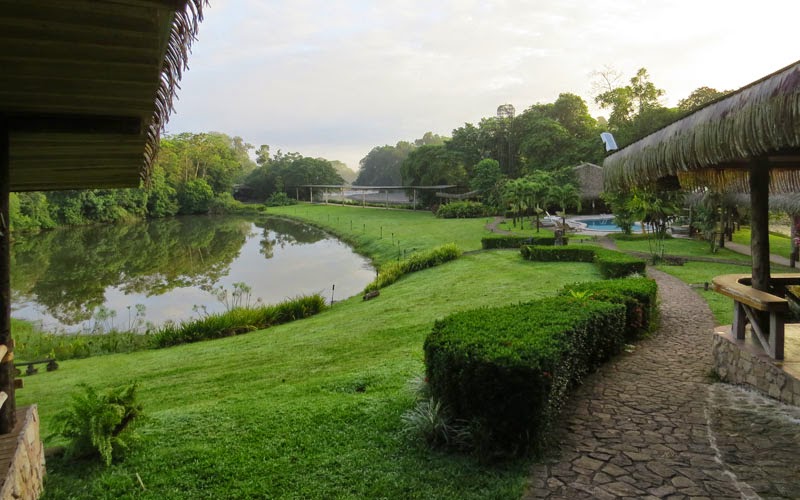 This Broad-winged Hawk, probably having spent the night here on its way back from, say, the Owlet Lodge in northern Peru, was sunning itself before continuing its journey north, perhaps to Maine. 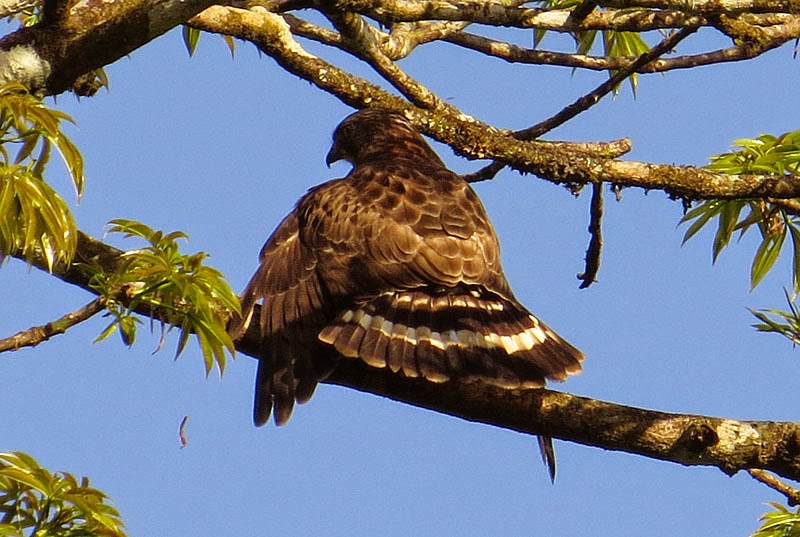 We took a walk into a strip of forest that is connected to larger areas of forest. We saw Crowned Woodnymph here, perhaps after having fed from this Columnea nicaraguensis, an epiphytic lipstick vine and member of the family Gesneriace blooming over the road. 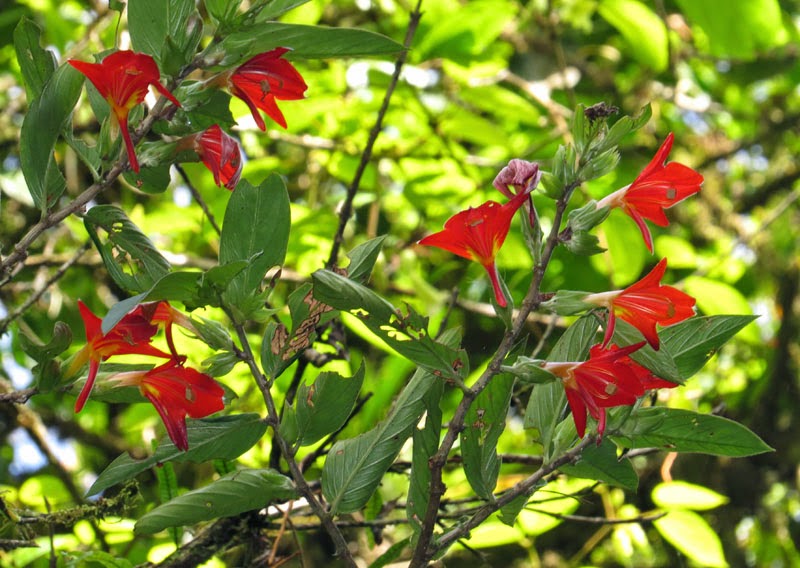 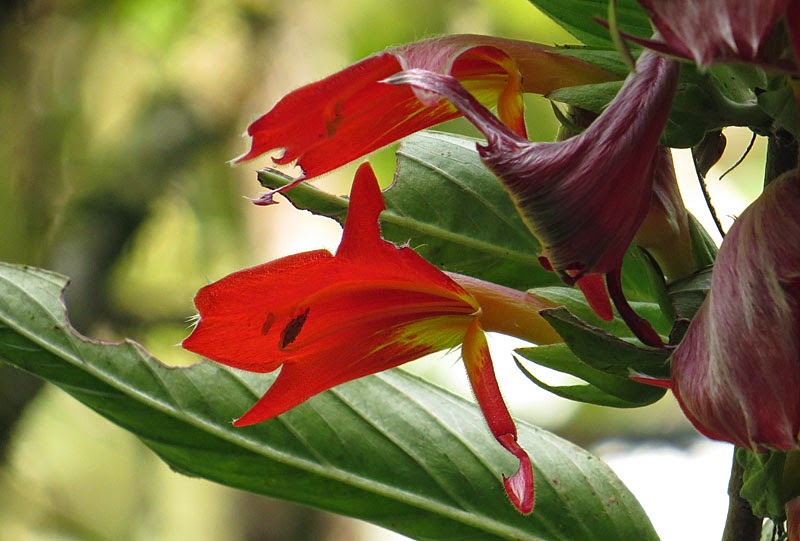 We had great views of a pair of Royal Flycatchers and White-collared Manakins, and then when we reached another clearing heard an awful screeching of a raptor which I couldn’t place or locate with my eyes. When one participant said he saw something whitish move deep in a tree, I knew he had spotted a White Hawk. Soon we were watching two of these glorious birds perched in a large, leafless tree, and later they soared in tandem in the same skies where we had just seen King Vulture and Double-toothed Kite. 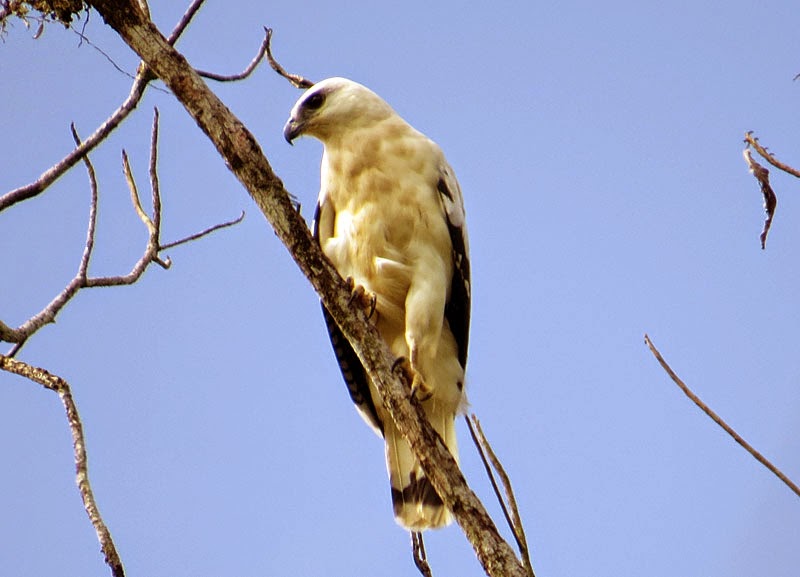 Right by our rooms was this handsome male Green Basilisk, Basiliscus plumifrons, one of three species in the genus we saw in Costa Rica. 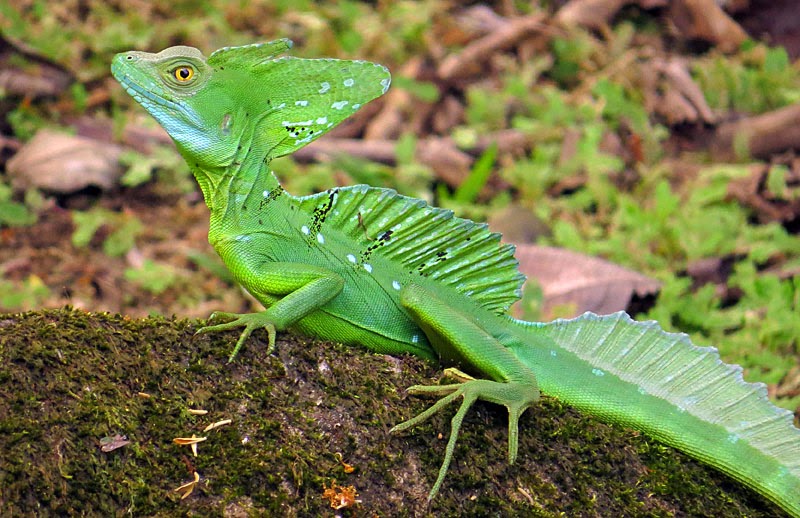 This is the gecko we commonly see and hear around lights in the lodge anywhere in the tropics. It is Common House Gecko, Hemidactylus frenatus, which I confirmed by grabbing one and examining the arrangement of scales on its chin. I also took a close-up of the strange toe pads that allow it to run up and down almost any surface, even upside down. It turns out that the cellular structure of the toes harness the mysterious laws of molecular physics to allow it to do that. 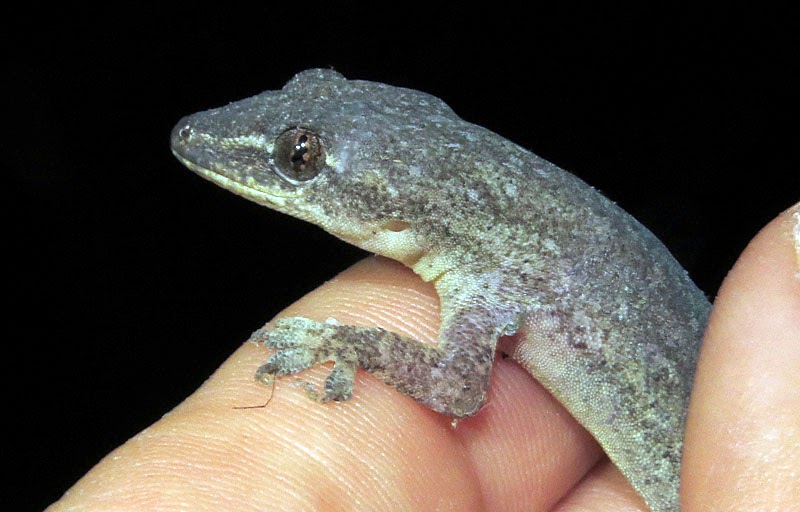 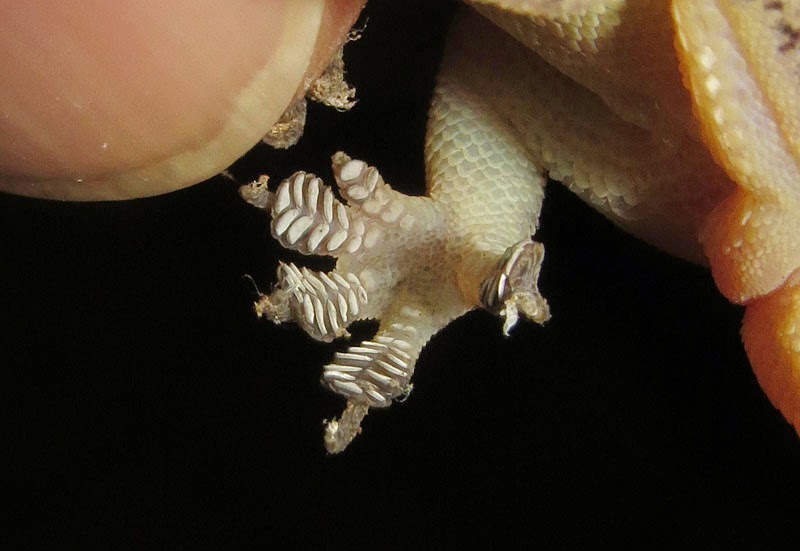 We took two short evening walks and one early morning walk for owls here. The first was successful for spotting a Kinkajou in an open Cecropia tree, and even better was this Ring-necked Coffee Snake, Nina sebae. We also heard a distant Vermiculated Screech-Owl and an even more distant Great Potoo. 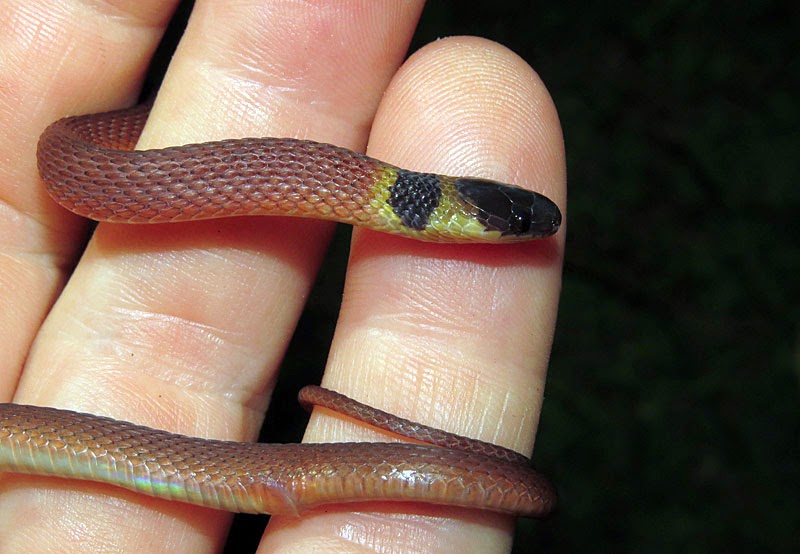 The second walk was utterly bird-free, but we were delighted by this Central American Woolly Opossum right over the trail. 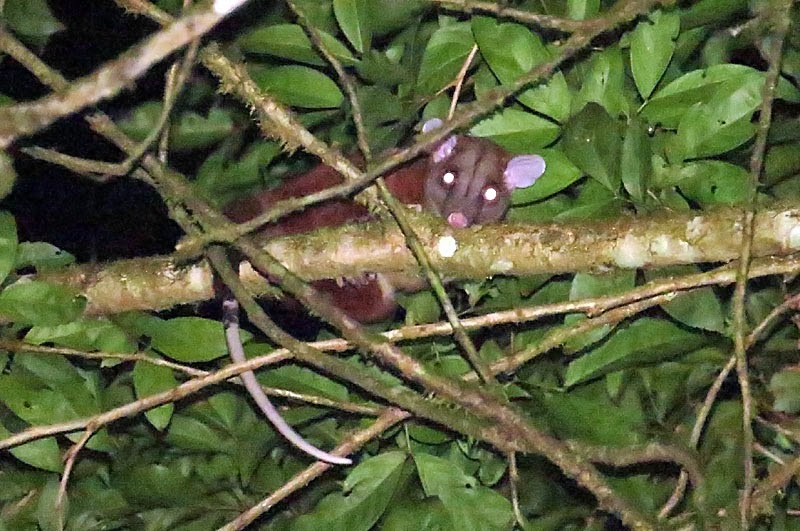 The final morning walk was at first also void of owls, and we called it quits just as it was getting light in order to have some coffee. Ricardo then heard a Spectacled Owl from the parking lot where we had been not 15 minutes earlier. It was rapidly getting light, but the owl was still responsive, and in about 10 minutes we were having great views of it very close to where we had seen the opossum the night before. 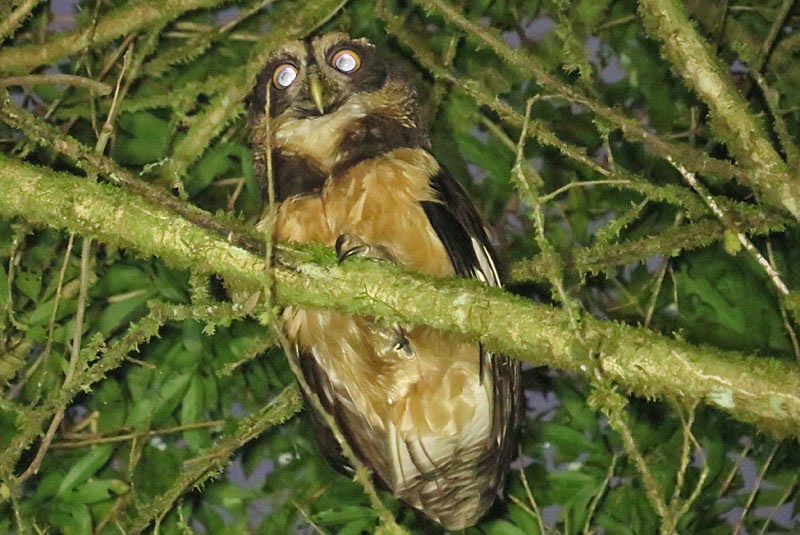 Posted by Birdernaturalist at 8:23 PM