The Culprit That Ate My Spearmint

When I got home from Brazil, I checked the jar in which I had put the three green caterpillars that had devoured my mint. One had only just begun spinning a cocoon just before I departed for Brazil, but they finished their metmorphosis and there were four dead adult moths in the jar. I swear I put only three caterpillars in there, but I must have miscounted.

Regarding the possible identity, boy, was I off. They are owlet moths, family Noctuidae. And the species appears to be Autographa californica, Alfalfa Looper Moth. Alfalfa and other legumes are common food plants for the caterpillars, but Bugguide does say that they are known to feed on "more than 50 genera of herbaceous plants and woody shrubs." Lepidoptera of the Pacific Northwest by Miller and Hammond says it's a pest in vegetable crops. I don't know if Mentha spicata is already known among them, but let this be the required documentation. 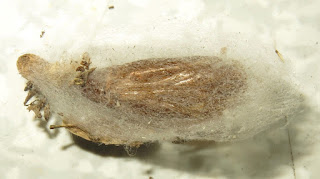 The only adult with the wings spread flat. It looks pretty worn, and I guess it fluttered around in the jar quite a bit, rubbing scales off in the process. 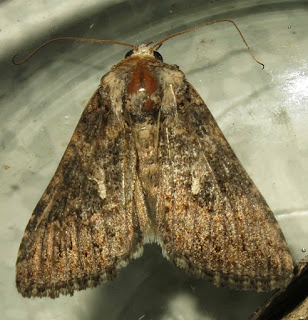 Posted by Birdernaturalist at 4:38 PM