The Master Plan for the Yard at Calliope Corner

I’ve often been asked what the plan is for my new yard, but knowing how plants are, I’ve tried to avoid making a firm plan. Some take, some don’t, unexpected problems crop up, and some surprising guests just appear.

In general, the plan has been to get rid of the lawn (you can see the progress in my last blog) and add more native plants. Which natives, and where to put them will be an ever-evolving plan. I had a few concrete ideas – such as to get some good hummingbird flowers, an idea I’ve been incubating for decades: Red-flowering Currant (Ribes sanguineum), Twinberry Honeysuckle (Lonicera involucrate), and one of the native Delphiniums were definite must-gets. In mid-February I jumped at the opportunity to buy some plants from Native Grounds, one of the several nurseries that grows native plants for the wholesale market. They don’t have stores or greenhouses you can browse – you have to know what you want and order in advance, and if you order fewer than 100 plants there’s a surcharge of up to 50%. My method was to look at their offerings online and order one of this, two of that, three of that, etc., and I ended up stopping by and picking up 40 pots of 14 different species. One problem is that I hadn’t finished covering all the lawn, and the existing perennial beds still were full of weeds and rank patches of last year’s growth. I had to create some order to figure out where I wanted to put all my new plants. So upon arrival I just put them in an out-of-the way spot, and there they sat for a few weeks. 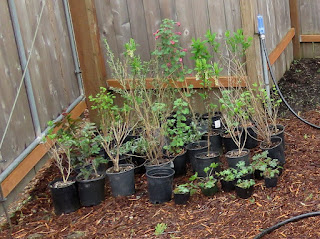 One of the bigger chores during the rest of February and March was to remove two clumps of bamboo. It can be a lovely structural addition to a yard if that’s your thing, but for my vision they were a complete waste of space and had already grown well beyond the bounds of the bed. The only wildlife that used it were the non-native House Sparrows for a night roost. I had received advice from someone to hire a professional remove them, but I managed over several days by hacking away at the shallow but extremely dense roots. I wouldn’t recommend it though and also suggest hiring a professional. 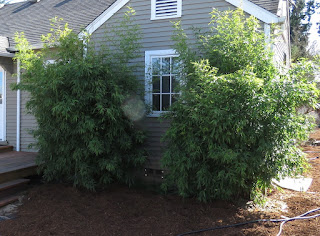 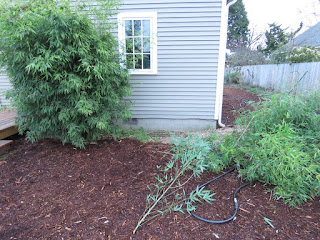 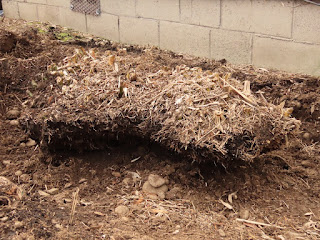 Then the very day that I finished cutting back all the perennials, removing the vast patches of invasive Geranium lucidum, and covering the beds with a layer of organic compost ­– March 26, 2020 – I started setting the pots of natives around the yard to see where they might fit. It was rather like musical chairs as I moved them around, looked at where they were, then started the music again and had them change places. I decided that some would be nice foundational accents, others would be nice in clusters. Some would grow into small trees, others would be shrubby, others very small ground covers. I put some of them into the ground right away, such as this Red-flowering Currant. 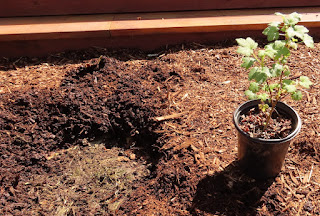 Most of the shrubby ones like this were rather root-bound, so I removed as much of the medium as possible with a spray of water to expose the roots. None were actually potted in soil but rather a loose, bark-heavy mulch, so putting them into the ground without cleaning that out this would have created a very weak central axis as the mulch would eventually decompose, leaving air pockets between the foundational roots. I made sure to mud them in well. 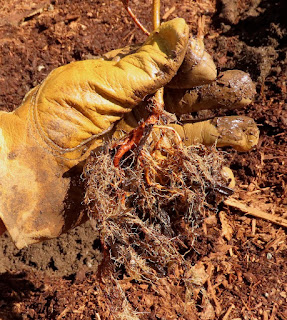 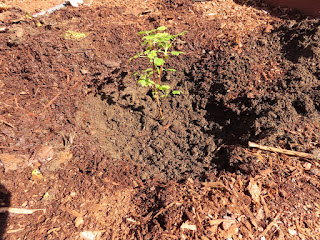 Before the bulk of them went in, though, I had further opportunities to acquire plants from other providers. My neighbors knew of another normally wholesale nursery southeast of Eugene, Trillium Nursery, and perusing their online offerings I bought another five species of 13 plants. And though the same neighbors I found that there’s a local landscaper and grower who specializes in useful plants, including some natives, and I got four more from him. Finally, two weeks after putting in the first ones, in all the rest– a grand total of 58 native plants.

So here’s where some things stand now: in the shadiest SW corner of the yard behind the shed were already some native bleeding heart (Dicentra formosa), and to that I added an Osoberry,  a Snowberry, and Stinging Nettle. Stinging Nettle is the host plant for Red Admiral, and the leaves make wonderful additions to soups. I suspect there are some other native insects that use the plant as well. 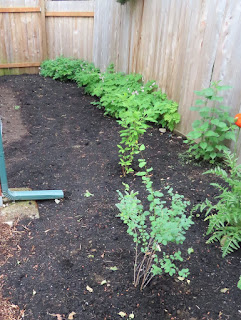 Near the walkway by the front of the house I created a cluster of three: Red-flowering Currant, Great Camas (Camassia leichtlinii), and Roemer’s Fescue (Festuca roemeri). 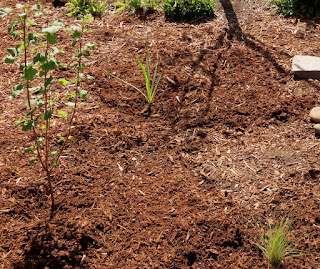 I was doubtful this Showy Milkweed (Asclepias speciosa) would appear, as the pot had just a squiggly root in it, but here it is, triumphantly just emerging in the previously established perennial bed. I’ll pick off any insects this year as it gets established, but in the future, it could potentially be food for Monarch caterpillars. 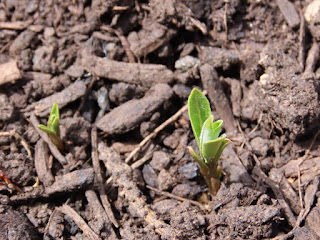 Coyotebush (Baccharis pilularis) is wonderful as a nectar plant and should tolerate the pretty dry, rocky soil on the west side of the driveway. I had wanted a male and a female, but it looks like from last year’s remaining phyllaries that I have two females. (Baccharis is an unusual genus in the Asteraceae in being dioecious). 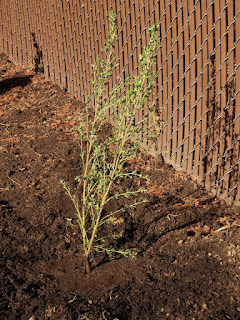 Another plant that should like these rocky, well-drained soils is Buckbrush (Ceanothus cuneatus), and this one quickly put on two flower spikes while still in the pot. When in full bloom, the bush will be covered in bees and other pollinators. 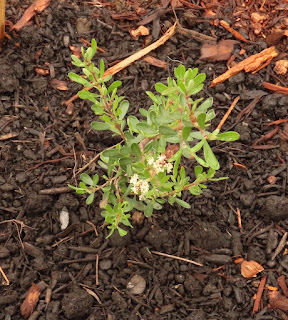 I’m excited that this Large-leaved Lupine (Lupinus polyphyllus) is putting on some flower spikes. I’m hoping there will be just enough water retention in the soil here to make this plant of the Willamette Valley prairie happy. 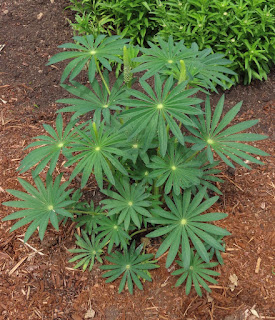 I put several of the plants in clusters in the middle of what used to be lawn. Maybe it will become something like a bit of shrubby prairie here. Here is an Oregon Grape (Berberis aquifolia), Buckbrush, Large-leaved Lupine, and a Twinberry Honeysuckle. 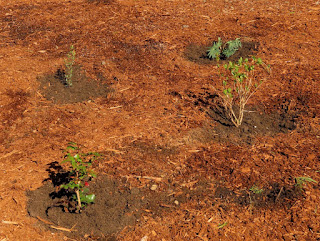 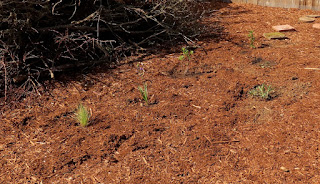 Finally, my friend Alan, who lives across town, asked if I wanted some Oregon Grape shrubs that he wanted to remove. I dug them up myself, and the same day he drove them over here, and I put two of them where the bamboo had been. 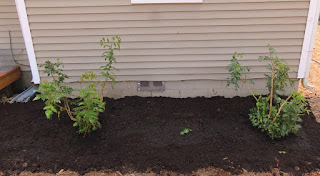 It’s been almost five weeks since these last ones were put in, and all plants are still alive, some growing by leaps and bounds. But things will change, and one of my hopes for this coming fall is to wander some wild areas, collect seed, and scatter them about the yard and see what thrives. It’s all so very exciting.
Posted by Birdernaturalist at 1:13 PM