On May 24, (yikes, already two weeks, ago!) I made my first real local outing for the year. I haven’t really been forced to hole up at home due to the pandemic for the past few months, though it seems that way. With a new house and yard (it’s been 9 months since I moved here, but it will still be “new” to me for at least a year more), I just have too much to do, and I’ve not really wanted to leave home. Birding in the yard during migration has been very exciting, and I’ve not wanted to leave for even a moment: going to the store seemed risky to me, not because I might catch (or pass on) the coronavirus, but rather for the chance that I might miss a new bird. But since migration had drastically toned down after mid-May, there wasn’t as great a danger of missing a new bird for the yard, and it wasn’t going to be a scorcher of a day (when the garden would need to be monitored for water). So I spent a full day biking to a new area for me.

The raised beds with hundreds of plants, mostly vegetables, of 50 different varieties, need watering almost daily if the temperature rises above 75°F. 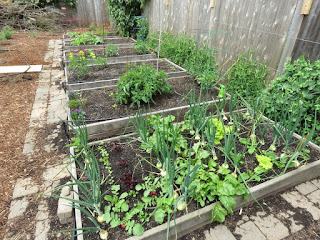 A few weeks earlier I had reached out to Neil Björklund, a local birder and butterflier, suggesting that I join him on one of his local butterfly forays, and this weekend he suggested Lowell Butte (which on maps is called Butte Disappointment, but apparently no one calls it that). I had already looked up that locality as one of the more adventuresome destinations I could reach by bicycle, and I decided I was up for it. It’s 27 miles one-way, which Google Maps suggested was two hours and 18 minutes from my house. It’s actually 2 hours and 35 minutes, at least with my speed and stops for photos. And a lovely ride, I might add. It’s upriver all the way, basically following the largest fork of the Willamette River, but the rise is very gradual, and I wasn’t too exhausted when I arrived. Here is where I crossed Fall Creek, a tributary that enters the Willamette from the north. 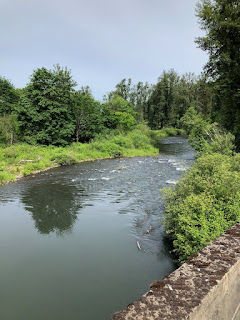 We agreed to meet at Lookout Point Dam, and the most uphill section of the road was just before this large dam. 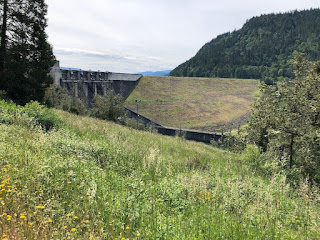 The view at the dam was surprising, with Diamond Peak looming in the distance. I beat Neil by three minutes.

Our main goal was to look for butterflies, and since Neil hadn’t been to this exact location before he wasn’t sure what we’d see, though he knew that Snowberry Checkerspots had been seen here recently by a birding acquaintance of ours. We ended up with exactly 20 species of butterflies, which isn’t bad for this early in the season. Here are the ones I photographed, more or less organized by family.

This is the only Clodius Parnassian, Parnassius clodius, we saw. I’m used to seeing these butterflies higher up, often in alpine situations. They are unusual in their host plant (bleeding heart) and in making a cocoon in the pupal stage (which we usually think of as something only moths do). 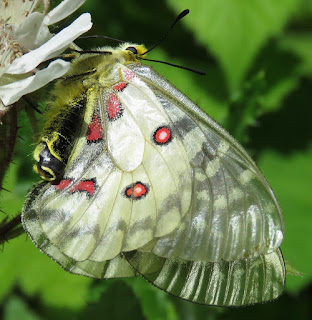 Julia Orangetip, Anthocharis julia, used to be considered the same species as Sara Orangtip, so this was an unexpected new species for me. They almost never sit still, so getting a good photo is very hard. 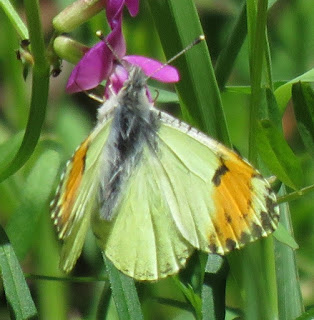 Oregon has a lot of confusing blues, and if you don’t good looks, you can’t always identify them. This Western Tailed-Blue, Cupido amyntula, is no exception, but with digital cameras we could look closely and see the tails, however small they were. 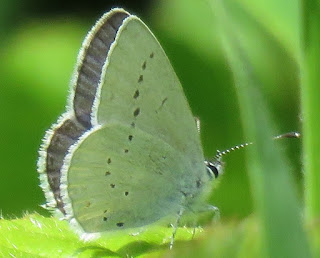 At one point, I told Neil that I’d like to find a hairstreak. I was about to continue, “Except…” when this Gray Hairstreak, Strymon melinus, flew in and landed right in front of me. This is the one hairstreak I didn’t really lust after – it’s kind of like the Painted Lady of hairstreaks in North America: everywhere. I have actually already seen this species in my Eugene yard several times, and I only have 5 species on my yard list. 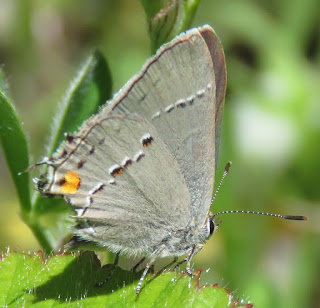 But it wasn’t much longer after that I spotted this Nelson’s Hairstreak, Callophrys gryneus nelsoni, currently a subspecies of the wildly polytypic Juniper Hairstreak. This one feeds on Incense Cedar (Calocedrus decurrens, not at all a cedar but actually a cypress, and therefore related to junipers). It looks nothing like the Juniper Hairstreaks I’ve seen elsewhere, so I’m happy to privately split this and consider it a lifer. 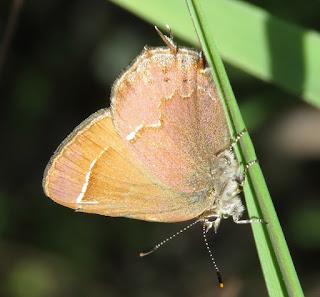 Our expected Snowberry Checkerspot, Euphydryas colon, finally showed well after it had warmed up. They are rather shy, so I used the zoom to its full extent. 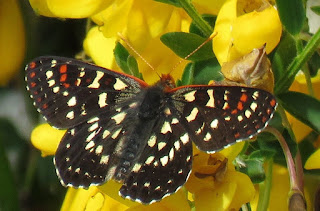 Along our hike, which turned out to be about eight miles, we took a slight accidental detour where we spotted our only Lorquin’s Admiral, Limenitis lorquini. I’ve planted two Oceanspray bushes at home, one of the host plants for this lovely butterfly. Fingers crossed I get some. 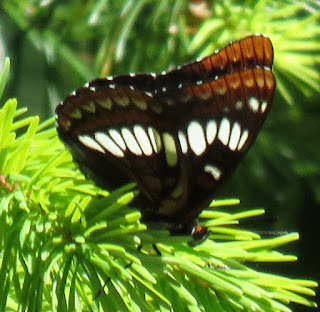 There are probably three possible duskywings here, a difficult genus. Every one we saw appeared to be Propertius Duskywing, Erynnis propertius. 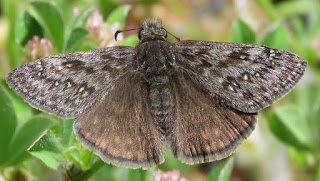 We saw several of these Two-banded Checkered-Skipper, Pyrgus ruralis, and as far as I can tell this was a new species for me. 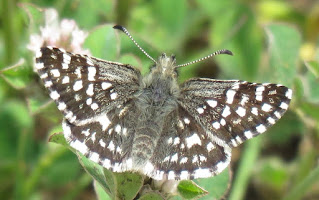 Arctic Skipper, Carterocephalus palaemon, a holarctic species known to our British friends as Chequered Skipper, and most certainly an exciting lifer. My friend Stephen Boddington had only a few days earlier seen one in Belgium. His blog: http://belgianbirding.blogspot.com/2020/05/back-to-business.html 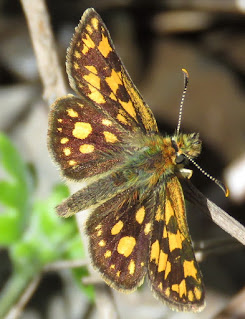 If you’re into butterflies, you should be in to plants, as their life histories are often closely tied. And even though these aren’t all hostplants for butterflies, there was lots to look at. Though it’s a rangy plant with only isolated clusters of flowers, this native Orange Honeysuckle, Lonicera ciliosa, is still nice, and I would consider trying to add it to my yard. 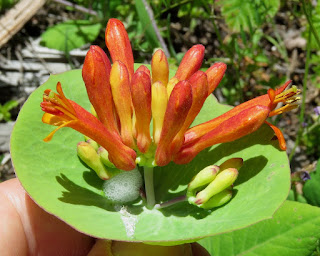 This is Stream Violet, Viola glabella, possibly a host plant for one of the fritillaries. 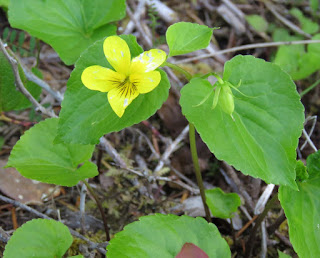 This Broad-leaved Stonecrop, Sedum spathulifolium, looks like the closely related Oregon Stonecrop, the host plant for Moss’s Hairstreak, but I’m not sure if they’ll use this one. 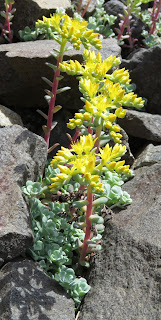 Oregon Checker-Mallow, Sidalcea oregana, is probably used by Painted Lady, but it might also be used by Common Checkered-Skipper. 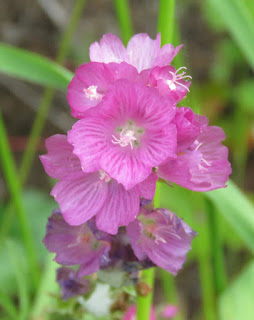 Other insects were also about: Eight-spotted Skimmer, Libellula forensis, which I spotted in my yard just a few days later. 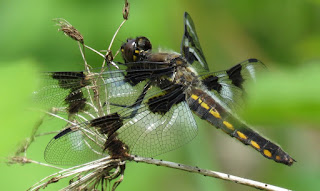 The Audouin’s Night-stalking Tiger Beetle, Omus audouini, is endemic to the Pacific Northwest, from southern British Columbia to northern California. 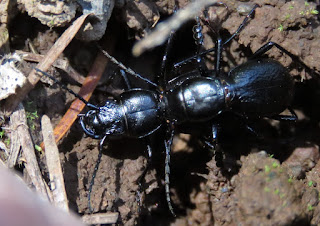 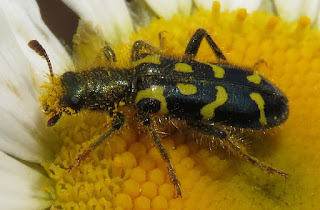 This really cool insect is a Snakefly, order Raphidioptera. I know nothing about them, except that they look like a strange lacewing. 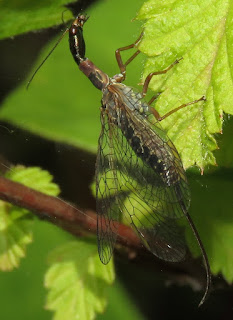 After 20 species of butterfly, some wonderful plants, and really cool insects, the most amazing find of the day came at the end when we were just about a hundred meters from the parking lot at the dam: I heard a commotion in the litter on the side of the road and was stunned to see a Ringneck Snake and Northwestern Gartersnake thrashing in a writhing ball. Before long I realized that the Ringneck had the garter in a death grip and was going to kill it with its venom. 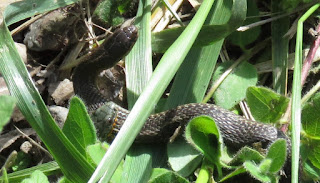 Ringnecks eat snakes and salamanders, and like many species in the subfamily Dipsadinae, have a toxin in their saliva that is lethal to their prey, even if only mildly irritating to humans. But since ringnecks never bite in defense, no one had ever reported what affect it does have on humans; and it was described only 13 years ago in a peer-reviewed paper that they are venomous at all. Their main defense is probably in their aposematic color. Red means poison almost universally, and it’s thought that they are toxic to eat. When you pick one up, they coil up their tail and show the very red underside. 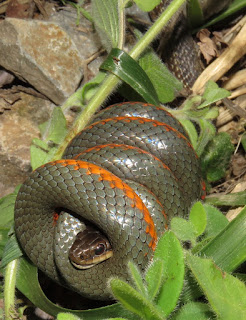 A lot of comments of my Facebook post and at iNaturalist were more focused on how large a prey the ringneck was attempting. The garter is about the same size, if maybe even a bit larger than the ringneck. But knowing how snakes can expand, I didn’t find this surprising at all. They’ll often eat things much larger in diameter than their own body. 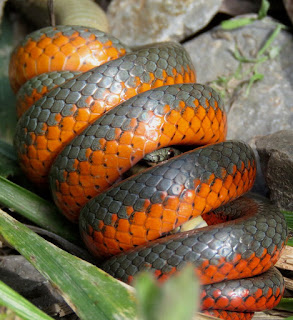