In late February Fiona Reid invited me to join one of her Sylvan Falls Bioblitz Weeks in Costa Rica. If you haven’t heard of her, Fiona is an accomplished mammalogist, artist, author, and tour leader. Her mammal field guides are the best. She’s also a birder and as much into herps and moths as I am. Sylvan Falls is her new property near the town of Rio Claro, which is close to Golfito in the southern Pacific region. She created these four bioblitz weeks, inviting many of her former clients (all of whom have a wide interest in natural history, some more into birds, others more into mammals) to take part while joining well-known biologists and guides (among which I was honored to have been included) to help Fiona learn more about the wildlife on her amazing little piece of heaven. It’s really a gorgeous spot with incredible biodiversity. The permanent stream has dozens of waterfalls along its length, and we hiked to at least three of them. 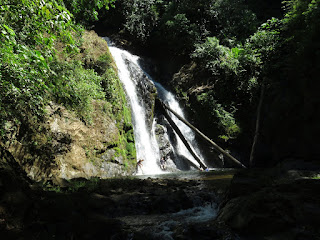 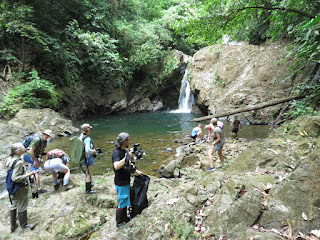 The original “house” is an open-air structure to which Fiona and her small staff (sorry no photo of these amazing people) have already made many large improvements – enough to host a group of 10 of us sharing rooms. We also had wonderfully delicious and nearly all vegetarian meals prepared by her cook, prepared in a small kitchen with no refrigerator. 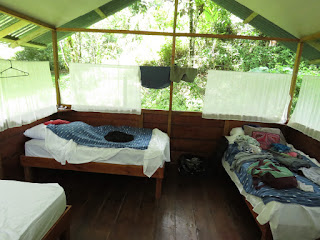 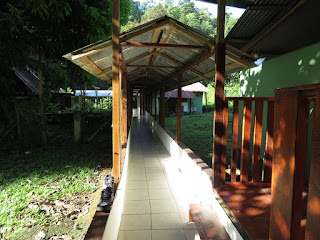 This small river runs along one side of the property, and you have to cross it a couple times to arrive here. 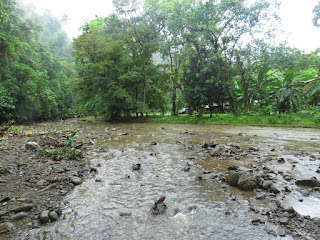 The area is very hilly, and one trail climbs right above the property. This one hillside was logged long ago and may be a future site of some eco-friendly houses if Fiona can find some interested parties. Just up the hill is some very nice forest. 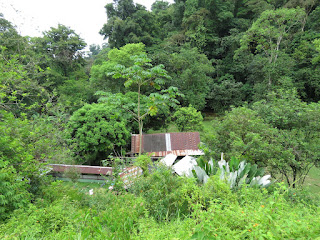 This February week was the final of Fiona’s four bioblitz weeks that began in December, one of which was devoted to just bats – and they recorded over 50 species, which is simply incredible. Tallying up the entries in iNaturalist and eBird, I figure that her weeks have recorded nearly 700 species of life on her property in those four bioblitzes, and that’s not counting any trees and very few plants – and taking frequent dips in the river as well. Our group recorded well over 400 species in just that week in February. It was an amazing time with a group of great people. I culled my own output to 890 photos, representing over 200 species of plants and animals, and that includes just a handful of the 150 species of birds I recorded there (all of which are on eBird). My personal goal was to get to know the odonata better, and I succeeded very well here. I came prepared with my net (thanks Frank and Betty!) and documented 26 species, with no small thanks to a bunch of Facebook users and Dennis Paulson, who is publishing a book on Costa Rican odonata with Bill Haber. Here is a sampling of the ones I found.

Most of my photos look like this Epigomphus quadracies, Campanella Knobtail – that is, in the hand to get good photos of the field marks for ID. I let them all go, as I did not have permission (or equipment) to take specimens. (By the way, we have Dennis Paulson to thank for many of the English names that he, and others, have given to North American odonates. Once you cross the border from Panama into Colombia though, you’ll start finding many species found only in South America, and no one has compiled such a list for there yet.)

I was amazed by how many species of dancer were here, some of which I’d never heard of before, such as this Argia pocomana, Pocomana Dancer. This is one of six dancers I found, and most look like this. There should be two or more species here that I missed. 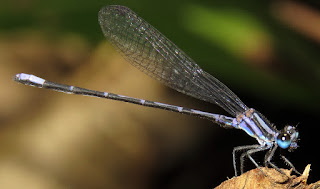 Argia cupraurea, Ruby Dancer, stands out amongst the rest with these amazing eyes and glittering thorax (though there are similar looking species elsewhere). 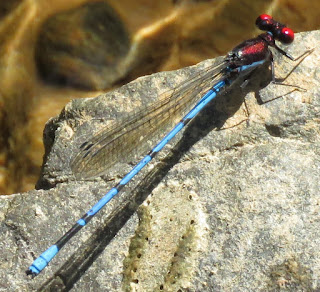 There were at least two different rubyspots here, this one being Hetaerina occisa, Racket-tipped Rubyspot. This one is a female, which you can tell by the ovipositor on the underside of the abdomen tip. 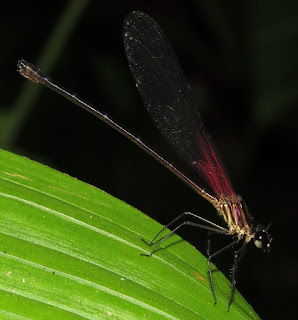 Another attractive damselfly that was common in sunny stretches with shallow water and grassy vegetation was Heteragrion erythrogastrum, Red-and-black Flatwing. 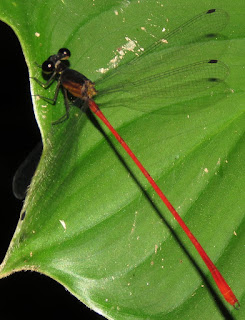 What may remain a mystery for a while is this Palaemnema sp., a shadowdamsel. Fiona actually hosted Bill Haber last year, and he and subsequent bioblitzers also found it here. So it’s obviously not rare on the property, but this genus is very poorly known with many very small and isolated populations. This is either a little-known Panamanian species new for Costa Rica or a new, undescribed species. 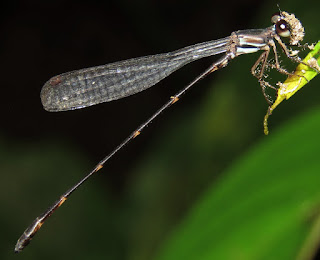 The most diverse group of odonates here were the dragonflies in the family Libellulidae. I had photographed this Cannaphila insularis, Gray-waisted Skimmer at least four times before in Costa Rica but also just last year in Texas. 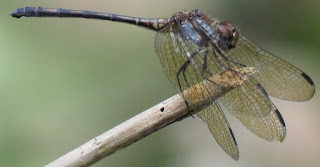 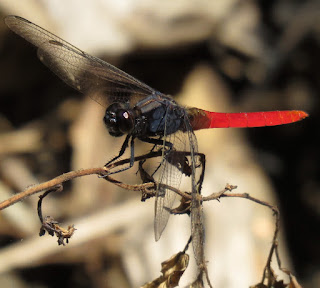 And the most diverse group of libellulids here are the dragonlets. I only photographed three species, such as this Erythrodiplax fusca, Red-faced Dragonlet, by far the most abundant, but there are surely several more. 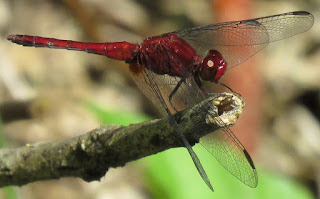 Posted by Birdernaturalist at 10:09 AM