March 21, 2010
This is the tour's last day of birding, and it was spectacular – lots of species and many of high quality. It was also an interesting day for habitat, plants, and butterflies.

We began the morning at the reservoir above Teotitlan del Valle, the town famous for its rug market. The reservoir was birdy, with Least Grebes, Ruddy and Ring-necked Ducks, Least Sandpipers, and a single American Pipit.

A couple miles up the road the pastures and farm fields end, and the natural tropical deciduous scrub begins. We saw Dwarf and Golden Vireos here, heard Ocellated Thrasher, and had great views of a Blue Mockingbird perched in a spot that it assumed was out of sight.

I stopped to admire this composite, and recognized it as one I had seen in Oaxaca before. Judging from the shape and smell of the leaves, it is at least closely related to marigolds (if not in the same genus), but the arrangement of flower heads is striking. A typical marigold "flower" is actually a head composed of many flowers of two kinds – several ray flowers around the outside, each with one strap-shaped petal; and many disc flowers bunched together in the center, each with a regular five-petaled, tubular corolla. At first glance, this plant looks no different, but look again. This is not just one head with two flower kinds – it is actually six individual, many-flowered heads bunched up together at the end of a stem. What's amazing is that they arranged so that the effect is that of one normal composite head. There are five heads around a central head. While the central head has no ray flowers at all, the five radial heads each have just two ray flowers, and those are placed on the side of the head away from the central head. Creative, no? 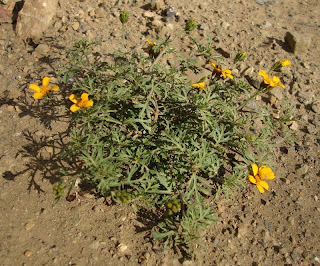 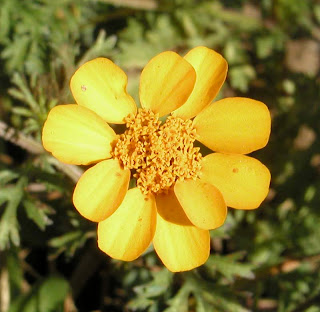 A little higher up, we entered a rich oak forest with a mix of pines in the shadier draws. 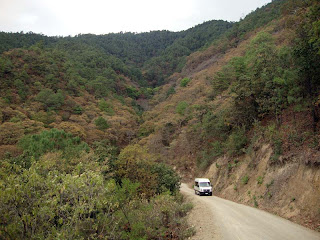 This orchid, Aulosepalum pyramidale, was growing in a colony on top of a boulder. Thanks to Gerardo Salazar for the ID.

I paused to enjoy this Mexican Dartwhite, Catasticta nimbice, while dropping back from the group for a minute.

A little farther up the road we stopped the van for all to admire this rat-tail cactus, Disocactus martianus. Thanks go to Jerónimo Reyes for the ID. 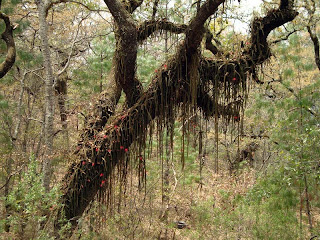 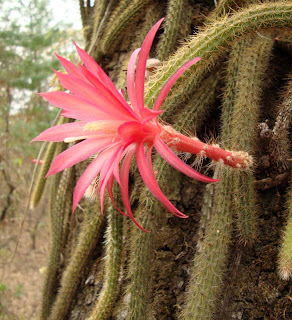 Despite being an unscheduled, non-bird-related stop, this ended up being one of our best birding places of the trip. A huge mixed flock descended upon us, with many warblers, vireos, and our only White-breasted Nuthatch, Bridled Titmouse, Black-throated Gray Warbler, and White-striped Woodcreeper.

Finally, we reached the ridge at the small village of Benito Juarez. One of the distinctive trees at this elevation (about 9500 feet) is the southernmost true fir, Sacred Fir, Abies religiosa.

A lot of species of plants, animals, and birds can be found in this zone that never occur in the dry valley visible below. This is a view of Benito Juarez.

Geoff and Sheila found this lovely orchid-like flower. I recognized it as a member of the family Lentibulariaceae. A little google searching found that is is likely Pinguicula moranensis. Its leaf rosette appears to be the winter/dry season form. In the warmer, rainy summer they develop large, fleshy leaves. 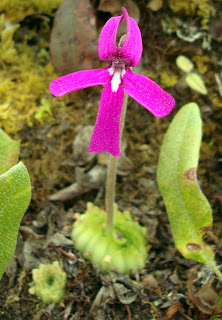 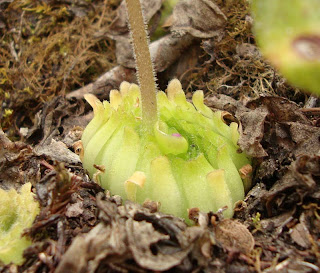 This is a tiny shrubby Potentilla. 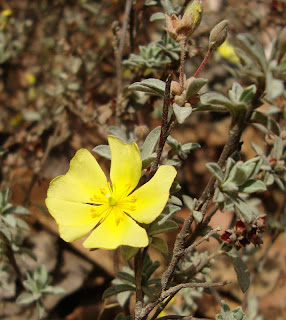 This is in the genus Eryngium, which also occurs in southeastern Arizona. I remember first seeing this genus and thinking that it must be a composite and not getting anywhere with the floral key. It took me quite a while before I realized that it was a member of the carrot family. 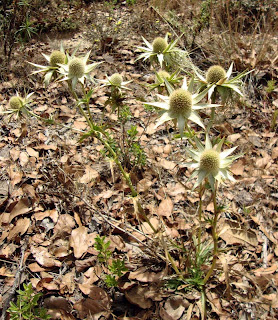 This definitely a composite, one I would love to key out, were there a key to the Asteraceae of Oaxaca. I thought it reminded me of Achillea. 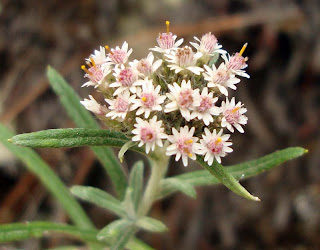 On the way back down, we stopped again in the dry scrub of the lower foothills to try again for the elusive Ocellated Thrasher. We ended up hearing one sing, but it would not reveal itself. It wasn't a dead, hot afternoon, though. We saw a Dwarf Vireo, two Golden Vireos and a group of West Mexican Chachalacas in the search. And in the warm afternoon sun, butterflies were active on a flowering shrub in the draw.

I hope to return here some day during the rainy season and compare this dry Selaginella plant to the lush, green ones that result just a day or so after a good rain. 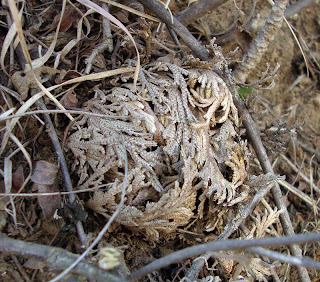 This tree is another composite I would have loved to key out, given a flora of Oaxaca. Few members of Asteraceae here reach such a grand size. 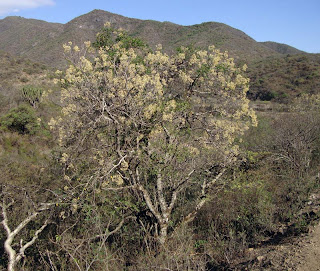 Posted by Birdernaturalist at 11:43 PM