It might surprise a lot of people that we have butterflies in the winter here in Southeastern Arizona. If it's sunny and warm enough there are several species that will come out of "hibernation" almost any month. But I was still surprised week before last to see this Pipevine Swallowtail at Peña Blanca Lake, the first one I've ever seen in the month of January. Early March is more typical for the first sighting of the year for me. 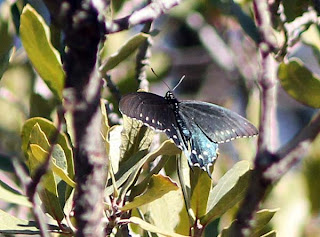 This West Coast Lady has a territory it defends on exactly the same clump of dirt in my north-central Tucson driveway every day, and it's been there since at least mid-January, 3 weeks now. 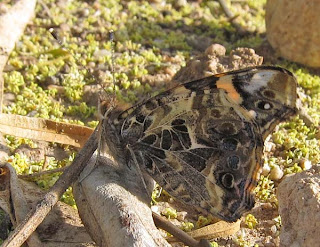 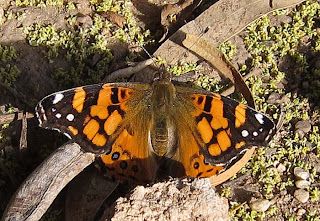 It was actually on January 24, 1997 in Sycamore Canyon near the Mexican border when I started looking at butterflies. I was about 4 miles north of the Mexican border when I spotted this gorgeous blue butterfly with white spots near the tips. I thought that such a thing would be really easy to look up. Little did I know that it was one of few records of Blackened Bluewing for the United States at the time! No wonder I had a hard time finding it in the books. Here's a link to a nice photo at Flickr:
http://farm4.staticflickr.com/3436/3391566758_5c28dc14f7.jpg
Posted by Birdernaturalist at 10:59 AM