Oh gosh, yes, here’s another mountain top that takes my breath away. Aldrich Mountain is yet another place that I can take my WINGS tours to Oregon only if the road is open, usually after mid-May, but sometimes not until much later after winters of heavy snowfall. I created this panoramic from a series of photos just a week ago on the last day of my Oregon tour for a group from the Venice Area Birding Association. Click on it to see a much larger version. It’s a spectacular view.

The Aldrich Mountains are a netherworld between the Ochocos and the Blue Mountains, west of the Strawberry Range, south of the John Day River, and east of the South Fork John Day. Many native Oregonians have never been here and have no idea where it is. You must go.

A huge forest fire obliterated much of the rich coniferous forests in the fall of 2006, but the resulting wildflowers (here mostly Fireweed and Pearly Everlasting) are amazing. 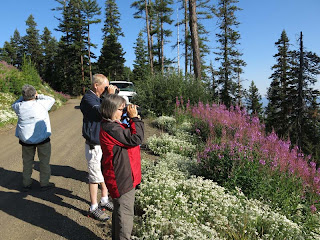 As you get close to the top, Scarlet Gilia (here in an interesting frosty pink variety) are common. 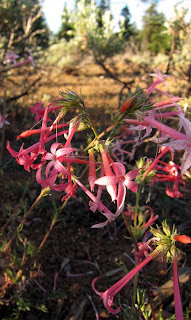 Last year I took a picture of this curious, big-eyed fly at the very peak of Aldrich Mountain and subsequently got the attention of some evolutionary biologists who have been looking at the genetics of botflies and their hosts. They weren’t positive, but this appears to be a hilltopping male Cuterebra polita, a parasite of pocket-gophers, the one species that was missing from their analysis and one that had never been photographed in the wild before. I was sorry I hadn’t collected it, but that’s a different kind of trip. (It turns out the female botflies – after mating with the males they find on isolated hilltops like this – lay their eggs on rootlets of plants at the burrow entrances of the woodrats. The eggs then hatch when they sense the heat, and the larvae subsequently burrow into the woodrat. The upshot of the study was that our diverse botflies here evolved earlier than the ones that specialize on internal surfaces of Old World mammals such as horses and elephants.) 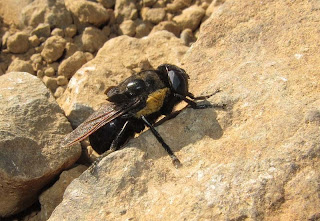 OK, most people might be grossed out (while my friend Kate certainly wants more), so I’ll end with a super cool beetle, also one I found last year (on my hat), Priacma serrata. It’s not rare but is found only in the coniferous forests of NW North America and belongs to this obscure family called Cupedidae. While many beetle families contain hundreds or thousands of species, this one has only 30 worldwide, just four in North America. How cool is that? 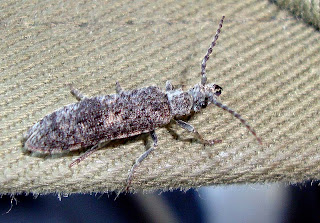 Posted by Birdernaturalist at 11:28 PM