Pinal Mountains During The Day 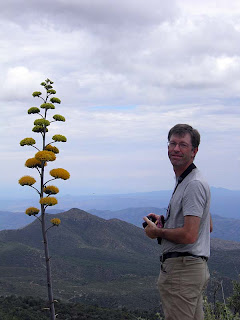 A few posts ago I shared a series of moth and other bug photos from the sheet that my friend Margarethe hung at our campsite in the Pinal Mountains south of Globe, Arizona in mid-July. We also did some productive birding and bugging during the afternoon of our arrival, as well as the following morning.

The habitat is extremely varied near the top of the Pinals due to a turbulent fire history as well as the differences in soil and exposure. A few miles from the top the road traverses the south-facing slope covered in a dense chaparral, and plants normally from much lower elevations rise to near the peak. Margarethe took the photo of me at the top by a large stand of Agave chrysantha, Golden-flowered Agave. These agaves were being worked over by many Rufous/Allen’s Hummingbirds (in all likelihood Rufous, but you can’t tell in this plumage), and it was on this warmer side where we had most of the bugs.

One of the most interesting was this Thistledown Velvet-ant, Dasymutilla glorisa. This is actually a wingless female wasp, and some species are known to have a very powerful sting. 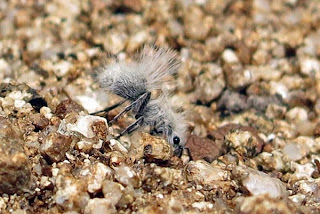 A Meridian Duskywing was one of few leps active on this mostly overcast day. 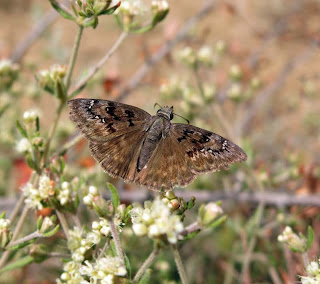 This is Dipalta serpentina, the Serpentine Bee Fly. I like bee flies because they have distinctive patterns on the wings and body that are usually visible and easy to photograph. All we need now is a field guide to the bee flies. 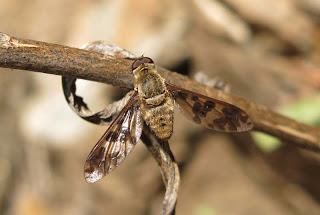 Very large plants of the lovely Wyoming Indian Paintbrush, Castilleja linariifolia were in full bloom in a couple spots. (Thanks to Mark Egger for confirming the ID.) 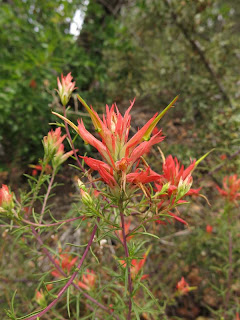 We worked our way even higher to an area just barely on the N slope where there was a taller and moister forest, but what was presumably an old burn had created a nice thicket of Ceanothus fendleri, still with lots of flowers. 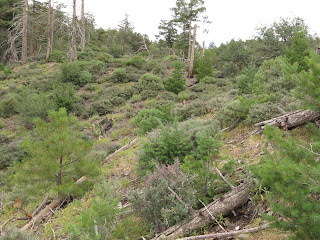 If it had been warm and sunny we surely would have seen a lot more stuff, but it was still pretty good. This beetle is probably in the genus Attalus, in the odd family Melyridae, the soft-winged flower beetles. 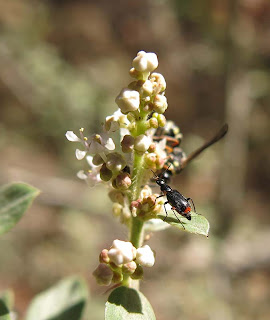 There were a lot of these colorful case-bearing leaf beetles, Urodera dilaticollis. Notice how much smaller the male is than the female. 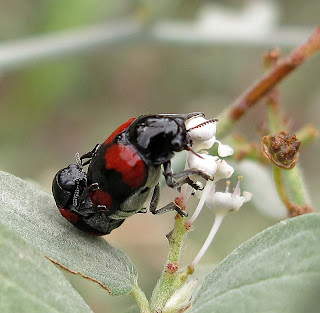 Though lep diversity was low, numbers of Southwestern Azures were everywhere. Here’s one overshadowed by a handsome Taxiles Skipper, Poanes taxiles. 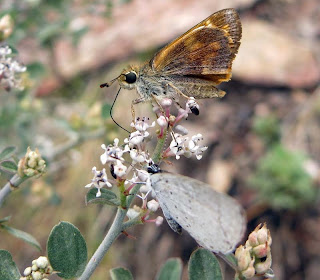 This ant, probably a carpenter ant, genus Camponotus, is probably getting a sweet honeydew exudate from this caterpillar, almost certainly that of a Southwestern Azure, Celastrina echo cinerea. In turn the caterpillar presumably gets some protection. 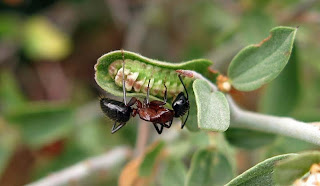 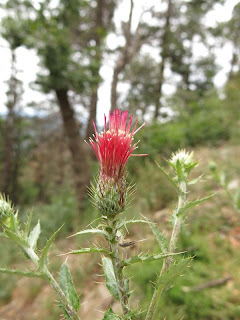 But maybe it was just too cool, having been overcast all day, as this Nais Metalmark, Apodemia nais, was trying to get warm in a patch of sunlight. 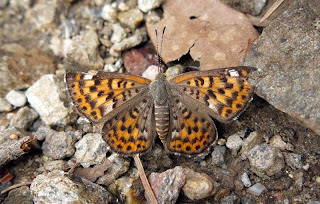 I managed to bring in a very large flock of warblers, tanagers, nuthatches, Yellow-eyed Juncos, and Black-chinned Sparrows with my pishing and pygmy-owl imitations. Some of the birds, all apparently locally breeding birds, came in quite close, such as this Blue-gray Gnatcatcher. 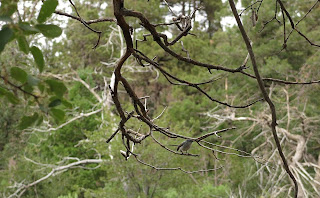 We drove to the very top of Pinal Peak, not expecting to see much other than a fantastic view. But we were surprised by the incredible numbers of Convergent Lady Beetles, Hippodamia convergens. They were in the low vegetation all around the buildings and antennae at the peak. 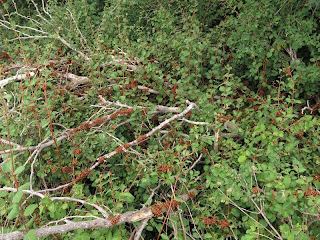 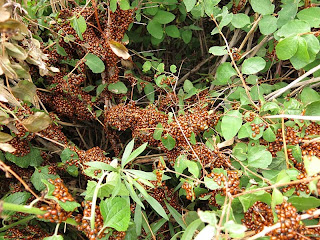 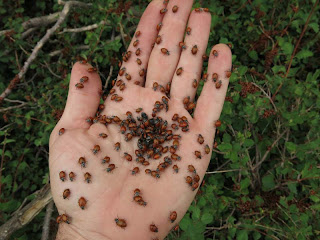 And despite the cool weather, a Greater Short-horned Lizard, Phrynosoma hernandesi, was active. 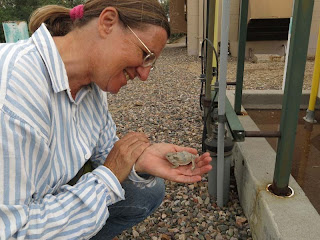 On the morning after buglighting we awoke to a beautiful dawn in the oak-chaparral area where Spotted Towhees dominated the dawn chorus. Most other species weren’t singing much at this late date. 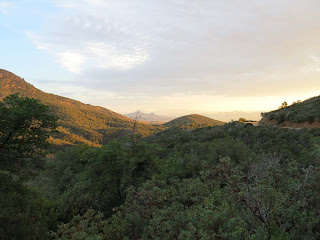 We birded and looked for insects just up from our camping spot where the canyon narrows and a moister pine-oak forest dominates, with Arizona Sycamores, Arizona Walnut, and even a stand of some very large Arizona Alders along the canyon bottom. Hairy Woodpecker, Painted Redstart, and Red-faced, Grace’s, and Olive Warblers were among the birds we found here, but a Sulphur-bellied Flycatcher was a nice surprise and a first record for the Pinals. 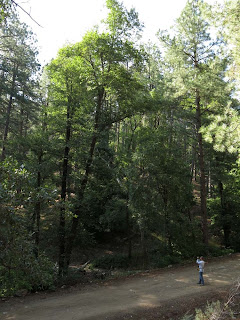 There wasn’t time for much botanizing, but I did have to pause to figure out this holly-like bush, Rhamnus ilicifolia, Hollyleaf Redberry. It’s in the same family as ceanothus but even more closely related to the Cascara of my native Pacific Northwest; I don’t know if it has the same laxative in the bark, as we didn’t try to roast hotdogs or marshmallows using the branches. 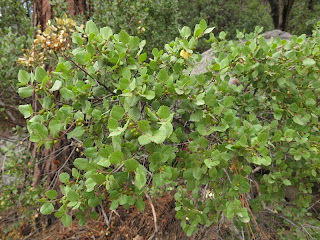 Posted by Birdernaturalist at 11:22 AM