This past late April I took four days off of my usual busy work at home to have fun in the field with friends visiting from out of state.  First came Anthony Collerton of New York (and a very avid Long Island birder), whom I first met 12 years ago on a tour to Bolivia. He was in the state for a meeting and tagged on some days to look for some of our special birds.

After rather quickly finding the Rufous-capped Warbler pair in Florida Canyon (and coincidentally bumping into our friends Ken and Sue Feustel also from Long Island), we continued to look for the Sinaloa Wren by Tubac. By then it was mid-day, and in about two hours we heard and saw lots of birds but no target bird. A pair of Common Ravens were nesting near here, and I snapped this shot just as the wind blew the neck feathers of this member of the pair. Pitfall for the unwary: Common Ravens also have very pale bases to the neck feathers; it may be a bit more extensive or even whiter in Chihuahuan Raven, but it’s not a reliable field mark. Look at the size and proportion of the bill and nasal bristles instead. Or listen to the voice. Or leave them unidentified as “raven sp.” 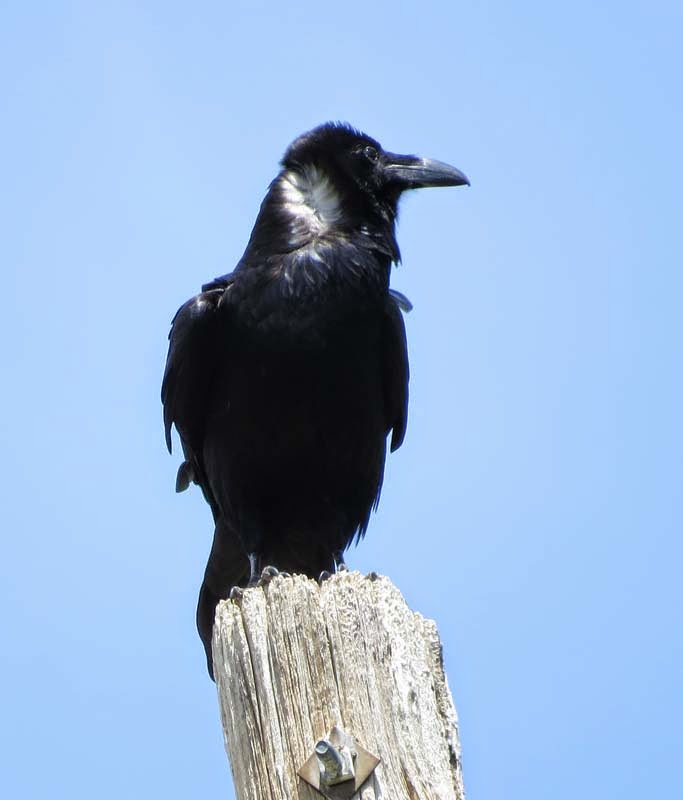 There weren’t many insects around, but I did find this Plateau Spreadwing, Lestes alacer while waiting for the wren. 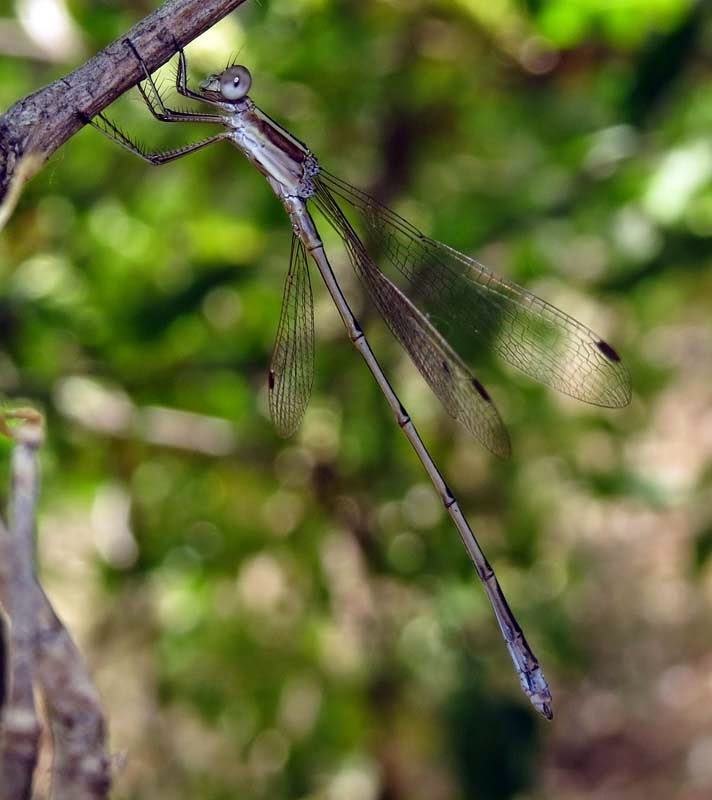 We finally decided to cut our losses here and try for the other wren – an hour and a half away on Fort Huachuca. It didn’t take long before I spotted this very sneaky Sinaloa Wren feeding in the dense streamside habitat. The first US record of this species was less than six years ago in Patagonia, while one was found in this same location the following spring, five years ago this month. This one was discovered last fall, but was said to be a juvenile bird, which would make it a different individual. I'm not sure how it was aged, however, and it seems a mighty strange coincidence to have the 2nd and 4th US records in exactly the same spot. 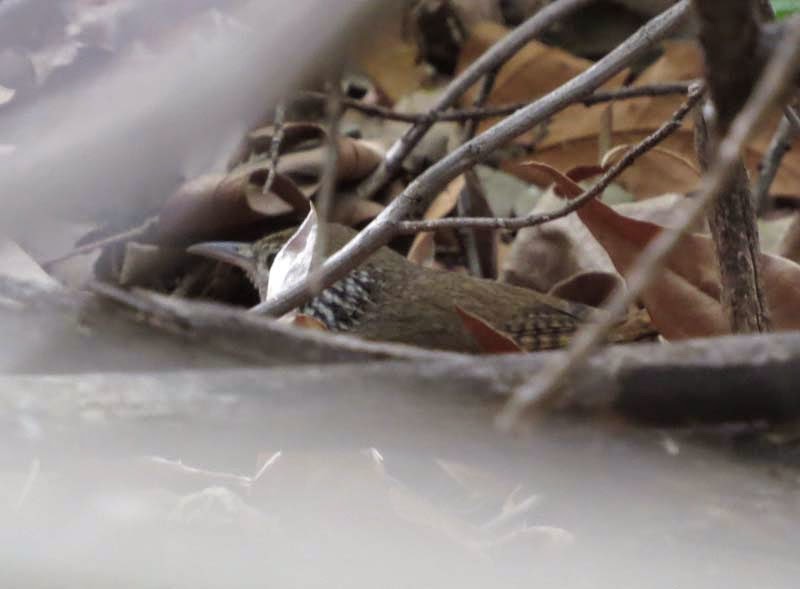 The bird wasn’t at all shy, once foraging just a meter from my feet and ignoring my movements and sound while trying to get other birders on it. But it moved steadily through the thickets, not making much sound, and was soon nearly invisible and impossible to follow once it was in the thickest areas of the shrubbery. 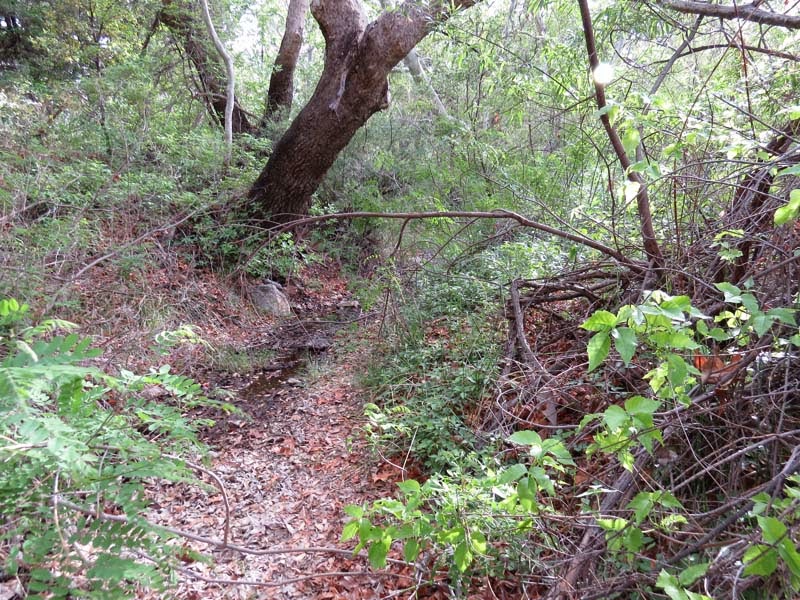 The next day, Anthony and I decided to try for the Slate-throated Redstart found the previous day in South Fork Cave Creek in the Chiricahuas by Chris Charlesworth. This would be a new ABA-area bird for both of us, and being the third record in the US this spring was clearly part of a unprecedented pattern. (There have since been two more found in the Chiricahuas, but neither seems to want to stay more than a day or two.)

We hiked the ½ mile or so through some gorgeous habitat. 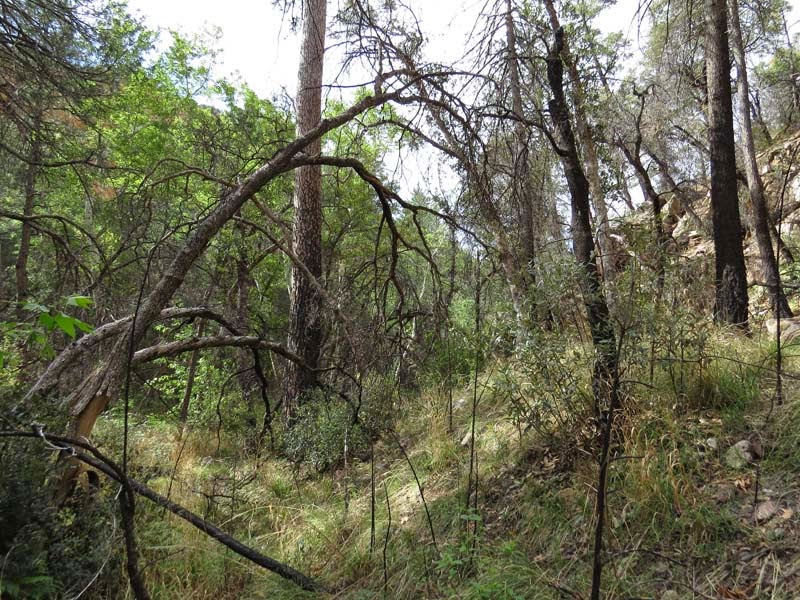 We met many birders from out of state who were clueless about the Slate-throated Redstart report and were just as eager to see the comparatively abundant Elegant Trogon. Many of them missed the trogon, while we found ourselves seeing a pair again and again, almost tiring of this tropical gem. Shoo! 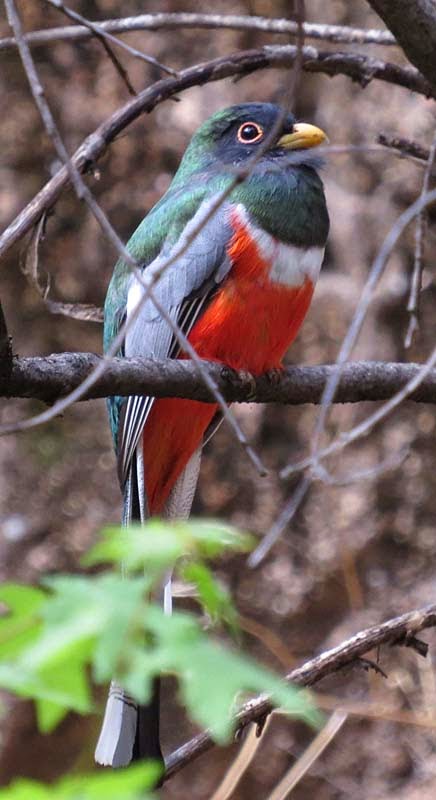 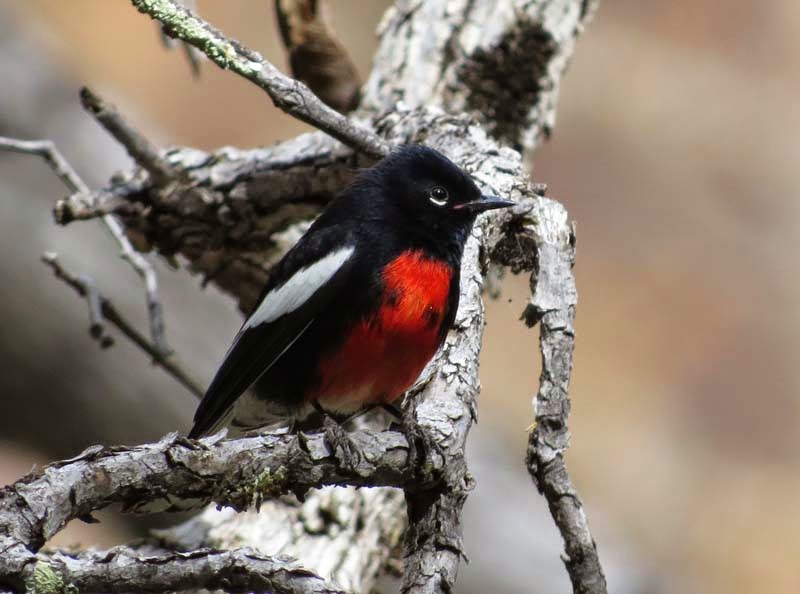 During the several hours we spent walking back and forth along a half mile of the canyon, I took time to look at some bugs. This bee fly is in the diverse genus Hemipenthes, and I can’t tell whether this one is H. scylla or H. sinuosa – or perhaps another more obscure species. 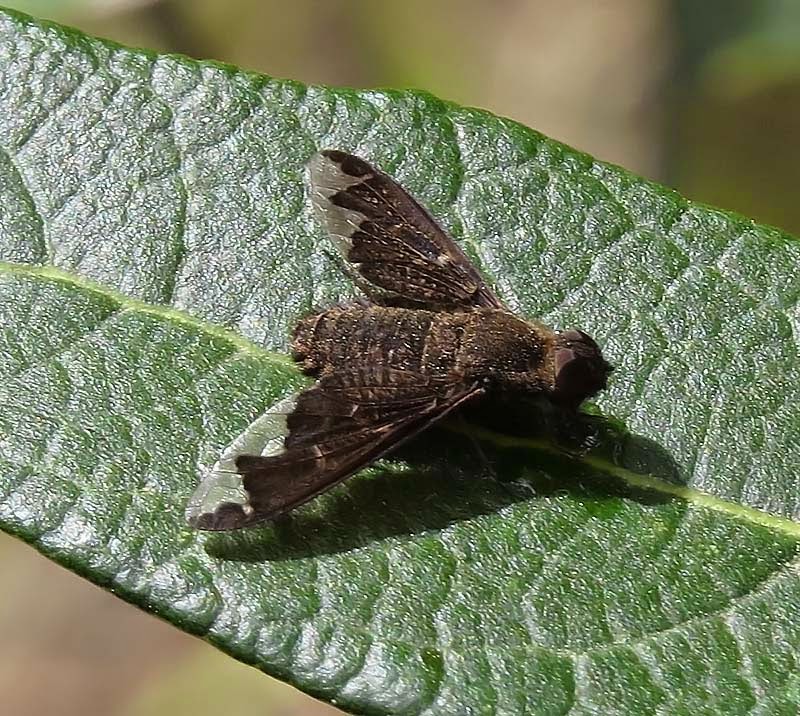 Pacuvius Duskywings, Erynnis pacuvius were here and there along the trail. Generally the duskywings are really hard to identify, but this one is more compact and has a more variegated pattern than most. 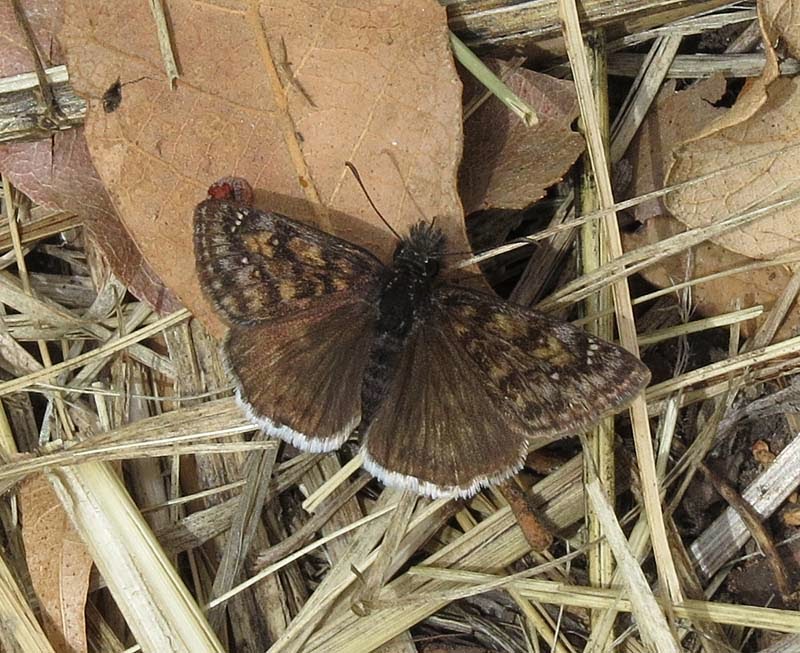 The huge Silver-spotted Skipper, Epargyreus clarus is easy to identify; nothing looks like it in Arizona, even if you can’t see the huge white slash on the underside of the hind wing. 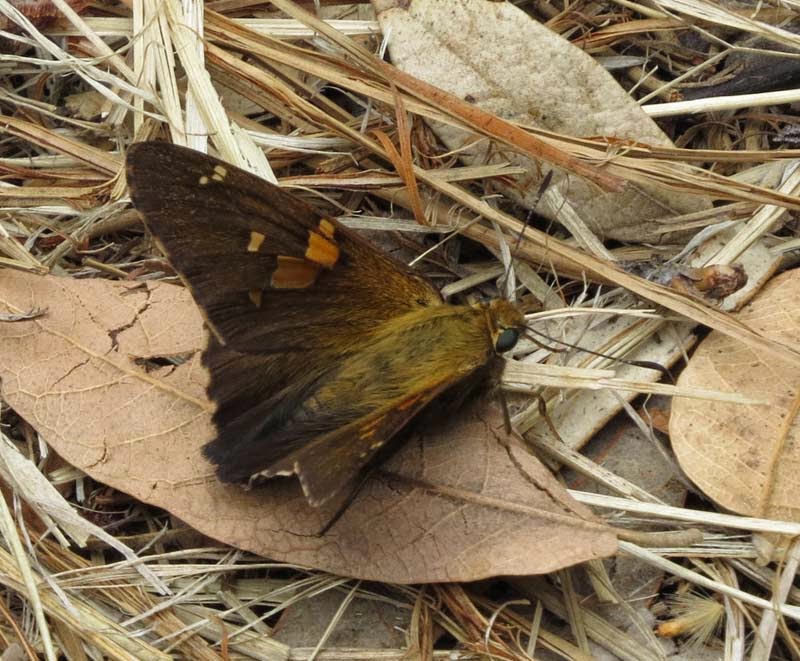 Alpine Cancer-root, Conopholis alpina is a horrible sounding name for this parasitic plant, related to Indian paintbrush, but I suppose someone thought it’s better than boomrape. 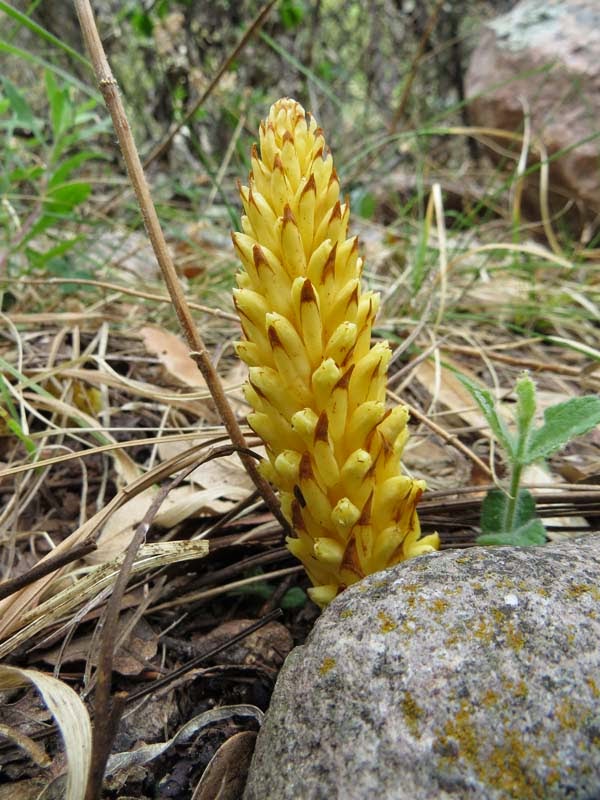 By far our best finds along this trail were the snakes: I spotted this Black-tailed Rattlesnake, Crotalus molossus before it noticed us, but it was very quick to take up a defensive posture and begin rattling. 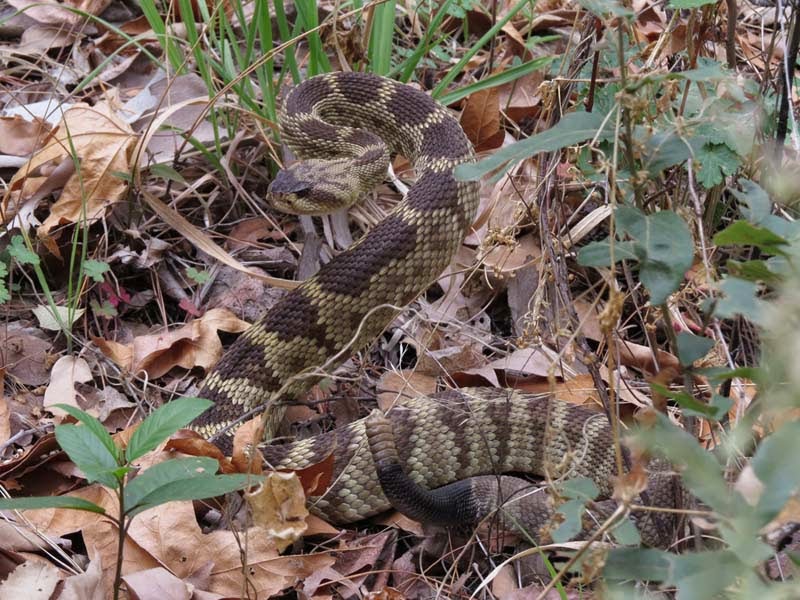 And right in the middle of the trail was this gorgeous Sonoran Mountain Kingsnake, Lampropeltis pyromelana, perhaps only the 4th or 5th one I’ve ever found. 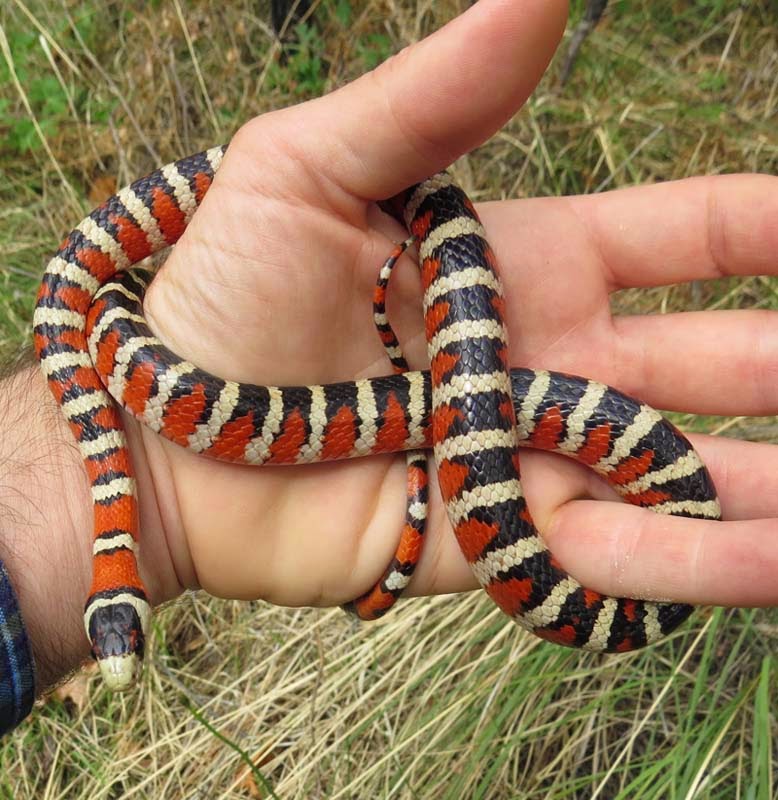 After giving up on the Slate-throated Redstart (which was never seen again), we went to the highest elevations of the Chiricahuas, hoping for Short-tailed Hawk, but the wind from an approaching cold front was unbelievable. It was sustained around 30 or 40 mph, with gusts over 60.

So I enjoyed the flowers, such as this New Mexico Lupine, Lupinus neomexicanus 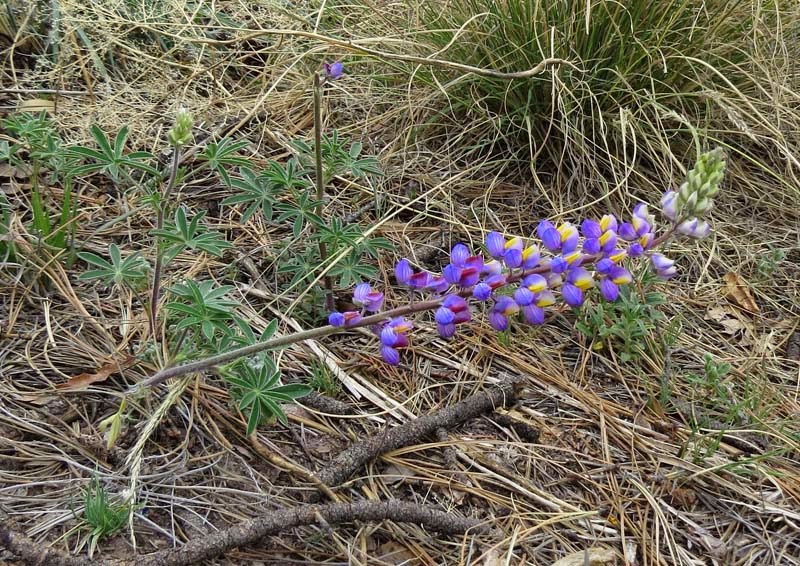 And this Scrambled Eggs, Corydalis aurea. I began botanizing knowing this as a member of the bleeding heart family, Fumariacaea; this has now been subsumed into the poppy family, Papaveraceae. 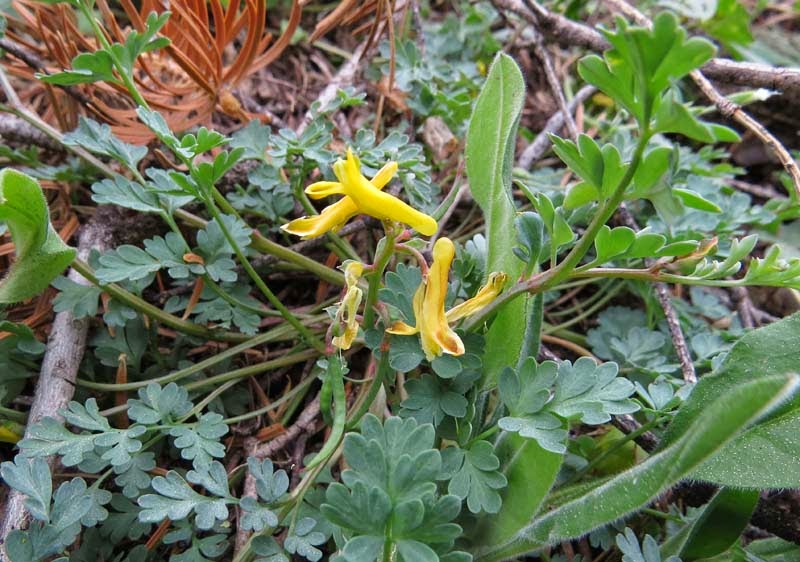 On our way down the mountain this tom Wild Turkey was displaying at a female. Notice the pale rump and tail tips, indicating one of the western subspecies. These birds were introduced here, perhaps from a Mexican or Texas population. 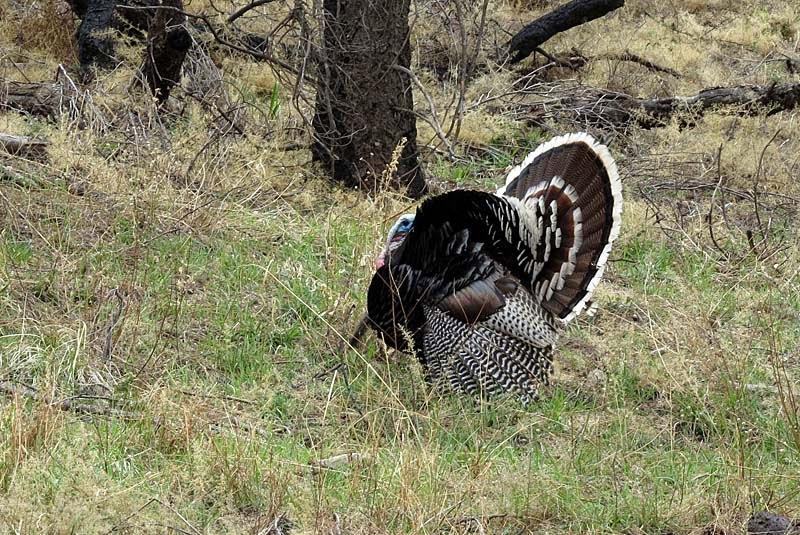 We finished the day with a short but bird-filled stop at “Lake Cochise,” the treated sewage pond behind the Willcox golf course. This is a Long-billed Dowitcher. 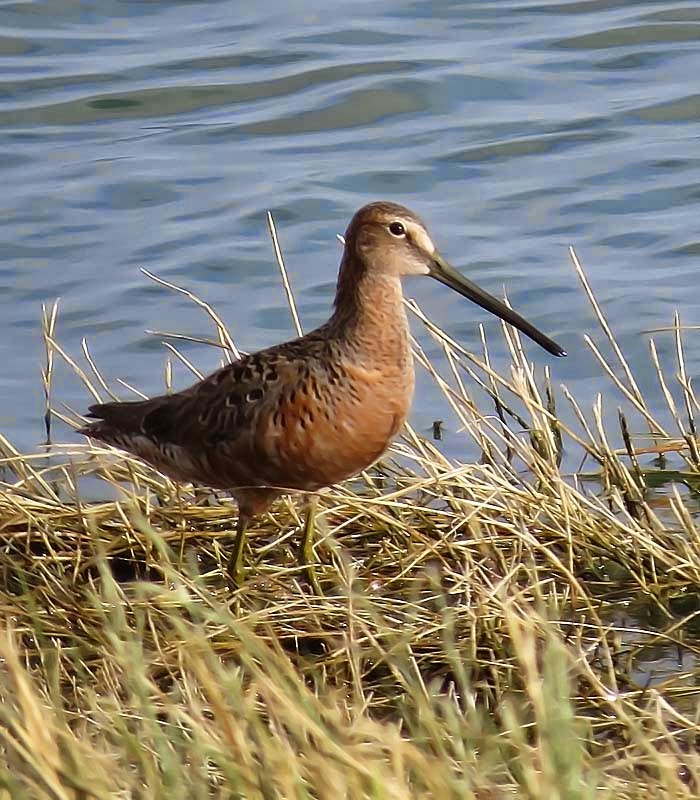 A group of White-faced Ibis foraged intently by the road that circles the lake. 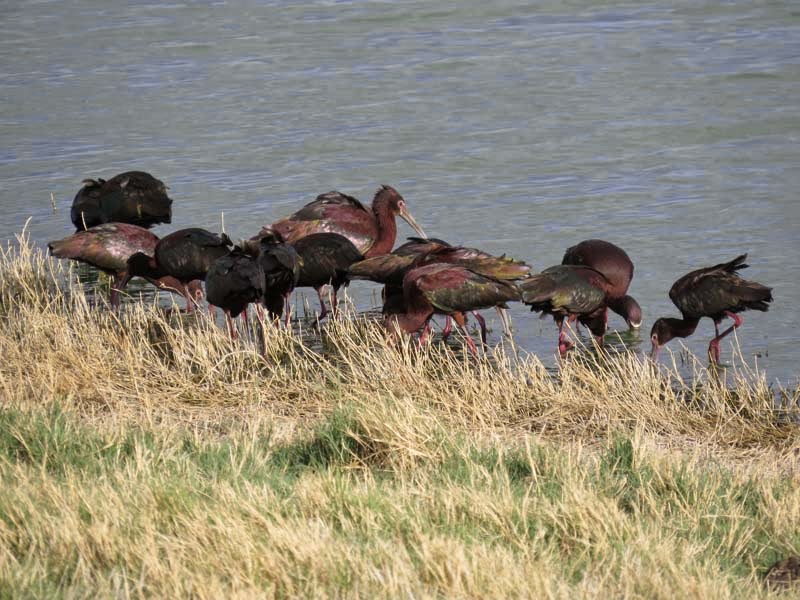 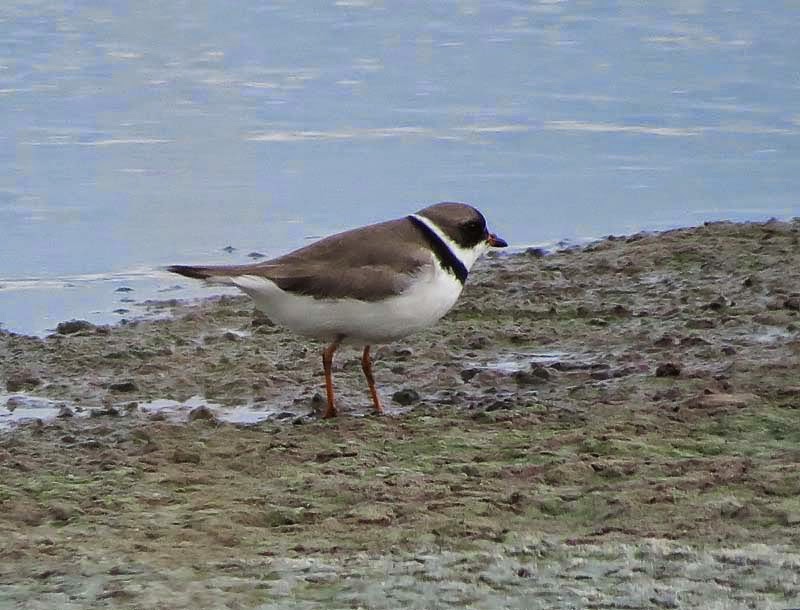 We coincided with the narrow window of migration for Franklin's Gull. 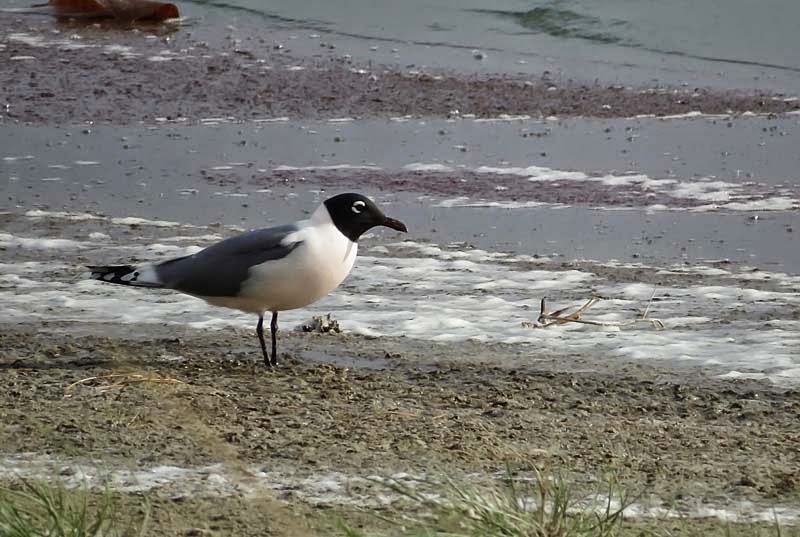 An a second-year Bonaparte's Gull stopped by for good comparison. 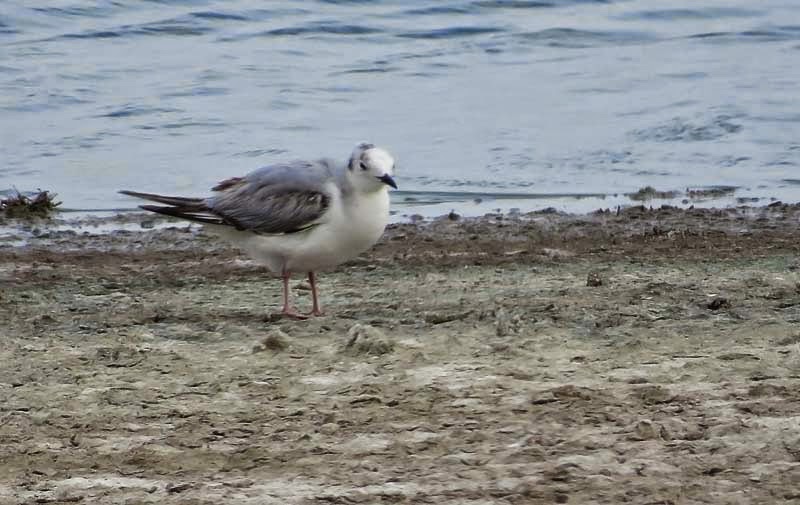 Not only birds are the attraction here: the Pink-flowered Hedgehog Cactus, Echinocereus fendleri was in full bloom. 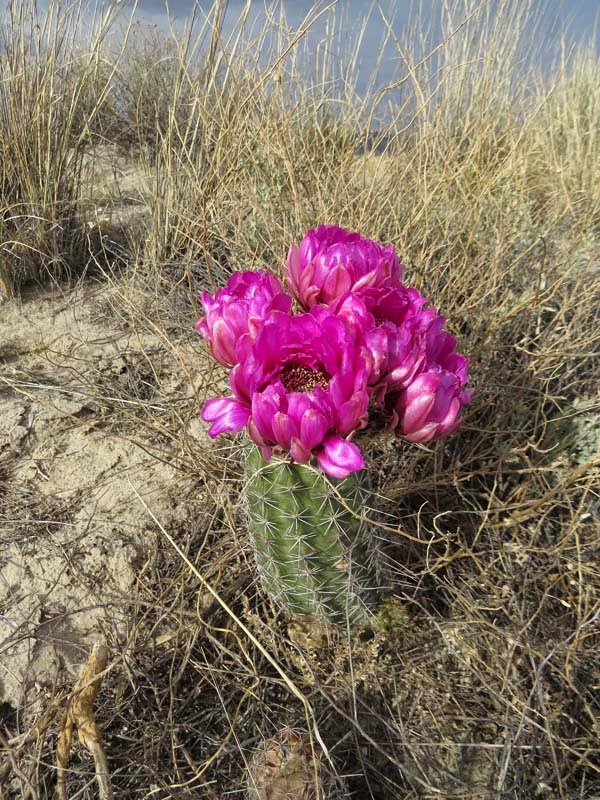 I turned over a piece of wood and found this Arizona Stripe-tailed Scorpion, Vaejovis spinigerus. 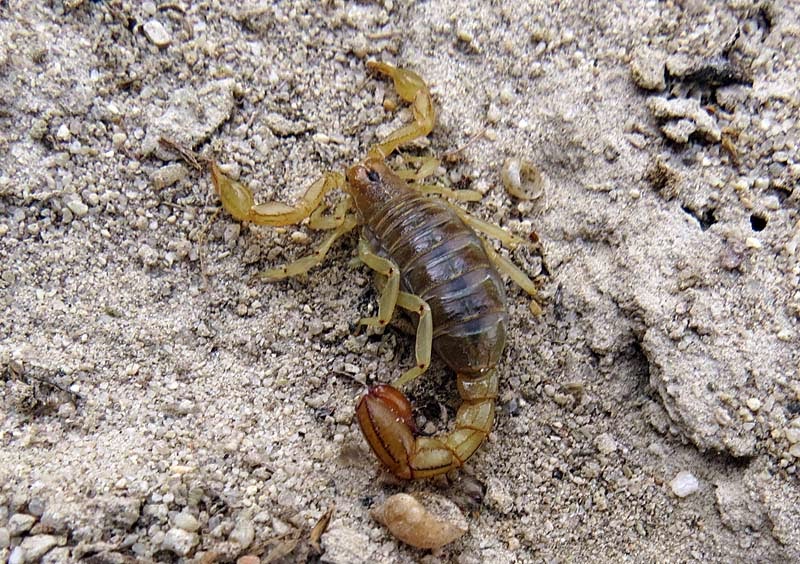 Despite the lack of trees here, this Ornate Tree Lizard, Urosaurus ornatus was in the same area. 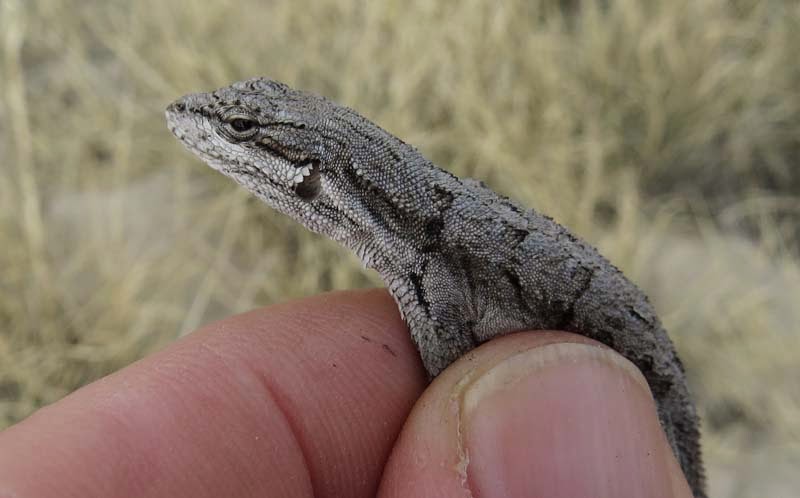 Anthony continued on to Phoenix, where he caught up with the established Rosy-faced Lovebirds, and then the next morning I joined Jeremy Gatten, visiting from Victoria BC – the topic of my next two blogs.

Addendum: For added observations and a different perspective, read Anthony's blog on this trip.
Posted by Birdernaturalist at 9:12 AM