I interrupt this series of Jamaica blogs to bring your attention to my upcoming plans to be in Oregon, my home state.

But first, this is what $662.99 worth of groceries looks like on my living room floor – taken yesterday afternoon. These are all now well-packed into 10 flat-rate boxes and one non-flat rate box and as of 10:30 this morning are on their way to Gambell, Alaska. Over the last few days I’ve been making a shopping lists using all of my recipes, and dividing them into non-perishables and perishables, Yesterday I rented a car (it took Enterprise FOUR HOURS to get me a car, by the way: almost three to send a driver  to come pick me up – and I live 10 minutes’ drive away – and then they had me wait in their office over an hour before they had a car cleaned and ready, and it wasn’t all that clean), then I drove around to seven stores before I had everything I needed. I have each box numbered and a list of the contents and total cost as well, as almost invariably one or two boxes do not arrive, or at least do not arrive intact. It seems the USPS likes to occasionally test the strength of their flat-rate boxes by either running over them with a tank or dropping them off a 20-story building multiple times. 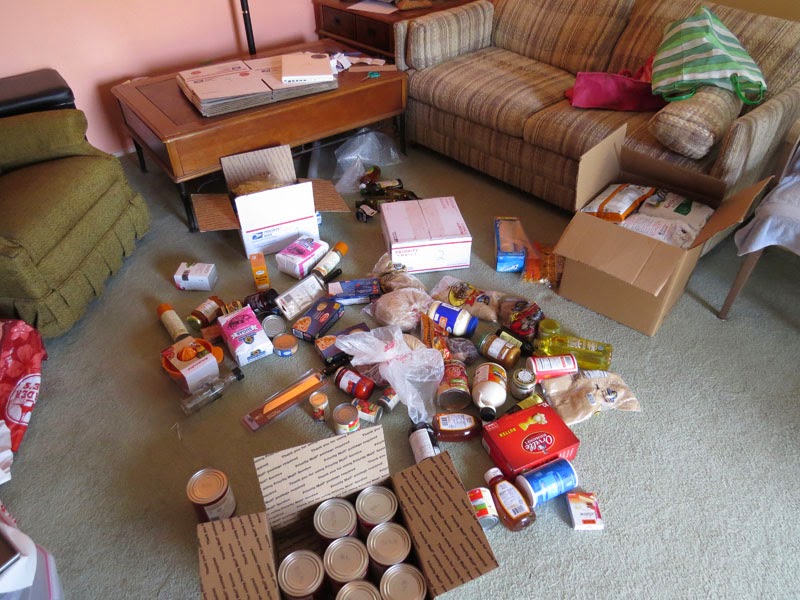 At the end of this month I’ll have two days in Anchorage to buy all the perishables (dairy, eggs, veggies, fruit, and frozen food), box that all up, and then fly out to Gambell on June 1 with Jon Dunn and 14 of the participants. I hit the ground running, unpacking everything and starting on the first night’s dinner: Oven-roasted Salmon with Tangerine and Ginger Relish | Green Beans with Toasted Hazelnuts and Brown Butter | Leafy Green Salad with Balsamic-Dijon Vinaigrette | Dessert: Fresh Strawberry Mousse.

After Alaska I’ll be in Oregon – twice in fact, with tours to Costa Rica and Brazil in between. The first stop will involve a weekend in Sisters where I’ll be helping lead field trips and give a very short slide show for the Dean Hale Woodpecker Festival. The field trips are filling up for this, so click on the link to sign up. The dates are June 19-22, and I’ll be leading field trips with my friend Tom Crabtree on the 21st and 22nd. 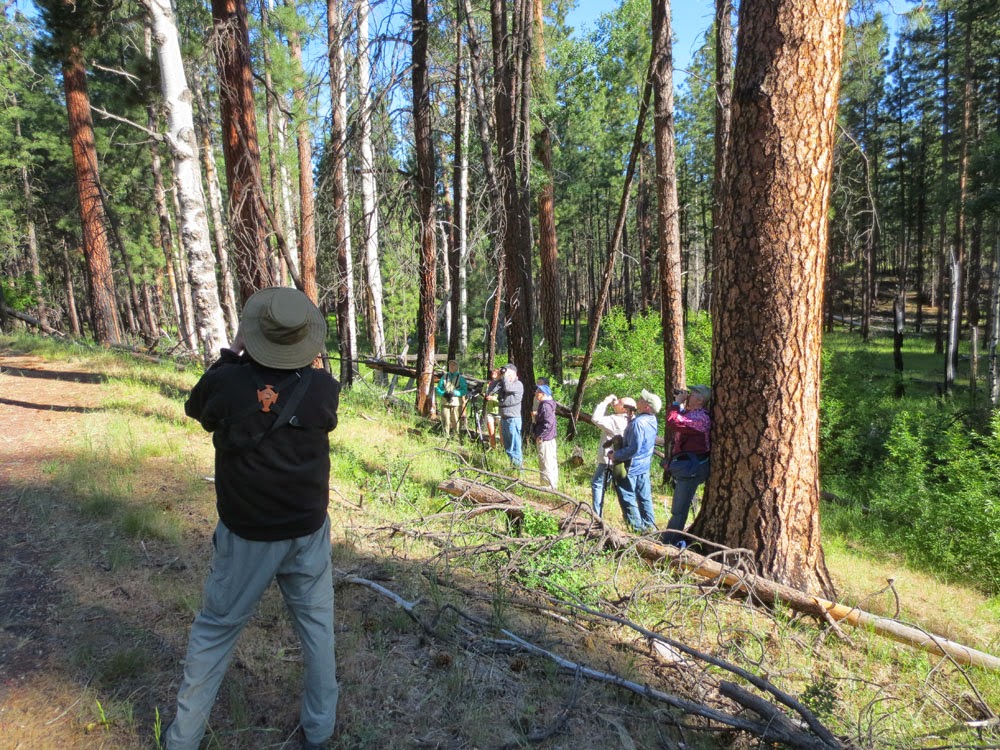 I led field trips for this festival last year and found the participants and the birding a real delight. Of course, I’ve been traveling through and birding the Sisters area for over 25 years, so it was a treat to get to spend some time there. One of the places we visited last year was Cold Springs Campground, and the birders in the photo above were watching this Williamson’s Sapsucker at the nest. 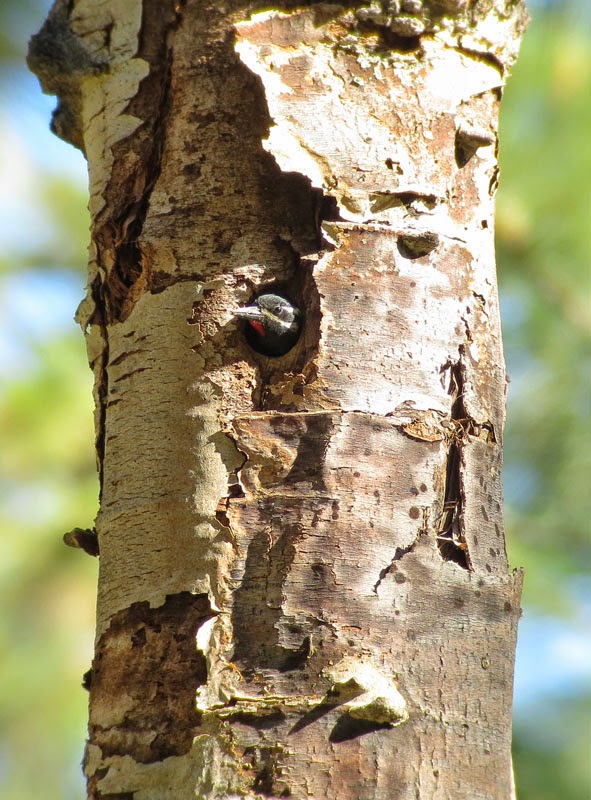 Later, we were at Black Butte Ranch at a stakeout Red-breasted Sapsucker nest, also in the Quaking Aspen. 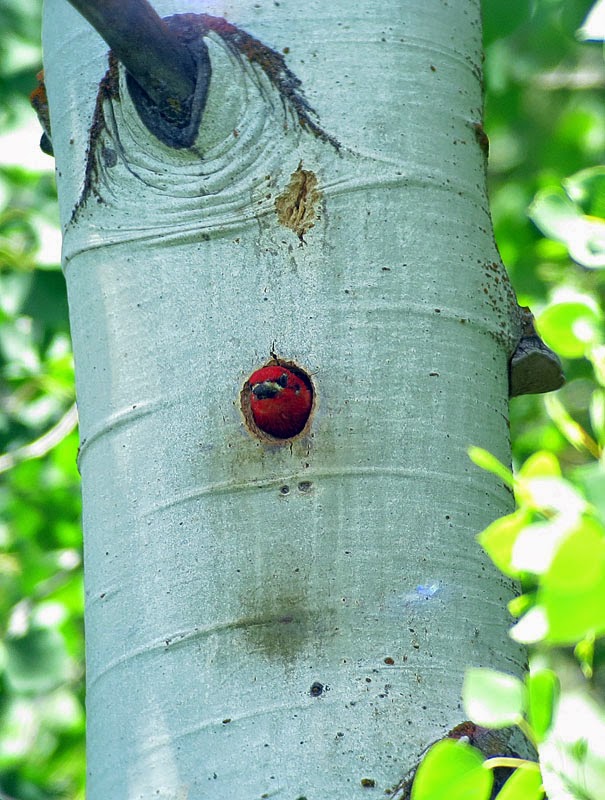 The most exciting find was this Northern Pygmy-Owl, which was also at a nest stakeout. 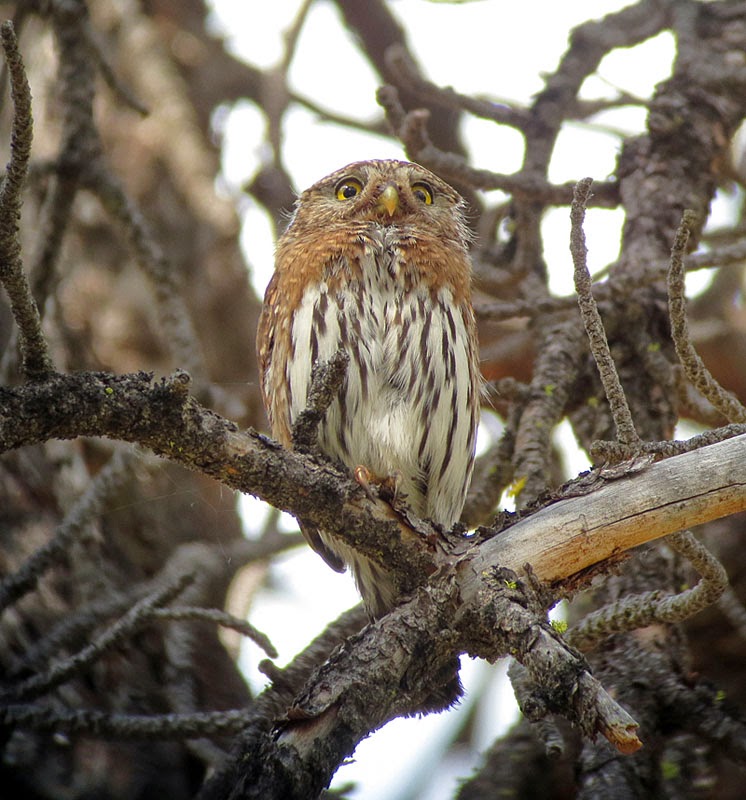 What was amazing about this owl nest is that it was in a cavity only a couple feet above an active Red-naped Sapsucker nest, across Indian Ford Creek from where we saw the owl. So if anyone tells you that you are overly stressing a bird by mimicking or playing recordings of owl voices, you can tell them they don’t know squat about what really goes on in nature. 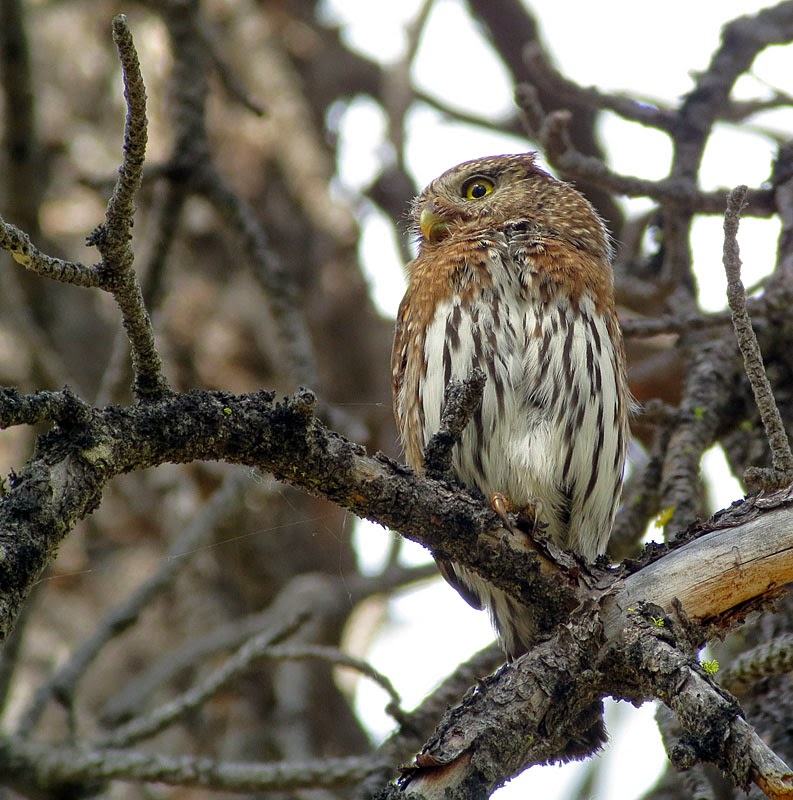 But even more amazing about this owl was that we watched it regurgitate a pellet. That’s the first time I’ve ever seen that, and I wasted no time in rushing over and picking it up. (And the owl didn’t budge when I went over to it.) 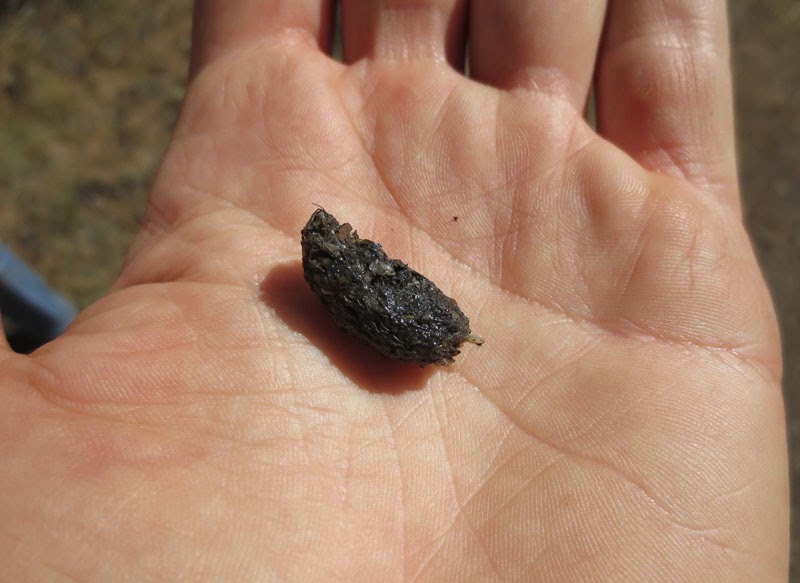 The end of the story is that I sent it to Dr. Carla Dove at the Smithsonian and found out, in basic terms what this owl had been eating. If you don’t know who Carla is, just google her name, and you’ll be fascinated (the video interview is especially entertaining). She wrote back to me, “Suzanne Peurach (USGS Mammals) identified the mammal hair as Sciuridae (chipmunk) but not enough hair to make a species identification. Kevin DeQuieros (Smithsonian Herpetology) identified at least one lizard as Western Fence Lizard but is not sure that is the only lizard in the sample because there were some smaller bones. He separated some lizard bones into a separate vial. I can only say that the feather microstructure is passerine but cannot identify a species or even a family. It could be that the individual bird was a nestling because even though there were several whole feathers and a partial beak, I could not make a match to anything that I could think of or anything on your bird lists.” I think it’s a fair guess that the bird was a nestling, as it’s likely that such young birds are not well represented in the museum’s collection. In any event, I was very excited to hear the results.

We saw some other cool stuff, plants, and bugs. This is Pterospora andromedea, Pine Drops, a saprophytic plant. 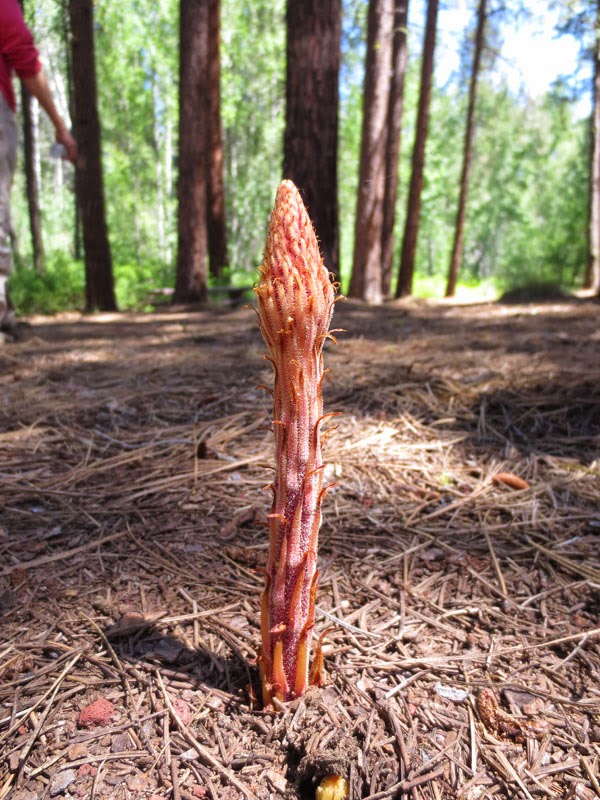 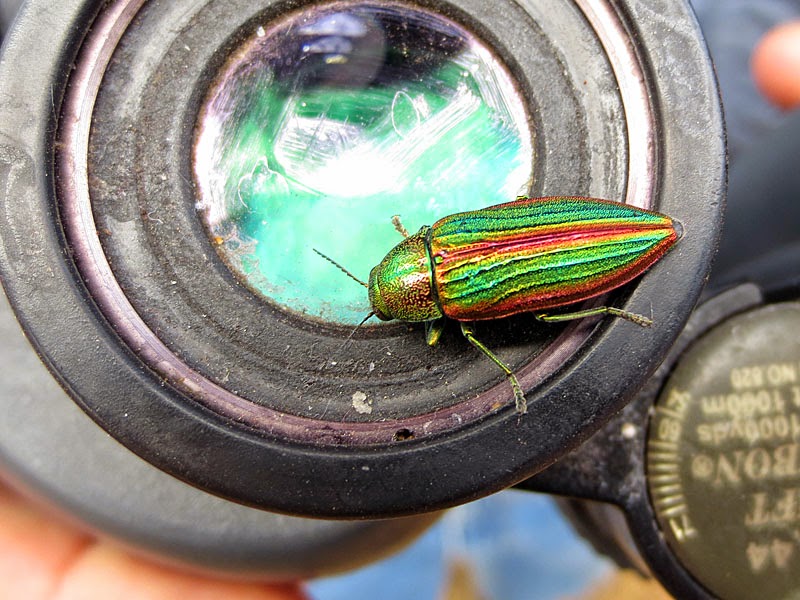 This tiny, odd moth in the family Plutellidae (which I’d never even heard of before) is Euceratia castella, and since its caterpillars are known to feed on Caprifoliaceae, I’m guessing that here it feeds on the common Lonicera incolucrata, Twinberry Honeysuckle (also a favorite nectar source of the Calliope Hummingbirds, which we also saw here). 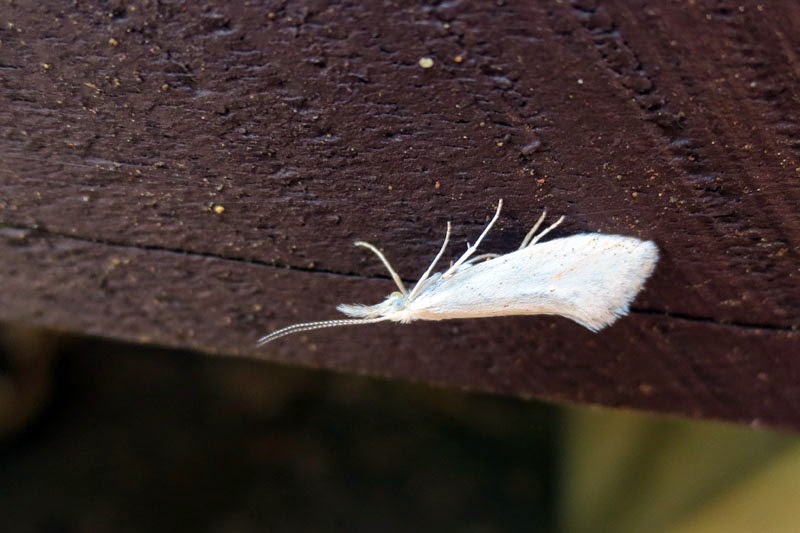 When I come back to Oregon in late August, I’ll be leading my Oregon in Late Summer WINGS tour, doing a grand loop around the state, starting and ending in Portland. There are several spaces left on this tour, because the newest member of the WINGS team is being treated to a free trip as a participant but is ready to drive a second vehicle if we get a few more. Fabrice Schmitt came to Arizona just this past January for his first visit to the USA, and he had a great time. I’m certain he’s going to be blown away by Oregon. He now lives in Chile and has been guiding all over South America for the past several years but hails from Mulhouse, France in the southern Alsace, very close to where I spent a year as an exchange student in  Freiburg, Germany. I really look forward to having him on the tour, and I know the participants are in for a treat.

I’ve done this same tour several times in May and July previously, and years ago I did a couple tours in the southwestern part of the state in early September. Maybe some day I’ll offer tours in October, January, and April, as there is no perfect time to bird here, and it’s beautiful and birdy all year ‘round. Besides full-swing migration (especially with shorebirds), one highlight of this upcoming tour is the chance to drive to the top of Steens Mountain, the highest road in Oregon. I’ve blogged a bit about this most beautiful place in the world. The past two times I’ve been here I’ve managed to find Black Rosy-Finch, the only place where it breeds in the state.

Starting with a close-up of Steens Mountain Thistle, Circium peckii, here are a few shots from the rim of Kiger Gorge and East Rim, followed by a panoramic shot from below, looking up at the steep side from the Alvord Basin. Be sure to click on the photos for the full size. 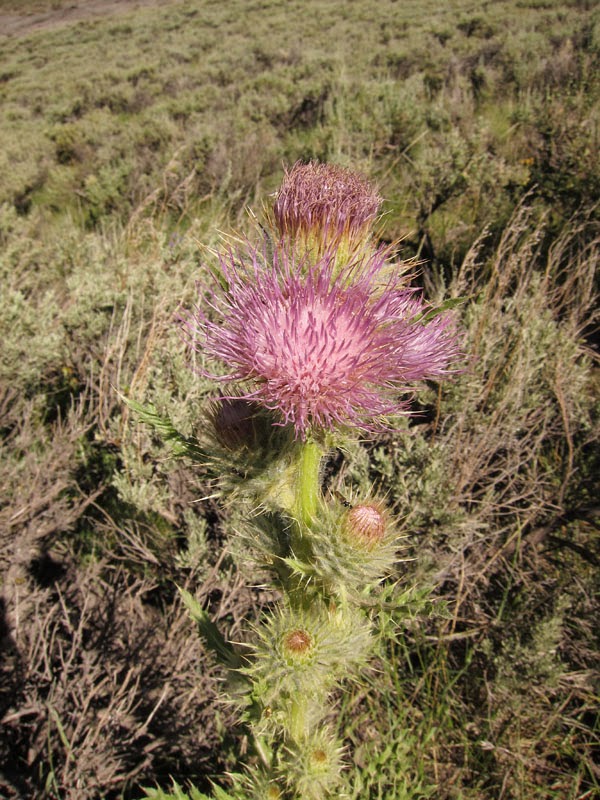 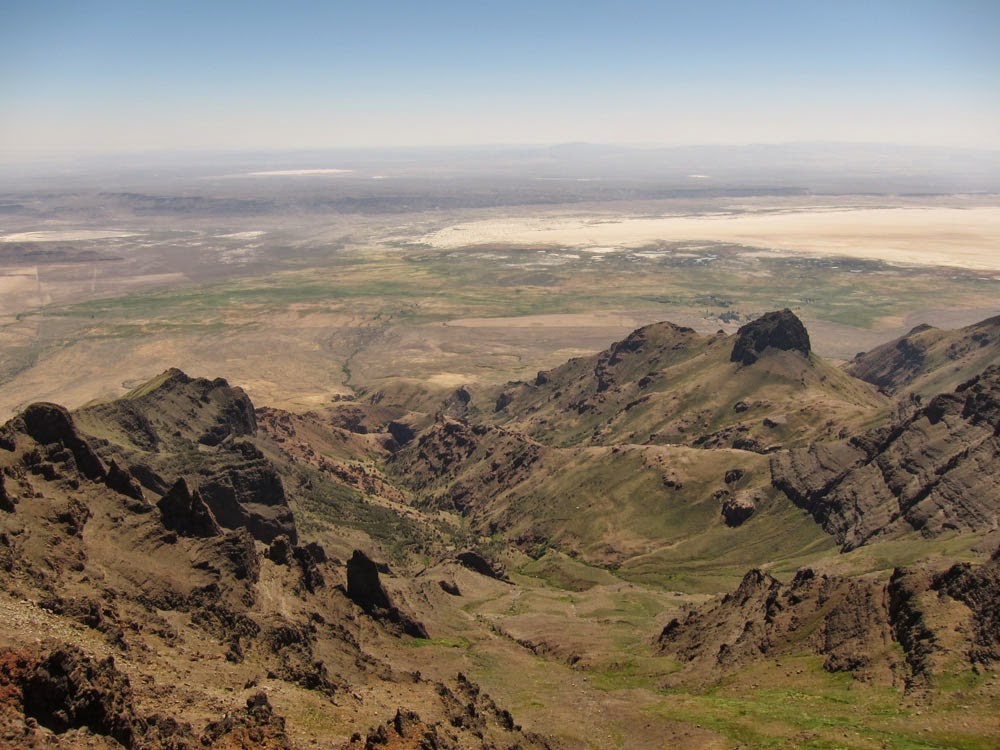 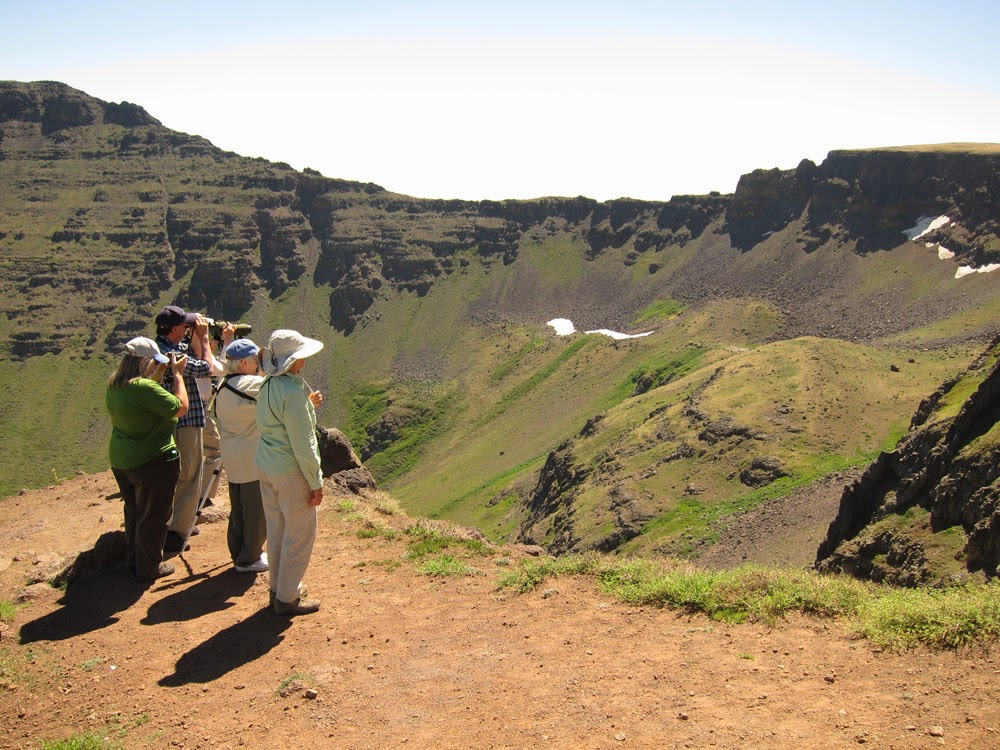 Posted by Birdernaturalist at 6:10 PM