Out and About With the Naturalest Naturalist – Part 1

Any excuse for exploring my favorite corner of Arizona will do, so when Jeremy Gatten of Victoria, BC emailed me out of the blue and presented his own naturalist history blog as credentials – The Naturalest Naturalist – as well as our connection with the Peru Birding Rally Challenge (he won a free spot on the press van on last year’s event) – I said I’d be happy to join him. He was going to be in Phoenix for a course on bats and would do some birding on his own before it, but he was especially interested in looking at butterflies, dragonflies, and other critters if I were available afterward. I suggested the southward-flowing drainages of the Atascosa-Pajarito Mountains on the border, and I also proposed we camp in order to try for Buff-collared Nightjars.

So the day after Anthony and I birded the Chiricahuas, Jeremy stopped by my place before dawn, and we made a bee-line for Ruby Road, starting on the west end at Arivaca. Of course, we found it impossible not to stop and made two random pauses on Arivaca Road where Gray Hawks screamed, Rufous-winged Sparrows were in pairs everywhere, migrant Lark Sparrows were in flocks of a hundred or more, and a distant Crissal Thrasher was in full song. Once beyond Arivaca, we saw two Antelope Jackrabbits (the first 2 miles of Ruby Road are the best place I know for this species), made a quick stop hoping for Thick-billed Kingbird in Oro Blanco Wash (a very birdy spot with migrants such as MacGillivray’s Warbler and Green-tailed Towhee, but no kingbird), and then stopped just when we got into the oaks just short of the watershed divide.

As soon as we got out of the car, I heard the distinctive whistles and proceeded to show Jeremy how to whistle in Montezuma Quail. This male came right up to us after just about 2 minutes of whistling. There was another nearby that wasn’t quite as close and at least three more about 100 yards away on another hillside. 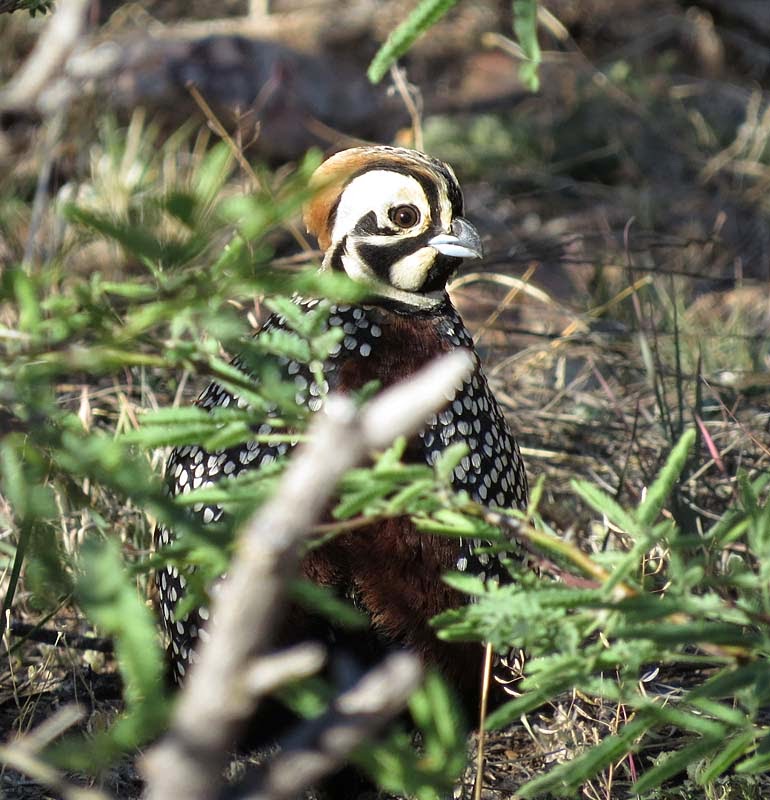 By the time we left here at 8:00 a.m., we had already seen and heard nearly 70 species of birds, and we still hadn’t even started down California Gulch yet. I had Jeremy come to a stop when I saw these blooming Huachuca Mountain Rocktrumpet, Macrosiphonia brachysiphon just above the California Gulch Road. They were still quite fragrant, but at night the heavenly scent of a single flower can perfume a large room. 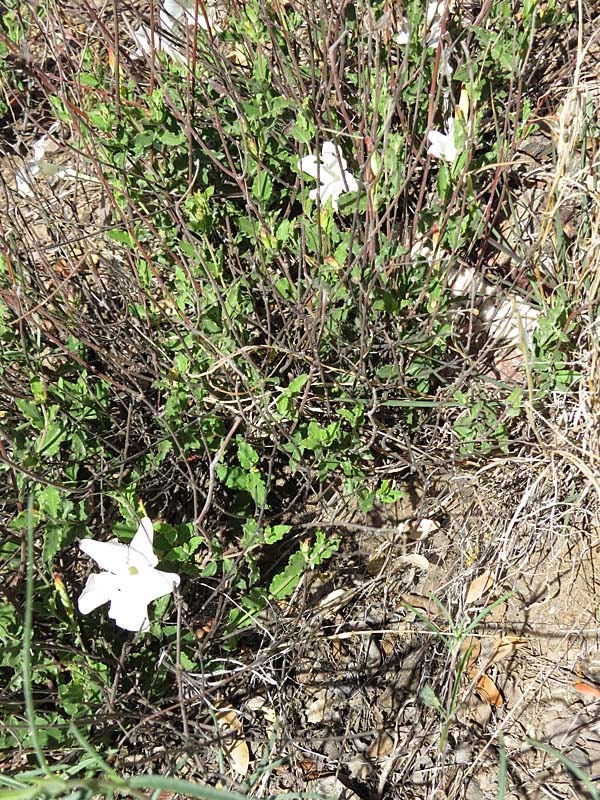 We were hoping for odonates (dragonflies and damselflies) when we stopped just below the upper dam in California Gulch, but it was still too cool; a cold front had just passed through making the temperatures very pleasant for us. This bold Vermilion Flycatcher was fun to watch in any event. 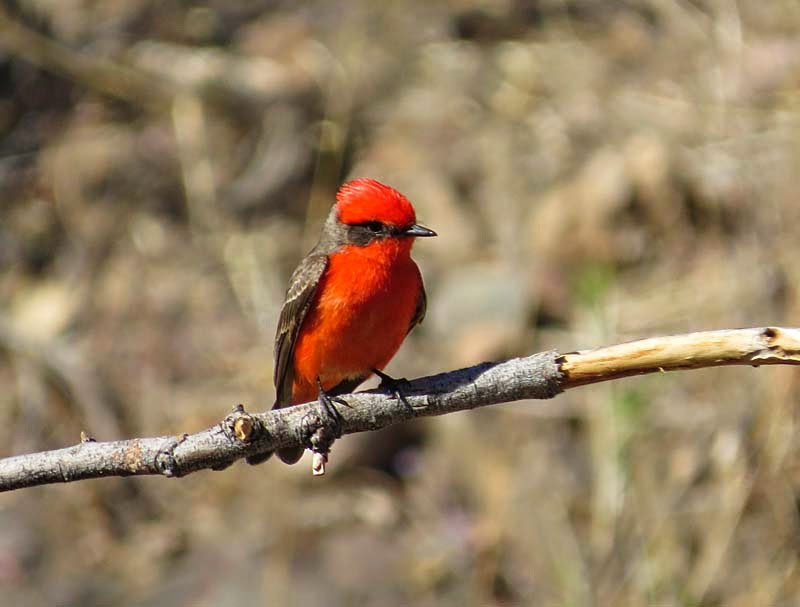 I made Jeremy stop for another plant on the side of the road, this Pine-needle Milkweed, Asclepias linaria, an individual plant I know well, as it’s been here for years. 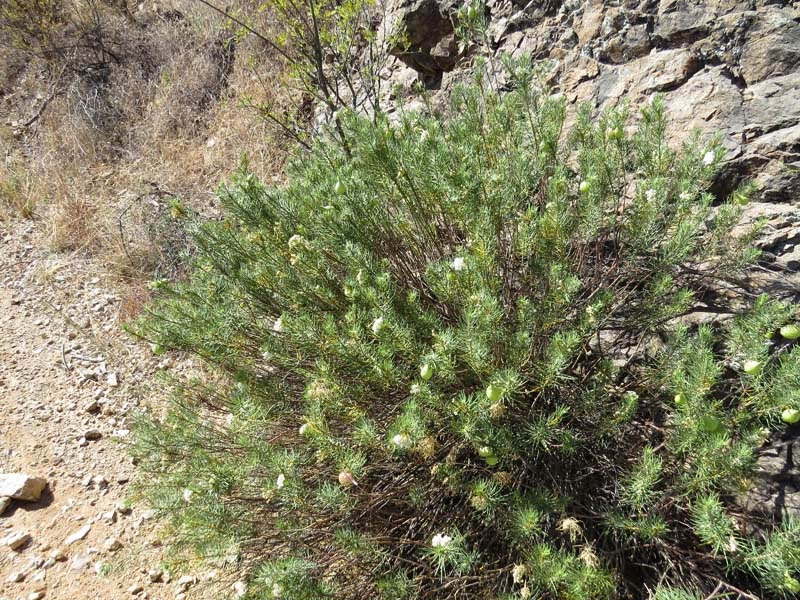 There were a few flowers, but I was looking for moths and bugs. There were some Oleander Aphids, Aphis nerii, common on almost any type of milkweed. 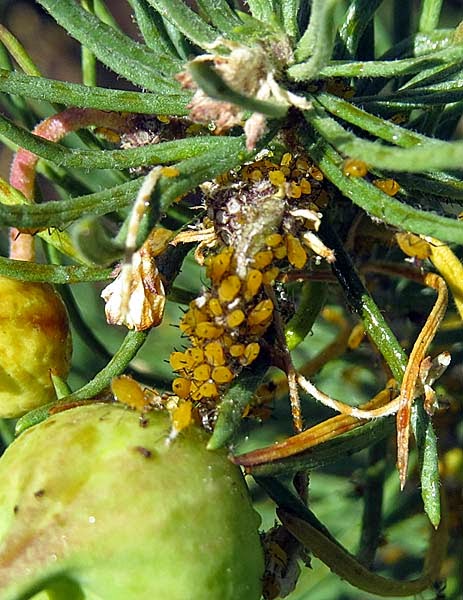 And probably not a coincidence nearby was this Spotless Lady Beetle, Cycloneda sanguinea. 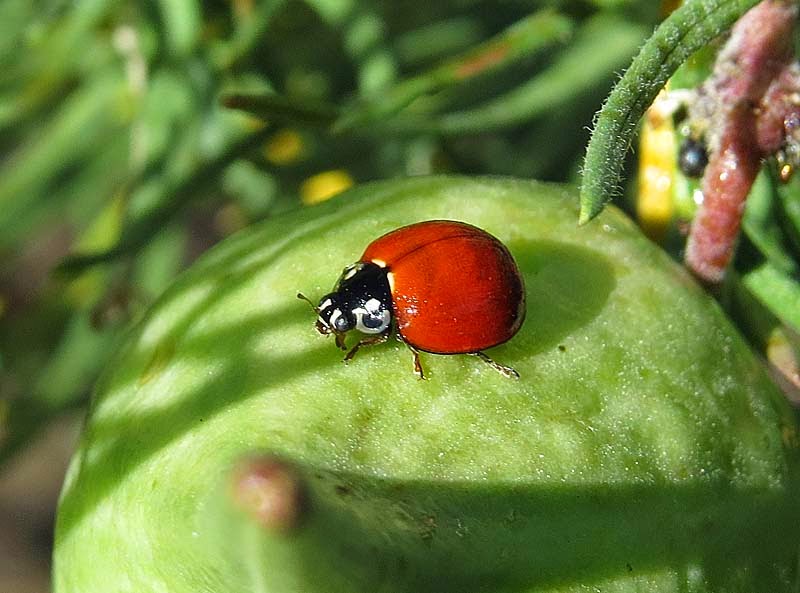 We then spent the next couple of hours exploring the highest part of the California Gulch Road where it overlooks Old Glory Wash and its confluence with Warsaw Canyon. Before long we saw Five-striped Sparrows here, but we had to scramble down the slope to see them well. One of the rather tropical plants in this same area is Doll's Head, Lagascea decipiens, one of my favorite composites. What you are seeing in this photo is a cluster of single-flowered heads at the end of a branch. Each showy little flower is subtended by its very own phyllaries, a highly unusual arrangement in Asteraceae. 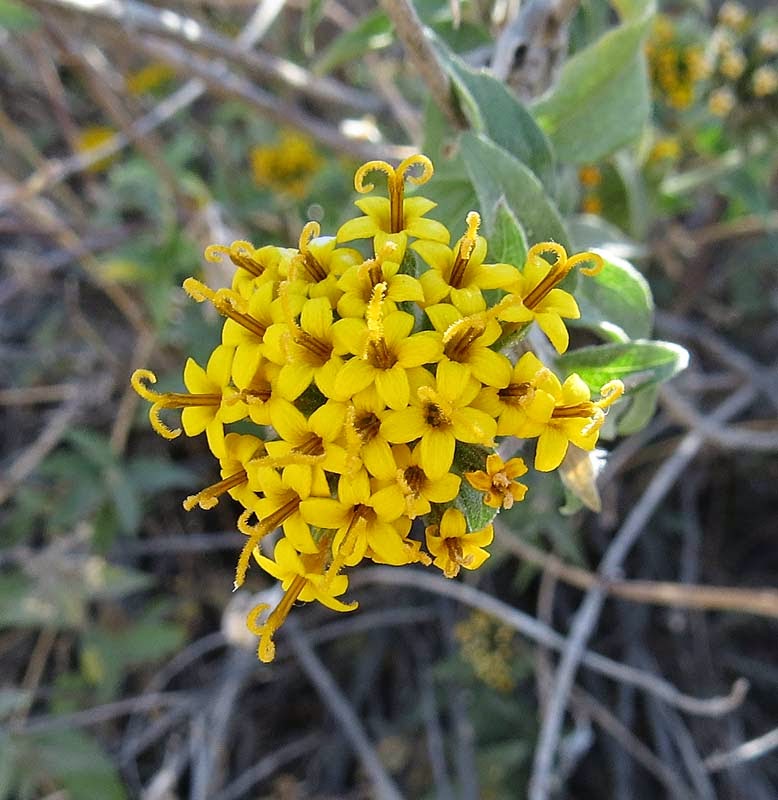 This plant bug nymph is probably in the genus Largus. Even adults are difficult to identify to species. 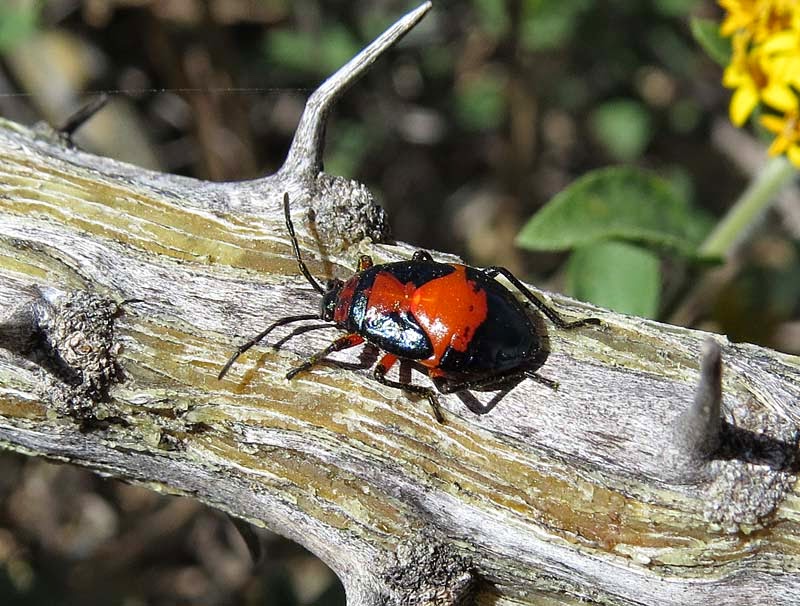 There were several grasshoppers in the diverse desert scrub, and we still don’t have a name for most. All appeared to be band-winged grasshoppers, subfamily Oedipodinae. During the summer rainy season and fall, this subfamily is far outnumbered by spur-throated grasshoppers, Melanoplinae, so it’s interesting that we didn’t see any of those. This distinctive one is either Leprus wheeleri or Leprus intermedius; the shape of the pronotum seems to point to the latter, called Sassure’s Blue-winged Grasshopper, but then color of the hind wing seems better for Wheeler’s. I’ll defer to Dave Ferguson on Bugguide when he gets a chance.. 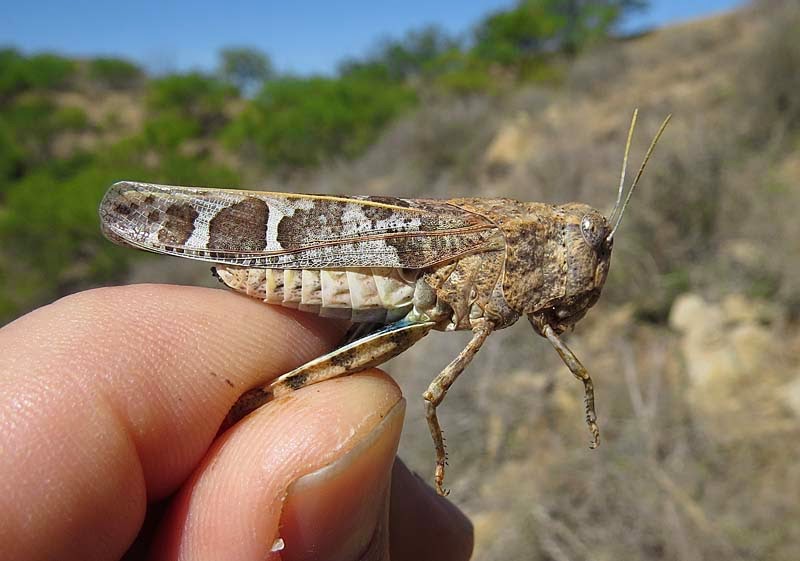 This bee fly appears to be Exoprosopa butleri, but an expert on Bugguide will have the final say. Bee flies often perch and have field marks, so despite their parasitoid lifestyle, the field ID of them is a lot like damselflies. You just need a good macro lens and patience. 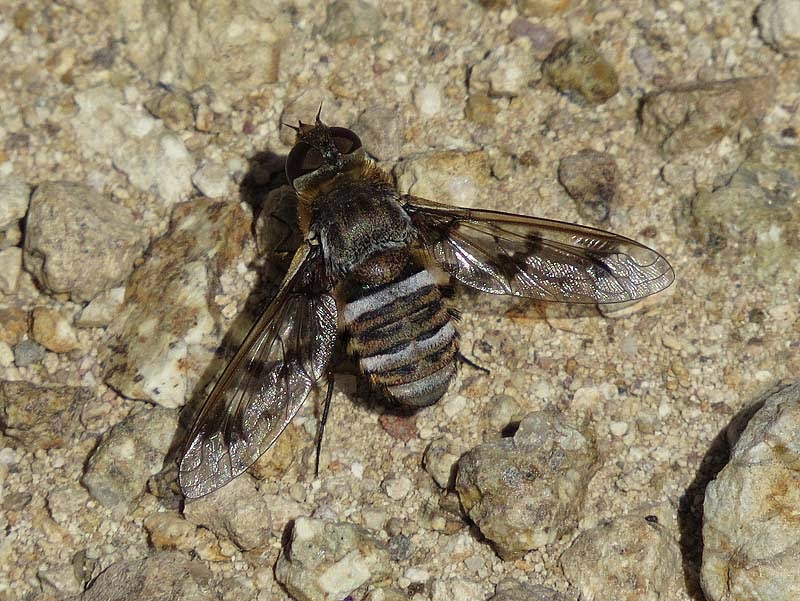 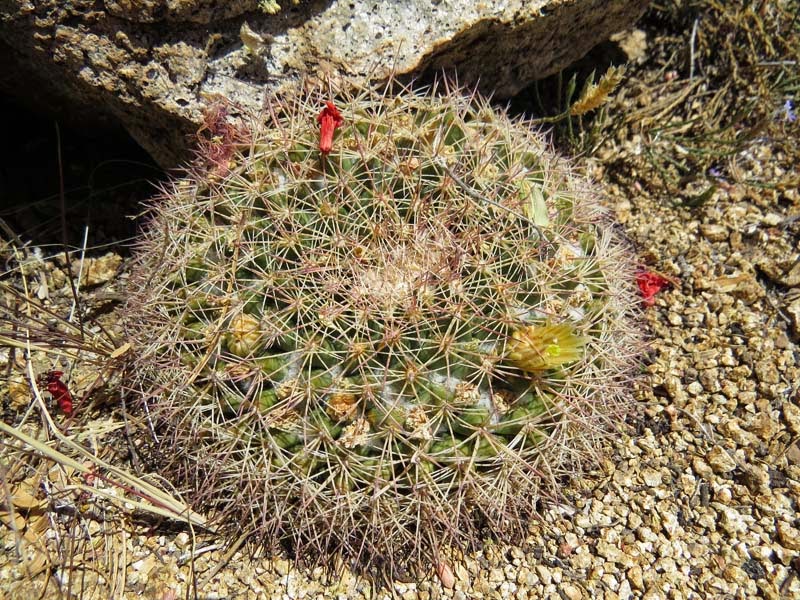 This Purple Scalystem, Elytraria imbricata is impressive only if you look very closely. It’s amazing that it could have such profuse blooms in this parched, limestone outcropping with such little rain this winter. 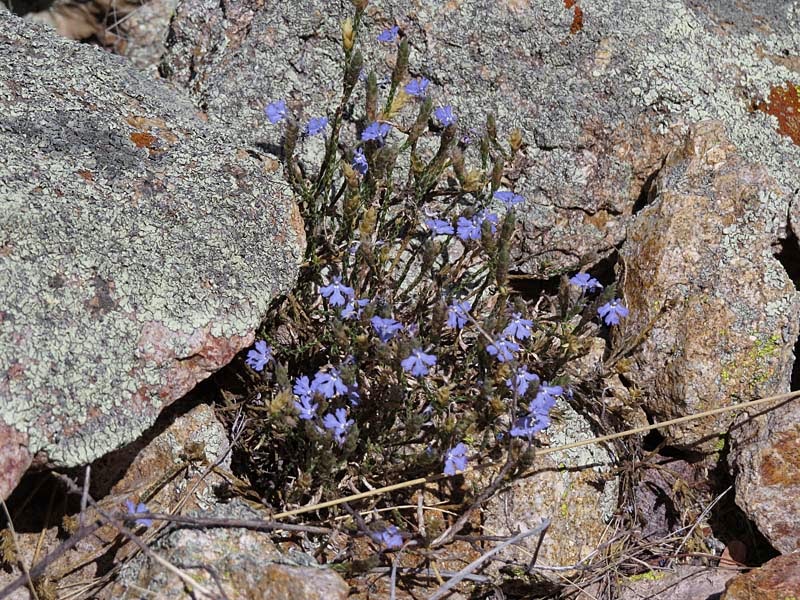 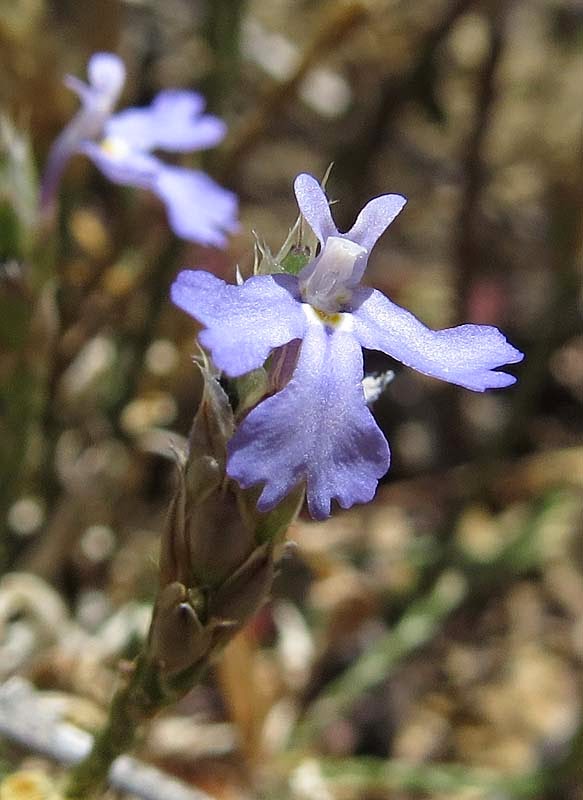 Doctorbush, Plumbago zeylanica. This rather tropical genus of plants just barely makes it into the US in SE Arizona, Texas, and Florida, and here only in a few localities. I have no idea why it has that common name; maybe someone imagined  “Zhivago” in the scientific name? 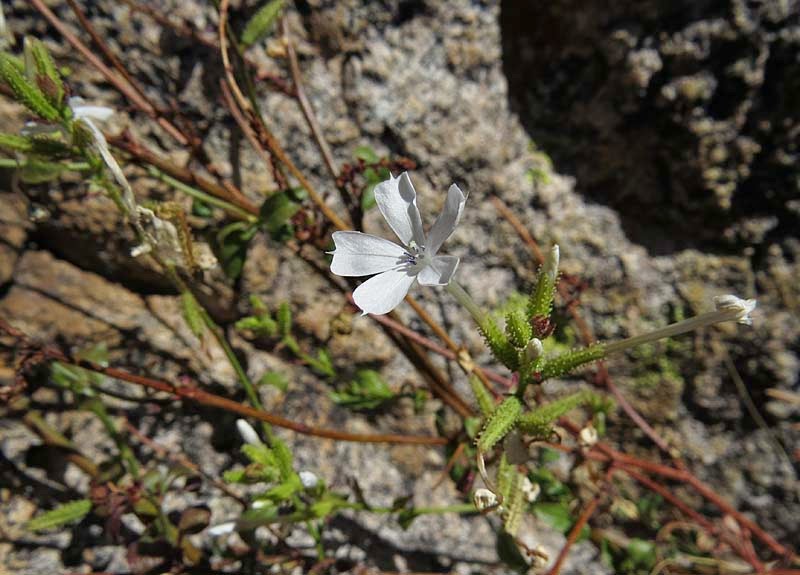 We scrambled to a small but prominent peak above the road and found it to have not only this fabulous view, but also some hilltopping insects. 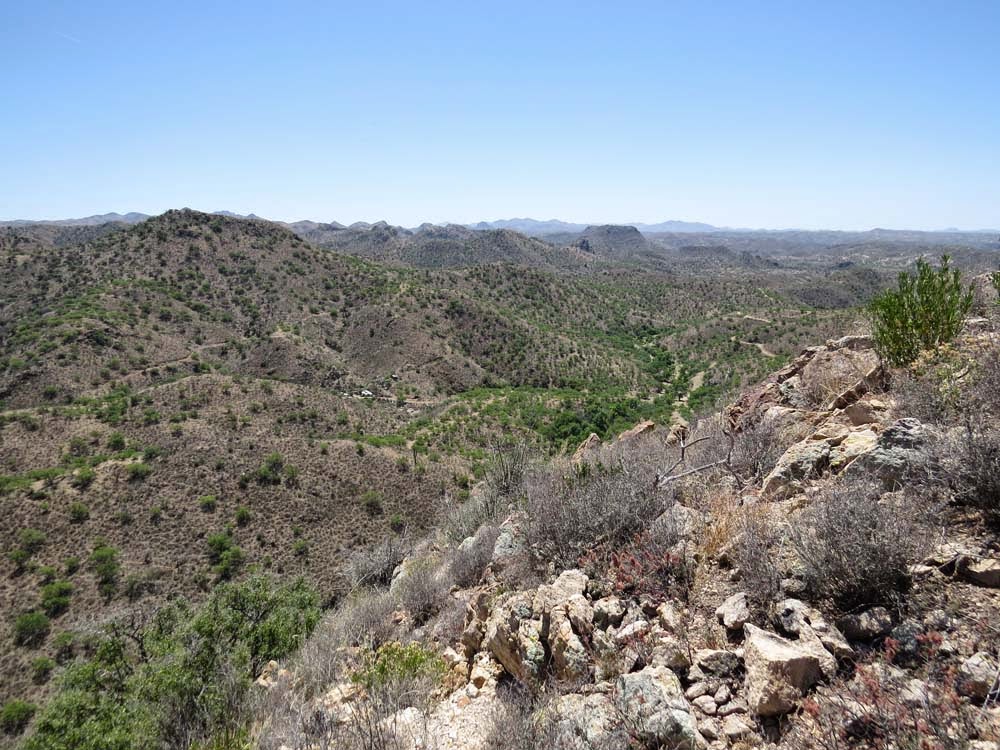 A hilltopping Mormon Metalmark, Apodemia mormo. (The English name is a conflagration of the specific epithet, which means “dark,” but that’s how a lot of common names of butterflies have been coined. Take the skipper Carrhenes bamba, for example; it’s called Ritchie Valens’ skipper since he made the song La Bamba famous, but that’s probably a Jim Brock invention.) [Update: Jeremy looked into this one further and found that it is actually a MEXICAN METALMARK, Apodemia mejicanus mejicanus! I'm sure I've seen this in Arizona before, but it's been so many years, I totally forgot about that as an option.] 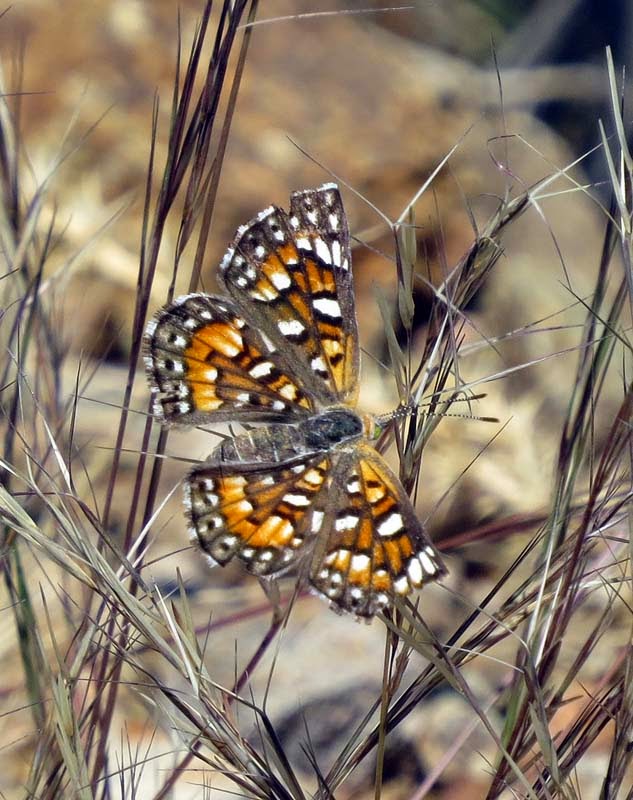 A Mournful Duskywing, Erynnis tristis. Unlike the Paciuvius from the Chiricahuas, this one is trickier to identify, looking especially similar to Funereal, but it helps that this is a fresh individual with brightly colored forewing patches and a nice, bright hindwing fringe. 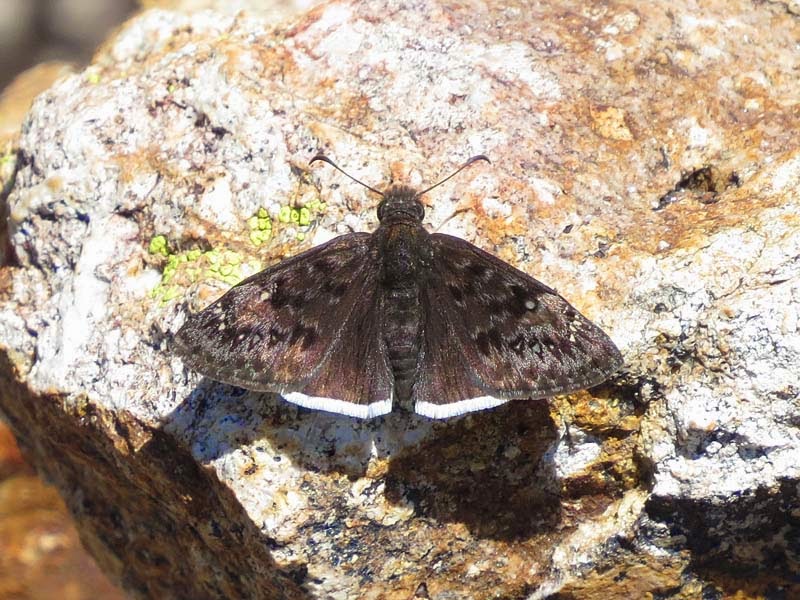 This Pahaska Skipper, Hesperia pahaska was one of two very territorial ones on the hilltop. 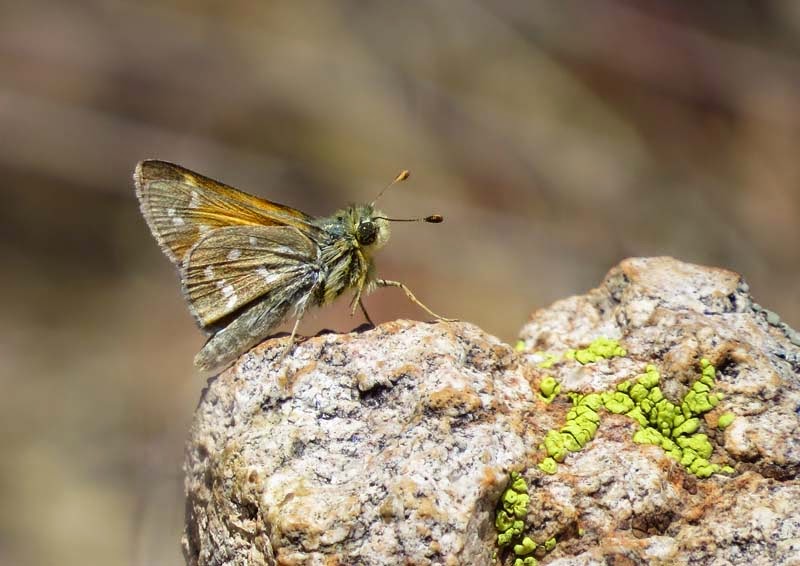 I don’t know if this bee fly, Poecilanthrax poecilogaster was also hilltopping or just on a typical territory. 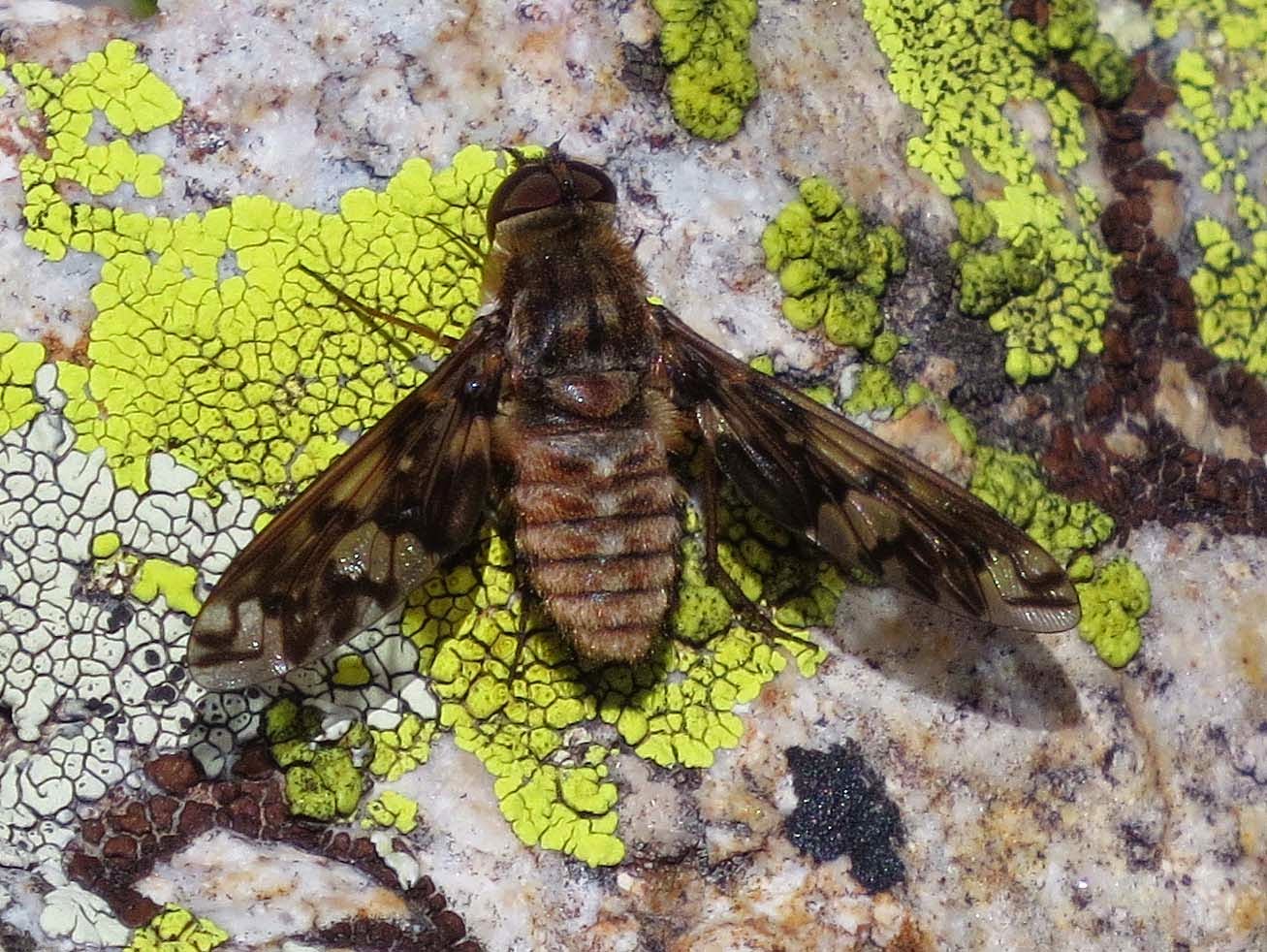 Finally a few more plants that were in this area: the usually spineless and often purple-stemmed Santa Rita Prickly-pear, Opuntia santa-rita. The flowers were full of tiny thrips, but they were too small for me to get a good photo. 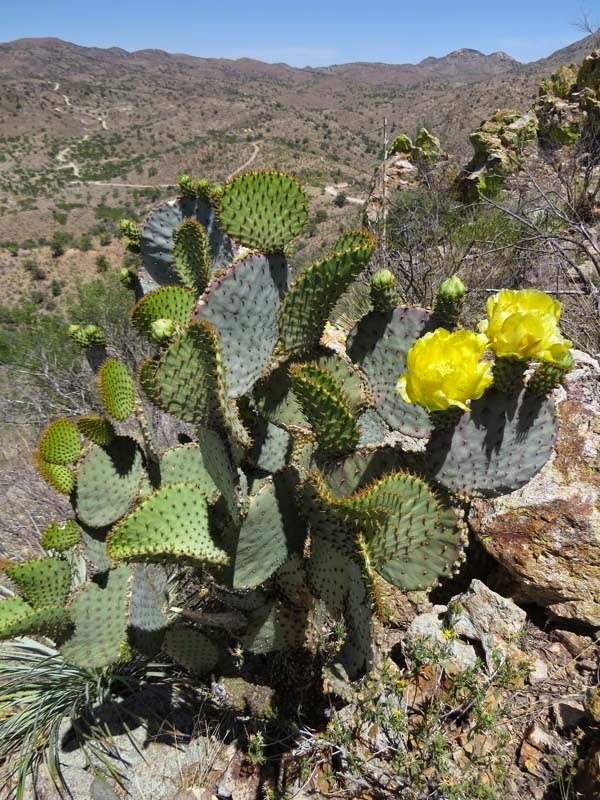 This plant I recognized from the Galapagos, Waltheria indica, with Uhaloa being the common name on the plants.usda website, which I don’t quite understand. It’s ok for the plants native to Hawaii, but should we be also changing the name of our Short-eared Owl here to Pueo? In any event, when I first learned this plant it was still in Sterculiaceae, the same family as cacao, but that whole family is now lumped into the mallow family, Malvaceae. I always thought this one looked more like a mallow anyway. It just barely makes it into a few southern states in the US. 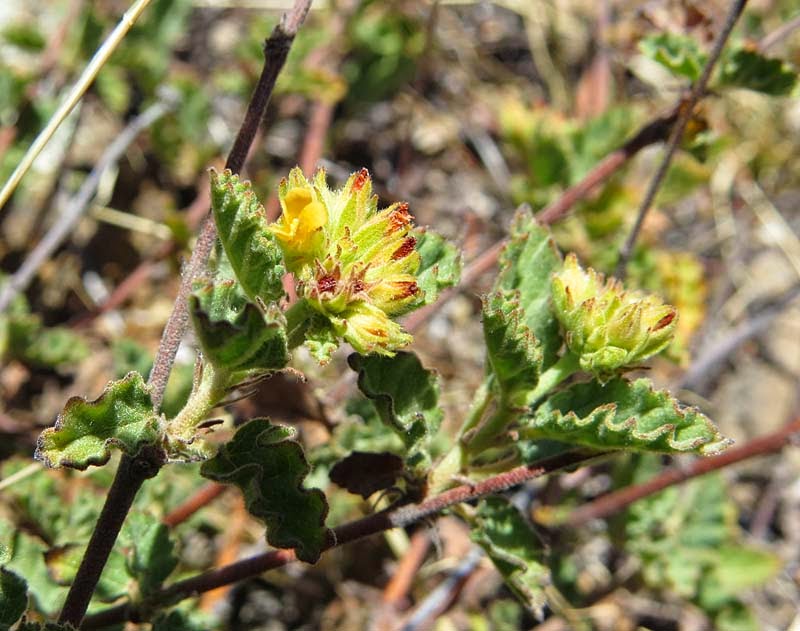 There are more Daleas (prairie-clover) than you can imagine in Santa Cruz county. This is almost certainly Dalea pringlei, but the traditional botanical keys don’t let you just look at flowers – you need fruits, stems, leaves, and in some cases even roots to see whether it’s an annual or perennial. 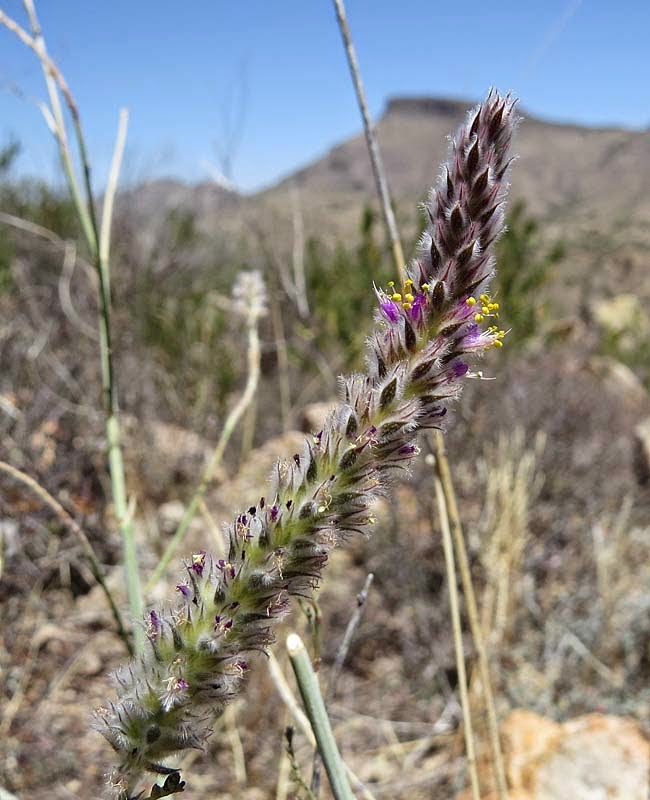 This one is also pretty much a guess, Dalea pulchra, Santa Catalina Prairie Clover. It’s rather shrubby and weedy but very attractive up close. 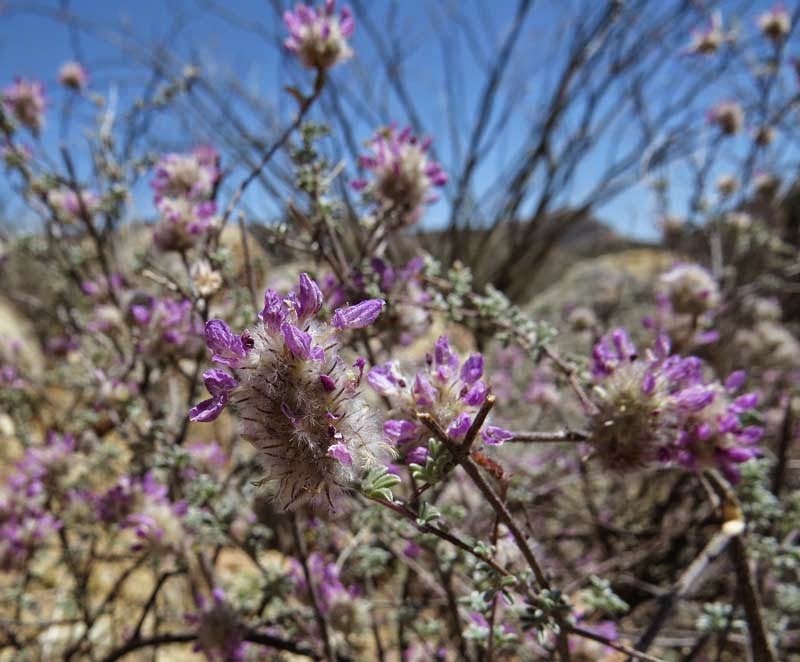 This takes us up until about noon only on this really full day of natural history exploration. I’ll cover the latter half of the day in the next blog.
Posted by Birdernaturalist at 10:26 PM