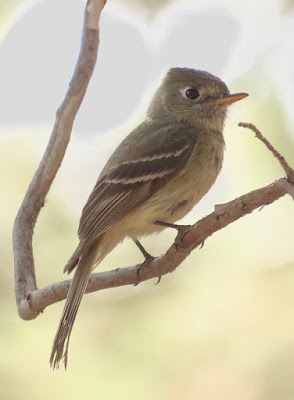 I was in Arizona for less than 24 hours from my seven weeks’ vacation in Nepal when I found myself looking at the first US record of Pine Flycatcher, Empidonax affinis, at Aliso Spring in Sawmill Canyon on the east flank of the Santa Rita Mountains southeast of Tucson. I had been invited to join Beth and Will Russell and Scott Olmstead for the rarity chase (a twitch to British birders), and I couldn’t resist the temptation. This is a very remote location, and the final 3 miles are on a rough dirt and rock track that requires high clearance and very good 4-wheel-drive. 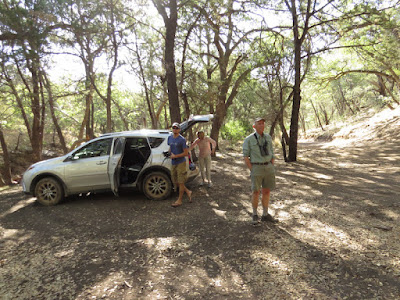 This bird was discovered by my friend Dave Stejskal (a professional tour leader for Field Guides Inc.) last weekend while he was camping with friends in a location neither he nor any other birder I know had ever visited. Flycatchers in the genus Empidonax are notoriously difficult to identify, even among species that we know well, and before the 1970’s, some were simply considered unidentifiable in the field by even the most advanced field birders of the time. Now we know that a combination of field marks, behavior, and voice will allow you to identify almost any “empid” in the field, but it takes a lot of study and experience. And the most experience birders must still beware of silent empids, and photos can be impossible to assess correctly. 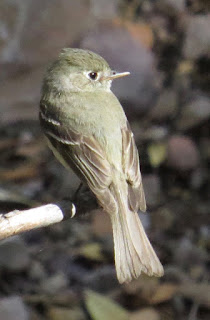 Pine Flycatcher occurs from Guatemala in the south, ranging well north in forested mountains to central Sonora and Chihuahua in the Sierra Madre Occidental. It's not a very common bird even in northern Mexico, and Hendrik Herlyn and I found what we were told was the first record for the state of Sonora near Yécora in October 1995. It’s long been thought to be a potential vagrant to the SW United States, but few American birders have much experience with this species, and it’s fully possible that birders have looked at a dozen of these in their binoculars over the past 50 years in Arizona and walked away either not identifying it or misidentifying it as something more expected (before 50 or so years ago, people interested in identifying such birds just shot them, and there are no old specimen records). On top of that, there’s at least one recent report of a Pine Flycatcher in Texas that over several days of observation and inspection by many birders was finally correctly identified as either a Least Flycatcher or a hybrid, but definitely not a Pine. It took someone like Dave Stejskal to coincide with this rare visitor and identify it correctly. 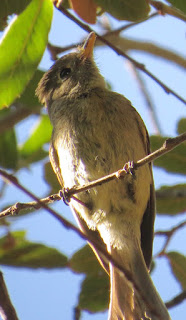 As a matter of fact, he fairly first assumed it was a late migrant Dusky Flycatcher, as its call, proportions, and bill shape are similar to that species. But after seeing it better, recording the calls, consulting with others back in Tucson, then returning for more photos and recordings, he came to the inescapable conclusion. So on Monday, Memorial Day, he took the risky plunge of announcing it to the world, put out the rare bird alert on the internet, and birders around the country began making travel plans. 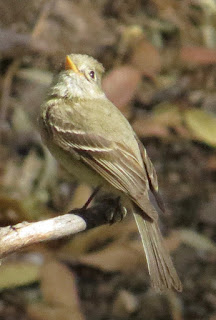 It’s now been just 9 days since the announcement, and though no one is keeping track, it’s likely that well over a hundred people have seen it by now, maybe a few hundred. It calls frequently and is building a nest high in an oak tree. It has no fear of humans (sometimes perching with a few feet of people’s faces, or snatching bugs off the ground inches away from their feet), and appears to never venture more than about 30 meters away from the nest. It was one of the easiest rarity chases I’ve ever experienced, and as far as I know, no one who has looked for it has missed it. Anyone doing a Big Year in North America has probably seen it already. 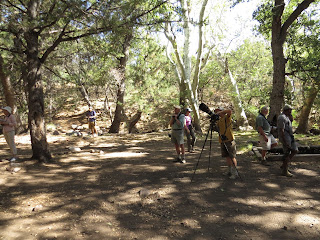 Key features in the ID are the large, teardrop-shaped eyering (much like that of Pacific-slope and Cordilleran Flycatchers), greenish tones to the plumage, and a rather narrow and relatively straight-sided bill with an entirely pale mandible. I also noticed the almost crested look and the longish tail that is somewhat flared in most postures. The call is also diagnostic, which to my ears sounds like a perky “pwip.” (This species also has a very distinctive song, but the fact that this bird has not been heard singing and is also building a nest indicates that it’s a female.) But it does resemble the call notes of several empids that have a call note that could be described as a “whit,” so I made a comparison of their call notes. I used recordings from the Cornell Guide to Bird Sounds: Master Set for North America for all but the Pine Flycatcher, and I included a second Pine Flycatcher recording that I made over 14 years ago east of Yécora just a few miles into the state of Chihuahua. It’s actually very difficult to tell some of them apart, especially Gray and Least flycatchers, but the call notes of Pine Flycatcher are maybe the most distinctive of the group. Click on the thumbnail below to bring up the full-sized image.

Amorpha fruticosa, False Indigo Bush was in full bloom in the mostly dry washes of Sawmill and Cave Canyons. 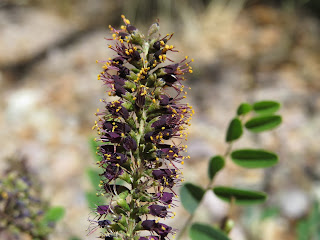 There was an abundance of these damselflies, Argia munda, Apache Dancer.

We took a very short detour up Cave Canyon to look for another megararity (though not as rare as Pine Flycatcher), a Red-headed Woodpecker that my friend Keith Kamper discovered exactly 4 weeks ago. There are something like ten records for Arizona, but I think only one of them may have been oversummering like this one. This is my second one in Arizona; I saw the one that wintered NW of Tucson in 1997-98. 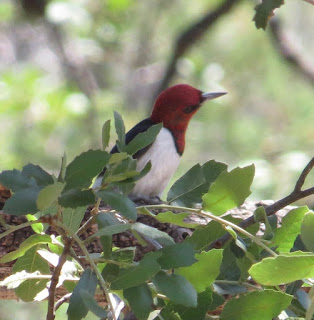 Steve Howell indirectly made me take this photo of a Turkey Vulture. Read his interesting blog on potential cryptic species in the Turkey Vulture at the Leica website, which he titled “Are You Watching TV?” 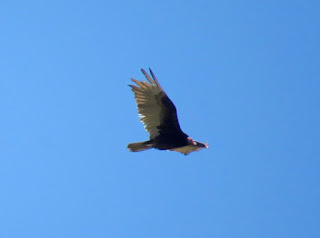 We finished the day at Madera Canyon looking for an Aztec Thrush that had been there a for few days, but some 30+ birders searching all morning had failed to find it, and neither did we. There had also been a vagrant Golden-winged Warbler seen in the same spot, but it hasn’t been seen again either. I came away from Madera Canyon with just one photo, this Aspidoscelis sonorae, Sonoran Spotted Whiptail. 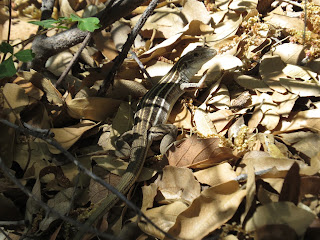 Finally, some news from the yard on Vine Avenue in north-central Tucson. My landlord and neighbor Paul discovered this Curve-billed Thrasher nest in the teddybear cholla that has apparently only just now reached the right size and shape. These or other Curve-billed Thrashers have nested in other chollas in the yard every year since I moved in exactly 18 years ago, and I think this cholla was a small plant then. The heat wave over the weekend has broken (down to 103°F from our high of 113°F on Sunday), but the adult still has to incubate the eggs during the middle of the day to keep them cool. 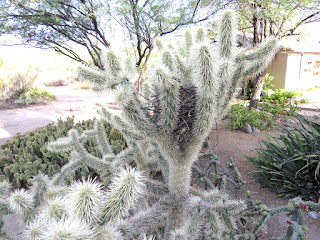 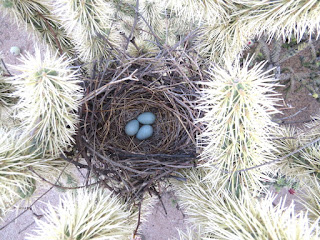 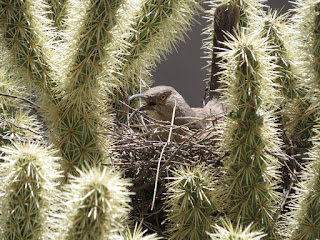 I’ve renewed my campaign to relocate the Round-tailed Ground-Squirrels that are starting to repopulate the yard, leaving holes in the ground and eating plants in the garden. They are totally diurnal, but I have to check the traps even in the early morning, as I’ve caught Abert’s Towhees in them twice over the years. Early this morning I found a trap closed and was surprised to find this Chaetodipus penicillatus, Desert Pocket Mouse, in it. This is a new mammal for the yard list, the tenth species we’ve observed here. 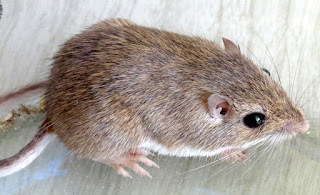 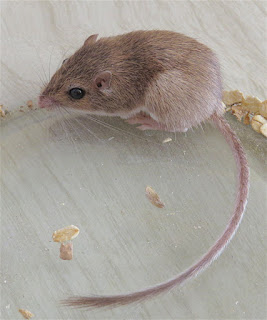 Posted by Birdernaturalist at 1:09 PM