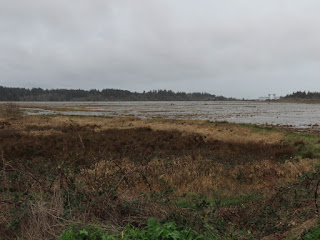 I participated on this wonderful southern Oregon coastal CBC on January 2 this year. It has the potential to have the highest species count in the state, but not with the kind of brutal wind we had this day. It would have been better if we had simply had the more typical winter rain, but then I would have had fewer photos. Still, I had a great day, joined by the manager of Bandon Marsh National Wildlife Refuge Kate Iaquinto and her intern Cherie Barnes. 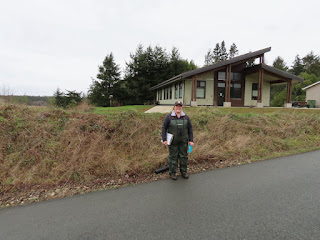 Because of the wind, passerines were hard to hear and reluctant to come out. We first tromped out into the Ni-les’tun tidal grassland marsh hoping for Savannah Sparrow, and we finally found three. 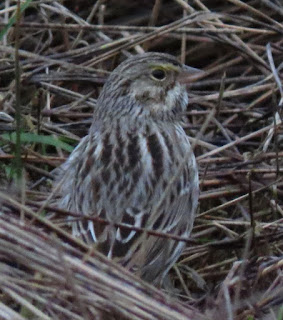 This habitat looked amazing, and I had fantasies of flushing a Yellow Rail or Black Rail from my feet. I could almost hallucinate hearing the chip calls of Sedge Wren or seeing a Nelson’s Sparrow scurry under a clump of grass. The only other little birds we saw out in the marsh were Marsh Wrens, and we saw several Northern Harriers dashing back and forth and a Peregrine Falcon speeding upriver.

In the very few Oregon Ash trees in our area I spotted a few Purple Finches, but all were the relatively drab females. 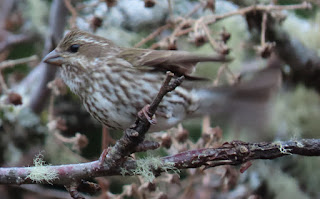 The constant wind made mixed flocks scarce, so during quiet times my eyes wandered to the ground. This super cool mushroom, related to morels, is Helvella verspertina, the Western Black Elfin Saddle. It may actually be a complex of poorly differentiated species; the understanding of species limits in mushrooms is about two centuries behind birds, but molecular work is speeding that up. 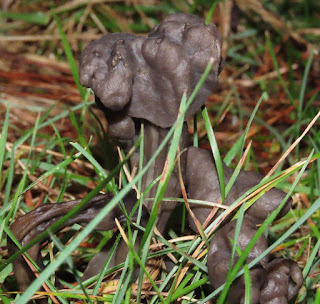 The refuge also has a small freshwater bog restored from a former commercial cranberry bog. It has been occupied by an incredibly active family of beavers, as evidenced by a well-worn trail and dozens of felled and utterly dismantled Red Alder like this one. 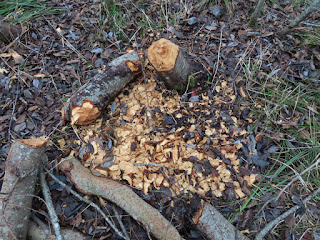 I actually did another CBC earlier this week – the Dallas CBC on December 29. (Again, this is Dallas, Oregon, not Texas.) But I forgot to put my SD card back into my camera and got no photos! I met up with my old birding friend from Tucson, Philip Kline, who now lives near Portland. We first birded the central buttes of Baskett Slough National Wildlife Refuge, followed by the Narrows. Later in the morning, my neighbor friend Thomas Meinzen and his girlfriend Molly Burchfield joined us (don't worry, we were all in separate cars and regretfully abstained from hugs), and our best bird of the day not long after was a Gyrfalcon, a bird known to be in the area but hardly a “stake-out.” It roams a very large area, often well north of us, but we were on Coville Road in the middle of the refuge when it stormed in, flushed a flock of Canada Geese (which it has been seen catching and eating earlier this month). I wouldn’t have been able to get a photo anyway. We also picked up some White-throated Sparrows and the count's only Brown-headed Cowbirds in the town of Rickreall.
Posted by Birdernaturalist at 7:00 AM