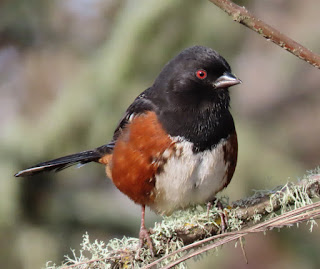 The Eugene CBC is now my “home count,” as I live just 2.3 miles from the circle center (a CBC circle is 7.5 miles in radius). Last year I was in Brazil, so I missed it during my first winter in this house. It always gets the most participants of any circle in the state, including a huge number of feeder watchers, and ranks high nationally as well. This year, despite the pandemic, the organizers still managed to have 140 people in the field and 119 counting at their home feeders, the latter a record by 8, which is not surprising during this pandemic winter.

The rules regarding CBC conduct during the pandemic meant that I got an area to cover by myself, which was actually a good thing this year, as I didn’t really know it well and wouldn’t have known how to divide and delegate had I been given a larger group. I probably spotted some birds only because I was on my own but am also quite confident that I missed even more. You always see more with more eyes watching in all directions – everyone also has their own, unique pattern-spotting abilities and search images. I missed Peregrine Falcon, Merlin, Cooper’s Hawk, and Red-shouldered Hawk, for example, and I wouldn’t be surprised if all of these species saw me.

Having said, that I enjoyed the spontaneity of deciding where I would linger, when I would continue, which side road I might turn down at the very last second, and being able to get around by bike. All of those would have been more difficult with a group.

The Spotted Towhee at the top was one of 87 that I had during the day. Yes, I had a lot of blackberry thickets to pish at, and I pished a lot. How about 197 Song Sparrows, 110 Fox Sparrows, and 53 Bewick’s Wrens? 83 species and 2878 individuals were the grand tally from my area, making it the most diverse on the CBC.

My first bird of the day was actually a Western Screech-Owl at a park just ½ mile south of my house, one that I had seduced into calling in broad daylight during eBird’s October Big Day. It was in the same trees pre-dawn this morning after coffee #1, and soon I was back home for breakfast and coffee #2. One of the first songbirds I had shortly after sunrise though was this Swamp Sparrow that I had found over three weeks ago just barely into my CBC sector, exactly 1.8 miles and 10 minutes from my house, mostly by bike path. To give you an idea of how good the bicycle path system is here in Eugene, to get to this location by car would be a 4.2-mile, 10-minute drive, followed by a 4-minute walk. 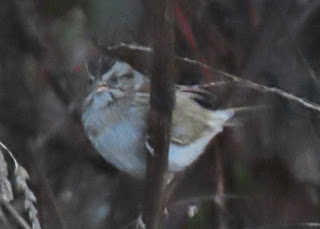 The best birding in the area I was assigned lies on the east bank of the Willamette River and west of Delta Highway and continues north from the Beltline Highway to the Mackenzie River, including special permission to bird private gravel pits right up to the confluence of those now very swollen rivers. I also have all of suburbia east to I-5, but it’s not as rich in habitat or birds. I had a mix of older stands of cottonwood and younger thickets of willow and alder, but also some grassy fields and tons of blackberry thickets. My big species list of 83 benefitted from a good diversity of ducks on three main gravel pits (as well as one grebe, cormorant, heron, and coot species each), and a spotting scope was necessary as some ponds were big and I couldn’t safely get very close to this most of this one. 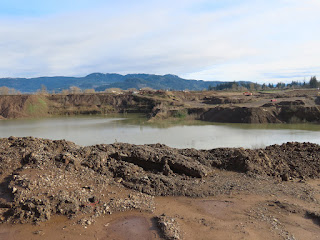 This is the Mackenzie River just east of its mouth. 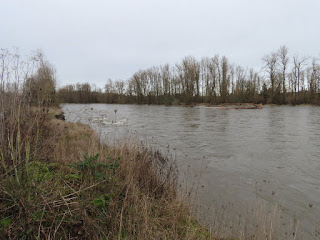 Here’s my bike by a field that had a Western Meadowlark, several Lincoln’s Sparrows, and a Wilson’s Snipe. Note my tripod sticking out of the pannier. 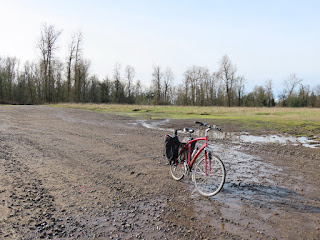 Even though my tendency to rely too much on my ears had me missing some raptors, Red-tailed Hawks are too common to ignore. It’s courtship time already in January here in mild western Oregon, as evidenced by these lovebirds. 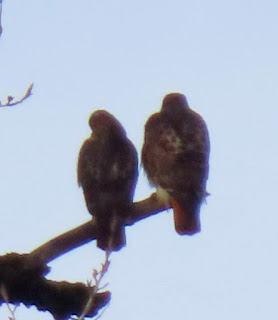 The riparian woods had plenty of Downy Woodpeckers, and this year’s CBC had a record number. I had 14, contributing to the count’s amazing total of 180 (which pales to the numbers found on eastern US counts, but it’s a lot for here). 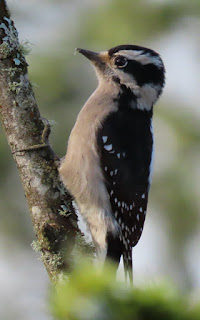 House Finch is common bird here that we don’t really pay too much attention to, but I rarely have such a nicely colored male perch in good sunlight. 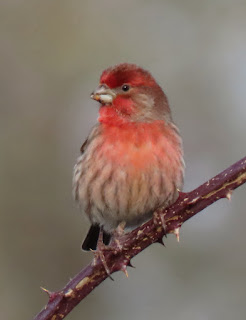 I did not have what you would call typical Wrentit habitat, but the dense, non-native blackberries along the Willamette River are continuous for miles in some areas, and in recent decades they have expanded their range into this habitat. Learn to whistle like their song, and you’ll find they are very gullible and come right out. Since discovering that I no longer use recordings to find them. I found two Orange-crowned Warblers, one palling around with a flock of Bushtits, and the second one a third of a mile away with a flock of Dark-eyed Juncos. The first was of the subspecies lutescens, unlike the gray-headed one (probably orestera) that was at my feeders for much of December, was gone for two weeks, then reappeared at my bananas a couple days ago. But this second one looks somewhat intermediate. It’s not a very common species here in the winter, and only a total of six were found by all teams. 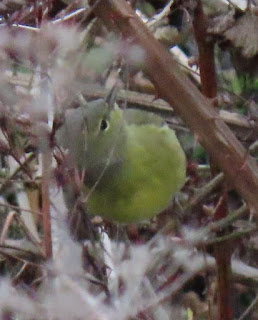 I thought this Common Yellowthroat was going to be my one and only true rarity. It was indeed the only one for the count, but the species is found about once every five years here. They are common in the winter not too far south of here in California. 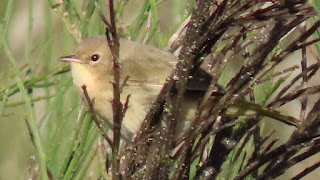 Since I had never been here before, I came across this very different gravel pit in the mid-afternoon as I was about to leave the area. It’s older, shallow, and wall-to-wall cattails (Typha latifolia). I gasped when rounded the corner and saw this, as it is perfect habitat for rails and could have something even more unusual. So I first did playback for the only species that is common here in winter, Virginia Rail. I instantly had two responding, and later I heard two more. But this habitat also screams Sora to me, so I played that and had an instant response from one. I tried again from a different side of the pond, and one from the same location called back, followed by one from right in front of me. Since this species has been recorded on only 1 out the past 50 years, it’s my officially rarest bird for the day, though it’s also surely vastly under-detected. 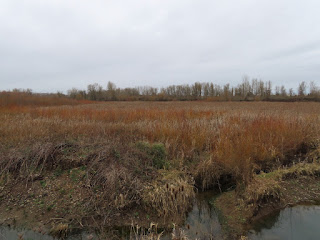 I used the later afternoon to cruise the mostly rather new suburbs of NE Eugene, trying to stay on smaller roads. I found American Goldfinches feeding in an older (and non-native) sycamore tree, and I certainly boosted my Anna’s Hummingbird tally. But eventually I learned that no back roads connected through to the eastern part of my area, and so I was just pedaling along on the busier Ayers Road when I saw four swans in flight up ahead as I looked through powerlines and the numerous sweetgum and other obnoxious, non-native trees. I stopped quickly but didn’t even raise my binoculars as I know that there are two species possible. Instead I was ready with fast shutter speed and a positive exposure compensation on my camera when they emerged into open view. My first impression looking at my camera’s screen was confirmed in the evening when I zoomed in on the photos on my desktop computer. Trumpeter Swans! They have a larger bill than the much more abundant Tundra Swans, and the lack of any “pinch-off” between the eye and the bill is also distinctive. It’s a rare bird in western Oregon, with only a few dozen each winter in select localities, but very rare in the Eugene CBC circle with only four records in 50 years. 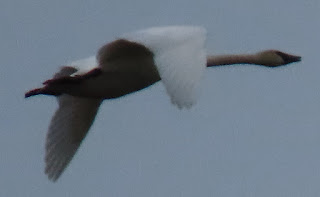 I’ve heard that the total species count was 133 species, which is the sixth highest ever for this count, a remarkable total, considering the situation. The weather was unbelievably beautiful – calm, sunny, and warm for mid-winter (54°F). Clouds moved in mid-afternoon, and at about the time one should think about finishing up for the day, 4:00 p.m., it began to rain, and the decision was made. Perfect. It was a great day, but I missed the camaraderie of birding with a group, sharing fun sightings, and getting together at the end of the day for the countdown dinner. Next year. January 2, 2022.
Posted by Birdernaturalist at 6:00 AM