We woke up this morning in Aguas Calientes (the tourist village below Machu Picchu) to rain. By the time we were ready to start birding, by just walking down the road from the hotel, it was only a steady, but light shower. Birds were active, but it was at times a bit difficult to see them. It gradually improved and after about an hour, it began all but stopped. Weather got better all day. 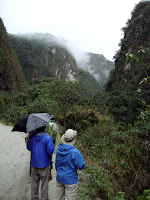 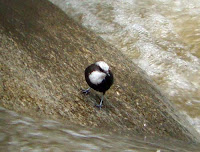 Torrent Duck female (There were also a male and three young nearby.)

A Bird's Nest-type fern. Perhaps an Asplenium species. (Update: it's a Nephidium, see Brad's comment below -thanks Brad!) 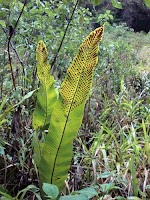 These liverworts on a most rock had these cute little parachute-like fruiting structures.

We watched hummingbirds at feeders in a well-planted hotel garden (seven species dominated by Chestnut-breasted Coronet), and this strange plant caught my eye. It reminded me of a Phyllanthus from Jamaica, but I'm not certain that's what it is. 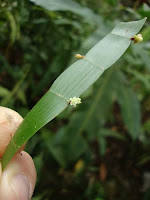 We had 50 minutes to do some shopping in town before boarding the train for Cusco, and I did my friend Beth a favor by getting her one of the orange rugs made from Alpaca and Llama, and dyed with natural colors. I wasn't sure what she wanted, so as soon as Gary cut everyone free, I rushed to the market, took some pictures, went back to the hotel, uploaded them to my computer and e-mailed the photos to Beth. Then I called her with Skype, told her to check her e-mail, and got her OK for this $50 handmade rug. I think she'll be happy. 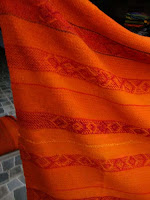 We then took the 3 1/2 hour train ride to the station of Poroy, a few miles short of Cusco.

Some clever marketing hack came up with the idea of selling the tourists on the train high-end Alpaca garments. And they have the attendants stroll down the aisles like a fashion runway. Some sort of fashionable pop mix was playing, and the passengers would applaud each time they strolled by. The sweater worn by the guy was about $165.

Tomorrow we have breakfast at 4:30 and then head over the last crest of the Andes to begin making our way down the wet slope on the Manu Road. Almost certainly no Internet tomorrow.
Posted by Birdernaturalist at 7:18 PM