This itinerary gives us two full days to work about five miles of road full of specialties. On our first day we had a pre-dawn breakfast at our hotel, Manu Paradise Lodge, and headed just ½ mile up the road to the most famous Andean Cock-of-the-rock lek. We spent about ½ hour here in a wooden observation platform with many birds screaming, displaying, and chasing just several yards in front of us. We even witnessed a successful copulation. The whole thing was quite stunning.

The rest of the day’s birding was along the road in lush cloud forest, dripping with exciting birds. 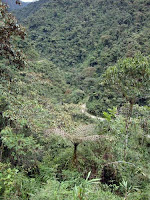 One of the rarer finds for the day was this handsome little puffbird, Lanceolated Monklet. It appeared to be possibly nesting somewhere in the mossy slope below. 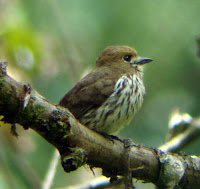 And a real prize was this female Lyre-tailed Nightjar roosting on a roof. We also went out at sunset and watched a male with a tail even longer than that of the Swallow-tailed. Crazy beautiful.

About mid-day we departed Manu Paradise Lodge, which was quite a pretty place. 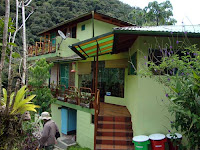 The gardens here were lovely, and this blooming orchid was along the path. 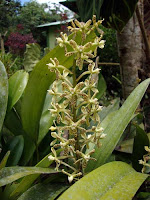 Several bushes of Stachytarpheta provided a good attractant for hummingbirds as well as this euglossine bee. 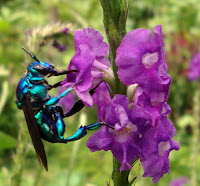 Again, with such great weather, butterflies were out in force. 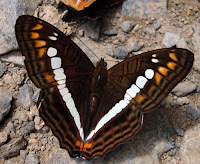 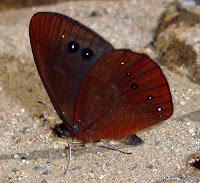 And even more Perisamas: this Perisama comnena was interested in something on my spotting scope. 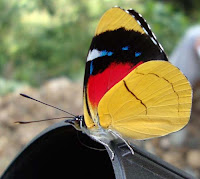 Here is the upper side of the same individual. 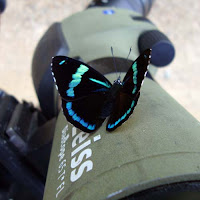 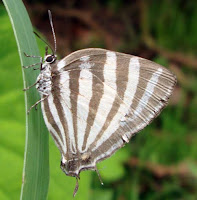 This damselfly, at a clear, mountain brook was most stunning in flight. It would perch unnoticed for a few moments, but the entire upper side of its wings shimmered an iridescent blue when it took flight. Two of them looked like little blue fairies dancing just above the stream. 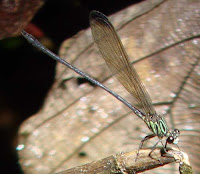 One of the great bird highlights was hearing several Hooded Tinamous and one Black Tinamou, singing its haunting, down-slurred cry all morning long from the opposite side of the rushing river below. Booted Racket-tail, Versicolored Barbet, Buff-browed Foliage-gleaner (heard while we were waiting for the Lyre-tailed Nightjar to appear), Yellow-breasted Warbling-Antbird (a bamboo specialist), Scaled Antpitta (heard only, of course), both Western and Eastern Wood-Pewees (migrants from North America), a kettle of 75 Swallow-tailed Kites, White-eared Solitaire, Orange-eared Tanager, and Black-faced Brush-Finch were some of the other highlights from today.

Posted by Birdernaturalist at 7:57 PM