The main focus of this tour is the road that descends the humid slope of the Andes along the eastern border of Manu National Park. As it covers the full range of altitudes from treeline to the Amazonian lowlands (and over a very short distance), it is one of the most bio-diverse national parks in the world, perhaps occluded only by Madidi National Park in Bolivia.

But getting to the start of that nice, moist forest requires quite a drive, and we had a full buffet breakfast at 4:30, departing the hotel at 5:00. And not to waste any of the best hours of birding, we made several stops as we passed through the dry, high interior Andes to the north of Cusco.

Our first stop after about an hour and a half was in the outskirts of the town Huancaraní. Typical of the highlands, much exotic eucalyptus and pine have been planted, which mostly does not do the native birds any good.

But here we found our main target, the local endemic Chestnut-breasted Mountain-Finch. 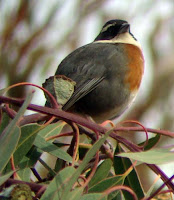 Other birds common here were Rufous-collared Sparrow and Black-throated Flowerpiercer.

We made a few more stops in the open, seemingly birdless expanses of desert-like habitat.

But looks can be deceiving – there are many interesting species found here. Here is a Slender-billed Miner, one of our targets.

Other birds in this area were Rufous-naped Ground-Tyrant, Black-billed Shrike-Tyrant, and Rufous-webbed Tyrant.

Here is a very low-growing cactus with a lovely bloom. The long hairs, prevalent on many high-altitude species, offer protection from the many nights when the temperatures drop well below freezing.

This Rhionaeschna species of darner dragonfly was at a small stream by the road.

We only paused for photographs of this interesting site, the Chullpas of Ninamarca. The small stone huts are burial tombs of ancient native Andeans.

The sun and moon rose side-by-side at 5:19 this morning, and I wondered if somehow the moon deflected some of the sun’s rays to cause this very strange double ring. 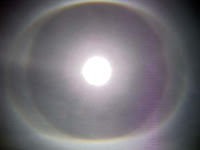 After crossing over the Cordillera de Urubamba we skirted the upper ends of several valleys and then rose to the top of the Cordillera de Paucartambo where we had our picnic lunch. This marks the limit of Manu National Park. 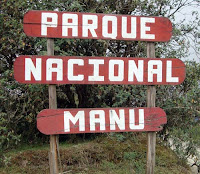 The habitat was abruptly different here, with frequent mist and fog creating a lush, dense growth, interspersed with tussocky grass. Luckily we had sun, so some interesting butterflies were out, such as this Cloud-forest Firetip, Metardaris cosinga, on a Baccharis. 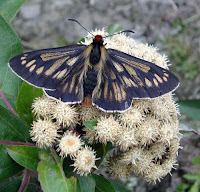 One of the characteristic plants of this edge of cloud forest and páramo is the Puya, a large, terrestrial bromeliad with striking green flowers. 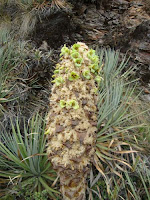 Many other flowers also caught my attention:

A Fuchsia, one of many species 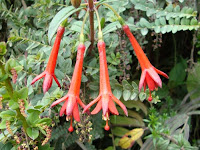 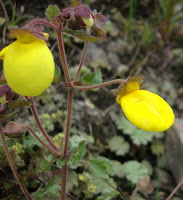 The family of this tubular yellow flower wasn’t at all obvious to me. Maybe Solanaceae?

This looks much like the Polygala native to southeastern Arizona, only the flowers here grow on a large bush.

This melastome, unusual in its tubular flowers, was very attractive to the several species of hummingbirds in this area, such as Shining Sunbeam and Amethyst-throated Sunangel. 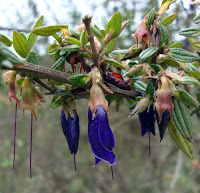 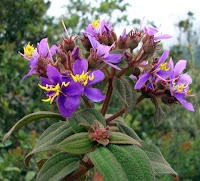 Another family that I couldn’t recognize, this flower was common in the moist grassy areas. Maybe a gentian? 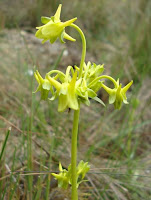 Even northern hemisphere genera occur here, such as this Viola. 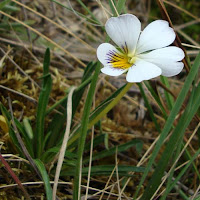 The orchids were simply amazing. Here are few, starting with the only one that looks familiar, much like Epidendrum secundum. 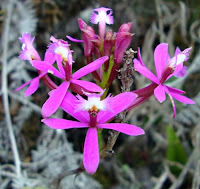 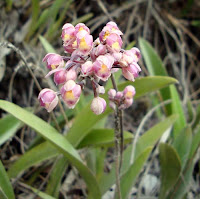 The most spectacular flower here, and also much loved by hummingbirds, is this Oreocallis – King Beauty, as I would translate it – in the Protea family. 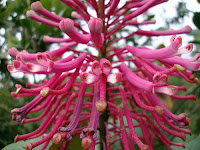 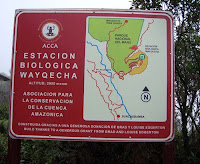 In the late afternoon, we arrived at our lodging for one night, the Wayqecha Biological Station. Here we met two young Americans working as biotechnicians on a study of nesting birds. And we walked up the road at dusk to have a fantastic experience with Swallow-tailed Nightjar. The male flew over us in a display flight like a giant mayfly in the cloud forest sky. Other bird highlights from today were Creamy-crested Spinetail, Golden-collared Tanager, Puna Thistletail, and Rufous-capped Thornbill.

Posted by Birdernaturalist at 3:37 PM