A Hobbit in the Garden

Well, it does live in burrows in the ground, but from its behavior it might actually be an ogre. Or maybe even Gollum. (Can you tell that I just got back from seeing the Hobbit in 3D?) It's actually that pocket-gopher I mentioned in a previous post. 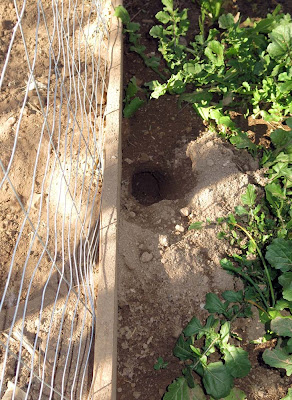 This is what it's been doing recently. Just a hole with finely churned soil around it. No damage, but I knew something was coming up. So I tried flushing it out last weekend. I put the hose down the hole and turned it on. Slow at first, and it quickly washed the loose soil down into it. Then turned it up, to maybe 3 or 4 gallons a minute. And left it there for maybe...2 hours? Nothing. Where did all that water go? (My landlords aren't going to be happy with the water bill this month.) I fully expected a drenched rodent to surface somewhere, water bubbling up from unknown access points to the tunnel network. But nothing. The next day there was a plug of newly churned soil in the hole.

Then today a saw the first victim – a wilted arugula plant. 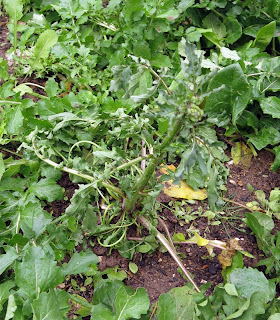 Sure enough, the root was severed just below soil surface. 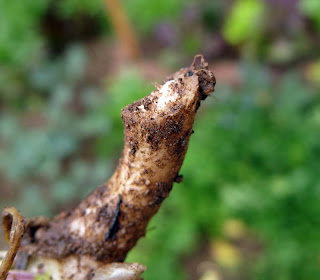 Well, I needed help with the arugula in any event. I've been on a campaign to eat it three times a day lately, just to keep up. Sauteed and braised for a bed under my breakfast soft boiled eggs (the new steamed method from Cook's Illustrated – 6 1/2 minutes in 1/2 inch of boiling water in a covered saucpan. Perfect.) Salad for lunch and dinner. It's good stuff. The arugula (rocket to the Brits) is the dense, impenetable patch on the right. 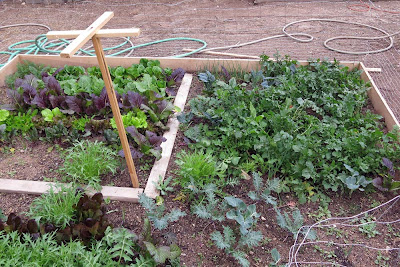 This part is dominated by mizuna, a mild Japanese mustard good raw in salads and sautéed. There's also some red giant mustard, Russian kale, a row of lettuce, some broccoli, and some parsley. I swear it all added two inches as a result of the winter rains we had the past couple of days – totaling nearly an inch of precipitation. Fabulous. 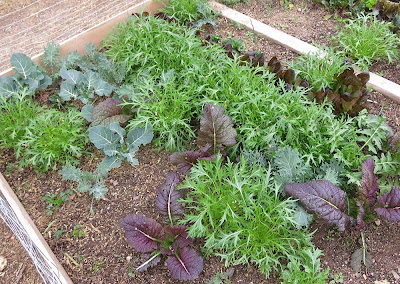 One more photo – a tiny moth on the screen door in late January. Turns out my friend Margarethe Brummermann had one the same day, which she posted to Bugguide, my source for the ID. It's Iridopsis obliquaria, a geometrid whose caterpillars (inchworms) feed on Soapberry. Winter is a good time here. 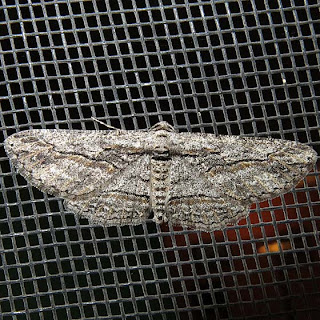 Posted by Birdernaturalist at 9:19 PM