The Portal CBC was my sixth this season. Jackie Lewis, the compiler got word that I would be willing to hike up steep mountains, so she assigned me to the Silver Peak trail. I had never been there and was looking forward to seeing what the habitat was like. The trailhead is right on Portal Road, just up from the US Forest Service center at the mouth of Cave Creek Canyon. The trail winds up through the semidesert grassland at the lower edges of the oaks, then up around the right side, and ascends to the peak on the NE side of the mountain. My birding partner for the day was Steve Schmidt from Santa Fe. He had done this area last year and it was good to have someone who knew the route and interesting to hear how it compared to last year. We had a lot more birds this year, it seems.

One of our best birds was a Montezuma Quail that responded to my whistle. Normally, when you whistle like a female, the male follows immediately with one downslurred buzzy whistle (the song), which you can hear from nearly 200 yards away, maybe even farther. If you keep whistling, he will either walk or run towards you, and once I even had three or four males fly in and land in front of me and my friends. Once they get close, you can hear a very soft, low growl that they give when very excited, but they have to be within about 25 yards for you to hear that. This time, after I had whistled just once, I immediately heard that growl, and it was close! I would have guessed no more than 10 or 15 yards away, but as soon as we started to move, it was most surely so close that he went into "crouch mode." I figured we'd then have to walk in a very tight spiral to cover every inch in order to flush him (some won't fly until you practically step on them), and that wasn't a good use of our time. We still had 4 1/2 miles to go with a 3000-foot elevation gain – and then hike back.

On the way up we had many flocks of Chipping Sparrows and Dark-eyed Juncos, with Mexican Jays, Western Bluebirds, Bewick's Wrens (lots), Townsend's Solitaires, and Hutton's Vireos in the Red-berry Junipers (Juniperus coahuilensis) and scattered oaks. At one point this Sharp-shinned Hawk soared overhead (taken with my point-and-shoot held up to my binoculars, so forgive the quality). 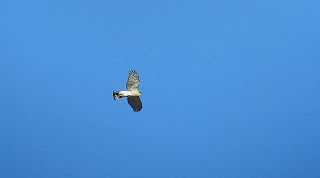 As we got higher, we entered Apache and Chihuahuan Pine-filled draws and eventually into stands of Douglas-fir. About 1/2 inch of snow was on the ground from a quick front that passed through three days earlier. It was very quiet birdwise, but my persistent owl imitations and pishing brought in a few mixed flocks. One flock consisted of about 40 Ruby-crowned Kinglets that descended upon us within a few seconds, and then one minute later was gone. It was an amazing sight. There was at least one Golden-crowned Kinglet in this flock, and this one plus another couple that we had later on were the only ones on the CBC. We also had a couple Mexican Chickadees in one of these flocks. Another mixed flock up at the top had a passel of Bushtits (always in prime-numbered aggregations, did you know?) and one Mexican Chickadee.

The view from the top was glorious. Silver Peak is a prominent, isolated peak just to the east of the main Chirichahua massif. This view looks to the west-southwest over the Cave Creek basin. Below and left of center is the Southwestern Research Station. The main draw in the center of the photo, leading up to the right, is the main fork of Cave Creek leading up to Herb Martyr campground. Rustler and Barfoot Parks are hidden behind the highest ridge just to the right of center. The famous South Fork Cave Creek is behind those steep rhyolite cliffs at the far left.

This is looking northwest with Paradise down in the valley and the Pinaleño Mountains barely visible in farthest distance. 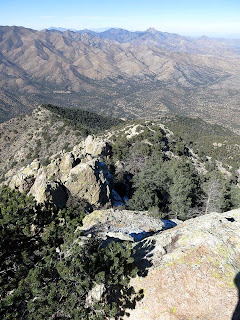 This is looking southeast to the Animas Mountains, the only other mountain range in the US with Mexican Chickadees. 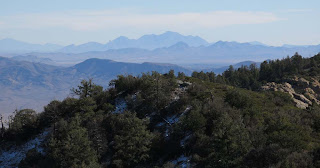 The plant life up here was interesting. Here is Steve standing in a patch of rather dwarfed Point-leaved Manazanita (Arctostaphylos pungens). 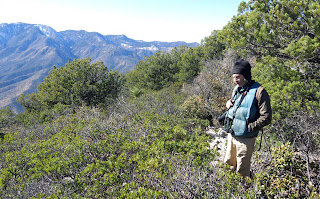 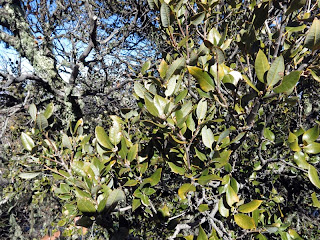 Two kinds of yucca were here as well. The common Mountain Yucca (Yucca madrensis) is all over these mountains (formerly known as Yucca schottii). 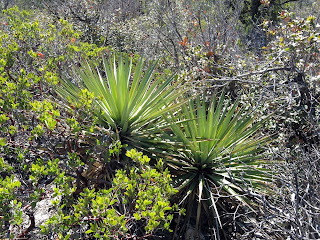 But I was a bit surprised to see the Banana Yucca (Yucca baccata), which I know from lower, more desert-like areas. Note the curved leaves with filaments stripping off the margins (ideal Scott's Oriole nesting material, by the way). 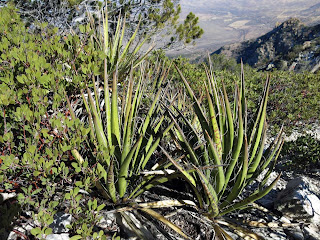 I look forward to returning here, I hope during a warmer time of year when the butterflies will be hilltopping.

Posted by Birdernaturalist at 7:37 AM