The Atascosa Highlands CBC is my favorite. It's a magical, mysterious, and enigmatic region of complex biogeography to the west of the border town of Nogales. The southward draining canyons stand out, as most of Arizona's waterways flow north then west out the Gila and Colorado Rivers. Here, Sycamore, Tonto, Warsaw, California, and Holden Canyons eventually connect with the Rio Magdalena to drain into the Gulf of California much farther south.

I'm also compiler of this Christmas Bird Count, since 2008, and am helped by my co-compiler Jake Mohlmann. I could go on and on about the virtues of this circle, but I reserve most of that for the blog I keep for the CBC.

I had just done the Patagonia CBC on Thursday, December 20, staying overnight there with my friends Liz and Linda, and had the bulk of the 21st to scout the area and decide on a place to camp. I intended on waking up early and looking for owls.

My scouting took me to some unbelievably scenic areas. I drove down the Summit Motorway to the edge of the circle and noted that much of the oak-covered slopes had survived the June 2011 Murphy Complex Burn.

I also did the long loop down Warsaw Canyon Road and back up the California Gulch Road. I made a few birding stops and noted a heard Gambell's Quail right at the international border and a Northern Beardless-Tyrannulet on a slope that in summer has Five-striped Sparrow. The former ended up being missed on the count.

This view is looking north from what I call the Ruby Divide – from here the canyons flow north into either Peck Canyon or Arivaca Lake, while behind me they flow south into California Gulch.

I ended up camping in the same spot I have in the past, pitched my tent and decided to forego reading or knitting in the dark and chilly night and went to bed at 6:30 p.m. I woke up a few times, as the moon was bright and the thermal pads too thin, and the silence was baffling. There wasn't a breath of wind, and I was so far from any human activity that I had to rustle my sleeping bag to convince myself that I hadn't gone deaf. I finally gave up waiting for my alarm to go off at 3:15, got up at 2:50, and began my owling efforts. Within the next hour and a half I had heard 4 Western Screech, 6 Whiskered Screech, and 1 distant Great Horned Owl. At one point I was listening to four Whiskereds and 1 Western while standing in one spot.

This is a view looking east to the Atascosa Mountains over the area where I camped and owled. 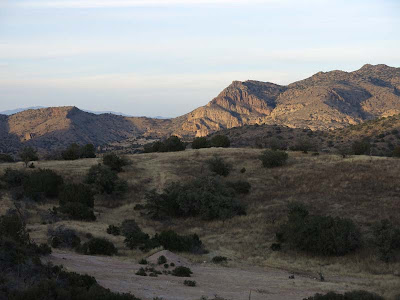 At dawn I met up with Max Li and was surprised to find he brought a friend, Kimberly Baeza, to join us on the hike to Pine Canyon. We made a good team for this long, somewhat difficult, but stunningly beautiful hike. 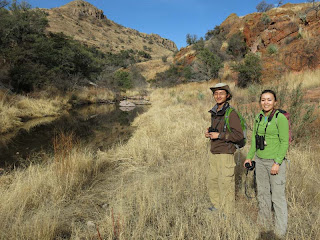 There is one spot where you have to hike up and over the hill to avoid an impassible box (a narrowing of the canyon with sheer cliffs and a pool of water at the bottom). 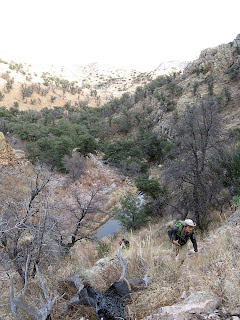 Compounding the difficulty was the abundance of water where two weeks earlier there had been none. It must have rained quite a bit in the storm that passed through here in early December. 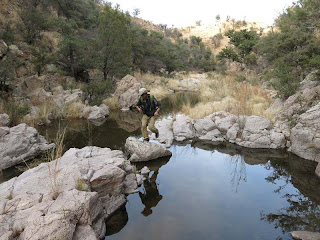 If it had been this wet here all fall, we might have seen Wilson's Snipe or Swamp Sparrow in a spot like this, but we saw little more than a Lincoln's Sparrow here. 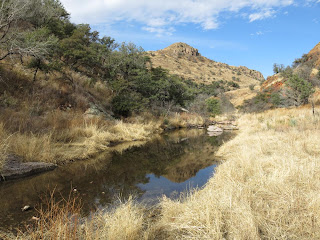 Some of the red cliffs on the way up Pine Canyon, highlighted with chartreuse lichens. 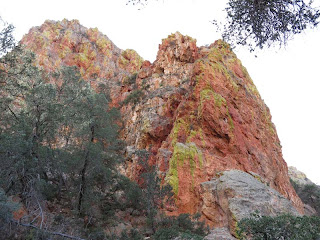 We finally got to the main part of our area around 12:30, the only stand of Chihuahuan Pines in the entire circle. 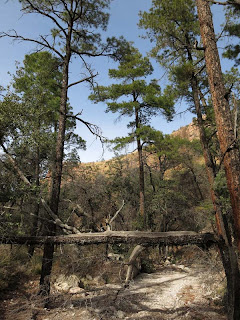 And here we relocated the Elegant Trogon that Jake, Alex and I had found here in early December. This is a poor digibinned shot of that bird, a young male. The CBC ended up with a total of six, by far the high count for the country this year. 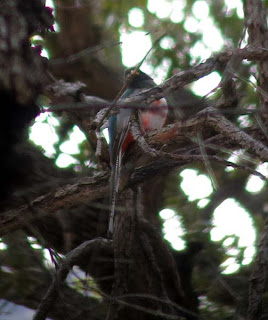 We also found a White-throated Sparrow, which I was certain was going to be a scoop for the CBC until we got to the countdown and learned that another 4 had been found by other teams, a record for this CBC. This photo is actually of the one at Peña Blanca Lake, which I saw a few days after the CBC. 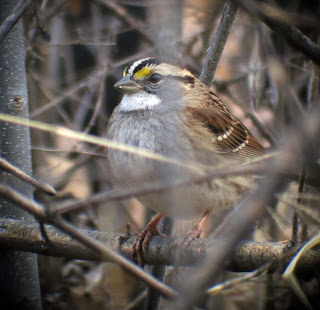 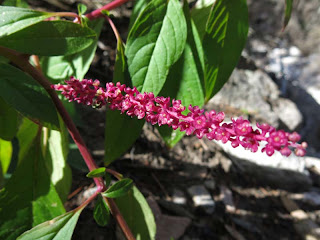 The day's birding culminated at Widsom's Cafe in Tumacacori for the species countdown. I read down the species list, each team chimed in with additional species and highlights, and we arrived at a total of 141 species, 2 more than the previous high count in this CBC's 52-year history. Then after almost everyone had left, John Reuland of the Lower Sycamore Team finally arrived, dropping of his list and adding Five-striped Sparrow – number 142! Thanks to Celeste Wisdom for this photo of the countdown. 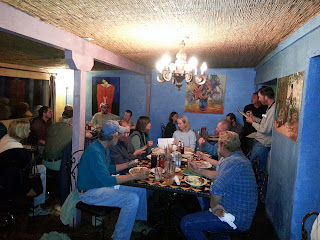 Posted by Birdernaturalist at 4:00 AM