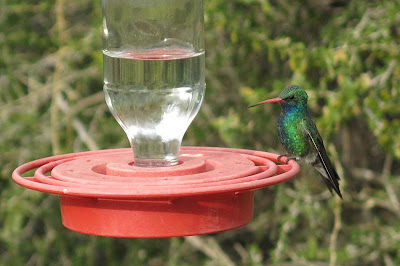 There's one feeder in particular that everyone wants to feed from. Problem is, this feeder has been considered the personal property of a Broad-billed Hummingbird for the past six weeks or so, and he's very diligent about chasing off any intruders.You can see the metal band on this bird's left leg, a subject in an urban hummingbird study by Larry Norris. Larry was here for six banding sessions starting in early November 2012 and during those visits banded 80 birds and recaptured about a dozen others that he had banded in previous years at a nearby station and one from another banding station almost 55 miles away! Keep in mind that at any 2-hour banding session we didn't come close to capturing all the birds that use the feeders during those two hours, let alone during the course of a day. At the last banding session, there was a Broad-billed who kept every hummingbird away from this feeder (and out of the trap) until he finally went in himself and acquired this bling. I suspect it's the same bird.

Why is the one feeder so busy compared to the other 19 available in our and the neighbor's yards? I'm guessing that it's the feeder's visibility and approachability as well as the availability of many perches in the wolfberry (Lycium) bush next to it that make it hard for one hummingbird to defend, so eventually he must give up. Then the rest sitting in waiting descend upon the feeder all at once. I took this series of photos three hours ago this morning, but even right now I'm looking at 7 birds sitting on the feeder at once. In this first photo you can see the Broad-bill off to the right, flummoxed. 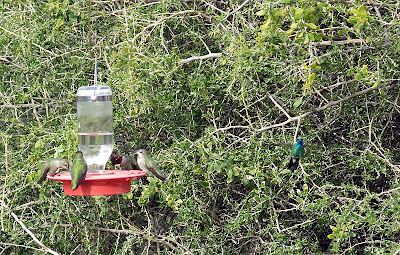 But most of the time it's a wild show of chases, bickering, and individuals sneaking in a quick sip while he's chasing someone else away. And when he's gone for a few moments, there's a male Anna's Hummingbird who tries to hold sway. All of the other feeders also have a bird defending them, but their owners seem to have better success at keeping intruders at bay. 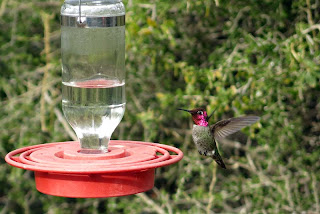 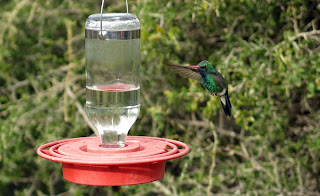 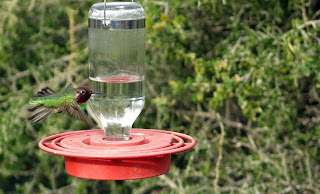 But I noticed a couple individuals who stood out. One is a female Broad-billed Hummingbird, a scarce bird in the yard (I have had somewhere from 10-20 Broad-bills in the yard all fall and winter, but all are males). She won't take crap from this Broad-billed, holding her ground in the bush or at the feeder, but not wanting to take part in the bullying herself. 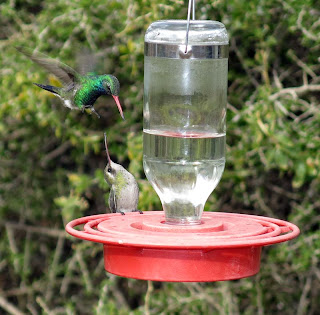 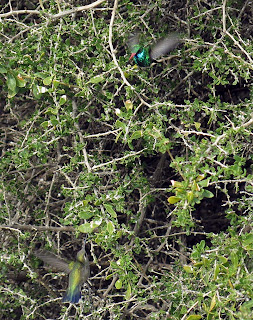 The other is a shy immature male Costa's Hummingbird, also not a common bird in the yard. I saw him attempt to feed several times, getting chased by the male Broad-billed when he even thought about approaching the feeder. 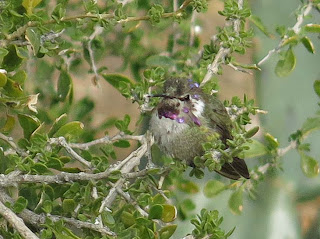 Finally he had his chance when buffered by other hummers taking the brunt. That's him on the right. On the left is a female Anna's and the middle bird is a male Anna's. 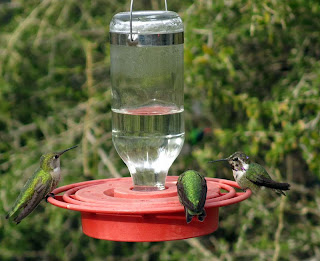 These two photos of the same male Anna's Hummingbird show how the red color you see is structural and not caused by pigment. Without light being refracted and directed towards you in just the right way, the feathers of the "helmet" are actually black. 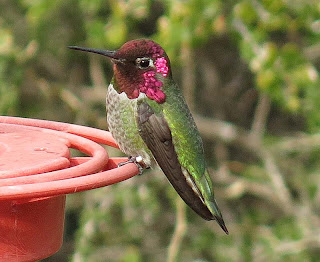 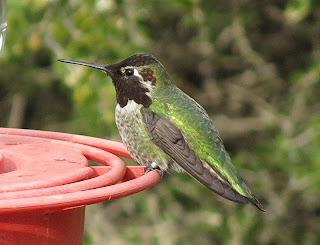 Just a few miles away, my friend Margarethe Brummermann has been seeing some agressive behavior among the Costa's Hummingbirds at her feeders, including a male who seems to be taking advantage of the desperately hungry female. See her blog here.
Posted by Birdernaturalist at 12:33 PM